Game of Thrones in Southern Spain — A Pre-Filming Dates & Spoilers Roundup | Watchers on the Wall | A Game of Thrones Community for Breaking News, Casting, and Commentary

As filming wrapped up today in Zumaia and the entire Basque Country, the juggernaut that is the Game of Thrones production moves south to Seville, Córdoba and Cáceres. Many in the community have been asking questions about the relevant dates. In this report, we provide you with any and all information we have on these shoots, including a few new pieces of information, all gathered together for your convenience, and warm you up for filming in the sunny side of Spain, which takes off on Tuesday, November 1st.

There is a lot of overlap between location dates, but production doesn’t equal filming. Consequently, our best estimates as to where and when actual filming commences down there would be on November 1st, continuing for half a month in Andalusia alone. Extras will be needed there between the 1st and 12th, all of them men —That is, likely soldiers.

Taking only part of the weekend and Monday off to prepare, this coming Tuesday filming will likely begin in the amphitheater of Itálica, shown in all its glory at the top of the article. We are pretty sure of its purpose, which is something we cannot claim for any other location. In all likelihood, the remains of this almost 2000-year old gladiatorial arena will depict the ruins of the formerly great Dragonpit in King’s Landing. The Targaryen dragons lived here for many years —Until they all came to a horrific end.

These ancient ruins, near modern Santiponce, have been closed down for two weeks now and will remain shut until November 12th, and that is because preparations were extensive. So extensive, in fact, that there were more than 400 technical staff involved. Aside from the hundreds of props brought in to make the ruins look even more ruinous, the production built a platform over the wide central opening in the amphitheater, used in ancient times to harbor the “entertainers” before they ascended to the arena. The narrow channels that lead to this underground area remain open, though staircases have been put in place there leading to the new elevated central podium.

Adjunct to Itálica there will be a brief shoot in the nearby city of Seville, in particular at the “Atarazanas Reales” or Royal Shipyards, which will also perform as the Dragonpit.

So, what events should we expect in this famous King’s Landing ruin? We don’t know much about what will happen, but we are certain that many if not most of the main characters of Game of Thrones will be present in this fateful scene, including the likes of Dany, Missandei, Davos, and Brienne. We can confirm there will be many others.

Next up in Andalusia, we find the Almodóvar del Río Castle, in Córdoba, which will be closed from November 4th to the 16th, though filming will only take place for a week, possibly between the 9th and the 15th. This may be the most confusing location yet: The interior (which is where they will actually shoot) is quite cramped, and there is a mixture of architectural styles, some of them modern. Whatever this Muslim-built castle may end up being in the story, we suspect it may be a recurring location. Three directors visited the site: Jeremy Podeswa (director of the premiere and the finale), Mark Mylod (who directs episode two at least) and Matt Shakman (in charge of episode five.) Remember: This season will only have seven episodes directed by four men.

Production will travel west from Andalusia to Extremadura, to its Cáceres province. The initial casting call for extras required them to be available in Cáceres city, Trujillo or Malpartida from November 14th to December 15th. However, a newer call for extras sought people for the longer period between October 31st and December 12th. The discrepancy may exist because this month and a half of filming appears to apply to the entire province, while the shorter period may exclusively be about Malpartida. Interestingly, Cáceres is the only region asking for women too, which means we’ll see some civilians as well as soldiers in Cáceres city and perhaps Trujillo.

The Medieval Old Town of Cáceres doesn’t look unlike Malta, Dubrovnik or Girona, all of which depicted the capital. In all likelihood Cáceres City is King’s Landing. The locations are the Plaza de las Veletas and the Plaza Mayor, including its towers.

Game of Thrones will be at Trujillo Castle from the 7th to the 17th, though cameras will only roll for three days, at least according to an earlier report. Plans might have changed and the scene extended. The cast will shoot with 100 extras on the castle’s courtyard:

Now, let’s finish off with Malpartida, the most intriguing location of them all. It’s not only the last to be invaded by the series but it will also undergo the longest shoot. A municipality in the province of Cáceres, Malpartida is best known for its natural monument, Los Barruecos. The dreamlike lake will be involved, but to a lesser extent than previously thought. Los Siete Reinos retracted their report that a main character would fall into the water. Apparently, that was about a different show altogether.

In fact, the large majority of the one-month filming at Malpartida will actually take place in the nearby, privately-owned, much less visually striking land of Las Breñas:

Game of Thrones will put 450 extras to work in Malpartida, after undergoing military training for a whole week by two British Army instructors. This is only rivaled by the award-winning Battle of the Bastards, which also underwent a month-long production. There is a reason for the Las Breñas shoot to be the longest, despite it being just an empty field. Remember Saintfield, where the Battle of the Bastards was filmed? Expect the sequence at Las Breñas to be the equivalent large battle in season seven.

Are you hyped yet? If not, there is plenty more to learn. The battle will be an ambush. The aggressors seem to be the Targaryens —In particular, this attack will be led by Daenerys and at least one of her dragons, followed by her Dothraki horde, judging by the casting call and the search for horses. Considering where we left off the story last season, the army under attack have to be the Lannisters, and indeed we know one of them will be present, probably Jaime. The Lannisters will be returning home with wagons full of goods that they grabbed from a castle, which of course will be inserted in the background via the usual VFX magic. As for what stronghold this will be, that has not been confirmed yet, but the look of the area points to somewhere in Dorne or the Reach. Yesterday, Los Siete Reinos gave us an exclusive look at the rickety wagons: 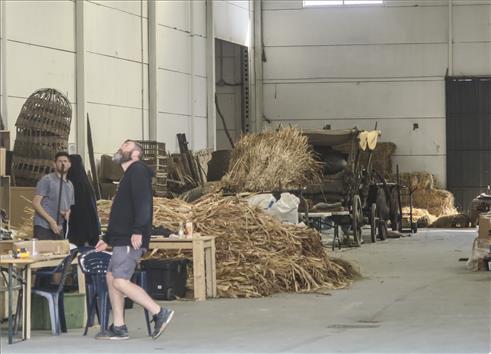 When will we get to watch this impressive-sounding battle? Thankfully, Mark Mylod was spotted scouting the area. As well as the second episode, he may also be involved in either episode three or four, neither of which we have been able to attach a director to yet. So, unconventionally, this southern battle will take place in the mid-season.

If you have somehow survived this roundup of conflicting dates and weird-sounding names, congratulations! Just in case, here is a recap on the production dates:

Now, I am aware this report will welcome speculation and comparisons to possible leaks, but please limit yourselves to healthy speculation based on the spoilers reported on Watchers on the Wall and move any leak-related discussion to the forums.