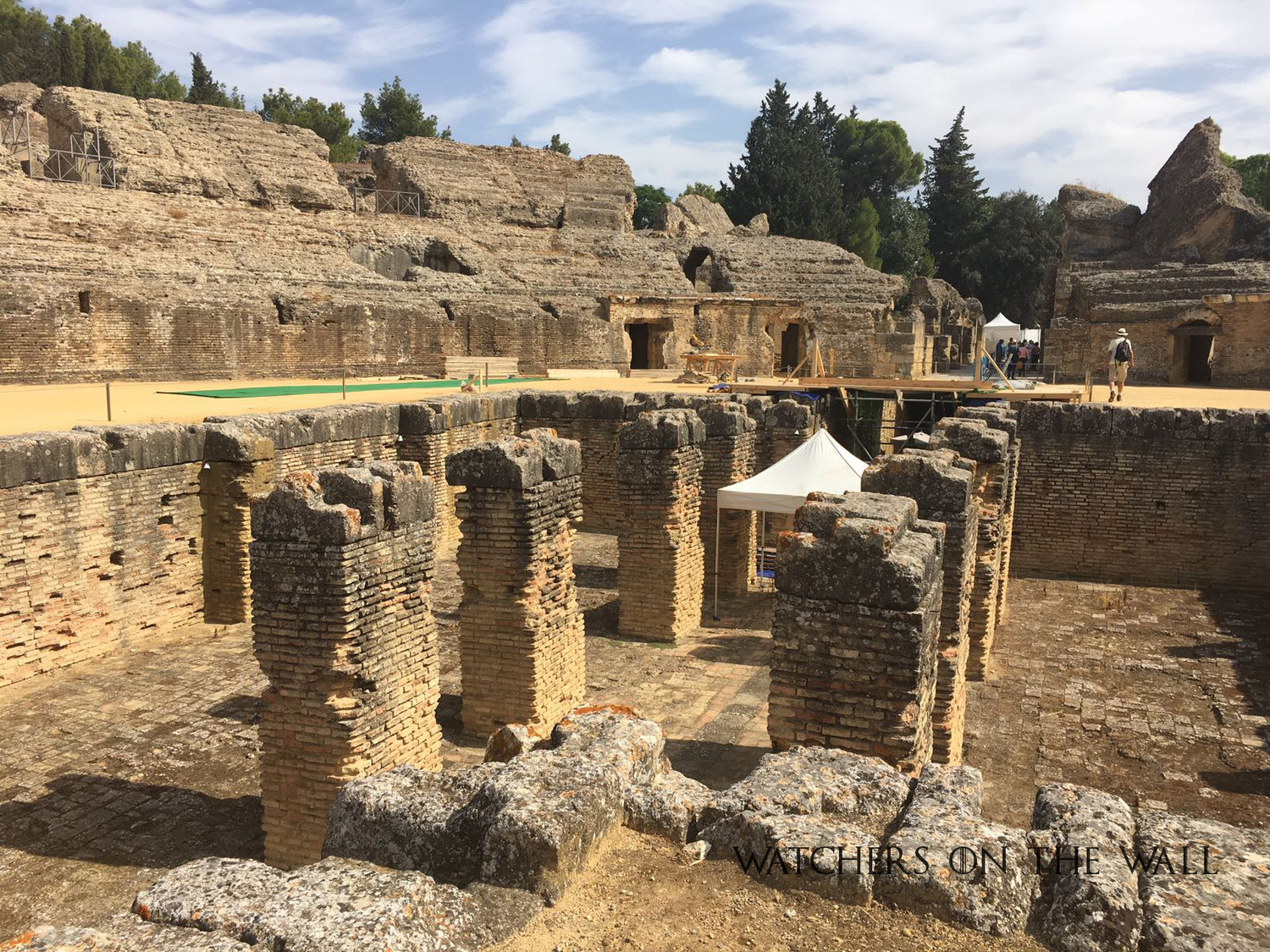 We have a great visual treat today, along with a report from a season 7 set, thanks to WotW reader Apollo. Apollo visited a few Game of Thrones locations in Spain this week and was able to take a fantastic amount of photographs to give us a look at where Game of Thrones will be filming for this season.

While visiting the ancient Roman ruins of Italica, found in Santiponce, Seville, Apollo found sets in progress. The construction is currently centered in Italica’s amphitheater space. The crew is building a staircase from the ground below up to the pit floor. It looks like they’re covering up part of the exposed area in the pit for filming- the narrow channel leading to the wider central area. Apollo reports there were a lot of heavy-duty metal frames in the storage area that could be for the supports underneath. There are also an assortment of fake rocks and shrubbery for dressing of the set.

As for the green screen fabric lying around, it appears to be covering the work rather than for any CGI purpose.

Views of the Italica season 7 set: 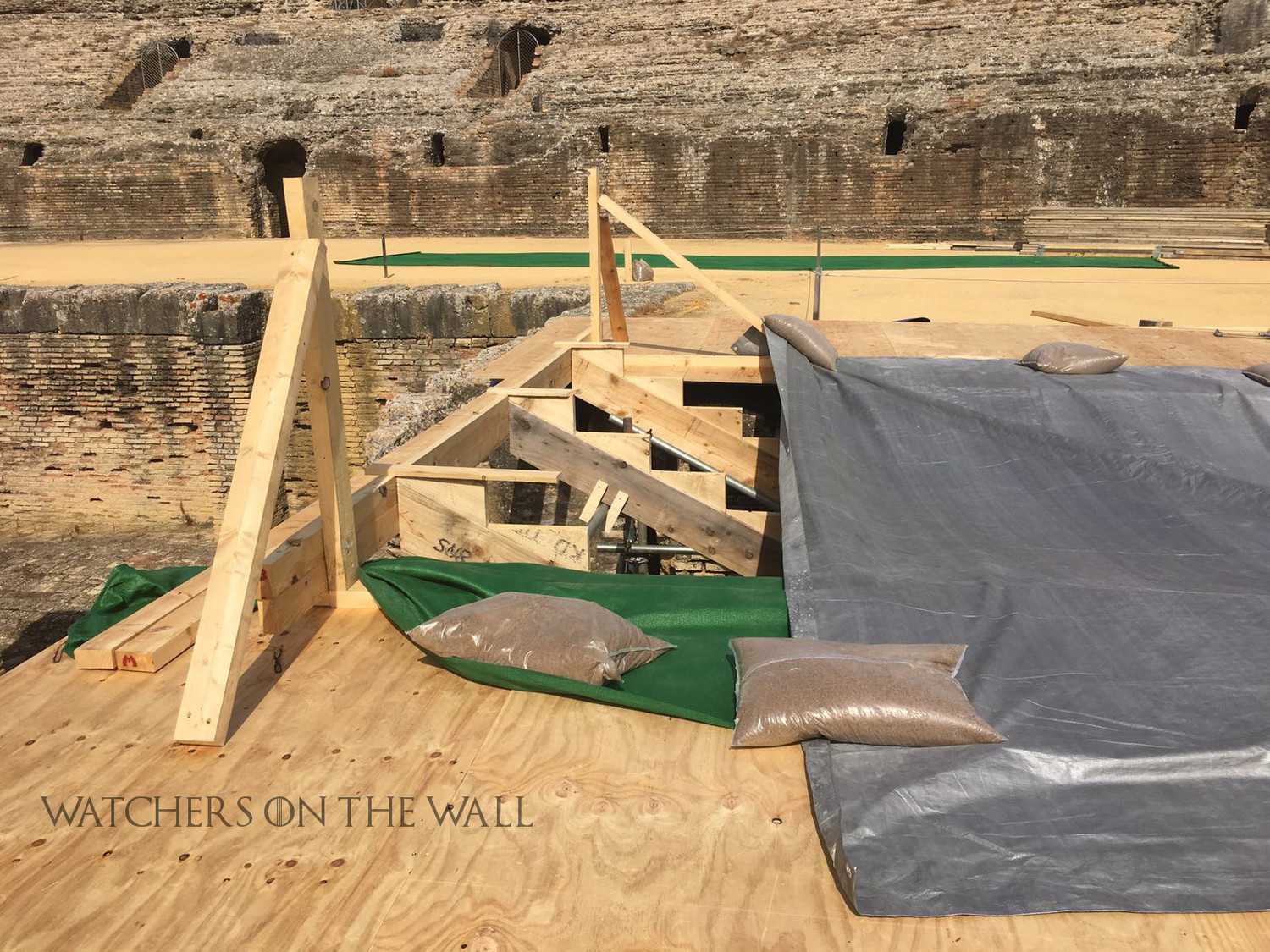 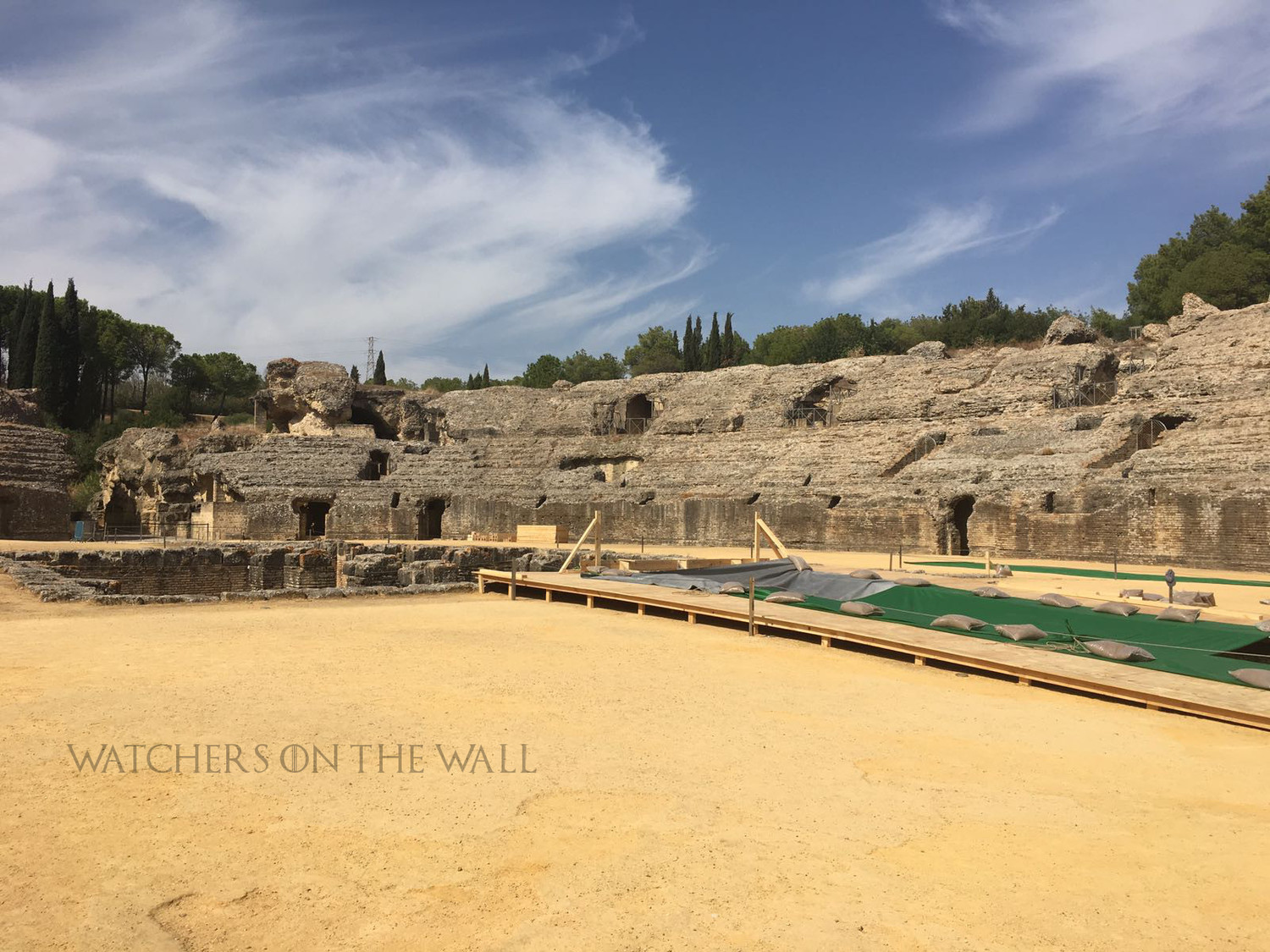 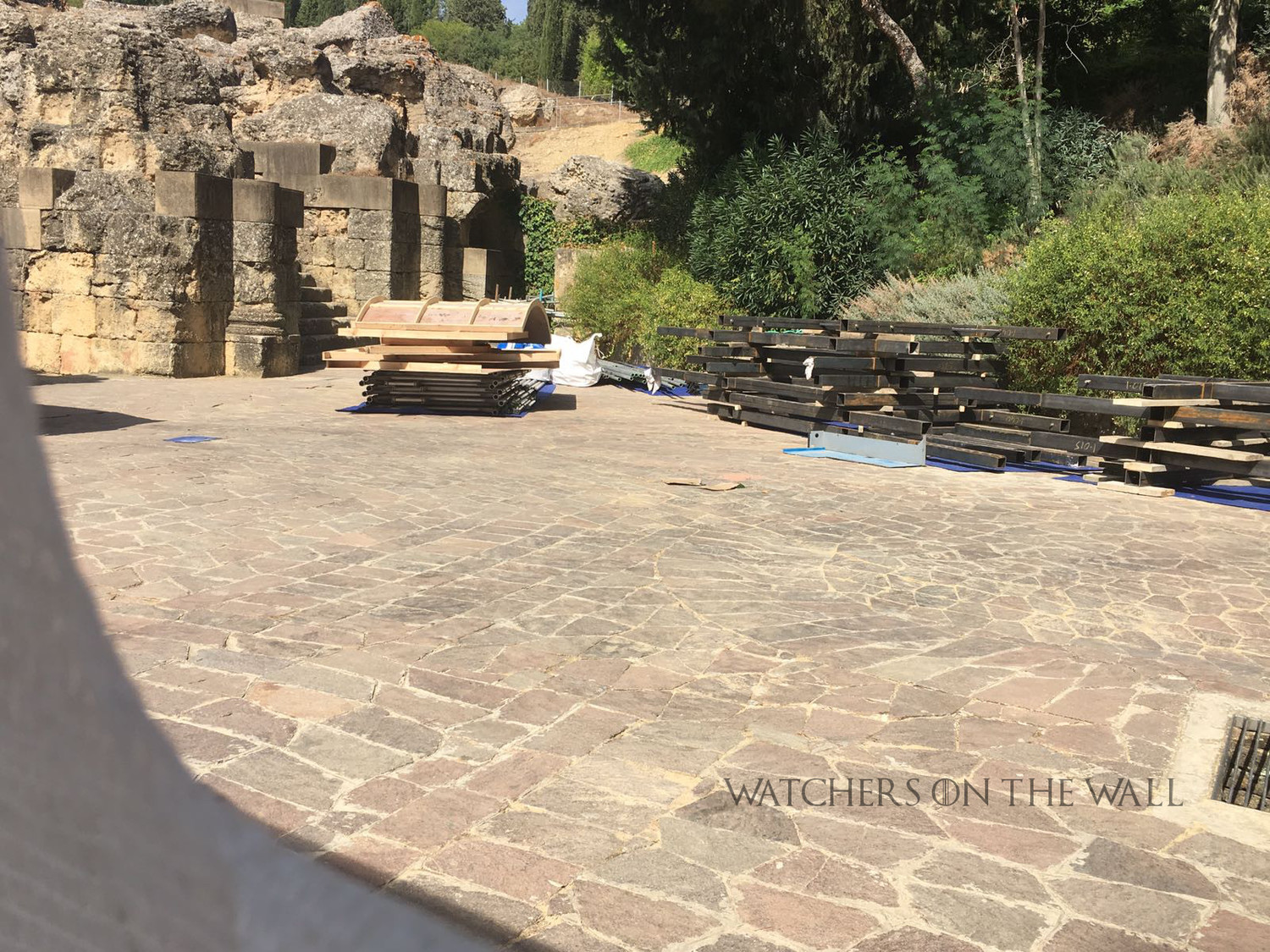 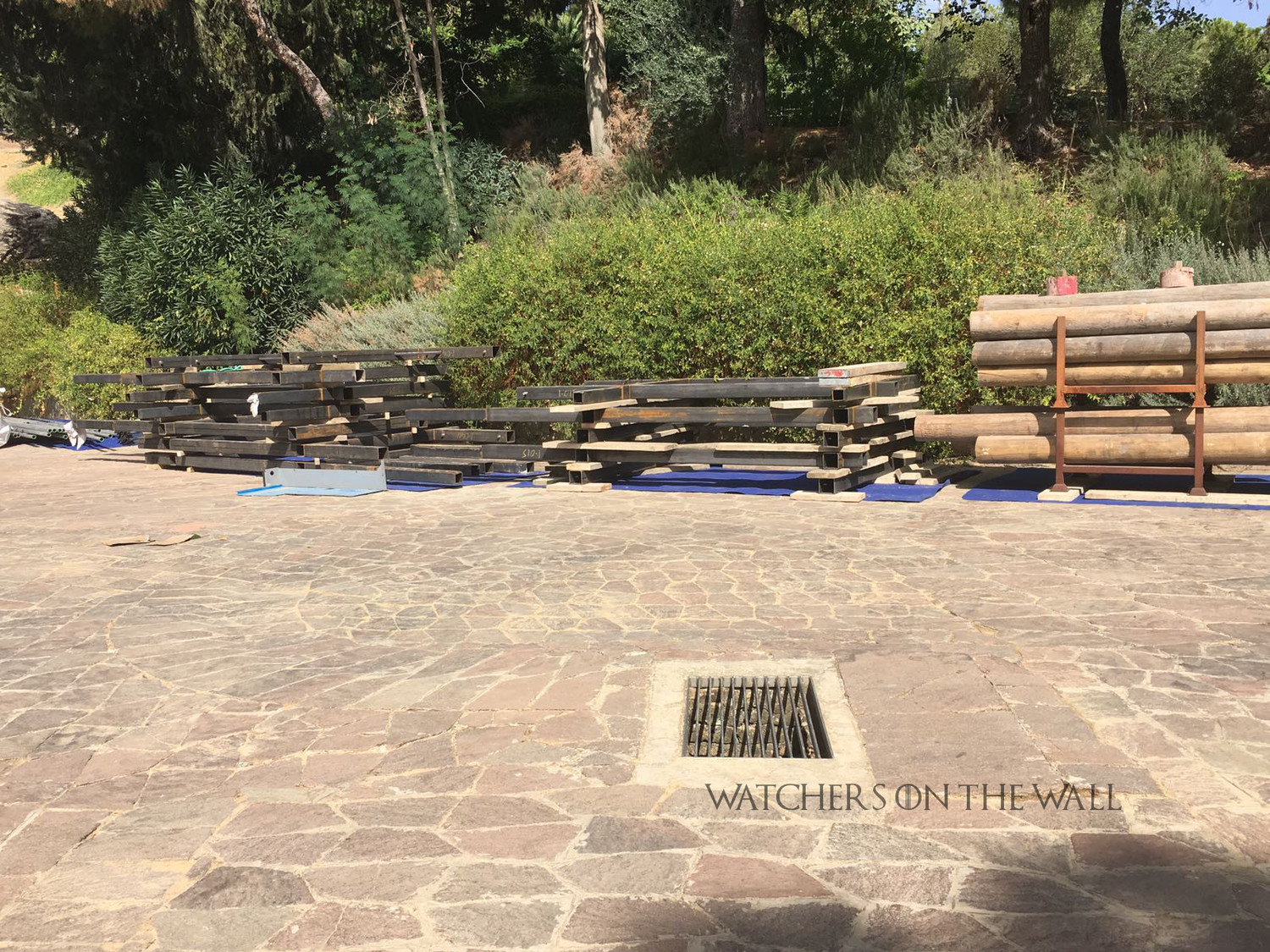 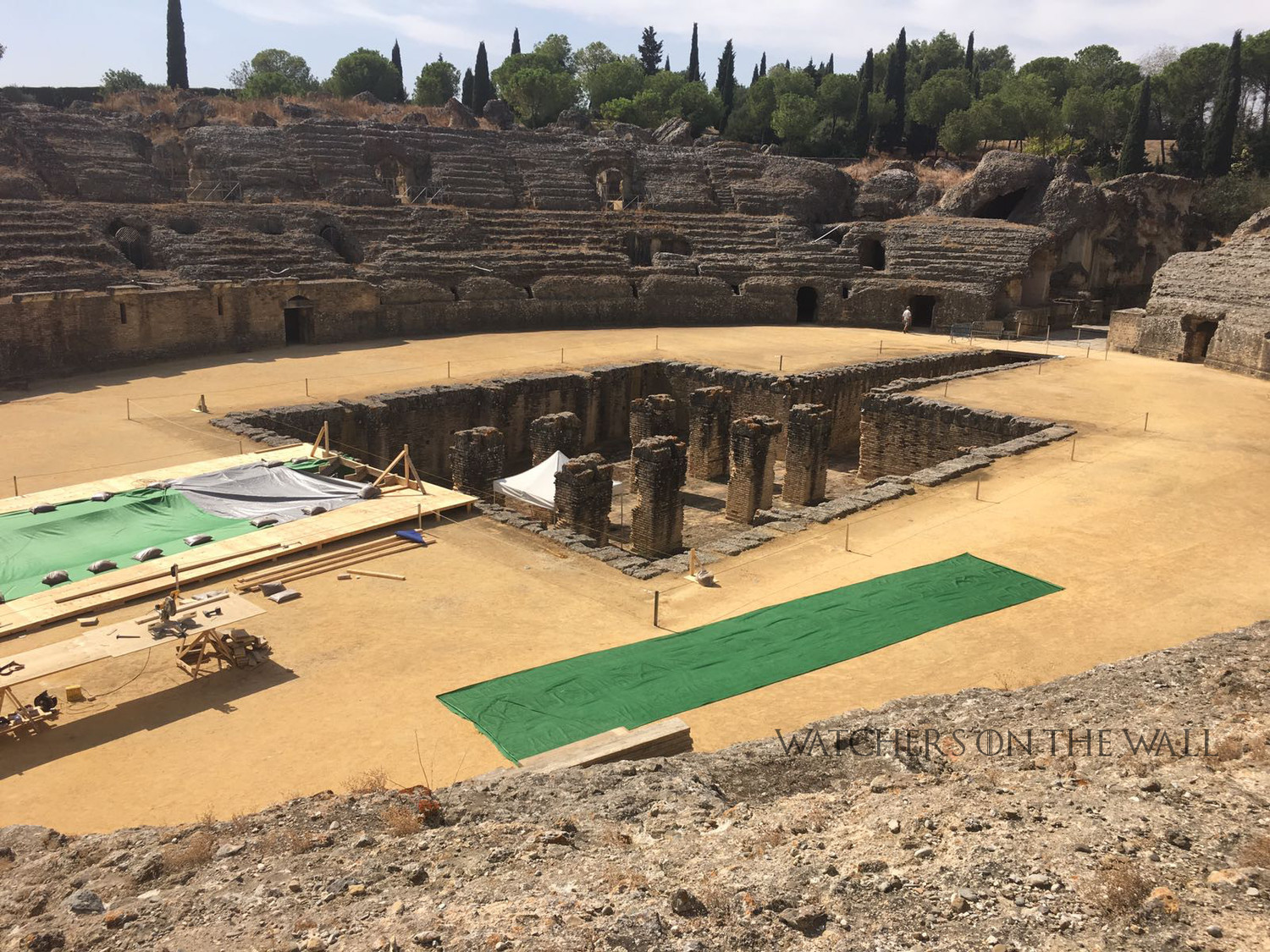 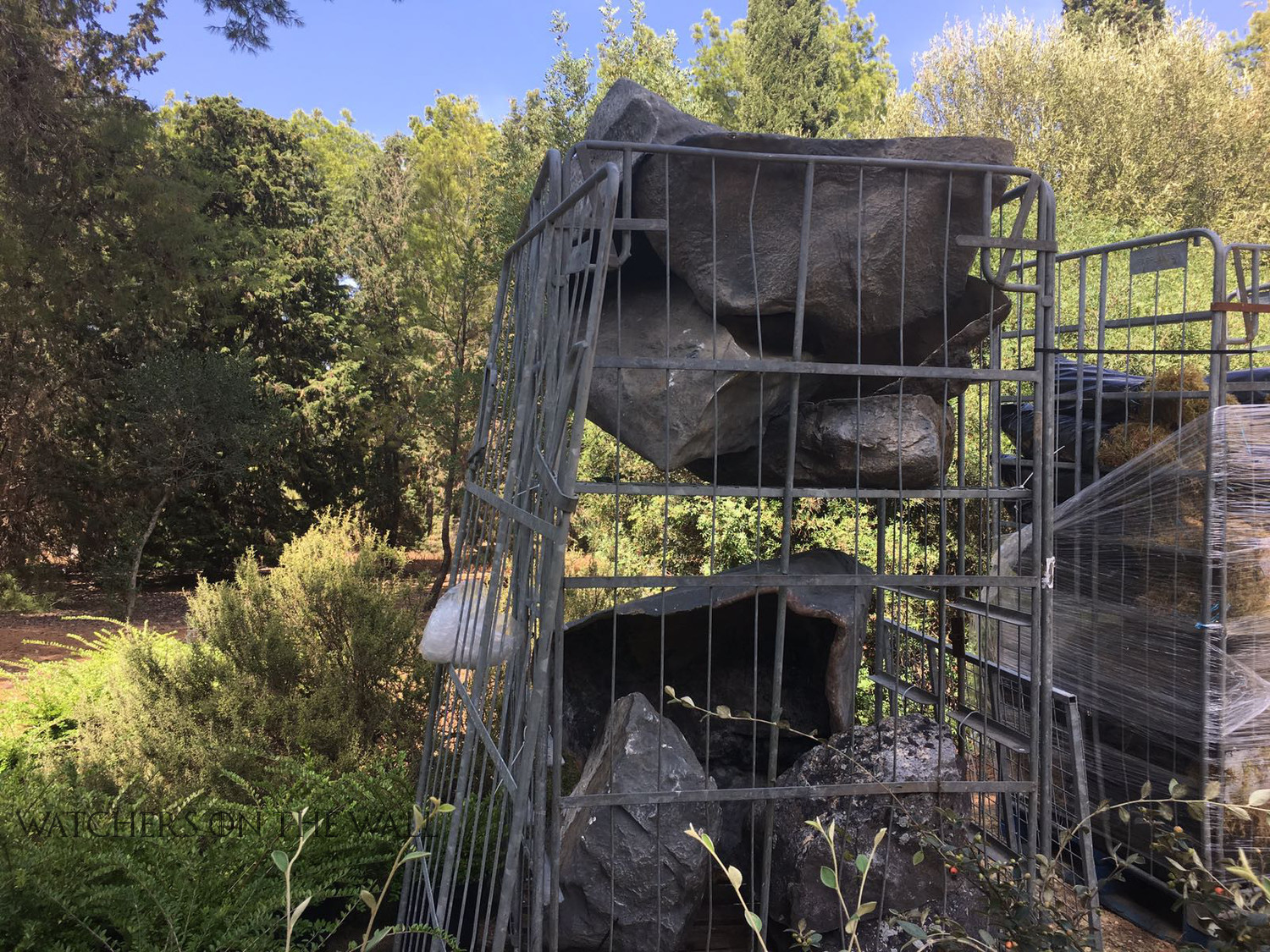 Apollo also took a short video of the location so you can get a feel for the space:

And what is this location for? After seeing so many images, and knowing what we do of season 7, I’m fairly positive that this site will be the Dragonpit.  The ruined look of the place is perfect for it, and I can easily envision Dany’s children making themselves at home there.

After his trip to Santiponce, Apollo visited another site: Castillo de Almodóvar del Río, found in the province of Córdoba.

The castle was unfortunately less busy than Italica is, at the moment. But an employee on site did confirm that shooting will take place inside the castle.

As far as filming options, Apollo reports that the interior of the castle grounds and rooms were “fairly cramped.” The battlements might be an option but it would be quite difficult to get crew and equipment up to that part of the site. The main castle square is a better option but Apollo observed that “It has a combination of architectural styles, some fairly modern- would need some serious work done to age the place.” There is a smaller, secondary square in the castle that has lots of trees and very little space for people, so it might be a poor choice for a scene as well.

Apollo did spy in one area a few men working on a large number of benches, which ordinarily would ping the production radar. Unfortunately, the benches do look as if they’re part of the castles’ property, and are unlikely to be part of Game of Thrones prep work. But there’s a photo, so you can decide for yourself! 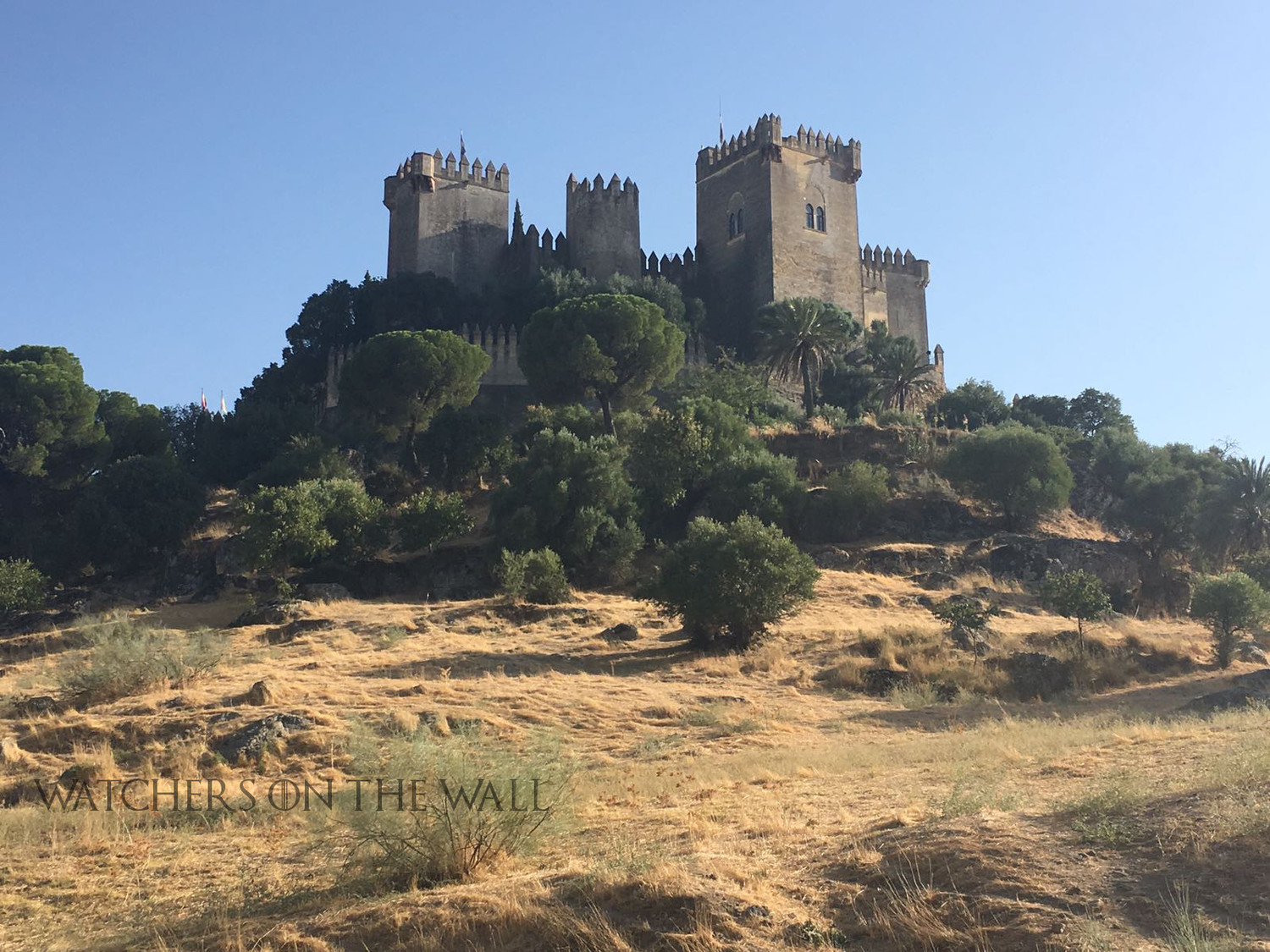 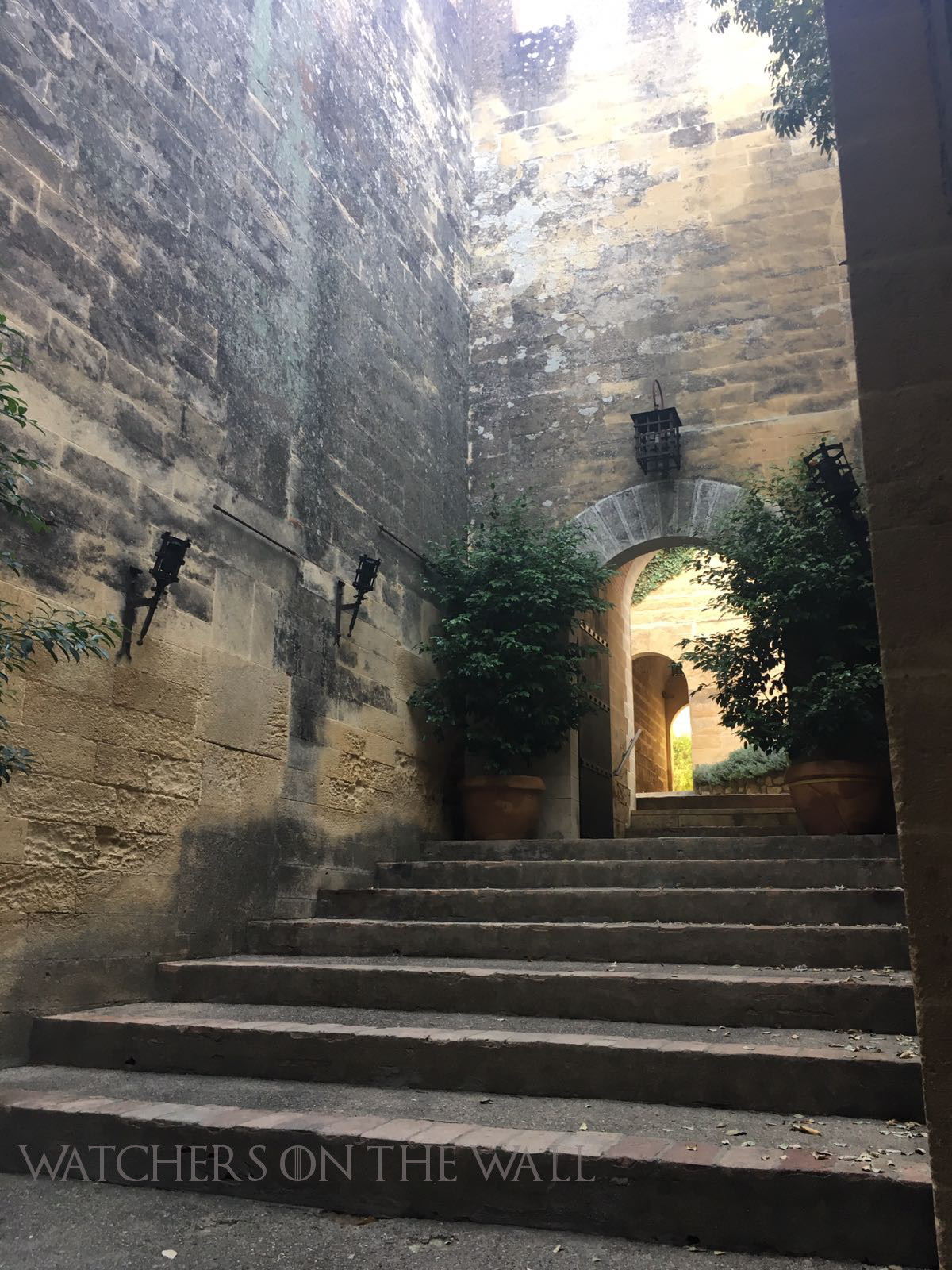 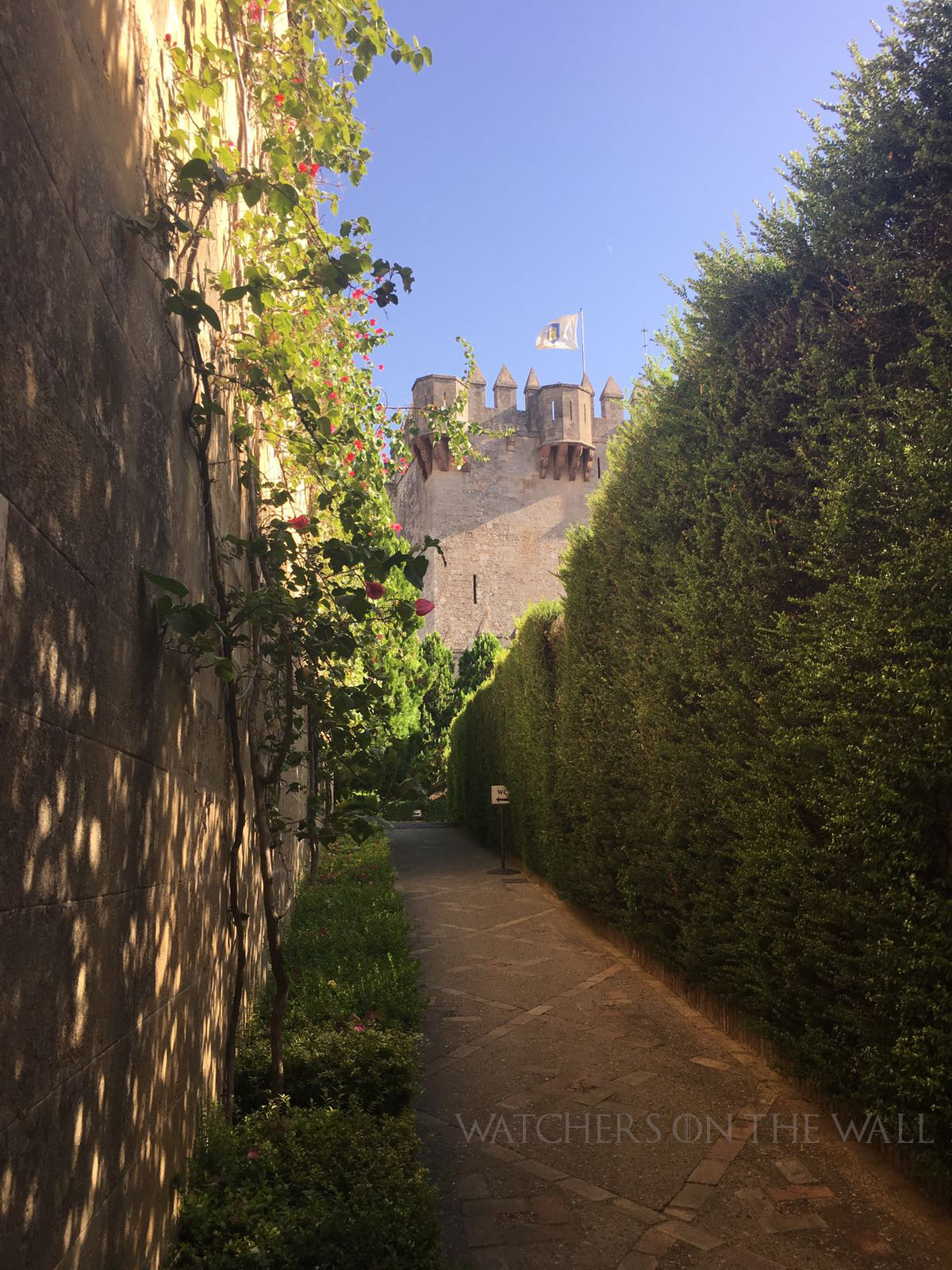 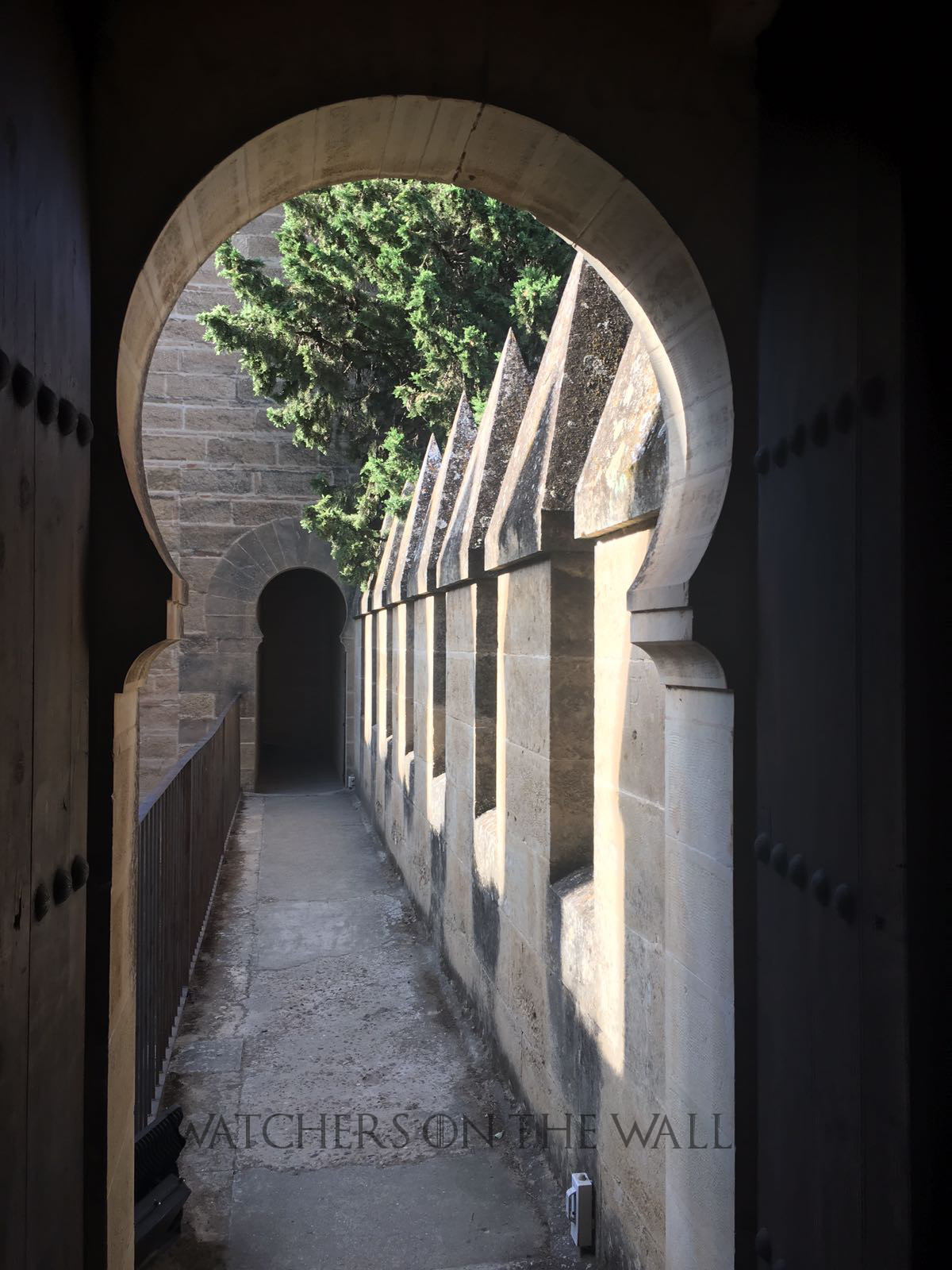 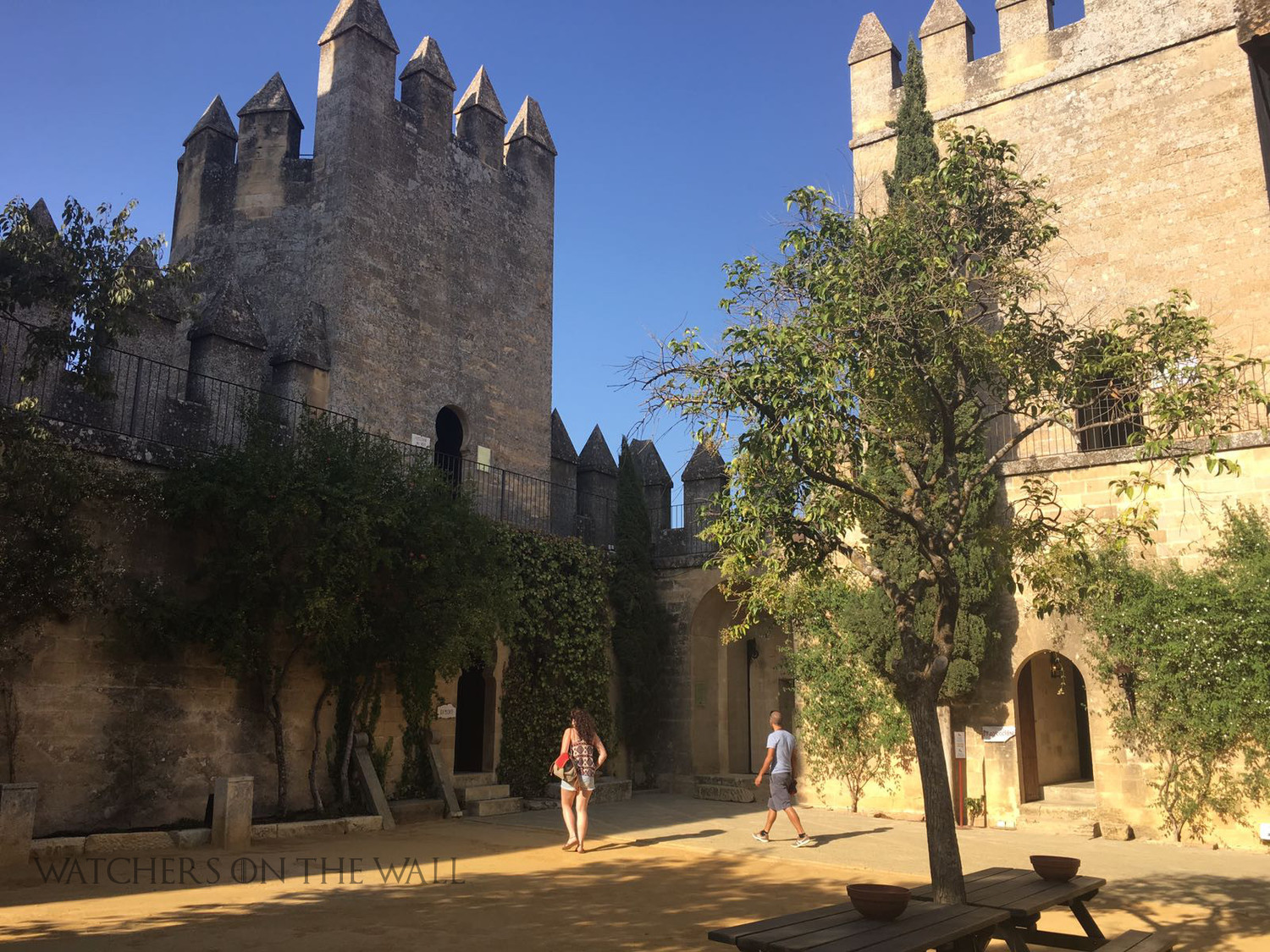 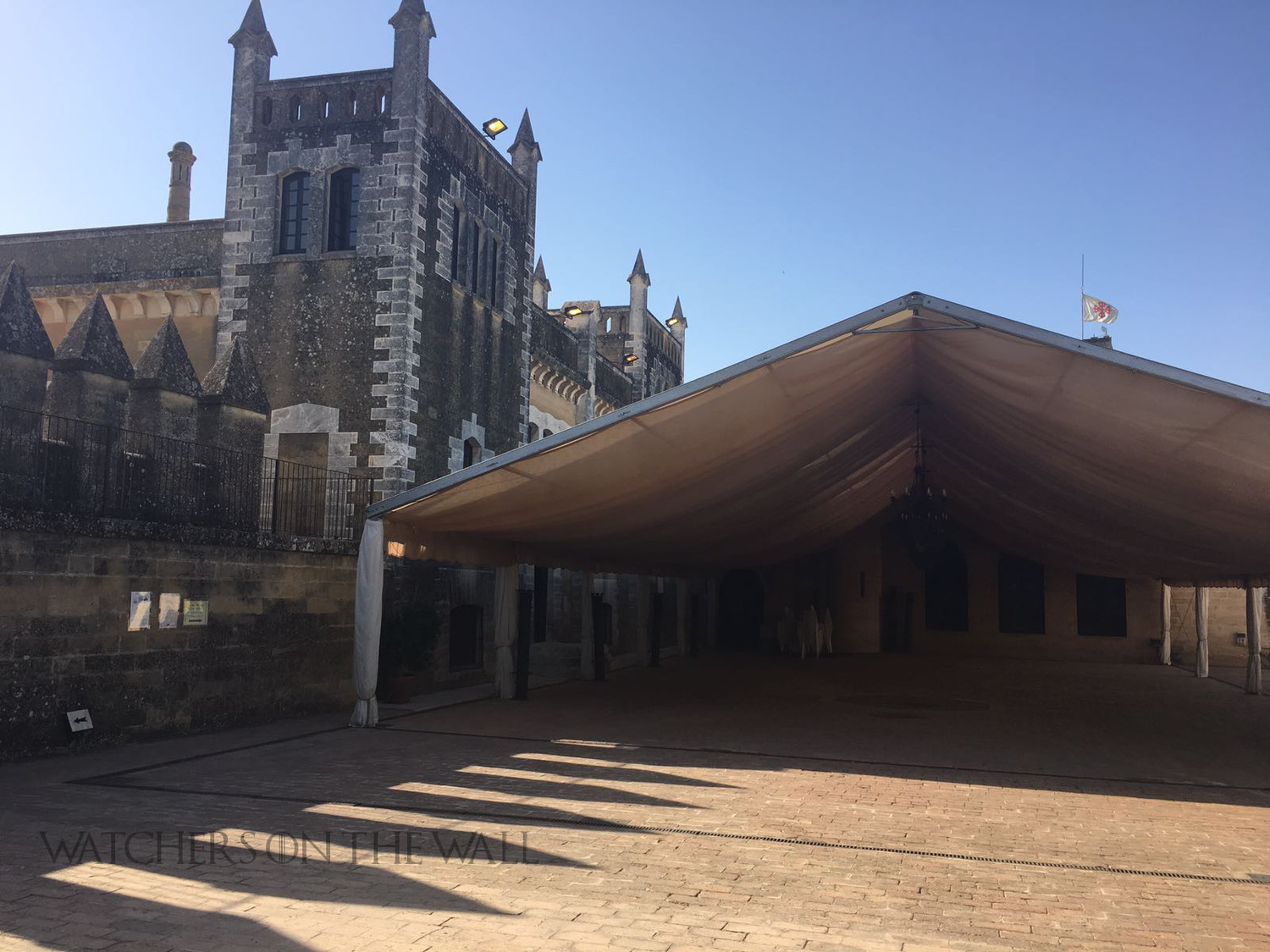 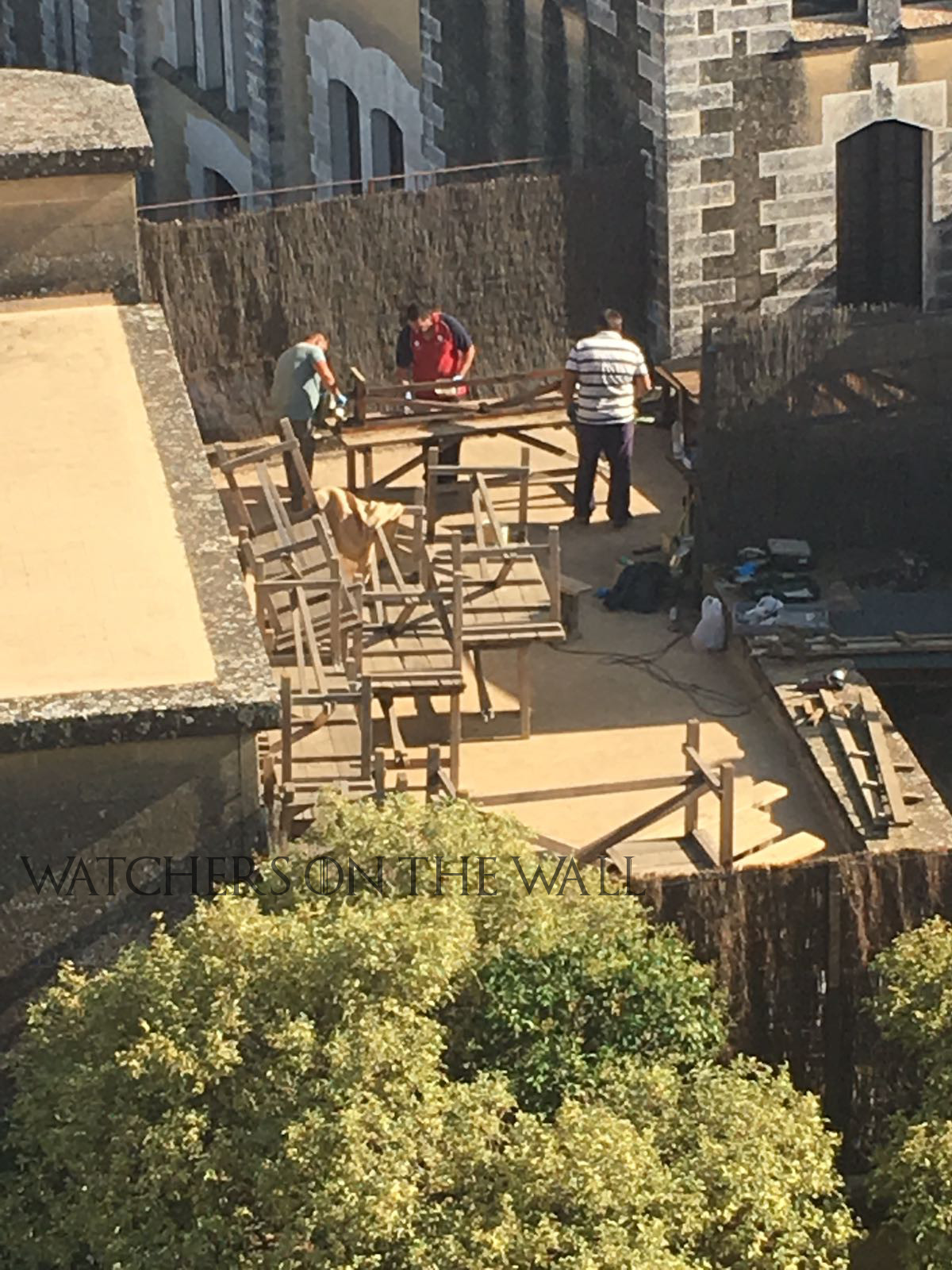 Cramped or not, it’s still a stunningly gorgeous location and I see possibilities in the courtyards.

Thank you so much to Apollo for providing his photos and video to Watchers on the Wall, and for bringing us these new details!