Next Basque locations ready for action, GoT invades Malpartida & a character returns | Watchers on the Wall | A Game of Thrones Community for Breaking News, Casting, and Commentary

While the Game of Thrones cast and crew keep on filming in Barrika, hidden from view by the stoney shore of Muriola Beach, the two remaining Basque locations receive their finishing touches, and part of the production team already moves south to prepare for the much anticipated filming at Malpartida, which promises to be a huge sequence. Not everything is happening in Spain, however: News coming from Northern Ireland suggest the return of a character whose fate was left uncertain at the end of last season.

The elaborate set dressing of Zumaia’s Itzurun beach has been going on for weeks now, while Gaztelugatxe in Bermeo has remained curiously untouched, even though they are set to film there first —Tomorrow, in fact. Yet, one only has to take a glance (or this beautiful drone flyby) to realize why that may be the case: The quaint islet, connected to the mainland by a sinuous bridge, already looks like it belongs on Game of Thrones, so why change anything? Well, it may have been late, but change something they did: 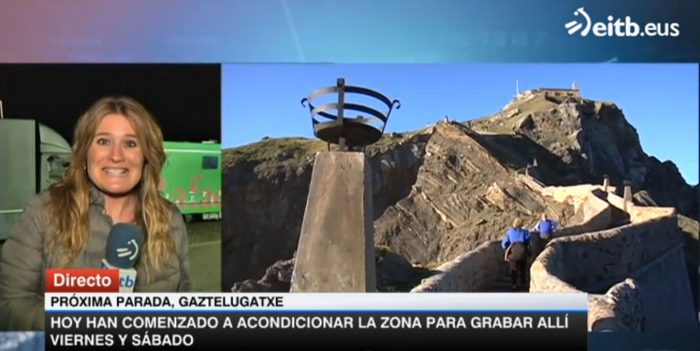 Thanks to Edd in the comments for the screen capture

Yesterday, ETB, the Basque Television Network, showed us the many white trucks that had invaded the area, as well as the discrete way in which the islet had been modified for filming: prop beacons have been implanted all along the path up the islet, which may point to some of the scenes filmed in this location being set at night. If you are picturing this path ending up in a CGI rendition of Dragonstone, you may just have the right idea. This is all the more exciting once you consider the persistent rumors that Emilia Clarke is already in Biscay, which —if true— would suggest she is set to film in Gaztelugatxe tomorrow. This may mean the Queen has returned to the place of her birth, which also happened to be the starting point of the Conquest for her ancestor Aegon.

Meanwhile, filming in Zumaia’s Itzurun beach commences on Monday, after the two other Basque locations are already done with. Its set dressing has now gone beyond replicating a fortified wall. As you can see, the production has expertly replicated the characteristic sedimentary rocks of Zumaia, the Flysch, for their props: 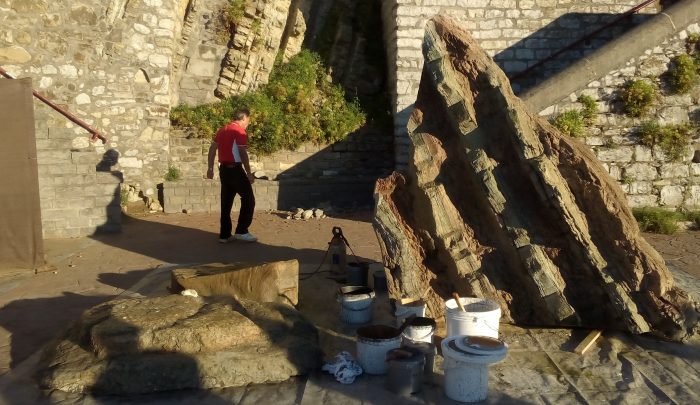 It has been previously rumored that Game of Thrones would take advantage of Itzurun’s caves for one of its scenes. As you can all see thanks to the ever-helpful Jon Urbieta, preparations are well underway to film inside these natural formations:

Now, let’s move south to Malpartida in Cáceres, specifically Las Breñas and Los Barruecos de Arriba. Last night, HOY reported on the initial preparations for the sequences to be filmed there, which promise to be much grander in scale to anything going on up north in the Basque Country. Fresco Films, the company that handles much of the production for HBO in Spain, rented six industrial depots in the area to house everything that such a production entails. This includes horses and 450 extras, who will be brought into the site a whole week before filming starts to be taught how to act like soldiers by two British Army instructors. These battle scenes will be accompanied by later filming in the nearby Cáceres City proper and Trujillo Castle.

Finally, let us return to the main hub of Game of Thrones: Northern Ireland, where everything is much more tightly controlled by the production. Thankfully, a few things always slip by, and this time it was that Tobias Menzies was returning to London from Belfast, which probably means he had new scenes to film for the show.

Last time we saw Lord Edmure Tully, he had just surrendered Riverrun, and then Walder Frey took him back to the Twins to rot in a jail cell… Yet, thanks to Arya, Walder Frey is no more, and his most prominent sons suffered an even worse (yet tastier) fate. Will Arya free her uncle, or will Edmure have to set himself free? What role will the Lord of Riverrun play in season seven? Let us know your theories in the comments!