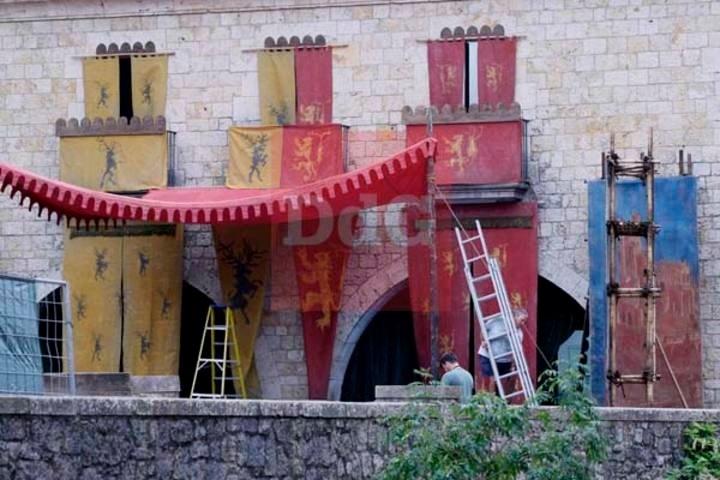 DiariDeGirona reports that more actors than Maisie Williams, Faye Marsay and Tom Wlaschiha have been in town.

The newspaper says that Lena Headey and Natalie Dormer, and possibly Finn Jones, have been in Girona but successfully dodged being seen. The newspaper speculates that Nikolaj Coster-Waldau and Sophie Turner may have been in Girona, but it sounds like there may be some confusion over their personal visits to the Costa Brava area of Spain earlier in the summer.

At this point, nothing can be considered confirmed in this arena until the actors are spotted. There are more scenes left to film this week, so there’s time.

There have been many actors spotted around the Game of Thrones Girona sets in the last couple days; we mean actors playing actors, as in the theatrical troupe members cast for scenes this week.

Ramon on Twitter shared these photos with us, and they should be considered a spoiler, along with our speculation based on casting breakdowns!

In the first photo, a dwarf is visible in the center middle of the photo, walking next to another performer. A show version of Bobono, perhaps? The second photo shows more troupe members trailing behind, and we understand that more were sighted in the area.

In the second photo, we see a young man wearing a cheap crown- the troupe’s version of Joffrey, their blond juvenile lead? He’s walking with the red-dressed woman that we saw the back of in a photo in another post. This is not Maisie Williams, we have been told.

UPDATE: Here are a couple more photos of the theatrical troupe members. Thanks to Narbo and Dark Sister for finding the photos/providing screencaps!

The longer-bearded man in the red coat is Ross Anderson, whose casting was announced here. The other red-coated man is Brendan O’Rourke, whose casting we just shared in this post!

The actors seem to be dressed as people from Westeros and are presenting the King’s Landing court story in their play. The man in the wig on the right appears to be their version of Ned Stark, and the brown-haired woman next to him, with flowers in her hair- is she a version of Margaery? The style of her dress is reminiscent of Margaery, but it’s hard to say with a cheaper theater-troupe copy of costumes.

I have to say, I can’t wait to see these scenes! 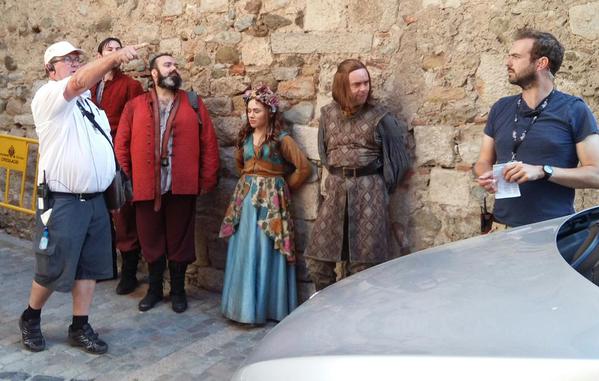 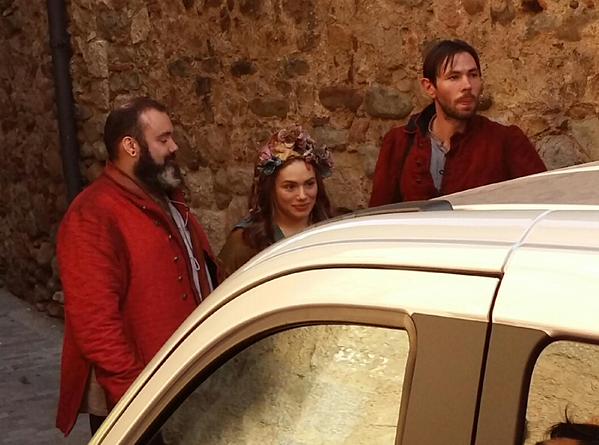 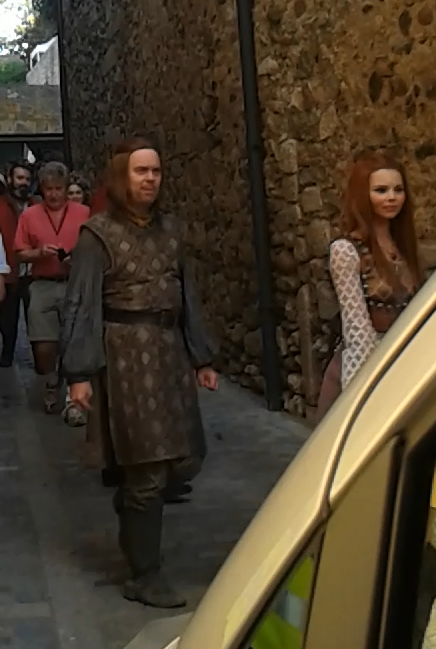 An announcement from Alex Cusack Management posted on August 29th states, “Eddie Jackson, Glen Barry & Brendan O’Rourke cast in Game of Thrones.” Jackson’s casting was announced previously, back in July, but the other two names are new to us.

Barry also tweeted about his casting this week:

Who knew Ryanair flies to Braavosi!?!?Delighted to be in one of my favourite shows. Game of Thrones. Bring it.

The announcement from Alex Cusack says that all three are “currently filming” but it was probably meant in a broad sense,  not all actually that week; in the posting from July, the management stated Jackson was filming in July and then again in Spain in October.

Barry mentions Braavos- perhaps he’s one of the theatrical performers on set currently?

We’ve received word that Game of Thrones is casting for another character that appears to be Dothraki. With several other parts indicated in past casting breakdowns, plus extras casting hinting at it, it seems like the Dothraki are making a real comeback with their presence this year.

The newest character is a Young Warrior. aged 20 – 35. They’re looking for someone non-white, physically fit and 6 feet tall and over. He’s a brash warrior with confidence and swagger who has been very successful in battle. He’ll be required to learn lines phonetically since they’re in a fictional language. He shoots on September 25th.

The write-up is virtually identical to the one for the obviously Dothraki characters listed in our second casting post back in June.