We’re in the thick of Game of Thrones filming season now, with activity hopping in Northern Ireland, and shooting in Spain due to begin soon. Like proper filming buffs, we’re in full #PinkSignWatch mode from now until February.

The 6th annual TitanCon gathering went down this weekend in Belfast. While out and about in Northern Ireland this morning, one of the guests spotted a sign. Looks like GoT is filming again (or still, we should say) in Banbridge, home of Linen Mill Studios.

Elsewhere in N. Ireland, signs are still being spotted near Ballycastle. We first heard of filming in that area a few days back, with one reader finding a sign there last Thursday and another snapping a photo of production at work. Today, a Redditor came across another sign in the area:

[NO SPOILERS] How the cast and production team get around Northern Ireland. Follow the GOT signs

We have yet to see evidence of actual shooting though- no photos of actors coming and going from set and the traffic in that area still seems light. At this point, they may still be in the preparations stage. 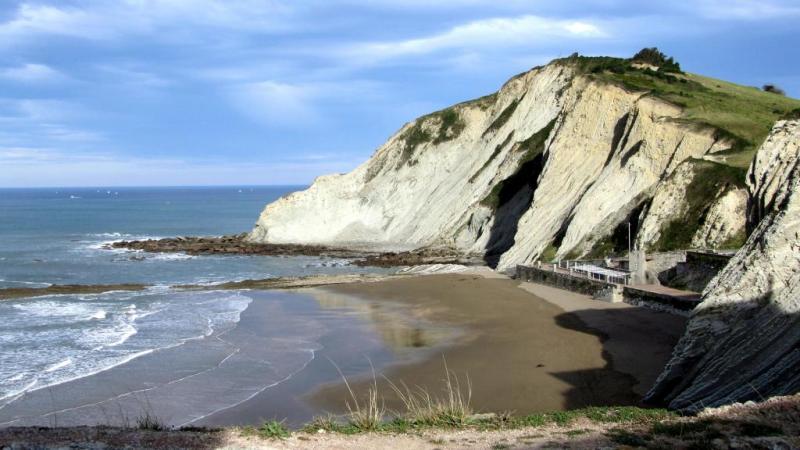 In Spain, it’s about to get a whole lot busier. Crews arrived today in the northern Basque Country town of Zumaia to begin preparations for season 7 filming. HBO’s production staff will spend the next three weeks putting together the equipment for recording in Zumaia, particularly what’s needed near Itzurun Beach and the “flysch,” the unusual rock formations that Zumaia is well known for. The beach will be closed for six days during filming time, which is expected to begin around October 26th.

As for what they’ll be filming in Zumaia, Los Siete Reinos has new spoilers and information for us today. That’s right, SPOILERS!

L7R has learned that for shooting in Zumaia, GoT is hiring rowers for a scene at sea. Shooting out on open waters is not very common for the show. They typically prefer to shoot with their usual ship on the studio lot with the watery environment added in post, or in some situations, they remain on location close to the shore. But in Zumaia, apparently this boating scene will be genuinely on the water.

L7R is also sharing a rumor that HBO is revisiting the monastery of San Isidoro del Campo, in Santiponce, Seville. HBO had reportedly decided not to film there a while back, during scouting, because it was too modern-looking, but with the delay in filming, there is time to consider more locations. This is however unconfirmed, and the location may stay off the table.

Sources have also informed them the “action scene” being shot in the Roman ruins Italica won’t be a battle. There will be some sort of conflict, but not a full-scale battle. Italica is likely the Dragonpit, as many have suspected, and which sources have told us we can expect to see in season 7.

One last tidbit from L7R’s report: the only place in the city of Seville where GoT will be filming this season is the Royal Shipyards, with GoT passing over the Real Alcazar this season. Will that mean a decreased Dornish presence? Can we get any more decreased than we did in season 6? We just might find out.