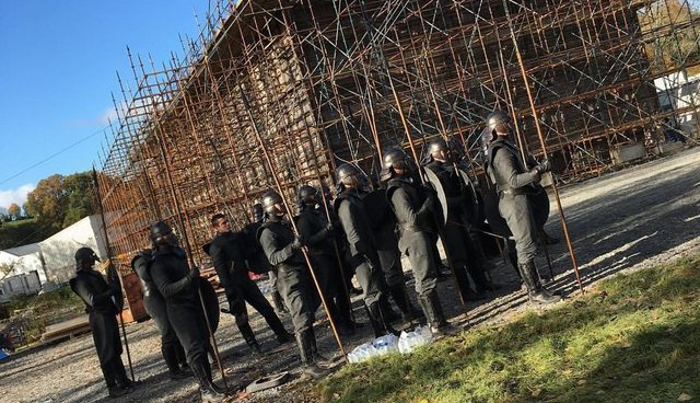 Filming for the seventh season of Game of Thrones may have wrapped up by now, but that doesn’t mean news have stopped coming our way: New photographs have surfaced from the sets at Corbet-Banbridge, Wolf Hill Quarry and perhaps Moneyglass as well.

If you are completely unaware of any narrative developments in season seven, much of what follows will constitute a spoiler. If you are up to date, however, this will only give you a proper look at certain locations and events we have only read about up to now.

A faithful Watchers on the Wall reader going by “Davos’ Luck” tipped us about a recent thread in the Free Folk subreddit, in which user KaySen762 shared the following pictures:

What we see first is a stark bedroom, probably from their Winterfell set at Moneyglass. Then there is an atrium that almost looks like Riverrun, but not quite — Notice the lions! As the room is Lannister-themed, it will probably be part of the Casterly Rock set piece. If this is indeed a redressed version of the Riverrun set from season six (which would be a conventional time, space and money saving measure in any set designer’s department), that could explain why the castle at Corbet’s Linen Mill still stood tall during filming, despite the apparent lack of a plotline set in the Tully stronghold. In the same location, we can also see Unsullied and Lannister soldiers next to Euron’s ship, The Silence. Finally, the last two photos show wights and wildlings at Wolf Hill Quarry.