Game of Thrones Season 8 premiere cast possibly revealed, with surprising returns! | Watchers on the Wall | A Game of Thrones Community for Breaking News, Casting, and Commentary 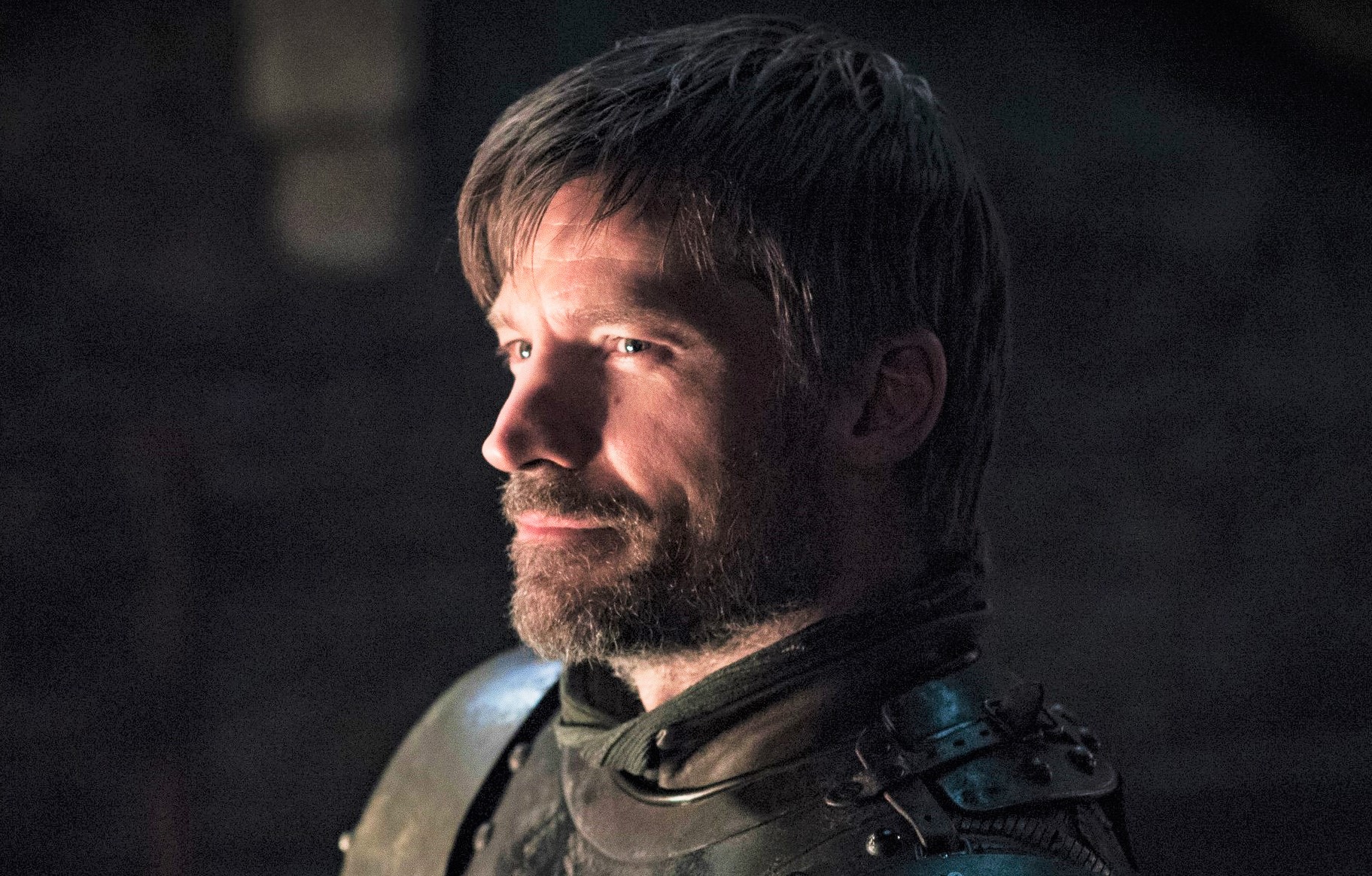 Though Game of Thrones spoiler-hounds such as ourselves would like to believe we know a lot about the upcoming final season, the truth is that, for the first time, we’re going into a new season with no source material or plot leaks. If you’re happy with that, this may be the time to peace out, as a full cast list for season eight’s premiere may have been released… semi-officially. Normally, that wouldn’t mean much, but there are a few surprises—if you want to go in completely blind, this is your spoiler warning!

People all over (thank you, D and Raven!) have been sending us the program details for the season premiere, though it’s not yet in the HBO schedule, by using the same method with which we once figured out the season seven running times—by looking for the already existing URL for a new episode, even before the schedule goes that far ahead.

Aside from providing us with a cast list, the program details claim the first episode is exactly one hour long, which fits the ballpark figures we got before, but is probably just as much of a generalization, or even a placeholder. Unless the season premiere is exactly 60 minutes long, I imagine we’ll get a more exact number in the coming weeks. 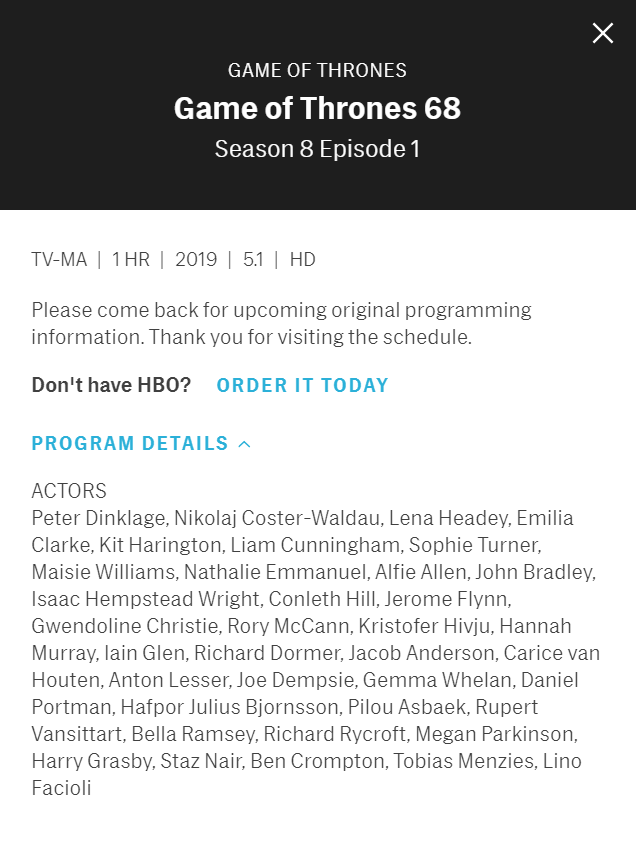 The cast list includes all the main stars everyone expected for the premiere, as well as a few others who we may have believed would skip the first episode, such as Jerome Flynn (Bronn); Kristofer Hivju and Richard Dormer (Tormund and Beric Dondarrion, last seen running away from the falling Wall), Carice van Houten (Melisandre, last seen heading to Volantis), and Gemma Whelan (Yara Greyjoy, last seen being imprisoned by Euron).

As for supporting and secondary characters, we have Anton Lesser and Hafþór Björnsson as Qyburn and the Mountain, the last remaining allies of Cersei; Pilou Asbæk as Euron Greyjoy; Rupert Vansittart, Bella Ramsey and Richard Rycroft filling in the northern court as Yohn Royce, Lyanna Mormont, and Maester Wolkan; Megan Parkinson and Harry Grasby as the totally doomed Alys Karstark and Ned Umber, the new rulers of Karhold and Last Hearth, the first lines of defense once the Wall falls; Staz Nair as Qhono, Dany’s main Dothraki bloodrider; and Ben Crompton back as Edd Tollett, who is, against all odds, the acting Lord Commander of the Night’s Watch.

So far, nothing shocking. However, the list ends with two pretty unexpected returns: Lino Facioli, who plays Robin Arryn, last seen in season six being manipulated by Littlefinger to march the Knights of the Vale north; and Tobias Menzies as Edmure Tully, who I believe we all gave up for dead (or forgotten) when Arya didn’t free him from the Twins in the season seven premiere, if he was indeed still there. I guess we’ll see! 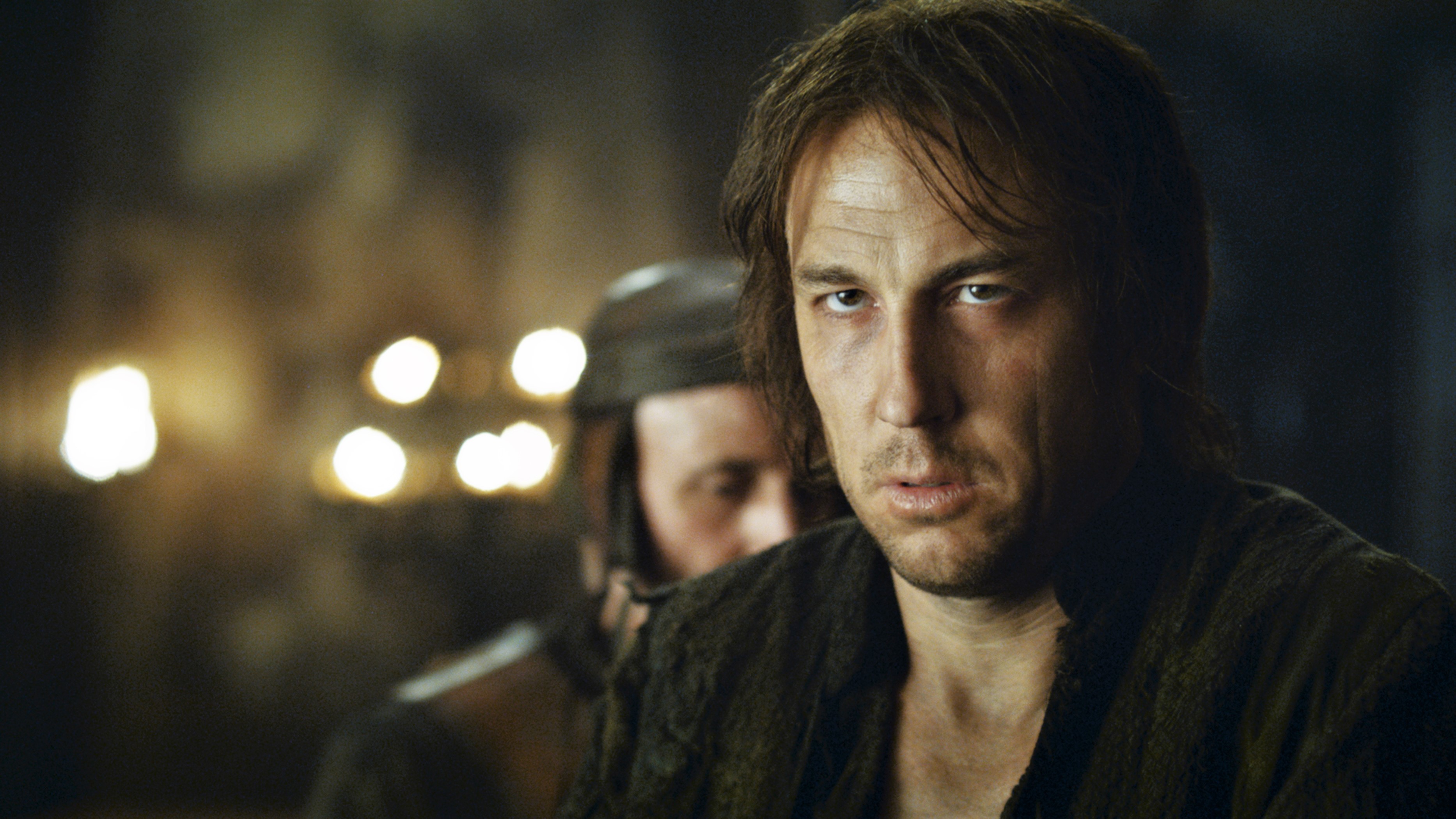 We should say these cast lists have been known to be mixed up between episodes, but never between seasons. So, though it’s possible for some of these cast members to only appear later in the season and not in the premiere, the characters who have been absent for years in particular are unlikely to be accidental leftovers from way back in season six. Whether they appear in the first episode or not, to the best our knowledge this is as close to a confirmation as we can hope for that they will appear in season eight.

Notably, if this was supposed to be an overall cast list for the season, there are notable absences (such as Vladimir Furdik as the Night King and newcomer Marc Rissmann as Harry Strickland, Commander of the Golden Company), which may point to the list being what it purports to be: the full cast for the first episode of season eight.