Valentine's Day in Westeros | Watchers on the Wall | A Game of Thrones Community for Breaking News, Casting, and Commentary 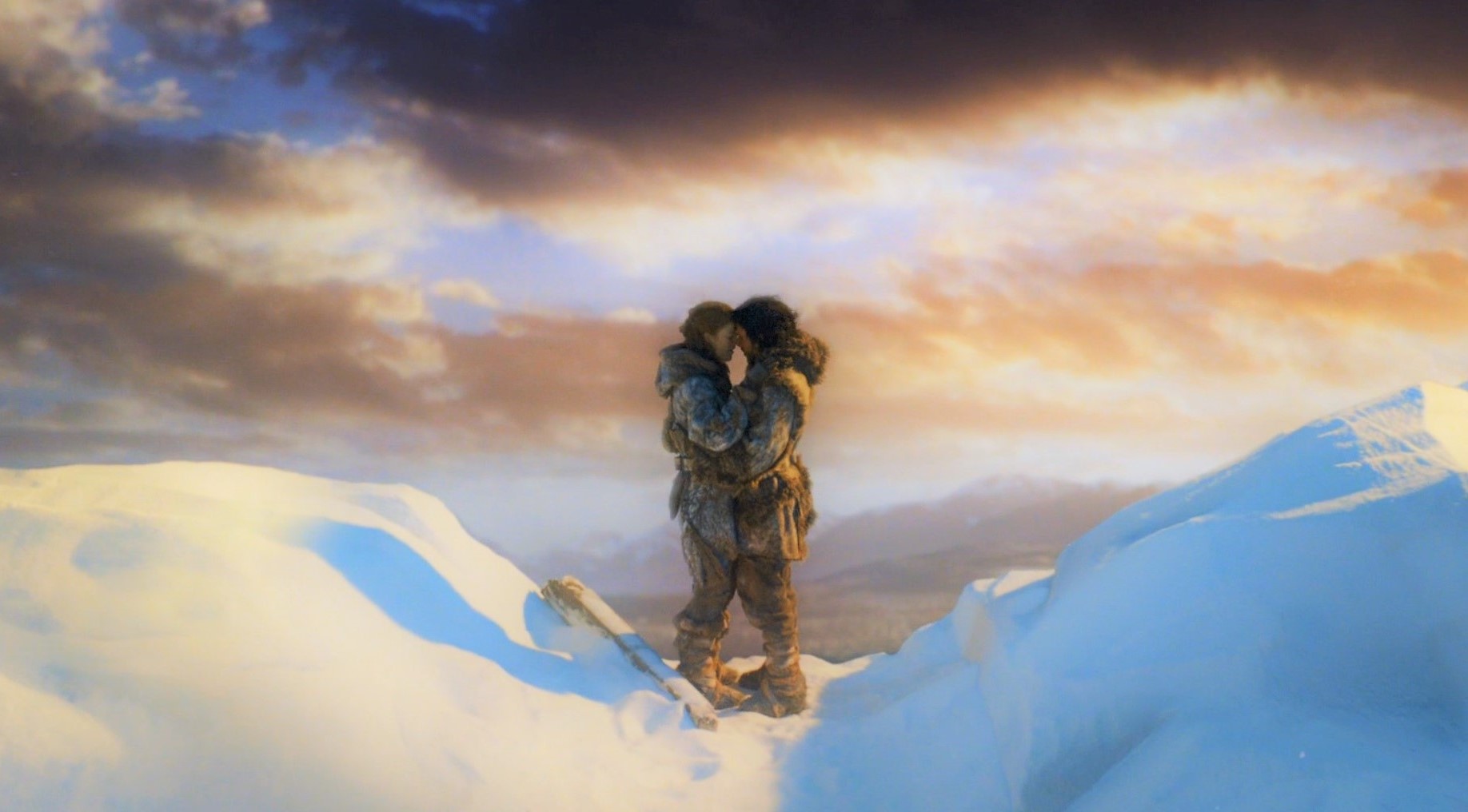 Ah, Valentine’s Day, a day celebrating love new and old. Flowers, candies, special dinners, declarations and tokens of love the world over. But a tradition steeped in the shadows of the past, no one quite sure what it actually is or what it used to mean. Only reacting to vague cultural recollections passed down from generation to generation until the true story is lost to an endless game of telephone errrr…. .raven? I challenge you dear reader, could anything be more Game of Thrones? The basic, simple truth at the core of the show we watch: love.

As for anything like Valentine’s Day in Westeros, it is hard to say. Many of the holidays from the Faith of the Seven revolve around their seven faced deity and there’s not an exact paragon of love and romance. The closest may be the feast of the Maiden’s Day, although it’s a rather gloomy affair when maiden’s gather in septs, light candles, and sign hymns while placing parchment garlands around the neck of statues of the Maiden.

Valentine’s Day itself is not a holiday whose origins are easy to trace. Depending on the source it goes back to any number of martyred Valetine’s and their feasts. Like the Starks and their problem of too many Brandons getting confused for each other. Some say it has connections with an ancient Roman holiday called Lupercalia, which functioned as a multi-day party around February 14th celebrating “fertility” if you catch my drift. Other stories link the holiday of love and romance to games of picking girl’s names out of hats. Whatever the true origin actually is, it has been lost to time but still it persists as a kernel of truth of being somehow a celebration of love.

In that vein, I’m going to tell you a story of romance, passion, and tragedy. Stop me if you’ve heard this one before. Two star-crossed lovers, each from a totally different world but intrigued by each other. Their culture, obligations, families, their identities make it impossible that they can be together. And yet they do, and in the rush of passion they fall in love and commit to each other. Reality though cannot be stopped forever, and the consequences of their actions ripple across their very world and what they had eventually falls. If that sounds familiar, it should.

Who did you think I was describing? Rhaegar and Lyanna? Jon Snow and Ygritte? Romeo and Juliet? Martin often loves uses allusions to other works, and the star-crossed lovers of Romeo and Juliet is one of his favorites. You could see the Starks and Targaryens or the Northerners and Wildlings as re-interpreted versions of the Montagues and Capulets taken far from Verona.

But no, I was talking of an ancient myth in the world of Westeros, one remembered as a warning and tragedy for every young boy and girl in the North. The Night’s King and his corpse bride, sometimes known as the Night’s Queen.

As remembered by Bran in the maw of history and horror known as the Nightfort in ASOS Bran IV, 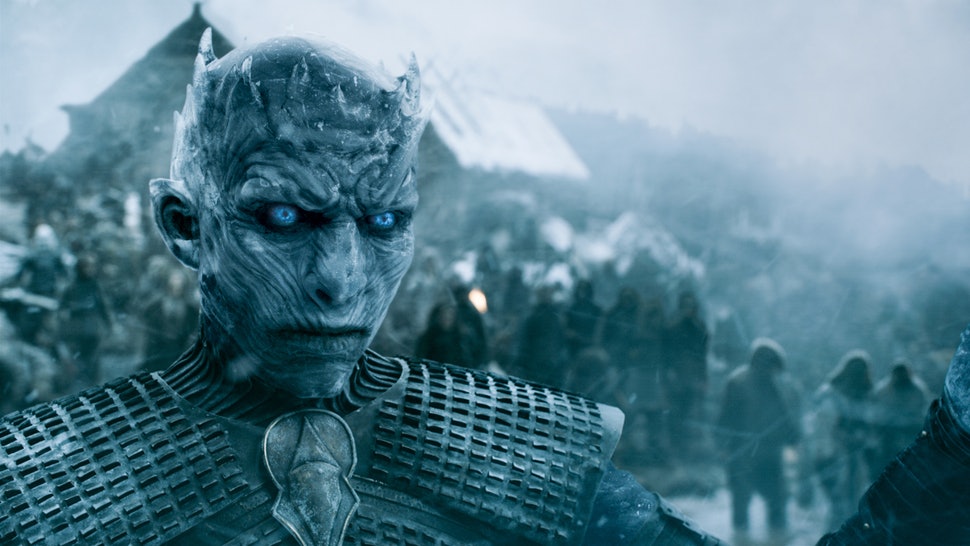 The gathering gloom put Bran in mind of another of Old Nan’s stories, the tale of Night’s King. He had been the thirteenth man to lead the Night’s Watch, she said; a warrior who knew no fear. “And that was the fault in him,” she would add, “for all men must know fear.” A woman was his downfall; a woman glimpsed from atop the Wall, with skin as white as the moon and eyes like blue stars. Fearing nothing, he chased her and caught her and loved her, though her skin was cold as ice, and when he gave his seed to her he gave his soul as well.

He brought her back to the Nightfort and proclaimed her a queen and himself her king, and with strange sorceries he bound his Sworn Brothers to his will. For thirteen years they had ruled, the Night’s King and his corpse queen, till finally the Stark of Winterfell and Joramun of the wildlings had joined to free the Watch from bondage. After his fall, when it was found he had been sacrificing to the Others, all records of Night’s King had been destroyed, his very name forbidden.

This is intended as a scary story for the children of the North to show them what happens when they forget their duty and turn towards the wickedness of lust and desire. However, strip away Old Nan’s warnings and moral lessons, and you have a story very much like Romeo and Juliet or Rhaegar and Lyanna or Jon and Ygritte. A man of the Night’s Watch looking over the Wall and seeing his enemy, someone he should cut down, and instead they fall in love instead. Almost a direct parallel to Jon and Ygritte in the mountains. 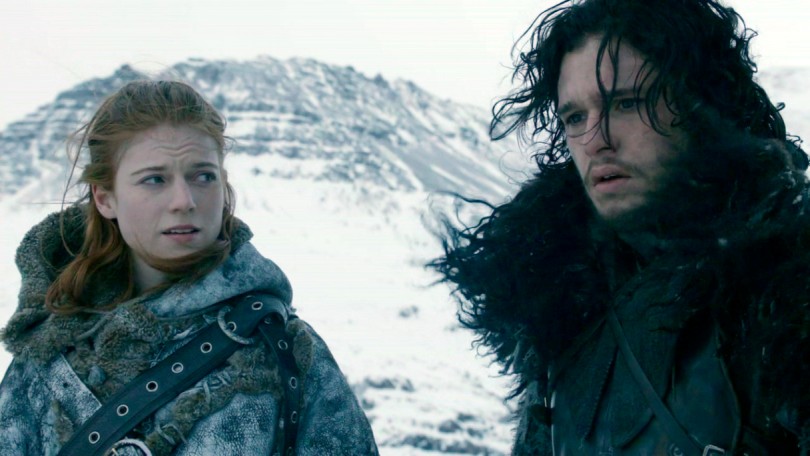 He raised Longclaw over his head, both hands tight around the grip. One cut, with all my weight behind it. He could give her a quick clean death, at least. He was his father’s son. Wasn’t he? Wasn’t he?

“Do it,” she urged him after a moment. “Bastard. Do it. I can’t stay brave forever.” When the blow did not fall she turned her head to look at him.

Their romance started after that, and eventually turned bitter and violent with Ygritte dying in Jon’s arms. It wasn’t just her that died though, it was the child inside Jon too. As Maester Aemon told him, Kill the boy. Lord Snow was born out of death that day and his heart hardened. 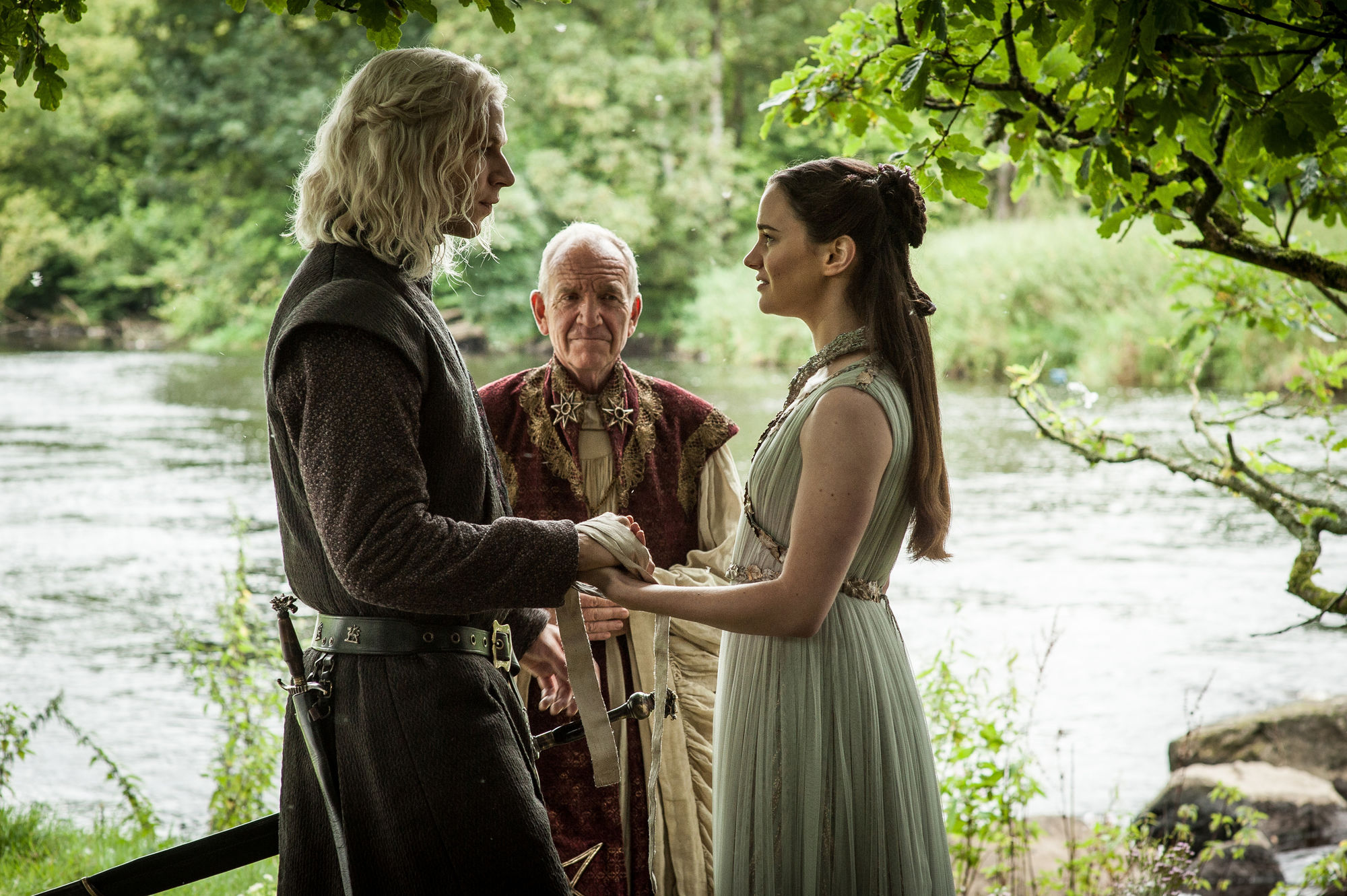 Rhaegar and Lyanna fit the pattern as well. Although not bound by Night’s Watch vows, they were bound all the same. Rhaegar already had a wife in Elia Martel and children. Although the Targaryens practiced polygamy in the past, it had long been abandoned as a conciliation towards the local religion of the Faith of the Seven. Lyanna was betrothed to a great lord herself, Robert Baratheon Lord of the Storm’s End. And yet they did the same as their son and Ygritte, they eschewed the things in their lives holding them down and ran off to be together. And the realm burned and bled over that choice.

Getting back to the Night King and his Queen though, what this ancient myth of pursuit, love, and tragedy is telling us is that at their frozen hearts, the White Walkers were people too once. They went into caves and wish they had never left. They laid blue winter roses on the laps of the girl they would come to love. We’re all very used to the icy visage of the show’s Night King leering at his enemies and commanding his hordes of the dead at this point, yet forget the scared man tied to a tree that had obsidian shoved into his chest. What was his life before that moment? What made his heart-break as the stories tell? Was he, as Old Nan tells Bran, a Stark of Winterfell too? 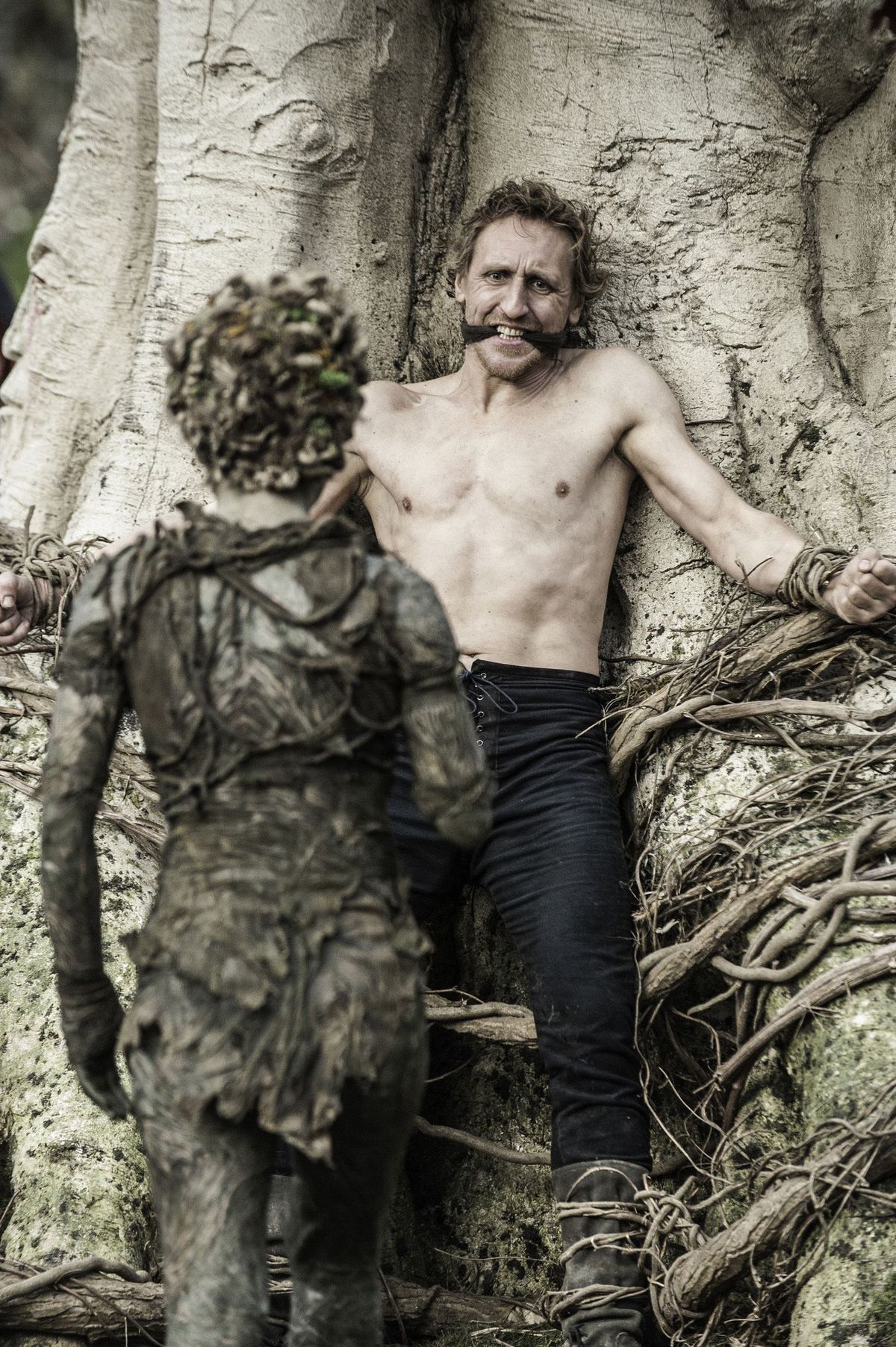 “Some say he was a Bolton,” Old Nan would always end. “Some say a Magnar out of Skagos, some say Umber, Flint, or Norrey. Some would have you think he was a Woodfoot, from them who ruled Bear Island before the ironborn came. He never was. He was a Stark, the brother of the man who brought him down.” She always pinched Bran on the nose then, he would never forget it. “He was a Stark of Winterfell, and who can say? Mayhaps his name was Brandon. Mayhaps he slept in this very bed in this very room.”

Perhaps like Jon Snow, he too lost his love and figuratively and literally had his heart turned to ice in his pain. It’s telling that we have never seen a female white walker anywhere either. Maybe because the true King of Winter couldn’t bring himself to make even an icy Galatea of his long-lost love. Or he’s still seeking her, the cold woman with the blue eyes beyond the Wall that he caught once and loved and lost. At the core of this character’s story and his motivations, there should be something knowable and human driving his intense need for revenge and  conquest. Heart break, loss, despair. He wants something, whether it is trapped in the Crypts of Winterfell or revenge on his own kind for intense loss. After all, no villain truly sees themselves that way. They’re the heroes of their own stories, what they are doing makes sense in some way. If the Night King finally speaks in this coming season, perhaps he will only speak a name.

Rubies flew like drops of blood from the chest of a dying prince, and he sank to his knees in the water and with his last breath murmured a woman’s name. – ACOK Daenerys IV