Doomed character spotted in Zumaia & Four characters on new quest (SPOILERS!) | Watchers on the Wall | A Game of Thrones Community for Breaking News, Casting, and Commentary

Production moved from Biscay to Gipuzkoa this weekend and it has not been idle since. Zumaia has been witness to friendly and tense reunions and a momentous convergence. Today, on the third day of filming at Itzurun beach, is no different, as a main character whose fate was perhaps thought of as doomed last season returns to the narrative, and joins three other main characters on a new quest to parts unknown.

Yersterday Iain Glen was spotted in Bilbao, so it wasn’t so shocking when, this morning at the Dragonstone set, Ser Jorah Mormont reported for duty, ever faithful to Queen Daenerys Stormborn (well, not “ever faithful” —More like “since mid-season one.”)

El Diario Vasco reports on the scene, in which Jorah isn’t actually arriving —He is leaving. This not only tells us Jorah at some point returns to Daenerys but that he later leaves. First, Mormont is seen talking to Tyrion as Daenerys approaches, escorted by a retinue of Dothraki, including season six’s bloodrider Qhono played by Staz Nair. The queen says farewell to her advisor, who in turn vows to his queen. You may notice Daenerys is wearing the same outfit as yesterday, but this time she is sporting a red cloak instead of a white one. So that’s it: At long last, Daenerys Targaryen dresses in her colors, black and red. Jorah’s new outfit is just as exciting, inasmuch as Jorah has a new outfit, after wearing the same yellow shirt for so many years. I’m pretty sure it was white at first!

If you want to see the outfits in more detail, The Daily Mail has what you are looking for: 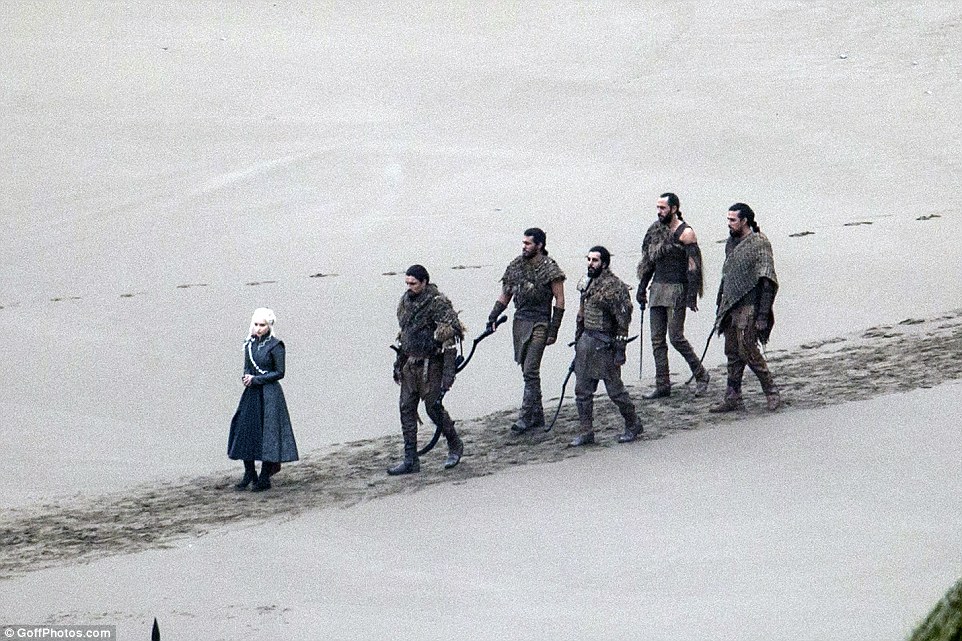 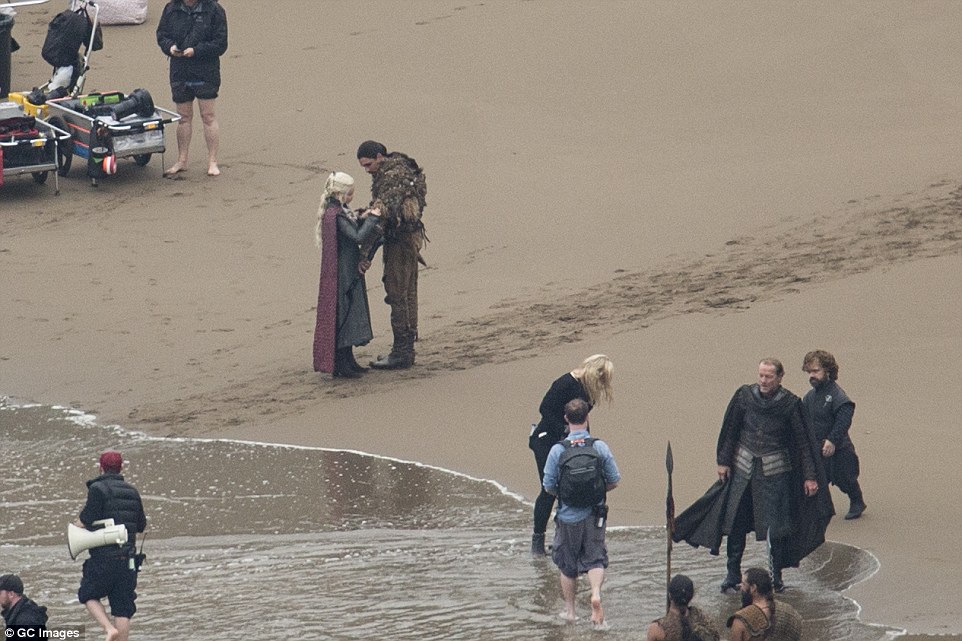 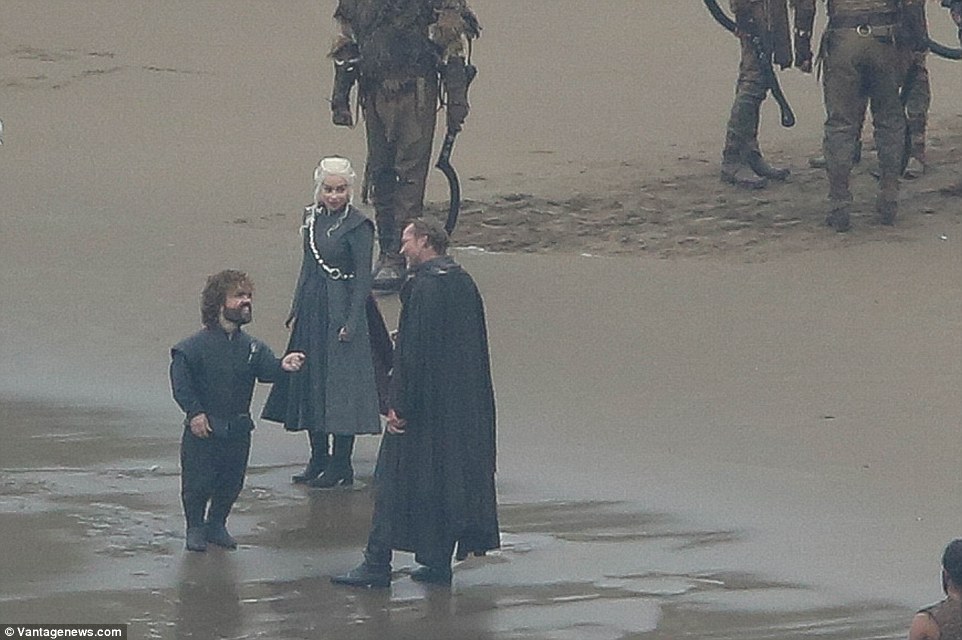 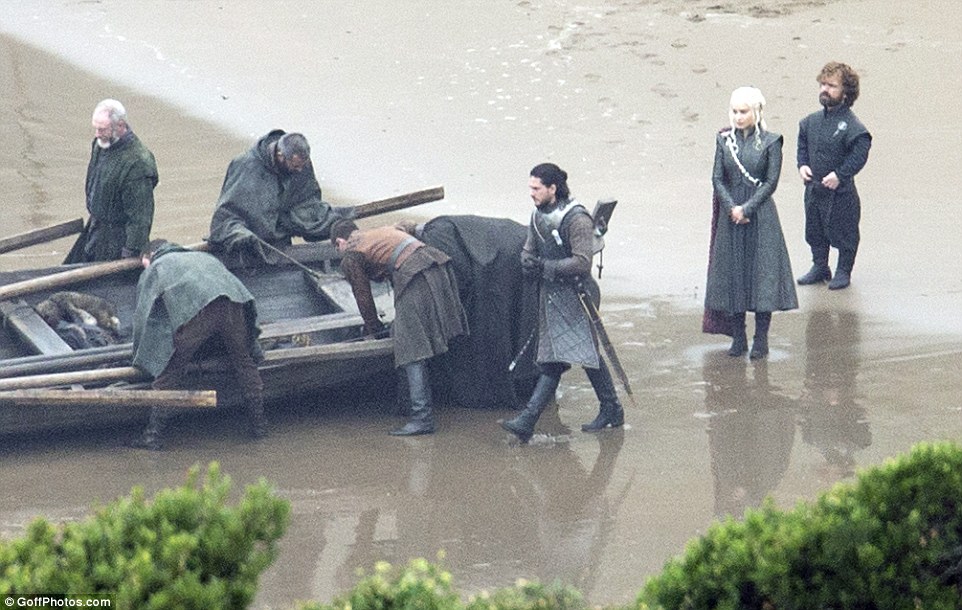 UPDATE: New pictures of uncertain origin have surfaced in a Emilia Clarke fansite, including ones showing Gendry‘s outfit in more detail and director Matt Shakman: 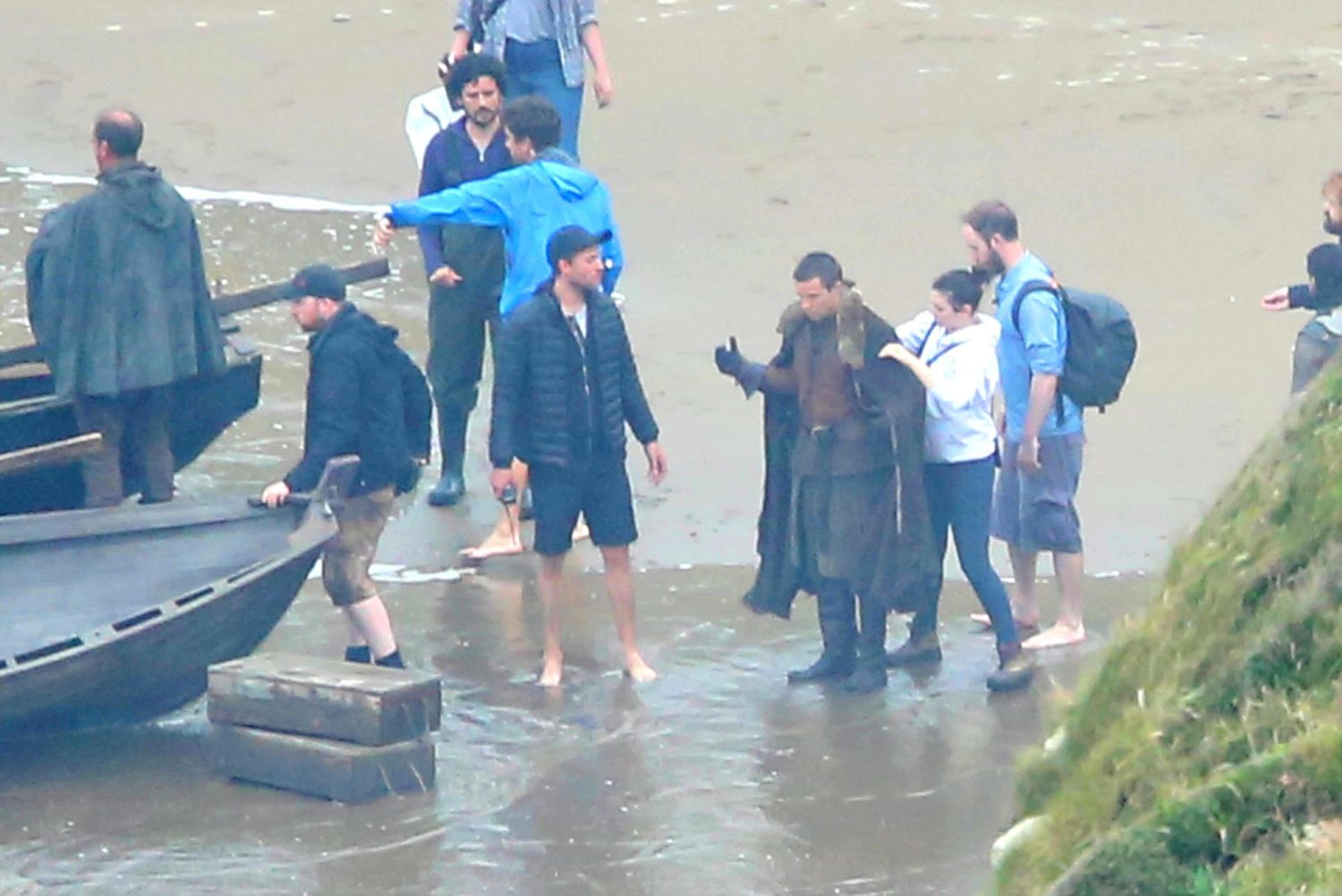 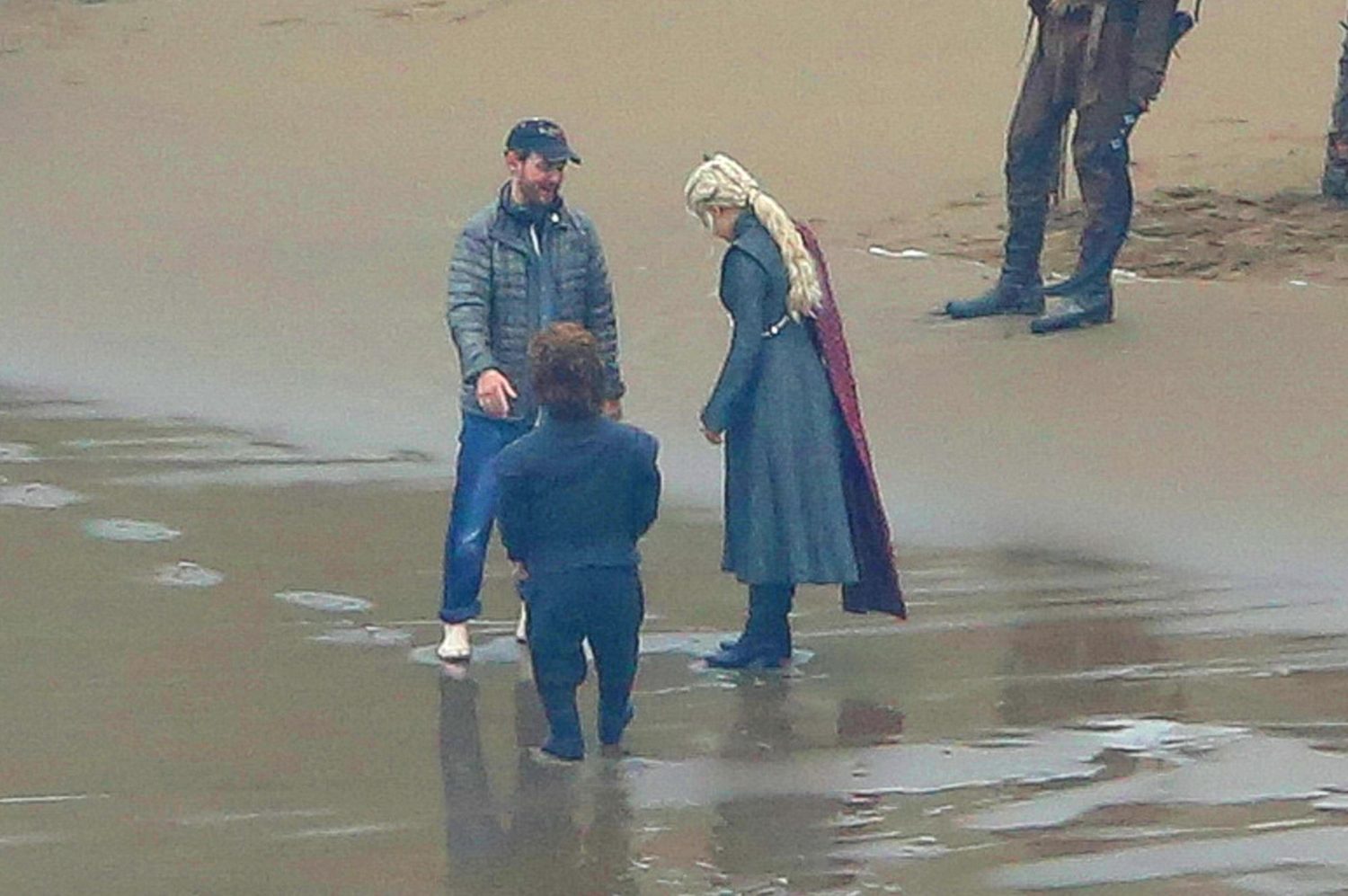 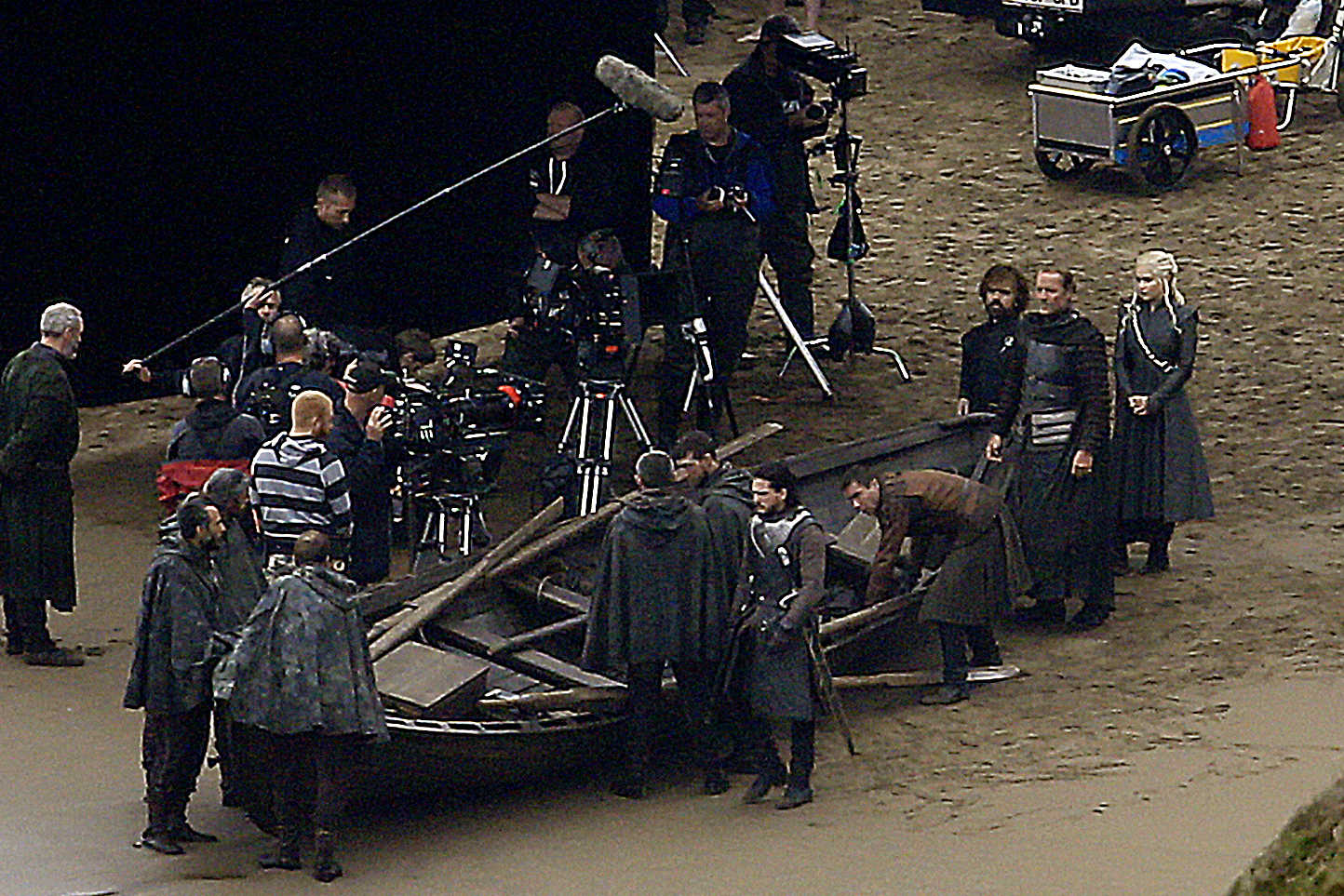 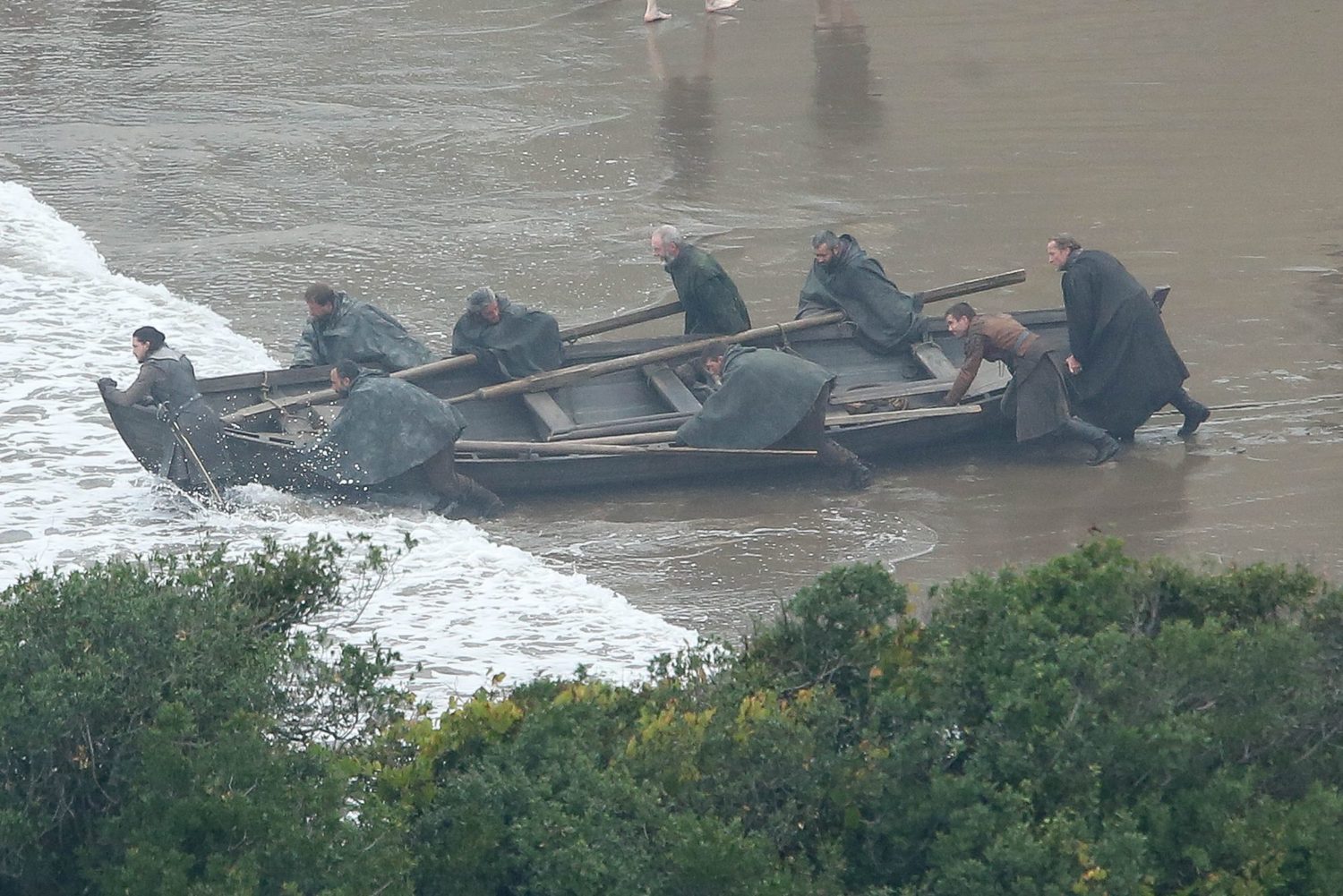 As the scene goes on, Daenerys turns to Jon. Meanwhile, Jorah helps some men prepare the boat. Among these men you may notice Davos and none other than Gendry, which confirms what we already suspected: Once Tyrion and Davos flee King’s Landing with Robert’s bastard, they take him to Dragonstone. However, the scene does end surprisingly as Jorah, Davos, Gendry and Jon push the boat and go away together.

Has Jorah cured his greyscale already, or did he fail in his mission but returned anyway? Did Daenerys simply want to give a purpose to a doomed man, expecting this quest would be his last, or did she actually have hope he would succeed in curing his ailment? What must also be considered is the relationship between Jeor Mormont and Jon Snow, who was gifted Longclaw by the Old Bear. Will Jorah clash with Jon over the Valyrian steel sword? Could the apparent “North-meets-South” angle of this coming season mean Jorah may eventually meet his fiery, precocious cousin Lyanna, the Lady of Bear Island? What is the new quest involving King Jon, Ser Jorah, Ser Davos and Gendry?

These are exciting questions, and I hope the community is eager to find possible answers in the comments. However, please be considerate: Those who read this particular spoiler may not be aware (or even want to be aware) of other spoilers, so let’s only discuss what is pertinent —That is, what is revealed and discussed here, no more. ANY discussion outside the purview of this article MUST be properly spoiler-tagged.