House of the Dragon moves south! We last saw Matt Smith in Cornwell, shooting a scene as Daemon Targaryen at a war council by the sea, likely during the War for the Stepstones. Now, the Rogue Prince is flying south — to a castle in Spain, or whichever part of Westeros it will turn out to be! Also in Spain: Cáceres returns as King’s Landing!

Before we move on to Spain, this past week a large tent set was erected in Aldershot, a village in the South East English county of Hampshire, featuring Targaryen flags galore.

Game of thrones prequel being filmed in the woods I’m my hometown pic.twitter.com/qAbAin5NTp

In this set, which looks more like the grounds for a tourney than a military camp, one of the carriages was emblazoned with a new design for House Strong’s sigil, just a few days after we learned that many characters of said House will be present in the show: 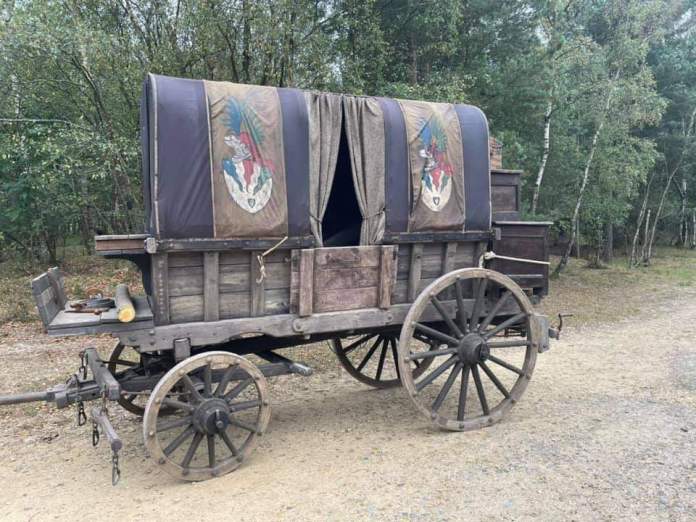 Now, let’s move to the south of Spain, which has been a hive of activity for the HBO production these last few days. As originally reported by our friends at Los Siete Reinos, filming started this past weekend at the Granada province’s imposing La Calahorra Castle, which sits at the foothills of the Sierra Nevada mountain range.

Several of House of the Dragon‘s cast and crew, as well as a lot of filming equipment, have been present at the castle, most prominently Matt Smith, who plays Daemon Targaryen:

It’s not yet clear which stronghold this Andalusian castle will portray, though we of course welcome your speculation in the comments section. Keep in mind, however, that a castle’s outward appearance doesn’t necessarily reflect what it will eventually look on screen. Or at least that was the case back in the days of Game of Thrones! For example, when they filmed at the nearby Castillo de Trujillo for season seven, the castle didn’t end up being a castle at all, but the southern walls of King’s Landing instead.

A much less mysterious shoot is that which will take place in the old town of Cáceres, which was famously used to depict the streets of King’s Landing leading to the Red Keep, when Euron brought his captives as an offering to Cersei in season seven (it was also briefly Oldtown). The very same streets that Euron marched on will be walked on again by the characters of House of the Dragon, starting on October 11, and going on for about a week, including five night shoots, according to Spanish newspaper Hoy.

Thanks to local fan Javi Borrega, we have an even closer look at what the production is building in Cáceres, including —rather curiously— a fountain adorned with lion statues:

As this will be a street shoot, it’s likely there’ll be more leaks than usual. In fact, last time they were in Cáceres we basically saw the entire scene of Euron marching with Yara, Ellaria and Tyene as captives. So be sure to check back when filming starts!

After Cáceres, filming will move on to Portugal, which will represent Westeros for the first time, as we reported back in July: less than two hours’ drive from Cáceres lies Monsanto and its impressive castle, where filming will take place at the end of October.