The White Wolf and the Crippled Kraken | Watchers on the Wall | A Game of Thrones Community for Breaking News, Casting, and Commentary 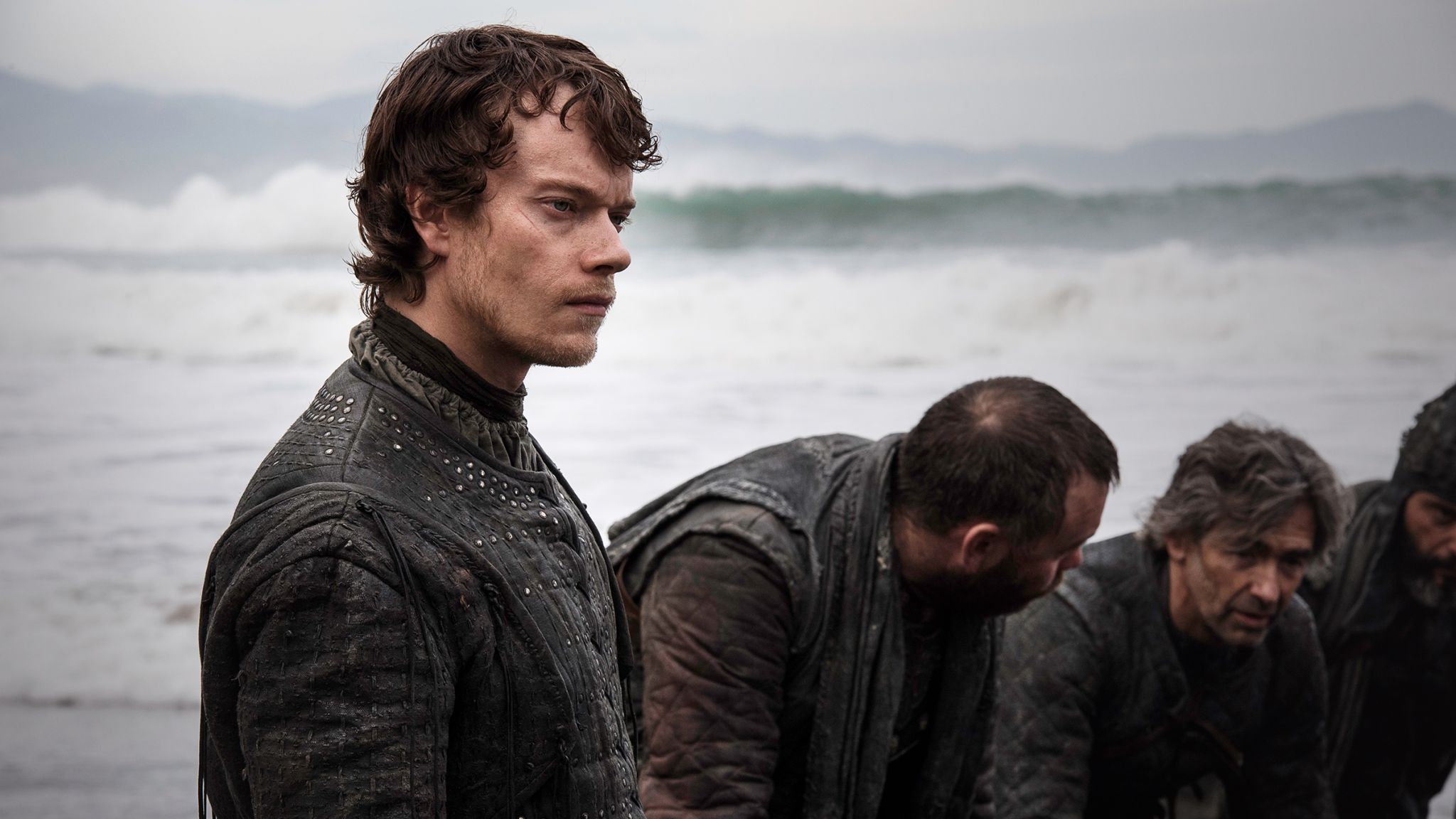 “The Night’s Watch is an ancient and honorable order. You’ll have opportunities there.”

“The opportunity for Jon Snow to cut my throat in my sleep.”

“The opportunity to make amends for what you’ve done.”

The most recent episode of Game of Thrones featured a moving reunion between Stark siblings in Winterfell. Bran, Arya, and Sansa Stark all have managed to navigate through their personal diasporas to return home with power: magical, martial, and political.

Arya: I ended up with magical and martial abilities!
Sansa: Well, now you’re bragging.
Bran: I also have the history channel.

As delightful as it was to have three Starks in the same location without someone being executed or betrayed (at that moment at least, the season isn’t over yet…) another type of family reunion was happening on Dragonstone. Jon Snow was on hand to greet Theon Greyjoy, freshly pulled from the sea and returned to Daenerys Targaryen’s island fortress.

For a moment, I was convinced that Jon Snow was going to kill Theon. 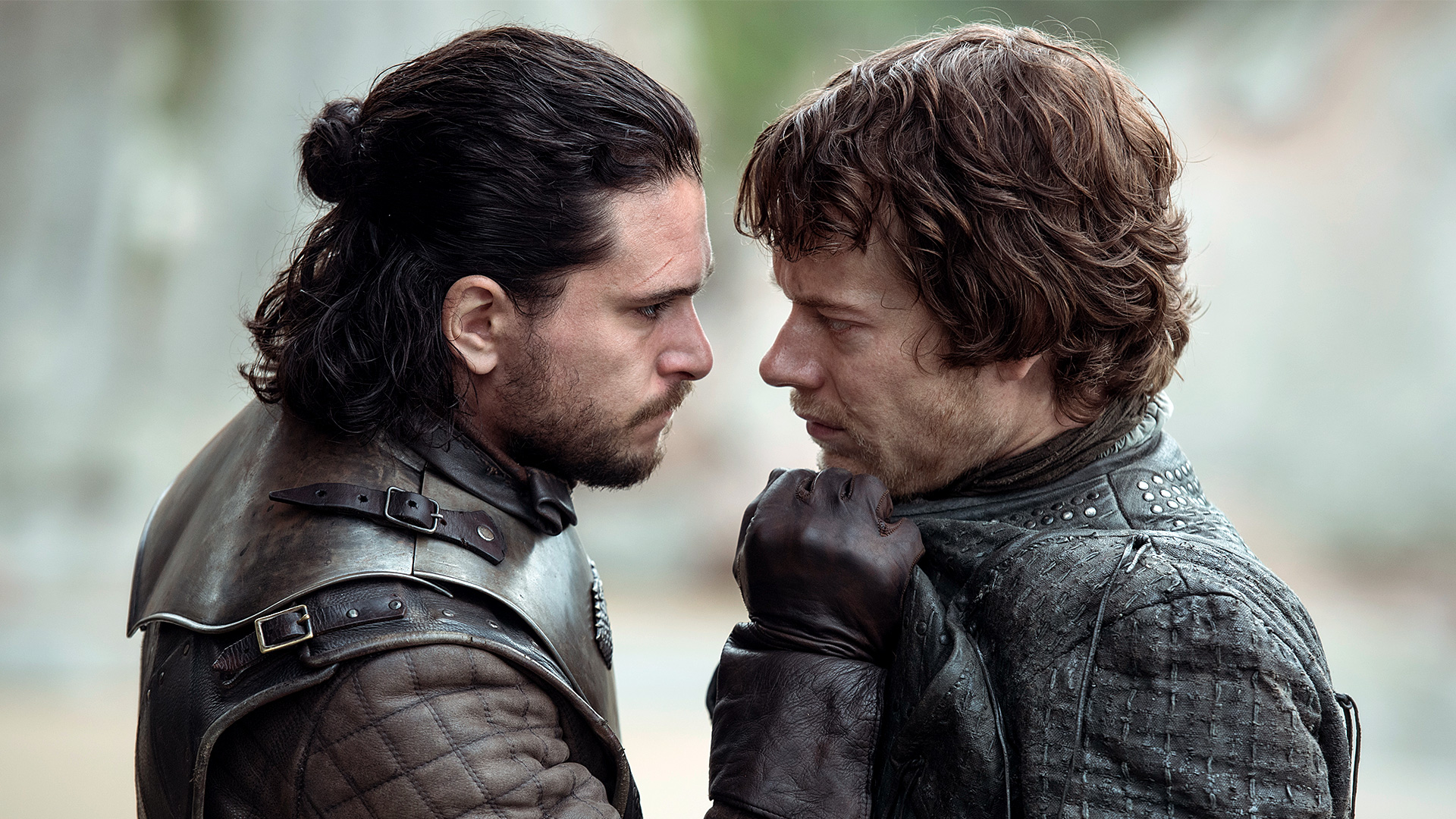 I was as much on the edge of my seat as I was when Bronn was aiming Qyburn’s scorpion at Drogon, or when Jaime was rushing like a beautiful fool full-on towards scaly death. I didn’t even know that I had been anticipating a Snow-Greyjoy reunion for seasons.

Theon: Jon. I didn’t know you were here.
Jon: OBVIOUSLY.

I love Jon Snow. He’s good and decent, but he’s not particularly complicated. Not in the way that a grey character like Jaime Lannister is.

I love Theon Greyjoy as well, but it’s love of a different kind. I love Theon’s character and narrative arc. Theon is very complicated.

Jaime: Theon might even be more complicated than myself.

But Theon’s not much of a heroic protagonist. Between Jon and Theon, each has something the other lacks. From a narrative/character perspective. (I’m not making a penis joke here.)

Why should I get so excited about Theon and Jon meeting up in particular? It’s because they’re very similar characters, with similar narrative beats. Both are essentially war orphans brought to Winterfell, to be raised under the same roof with a suspicious and withholding Catelyn Stark. They  both had ambitions with high expectations, but found themselves among unexpectedly shady company, forced into tough choices.

They both ended up killing mentor figures. They’re both guilty of killing children. 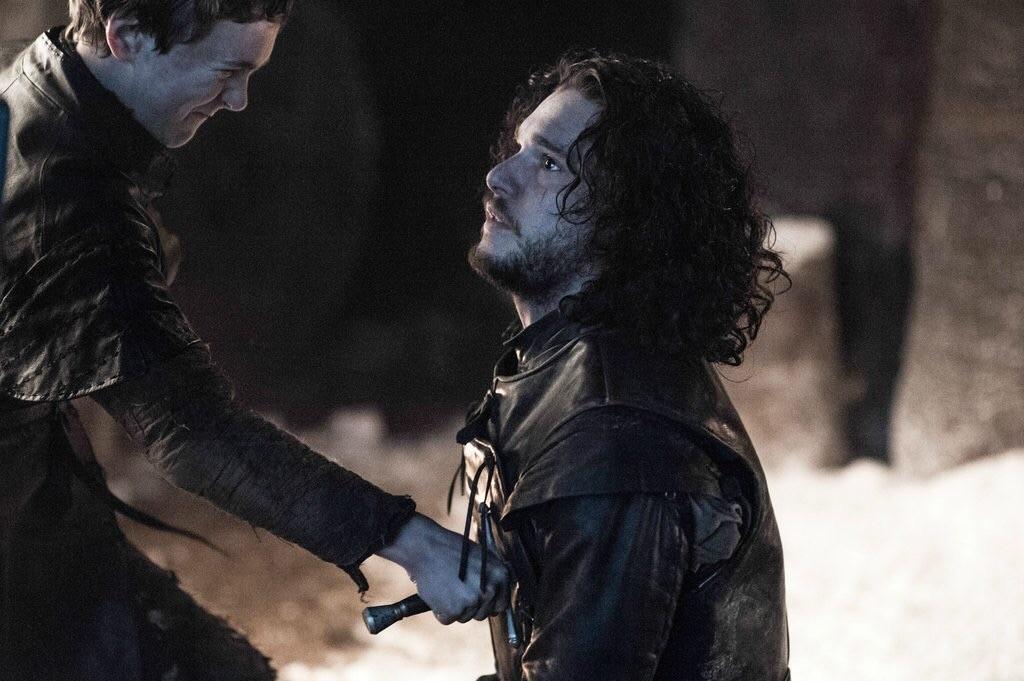 Theon: You killed a kid? Well, not so high and mighty now, are you Jon?
Jon: Well, he killed me first.
Theon:
Jon: I got better.

They were both betrayed by men under their command, and were butchered. (Allow me some dramatic license in what I’m saying, you know what I’m getting at.) And they both came back from an ordeal.

These (arguably superficial) similarities aside, Jon and Theon are different, but it’s the two-sides-of-the-same-coin difference, the way Arya and Sansa are different but share characteristics you’d expect from the daughters of Catelyn and Ned Stark.

Jon and Theon’s stories have been forged from their choices of weighing duty versus love, or duty versus honor.

Theon is almost a cautionary tale for Jon. A there-but-for-the-grace-of-God-go-I figure. Theon’s life is a fate that Jon has avoided. Conversely, Jon is representing the destiny that Theon failed to achieve.

Theon went as an emissary from Robb Stark to his home in the Iron Islands with the ambition of becoming a king one day. He expected that his father Balon would side with King Robb against the Lannisters and the crown, and would be a king in his own right. Prince Theon, being Balon’s heir, would eventually be king afterwards. But thanks to a series of unfortunate choices, Theon became a tortured wretch instead. To clarify, he did not become a king.

Coming back to Dragonstone after a disastrous sea-battle, Theon encountered not just the bastard boy of Winterfell, but the King in the North. When last Theon saw Jon, the black sheep of the Stark household had left his home to go join up with landless nobodies and thieves to serve at the Wall. But fortune had elevated Jon to the dream job that Theon would never be able to seize. Jon was not a nameless monastic in black. He was a king. 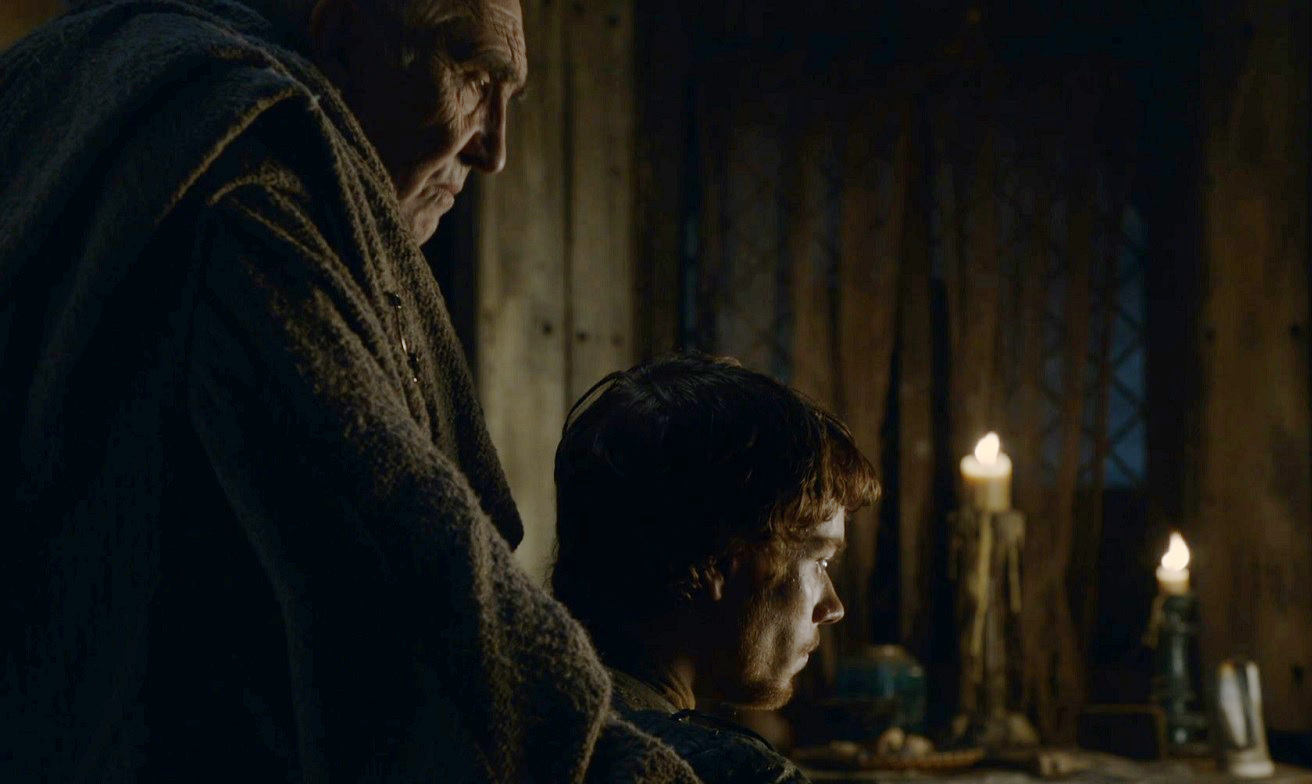 At one point, Theon could have gone to the Wall as well. After capturing Winterfell and subsequently finding himself effectively imprisoned there by besieging Boltons, Theon heard counsel from Maester Luwin to abandon Winterfell, to escape and flee to the Wall. To take the black and have his sins erased.

Theon refused, because Jon Snow was at the Wall. Jon was a bogeyman that Theon refused to face. He would rather die in battle than be murdered by Jon in his sleep.

But by choosing to avoid Jon Snow, Theon fell into the clutches of a truly nightmarish figure, Ramsay Snow.

In many ways, things have now come full circle. Theon recently chose to avoid engaging with his terrifying uncle Euron (I’m not chiding Theon for his choice, it probably saved Yara Greyjoy from an immediate death) and risk his fate to the seas. Yara’s surviving Ironborn fished him from the water and brought him back to Dragonstone. And back to his first fearful nemesis, Jon Snow. The man he had avoided years ago, which set him on the path of torture and despair.

Although I enjoy the similar beats in these two characters’ respective stories, and this kind of possibly predestined narrative intersection, I’m also willing to admit that I might just be cherry-picking coincidences. There are a lot of characters in Game of Thrones, and those that live long enough are going to experience similar events with other long-lived characters. Those common experiences might suggest a pattern that really isn’t there. 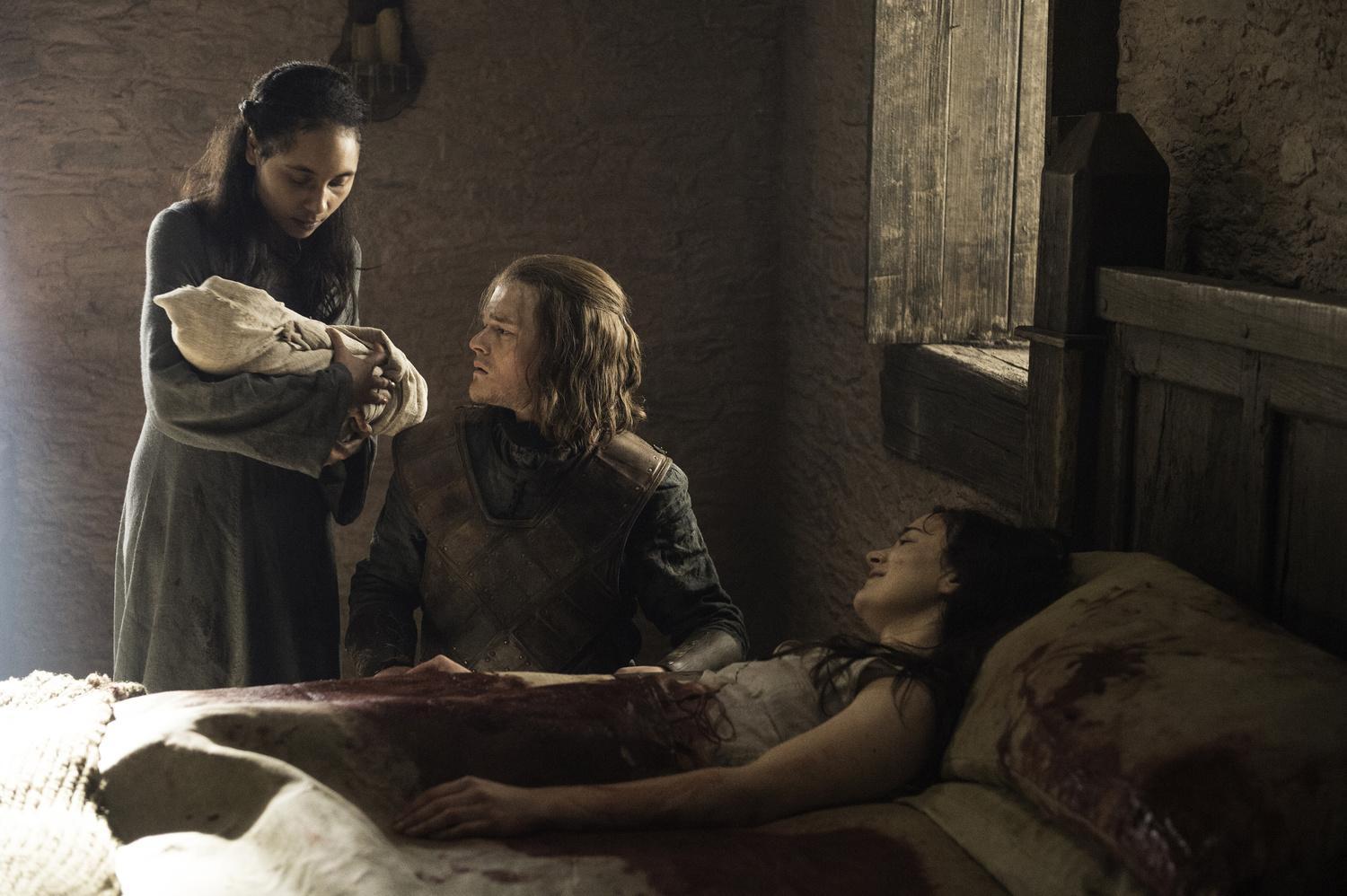 But there’s no fun in dismissing what might just be coincidence. Let’s treat Jon and Theon’s stories as relevantly similar.

Theon: Honestly, this is becoming as torturous as a session with Ramsay.
Jon: Couldn’t we spice up this tale with some of Old Nan’s giants?
Me: Quiet, both of you. I’m about to get crazy.
Jon: About to?

There’s enough mystical import and mythic symbolism around Jon to suggest that he’s got a personal destiny with a capital D. He already has a secret identity as the possible son of Rhaegar Targaryen and Lyanna Stark. Jon was brought back from the dead, and not as a mindless wight. And he does have that supernatural hair. Jon’s clearly special. But, could Theon also share in this destiny?

Theon: His hair isn’t that great.

Jon’s got a particular struggle. He was raised from the dead, so I think it’s reasonable to assume that he’s living on borrowed time. He has to achieve some kind of purpose, or what was it all for?

As well, he has to avoid botching things somehow. Like the son in the story of The Monkey’s Paw (or in Stephen King’s Pet Sematary) sometimes “dead is better.” It’s quite possible that Jon was brought back to life to give us hope that he’s there to save the day, but is instead the bringer of doom somehow.

Theon has a different struggle in that he’s already made his catastrophic mistakes. It would almost be a mercy for the character to be bumped off.

During the third season, during Theon’s extended and unrelenting scenes of abuse by Ramsay, some viewers hoped Theon would die. (Earlier, they might have been rooting for him to die as justice for his actions in Season Two. After a season in the basement of the Dreadfort, hopes for his death were fueled by pity.) Now Theon is struggling to redeem himself, or as Maester Luwin said, to make amends for what he had done.

It’s like Jon and Theon are doing the same thing from different directions. Either not trying to make a mess, or trying to clean one up.

When people talk about Jon Snow being a candidate for Azor Ahai, the Prince that was Promised, or possibly Jon along with Daenerys the Princess that was Promised to be some kind of multi-person Azor Ahai plurality, I like to sneak Theon in as well. “Born in salt and smoke” could probably apply to him (because prophecy is so vague that it can be applied to anyone, really.)

So I was worried when Jon and Theon were face-to-face. Jon has a just cause to kill Theon. But Theon helped Sansa escape from Bolton-held Winterfell and was willing to be taken back to Ramsay in the hopes that the Bolton men might not find her. Due to his service to Sansa, Theon earned a reprieve from Jon, if not forgiveness.

“I let Dagmer slit their throats, and I let him burn their bodies. So I could keep Winterfell and make my father proud.”

“It is. My real father lost his head at King’s Landing. I made a choice, and I chose wrong. Now I’ve burned everything down.”

“Not everything, my lord.”

— Theon and a rather deceptive Ramsay

Not everything might be burned down for Theon. Jon has the supernatural Night King to contend with, and Theon will need to find a way to overcome his uncle and save his sister, Yara, the last person who might give a damn about him. 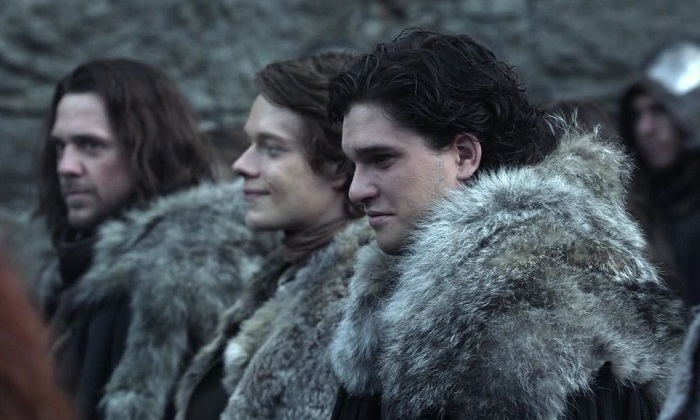 Jon’s story is writ large on an epic scale. Theon’s story is a bit smaller in scope, but his abilities and resources (personal, emotional etc.) are so limited that he might as well be facing a horde of crazed wights.

Jon will no doubt be soon called away to the North, and Theon to the seas for Yara, but I would be surprised if their stories did not intersect again in some relevant and satisfying way. I mentioned at the top that their meeting was a family reunion of sorts. They each have the Starks as family, with Theon their foster-brother, and Jon their acknowledged half-brother.

Bran: I feel I have something to add about that, but I’m too busy being cosmically aware about stuff.

Whether they choose to accept this indirect and transitive familial bond or not, there’s a narrative thread that connects the wolf and the kraken. For good or ill.