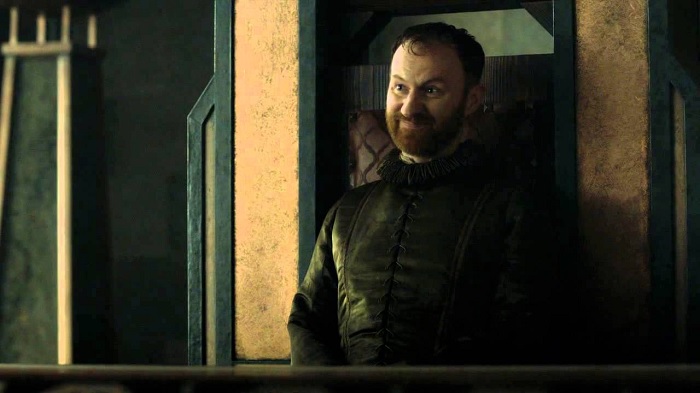 Mark Gatiss publicly confirmed his return as Tycho Nestoris the Iron Banker for the seventh season of Game of Thrones in a new interview with Express, this weekend.

“Yes, I did it in Belfast last year. I can’t tell you anything more obviously, mostly because I don’t know anything.”  He tells Express, “It was lovely. What I love about it is that I don’t have any stake in it.”

That would be quite a change for him. While Gatiss is a successful actor, he often wears multiple hats, writing several episodes of Doctor Who, and writing and executive producing the international hit Sherlock.

But when it comes to Game of Thrones, Gatiss says, “I honestly don’t know the ins and outs. People ask me this, that and the other, I haven’t got a clue. I’ve done four episodes now and there’s two more they think. It’s a huge saga and I don’t know and I rather like that. But I’ve had a lovely time.”

Gatiss has appeared in two aired episodes of GoT to date, and our sources confirmed for us that he’s set for two episodes in the middle of season 7. So the actor’s remarks are intriguing- it sounds as though the showrunners have already confirmed for Gatiss that he’s in two season 8 episodes!

As we reported last November when we first noted his return, Tycho Nestoris will visit King’s Landing to call in the Crown’s debt to the Iron Bank.

Gatiss also had this tease for Express. “The last scene I’m in with – I probably can’t say because it would be a spoiler, wouldn’t it?”

Given that he’s visiting with Cersei and the Crown, he just might be referring to Lena Headey. But we’ll see, won’t we!