UPDATED! Game of Thrones cast convenes in Seville as filming begins; A surprising guest actor returns (SPOILERS!) | Watchers on the Wall | A Game of Thrones Community for Breaking News, Casting, and Commentary 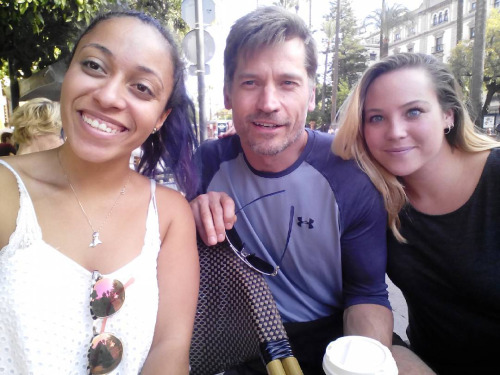 Game of Thrones moves south and most of the main cast coalesces in Seville as filming begins in the Andalusian capital. We also get a clearer picture at Daenerys‘s dress! Finally, as the only spoiler for today, we tell you about the surprising return of a guest starring character who many of us assumed would never make another appearance. Only read until the red spoiler warning if you don’t want to know more!

First, let’s time travel to last week, as David Eagleman visited the set at Itzurun beach. Aside from a photo with the showrunners, Benioff and Weiss, Eagleman shared one with Emilia Clarke which offers our best closeup at one of Daenerys’ season seven outfits.

Now, on to Seville for the myriad of sightings of the recently arrived cast members, especially Nikolaj Coster-Waldau, who arrived a few days ago and appears to be quite eager —or at least has the eternal pacience needed— to take pictures with all his fans. Iain Glen has also been in the city for a while with his family. However, as his children appear in the picture, we will not share it out of respect for their privacy. Pictured below with Nikolaj you will find Gwendoline Christie and Pilou Asbæk, who plays Euron.

We have it in good authority that the strangest parental relationship in the show (which is saying something) will also film in Itálica’s amphitheater and Seville’s Royal Shipyards: Anton Lesser and Hafþór Júlíus Björnsson are to travel to Seville. That is, Cersei’s new Hand Qyburn and his creation the FrankenMountain. What about the Mad Queen? We have no pictures yet, but it appears Lena Headey will film in Seville too.

Also, Emilia Clarke, Kit Harington, Peter Dinklage, Nathalie Emmanuel, Liam Cunningham, Conleth Hill and Alfie Allen have been sighted en route to Seville. There are also reports of other actors, but these are unconfirmed and should be discounted as false alarms for the moment. Still, it’s unprecedented for so much of the main cast to be together, especially at a foreign location, yet there they are. Take a look!

UPDATE: Surprisingly, Rory McCann has been spotted in Seville, amongst others, including Jerome Flynn, Daniel Portman and Hafþór. See for yourselves:

Jerome Flynn is also in Sevilla (photo by @salolainus) pic.twitter.com/sp6EEsNbeb

Liam was there too but well we all knew he was. (Photo via @salolainus) pic.twitter.com/L2bDTtG7Fx

Whatever these actors may be filming in and around Seville, we now know exactly when, thanks to Los Siete Reinos. As we suspected, Itálica comes first: Production will focus on the amphitheater this week and then film at the Royal Shipyards on November 8th, which also happens to be a fateful day for the future of our world (Vote, Americans!)

Finally, let’s move on to the spoilers. Stop reading if you don’t want to know any more! Here be dragons! If not even the mysterious nature of this coming together of the cast holds your interest, we bring you a spoiler from season seven that may do the trick. Watchers on the Wall sources told us that the Iron Bank of Braavos will rear their greedy head this season, and we know exactly how: Tycho Nestoris, played by Mark Gatiss, will make a house call to King’s Landing and warn Queen Cersei that their debt to the Iron Bank is due. This is not a strange narrative detour or a cameo, either: We’ve learnt that Cersei’s way of dealing with the debt will have substantial ramifications in the story. Knowing Cersei, I doubt she will choose the more peaceful approach available.

For those keeping up with spoilers, this deluge of actors in Seville is even more telling. There are seventeen confirmed characters present at the massive Dragonpit scene: Queen Cersei Lannister, Ser Jaime Lannister, Qyburn, Ser Gregor Clegane, Ser Bronn of the Blackwater, King Euron Greyjoy, Queen Daenerys Targaryen (“titles, titles…”), Tyrion Lannister, Ser Jorah Mormont, Missandei, Varys, Theon Greyjoy, King Jon Snow, Ser Davos Seaworth, Brienne of Tarth, Podrick Payne and Sandor Clegane. There may even be more to come! Nothing like this has happened in Game of Thrones ever before. The closest the show got was when the cast was much smaller and two thirds of it came together at Winterfell in the very first episode. Not even the crowded Purple Wedding comes close. This scene promises to be eventful, to say the least.

Let’s discuss: What do you guys think unites so many starring cast members in Seville? What will Cersei do when our dear old friend Tycho informs her of the debt deadline? Remember to refrain from any mention of the unreported leaks about season seven. That belongs in the forums, where you will find a vibrant conversation on the topic.