Looking Forward, Game of Thrones Season 5 Part 4: The Trailer of Tears and the New North | Watchers on the Wall | A Game of Thrones Community for Breaking News, Casting, and Commentary 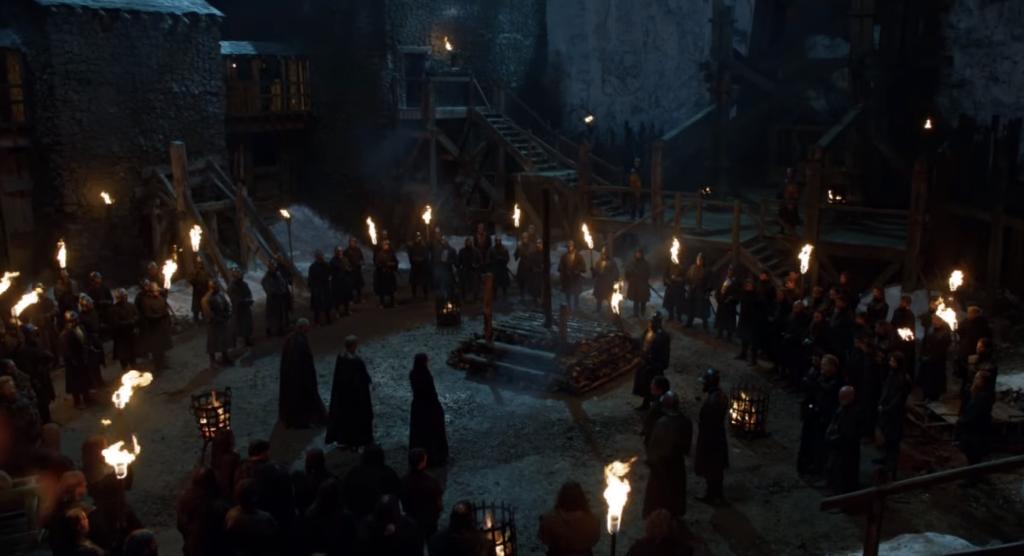 Oh yes… can you hear it? The bells are tolling. For whom you ask? For you. For me. For Tywin.

The time is upon us. And in nine short days we shall reconvene and commence in discussion related to 501, all at our new home at WotW. It is predominately the reason this Wall was built. Our first season at the new apartment is coming… now is the time to prepare.

Decorate your House. Fly your banners. Prepare your meals. And take in Unsullied trailer thoughts, because they just haven’t been dissected enough…

Welcome to Looking Forward, where Unsullied rule is invoked and we shall forever demand trial by combat (that three-judge shit is for the ravens).

Why a “trailer of tears?” Why is a man secreting liquid discharge from his eyes? A number of reasons… tears of joy; tears of happiness; tears for whatever the hell that is in the picture on top of this post.

We’ll get to it momentarily. But first…

First and foremost, we know that Dany aims to break the wheel assuming her wheel doesn’t get broken first. But we’ve discussed her, and I still believe that her storyline has the potential to be the most intriguing of S5 despite our variation of personal feelings regarding Khaleesi.

I’ve commented on this in the past and my stance on this is firm: If Red Velvet sacrifices Shireen in the name of the Lord of Light, or for the sake of Stannis’ claim, or for any damn reason, you may see a man unleash hell on someone’s ass. I don’t know what that means, but you get the point.

Perspective: Yes, it’s a TV show. A fantasy-based TV show. And the show has a track record of harvesting emotion and fondness for its characters only to see them have their heads smashed into small projectiles.

But that is exactly why I have reason to believe it is inevitable. And killing little girls in the name of power is ruthless, even if you are Stephen Dillane. The stage has already been set. Velvet will believe she is doing the child a favor since the past victims of sacrifice are in a “better place” and the only “hell” is the one they live in now (Ep. 402).

Mommy dearest Selyse will presumably allow it (since she allows pretty much everything else), while Stannis will be coerced into believing that it is the best solution for everyone.

And Davos will be outraged. Again.

Hopefully, this assumption is wrong. Maybe this framework is for something else entirely. But Shireen was dragged north for a reason, and it wasn’t to battle Wildlings or due to a shortage of babysitters at Dragonstone.

Then again, maybe it’s for Jon Snow. Mel has her eyes on him, and Jon may have a natural affinity for reds. In the clip, she is about to get naked with somebody (Giantsbane?). Most likely, no. But it would be entertaining nonetheless.

If it is Jon Snow, then here are a couple of potential spin-offs (feel free to insert your own): A Song of Snow and Fire or Red Wedding 2: Leeches on Snow. We’ll poll it later for no good reason.

Tommen and Margaery take the plunge because there remain at least two ways to bond Houses in Westeros… take it by force or force it by marriage.

One would think that the ceremony alone would hold very little dramatics (haven’t we endured enough epically tragic wedding episodes?) dependent of course on the amount of wine consumed by the mother of madness. I think it is safe to assume that pigeon pie will not be included on the caterer’s menu options.

But the merger itself is intriguing due to the involvement of Lysakiller (many of you still refer to him as Littlefinger), and his new “friends.” LK>LF. And since this new friendship is blossoming, it would not surprise me to see LK/LF back in the KL to see the Tyrells while keeping it on the DL and checking on his broth-els while the knights of the VL ride into the…. Is that the Dreadfort?

Regardless, LK is on the prowl once again and we know his capabilities. He started this shit storm in the first place, not to mention throwing a mentally ailing woman out a moon door. Shithead.

And where does this leave Sansa? At one point she and LK are involved in deep discussion about avengement on a hillside that looks similar to that of where Ramsay became a Bolton. And it seems like a “parting ways” kind of speech (maybe with another LK smooch in tow). You hear that? It is the Sugar Daddy radar going berserk. The location could lead one to believe she is heading to Winterfell or at least somewhere to north, most likely with a trail of Vale knights on her heels.

And then there it is… Sansa is briefly shown underneath what appears to be Winterfell, and I can’t wait to see how the hell that happens. Otherwise, she is shown in a dark room with candles. But hell, that could be anywhere. The Eyrie. The crypt. The Dreadfort. The dungeon at KL her father sat in if they installed a bathtub. The Sullied likely know. The Oz knows nothing.

One of my biggest questions from the trailer is, who are the men in black confronting Tommen on the steps?

Don’t answer that either.

In theory, King’s Landing could be a vulnerable location in S5 with no Tywin, Tyrion, or Varys there to play the Game.

And IF Jaime and/or Cersei are gone to Dorne (judging by Jaime’s dapper assumingly Dornish attire), there could be an open door for Red Keep conflicts (enter LK). You have to believe that one if not both Jaime and Cersei are going to retrieve Myrcella and save her from the backlash of the death of Oberyn.

Speaking of Dorne, it looks fantastic. And if meeting Doran is half as good as when we met the Dead Viper, then we all have something to look forward to.

I’ve got a million questions about Dorne but know very little of substance. I do recall that Oberyn had 8 children and only three have been shown in the previews, also known as “Sand Snakes” (or what I’m sure will be redundantly referred to as the “Charlie’s Angels” of Dorne). There will be an explanation regarding the number, right? Because, you know, details.

Moving on, either winter has come quickly or Brienne and Pod have also traveled north, even as far as the Wall.

More importantly, we get the first inclination that Stannis and the Wildlings might join forces through the words of Jon. And honestly, this makes a lot more sense than fighting each other when ol’ Blue Eyes and company are closing in.

What difference does it make now if the Wildlings are on the south side of the Wall? Yes, I know they are Wildlings. And I know they’ve killed innocent men, women, and children. They’re not Nicelings, or Cordiallings. And I’m sure they will hold a grudge for a long time for being trapped behind a cold wall and will eventually demand reparations.

If the frozen (let it go) enemy is as dangerous as advertised, surely Stannis possesses the logic to make the informed decision that joining forces may in fact be the most strategic choice, assuming of course that Mance will go along with it (under terms I’m sure). Unite the clans = the Stannis Clannis.

However, maybe the most compelling part to the “new” north is a potential confrontation between James Bond Bolton and the Mannis himself.

Again, logic attempts to trump reason. Given the circumstances, Stannis would be better off agreeing to allow Bolton to remain as Warden of the North in return for the pledge of his bannermen in the quest for the Throne.

Unfortunately, these two likely won’t be meeting for drinks in Mole’s Town, or sharing a round of golf at the Westeros Country Club. And something tells me that Bolton won’t be bowing to anyone by choice, especially when he is informed of the Tywin privy details. Furthermore, there’s no reason to suggest that Stannis would allow it anyway.

Other burning questions (and NOT seeking direct answers, so please refrain)

Who is this wise elder gent in the street?

Is Tom Cruise behind one of those golden masks?

And who are those guys? They no likey Dany.

What is that snowy village on the waterfront?

And why is Selyse crying in the snow? (Probably because someone is sacrificing her freaking daughter!!)

No sign of that recreated FrankenMountain deal, compliments of mad scientist Qyburn. But bring it on. No more loose ends… we’ll discuss loose ends in a future post, because they drive me batshit crazy.

Personal Note: No excuses. Sometimes the trials and limitations of life get in the way of hobby and passion for pastime. Cranking out a mere four chapters of the off-season Looking Forward series is damn near pitiful. And for that, a man owes an apology to the many readers who for some absurd reason, actually look forward to them.

However, the Oz always pays his debts, and I’ve got a special little segment lined up for next week as part of “Game Week” (it’s an unofficial title for everything site related next week… and has not been approved). So stay tuned.

Also, the In-season Looking Forwards will begin next Friday/Saturday as we prepare for the premiere followed by the Monday morning quarterback Unsullied recaps.

Until next week, tell a GoT friend about WotW, stay thirsty, and may there always be peace in your realm. –Oz