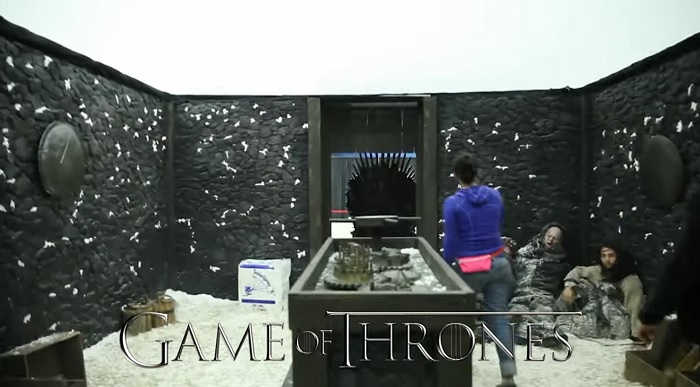 As previously announced, Game of Thrones will be well-represented at this month’s SXSW festival in Austin, Texas, with showrunners David Benioff and D.B. Weiss and stars Maisie Williams and Sophie Turner heading up a panel at the event. Today HBO announced an exciting addition to the festivities, confirming that once again an interactive fan experience is coming to SXSW.

This year, HBO presents fans with a unique experience: HBO: The Escape, challenging attendees to escape from three rooms themed to HBO shows including Silicon Valley, Veep and Game of Thrones.

How does it work? As HBO explains, participants in the Escape Room challenge must “solve a series of clues in each room to unlock the door to the following room and complete all three. In each room, teams will have the opportunity to complete a challenge, locate the door and escape to the next room. Once they’ve made their way through all three rooms, each team will have a chance to take their photo on the Iron Throne, to purchase merchandise from their favorite HBO shows from the online HBO Shop, and to be among the first to sample the brand new Game of Thrones wines, created in partnership between Vintage Wine Estates and HBO Global Licensing.”

SXSW attendees can reserve a slot by visiting HBOTheEscape.com! Apparently a limited number of slots are available each day, and will be confirmed on a first-come, first-served basis, so hurry on over and reserve your spot.

HBO has also confirmed that the Iron Throne room section of HBO: The Escape will be open to the general public during operating hours for fan photos.

And then of course, there’s the panel on Sunday, March 12th with the Game of Thrones showrunners, scheduled for 3:30-4:30pm local time. If you’re attending SXSW, head to the Austin Convention Center’s Ballroom D to see Benioff and Weiss chat with Turner and Williams about Game of Thrones.