Game of Thrones Season 6 Round-Up: Interviews, Pranks, and more! | Watchers on the Wall | A Game of Thrones Community for Breaking News, Casting, and Commentary 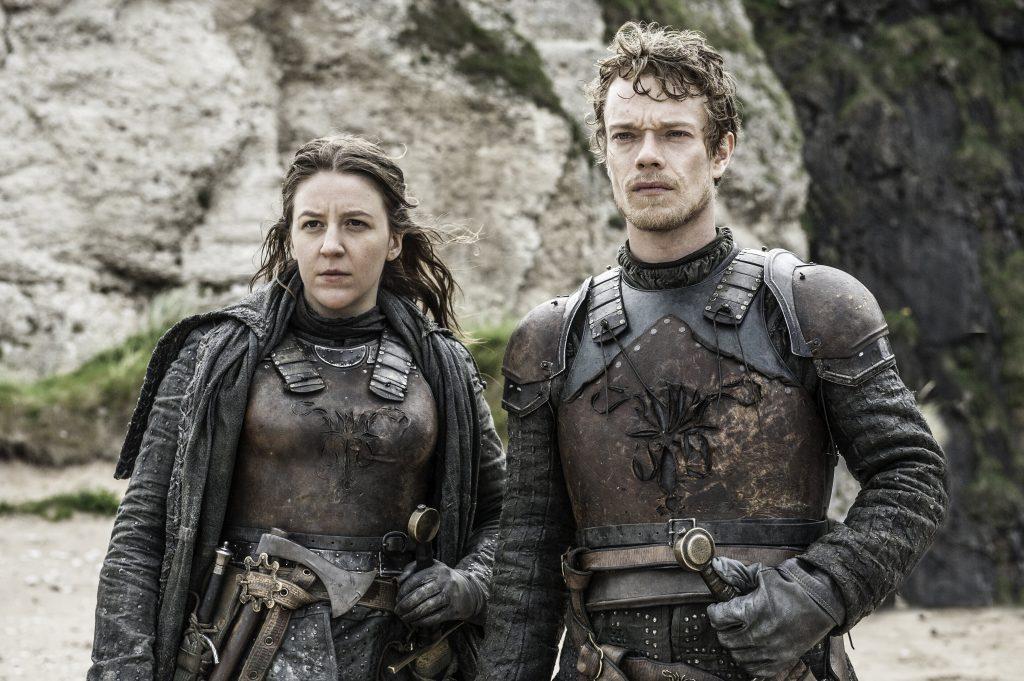 The hump of the week is over and we’re only three days away from the newest episode of Game of Thrones! We have some new interviews today with director Jack Bender where he talks Bran flashbacks at Vanity Fair and goes inside the big scenes of episodes five and six with Vulture. At Entertainment Weekly, producer D.B. Weiss pranks John Bradley and Kit Harington while one cast member returns the favor. The East European Comic Con hosted Gemma Whelan (Yara Greyjoy) and Daniel Portman (Podrick) recently who gave some tight-lipped hints for later this season. We also have a Twitter data recap that breaks down how the episodes of #GameofThrones have been discussed this season.

Making his outstanding Game of Thrones directorial debut with “The Door” (which he also discussed recently), Jack Bender returned this week with “Blood of My Blood” and is back to give us an inside look at directing these pivotal episodes.

Shooting Bran’s frantic rush of visions was an incredible spectacle of directing and editing. After breaking down the visions, we’re left questioning whether everything we saw was from the past or if some future sights were included as well. Jack Bender weighs in on the subject at Vanity Fair:

I have to confess, I don’t know the answer to that. I really don’t, because that is so much in the mythology and the specificity of what the show has been from the beginning and where it is going, and I don’t know those answers. I feel like you do, but I don’t know. I certainly don’t know how the puzzle fits together and where it goes, but like you, I can’t wait to see.

Head on over to Vanity Fair where he discusses Summer’s death, Hodor, and more! 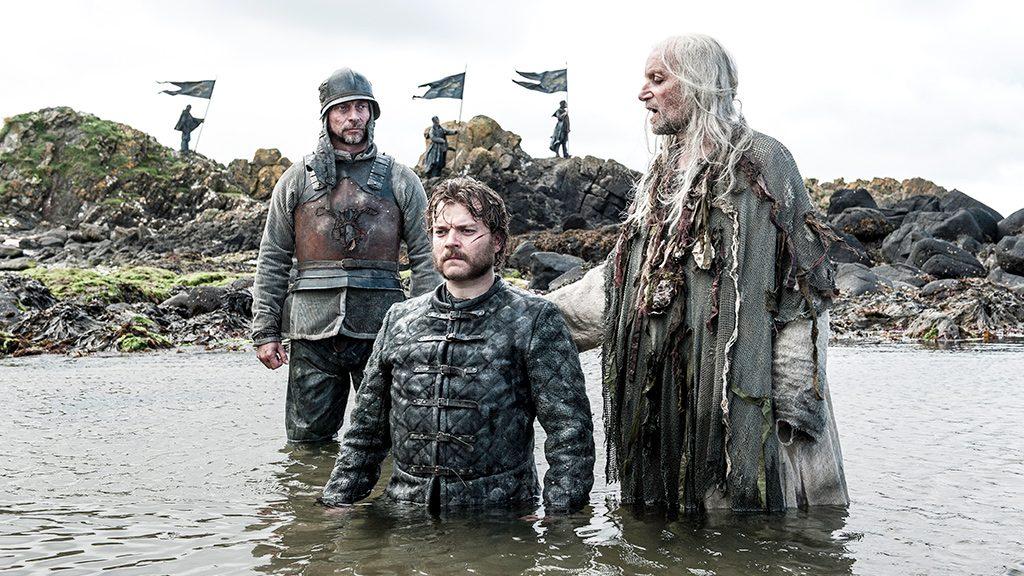 With Vulture, he goes inside the Kingsmoot and Dany’s speech on Drogon:

Usually when you see people drowning, they’re being held down against their will. Eventually, they can’t breathe anymore, and they inhale all that water. I had a thought that he would open his mouth voluntarily, and let the water in.

Bender reveals during the shoot for Dany’s speech atop Drogon, the horses wouldn’t settle down for rehearsal. One of the assistant directors suggested keeping them agitated would actually work better for the scene.

The Dothraki are more and more enthralled with what she is telling them, but the horses keep moving around. If you have her on a 747 of a dragon up on that hill, those horses would be fucking freaking out.

He adds the scene resonates “on an animalistic level.” 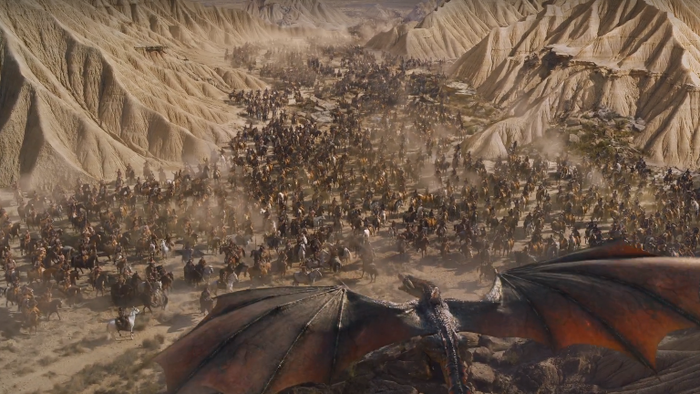 Historically, there are echoes of that kind of speech, seeing that kind of fervor for that kind of leader. Power is a seductive thing, and you have to decide whether to use it for good or bad. Every great leader has to know how to wield that sword, and she certainly has the charisma and the power to get them to back her. Where it goes from here, who knows!

Bender goes inside Bran’s visions, the play in Braavos, and the attack on the cave at Vulture.

Hannah has long had the sh–tiest costumes on Game of Thrones; she’s been in a burlap sack for five years. She was so happy that she finally gets into a real piece of clothing this year. So Kit and Hannah thought it would be funny to play a joke on John and let him think he’s going to get a new costume too. 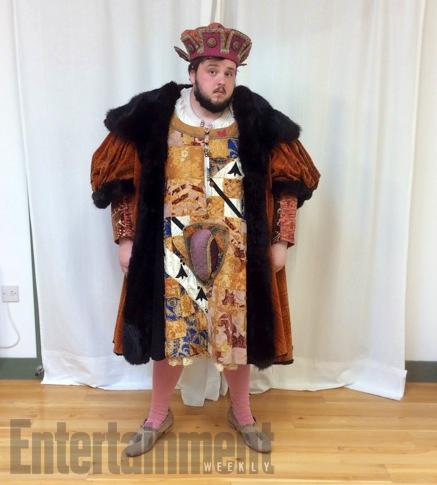 As you can see from his face, Bradley was thrilled with his new costume.

I looked so bad and ridiculous, it was unbelievable. There was a huge vulgar codpiece – though flattering, to be sure. The reason I bought it is because we’d never seen Sam at home before, and [his parents think] he’s an idiot. [Maybe] Sam dressed like an idiot before he came to Castle Black.

In hair-related pranks, Season 1 Episode 8 had a very special scene for Kit Harington (Jon) who was facing off with his first ever wight. In Harington’s joke draft, Jon is horrifyingly disfigured and burned when he saves Commander Mormont. The fire even takes *gasps* his hair.

The draft ends with “Jon smiles, his teeth shining brightly in his destroyed face. Mormont, sickened, has to look away.”

Nikolaj Coster-Waldau (Jaime) turned the prankster tables over on his producers when he sent a shot of himself with a shaven head after getting a script with Jaime’s haircut.

Nikolaj wrote this Angry Actor Email about how he was very upset that we were changing his hairstyle. He said he felt the need to own his hair because his hair was part of his character, and he was going to take it upon himself to get his own haircut that he felt best reflected Jaime Lannister as he saw him. He said he hoped we’d understand and he’d send us a picture shortly.

It was no trim either, we’re talking full on “military buzzcut” according to D.B. Weiss. It went so far as to having HBO’s lawyers contacting Coster-Waldau’s lawyers for fear they would “have to get a Jaime Lannister wig at last minute at tremendous expense.” As the hair-raising catastrophe worsened, Coster-Waldau emailed back saying the photo was from five years ago and he hadn’t really cut it.

At the East European Comic Con last weekend, Gemma Whelan (Yara) and Daniel Portman (Podrick) answered some fan questions and were exceptionally evasive when it came to one subject.

A Greyjoy/Targaryen meet-up has been heavily anticipated since the Kingsmoot. When asked if the two queens would get along if they ever did meet, Whelan replied:

Well that’s as good a confirmation as Kit saying Jon’s really dead! Check out the full panel below!

The Dany exchange takes place at 27:23. They also very pointedly refuse to address the R+L=J theory about the 48 minute mark.

While Facebook, Tumblr, and Reddit are all viable forms of Game of Thrones discussion, the place to be during the episode is Twitter. Live-Tweeting has become increasingly popular and the biggest show in the world is certainly no exception. A new Twitter breakdown shows how fans are discussing Season 6 so far: 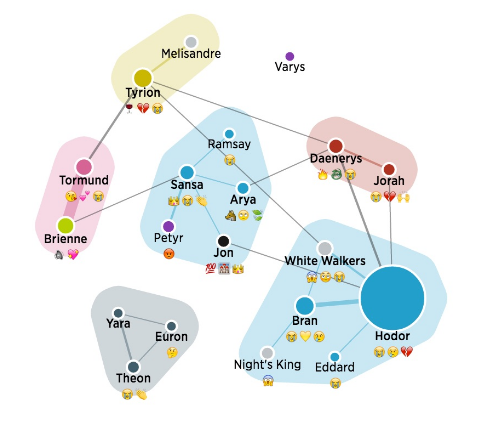 From Season 6 Episode 5 “The Door”

No surprise Hodor got the most love for that episode. It’s interesting to see frequency alongside emotional reactions, especially in the form of emojis. 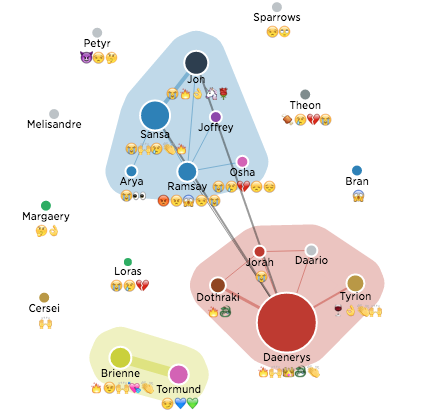 Season 6 Episode 4 “Book of the Stranger”

Nice to see some Dany love this episode as it was a big one for her. Hearts broke for Osha, Loras, and Theon as the “Tormienne” ship sails strong!

For more on the data collection and breakdown used to create these, head on over to Twitter!

What are your thoughts on all this? Let us know below!