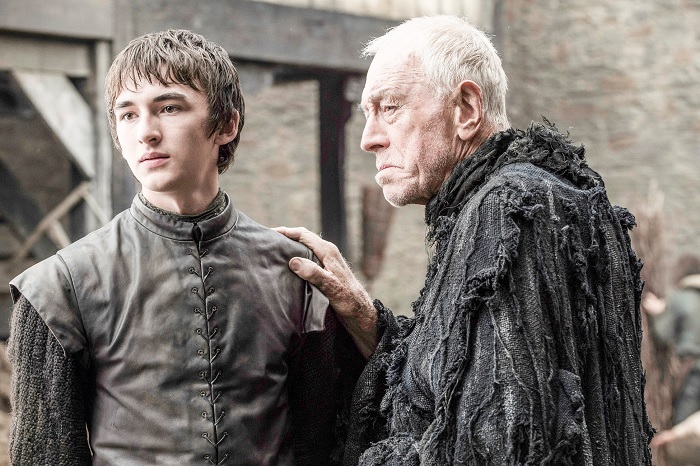 Just nine days remain until the season premiere of Game of Thrones! Today in our walk down Memory Lane, we take a look at an episode packed with eagerly anticipated moments. The debut of Euron Greyjoy, a heartbreaking return to Winterfell for Bran, and the resurrection of Jon Snow all feature in “Home.” Taking on the episode is another returning presence in the Lane, having taken part in last year’s GoT50. Please welcome back SirSquinty! – Sue the Fury

It’s wonderfully fitting that I write this from an airplane, on my way “Home” after an incredible stay at the first annual Con of Thrones. How even more fitting that this is the episode in which we were first introduced to young Hodor, played by Sam Coleman, a lovely chap of whom I had the pleasure of getting to know at the con. I even ran into him at the food court at the airport before we both headed our separate ways Home (the caps will remain for this memory lane’s duration, as you’ll soon see)!

This episode will of course be forever remembered for its closing shot where our beloved hero Jon Snow opens his eyes and breathes air once again. However, as far as season 6 episodes go, it’s actually one of the more slowly paced ones. With this in mind, I thought I’d play a little game with this Memory Lane. How many moments in this episode can I tie into the aptly titled “Home?” Before you go on reading, take a guess as to how many I’ll find, and see how well you do at the end! Fair warning – some are stretches… 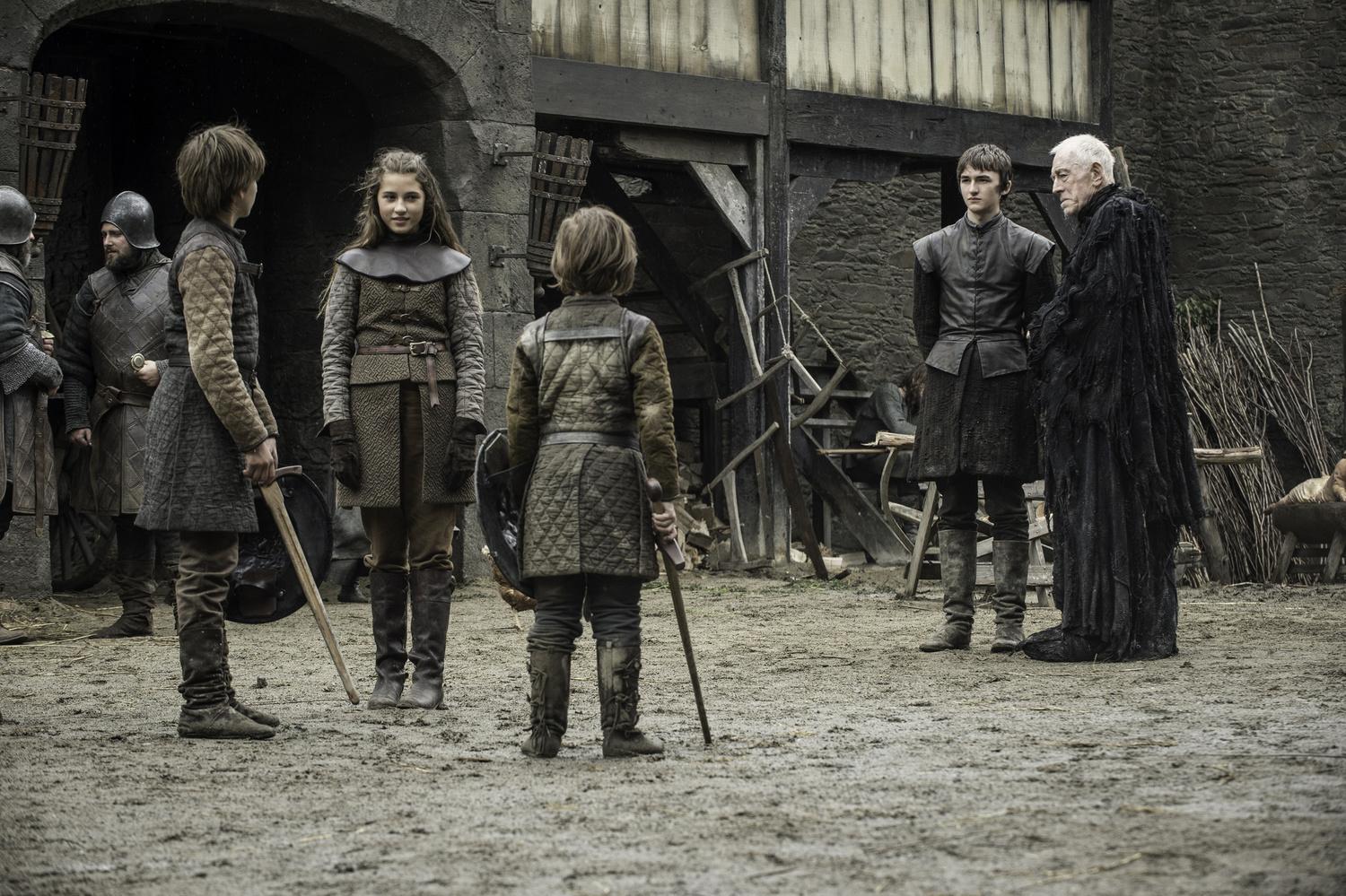 The episode marks the return of the Bran Stark storyline after an entire season on the backburner. We revisit Bran, who is now deeply entrenched in his training to become tree. Most exciting is of course learning of his powers to visit the past, which he does with the help of the Three-Eyed Raven (Max Von Sydow). For the first time we see Bran return to Winterfell, his family Home [one!]. It is here that we see young Ned, Benjen, Lyanna, and even little Wylis Hodor, who could then speak – WHAT?! Meera also expresses what I’ll classify as Homesickness [two!], due to her brother Jojen’s death, and the general meandering of #TeamBran. One major revelation we learn in this episode is that Bran cannot dawdle too long in the past or else bad things could happen… 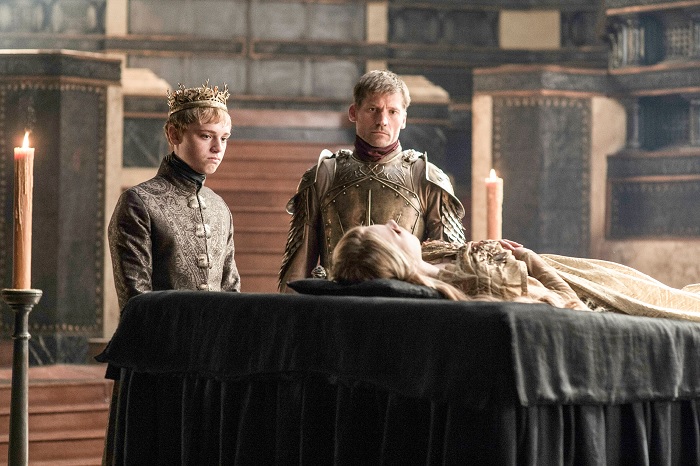 Jaime returns Home [three!] to King’s Landing after a wayward (and narratively questionable) trip to Dorne in season 5. As you’ll remember, Myrcella was snatched from his fingertips just as he had begun to show signs of fatherhood. In an attempt to make up for what he lost with Joffrey and Myrcella, Jaime tries to impart some fatherly advice to Tommen. However, the High Sparrow and his crew creep up on them and surround them. “The gods won’t mind. They spill more blood than the rest of us combined,” quips Jaime when he believes he can intimidate the High Sparrow into submission. Still, he is no longer a match physically for the Sparrows who have taken up residence in and around the Red Keep. One might go as far to say as they have made themselves…feel…at Home [four?] Meanwhile, Cersei adjusts to her new imprisonment that she has come to call Home [five!]. That can’t be fun for her.

Cutting over to the Daenerys storyline minus a Dragon Queen or two, Tyrion and #TeamDany engage over some dinner and drinks. Not one to sit idly by while enemies could storm the gates at any moment, Tyrion resolves himself to take action and decides to unchain Rhaegal and Viserion. As he does so, he recites his instantly famous monologue which includes the memorable line: “I’m here to help; don’t eat the help.” In doing so, Tyrion regales the dragons with a tale of when he was a boy back Home [six] and dreamed of one day meeting a dragon. Well, Tyrion – today’s your day.

Continuing on our tour through Essos, we come to Arya No One in her state of discomfort. The newly blind nobody is being abused by The Waif in the streets, and acquiring many new bruises and cuts along the way. Eventually, Jaqen H’ghar approaches her and continues to test her, inquiring incessantly into what her name is. When she refuses to be anyone other than No One, Jaqen brings her with him, returning her to the House of Black and White, a place she has learned to call Home [seven]. 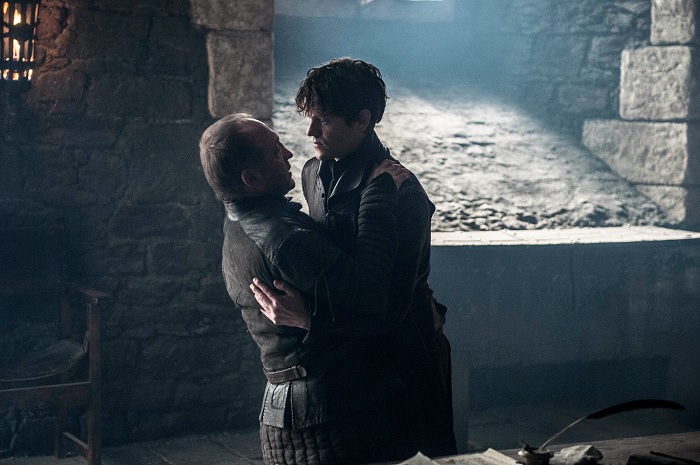 Back to Westeros in a flash we go, this time landing at Winterfell, where the Boltons have taken up residence. With the news that Lady Walda has borne a son, and feeling his inheritance threatened, Ramsay impulsively kills Papa Roose Bolton, against his better judgment. Ramsay – you shouldn’t a done that, buddy! Your daddio was the only thing keeping you tethered to sanity. Of course, Ramsay doesn’t take my advice and proceeds to feed his stepmother and new baby brother to his hounds, thus foreshadowing Sansa’s poetic justice later this season. Why does he do this? Someone had threatened Winterfell, Ramsay’s new Home [eight!] – what was the poor bastard Bolton to do?!

Naturally, following Ramsay, it only makes sense to catch up with Reek Theon and Lady Sansa Bolton Lannister Stark. Safely away from Ramsay’s hounds, the party sets course for The Wall so that Sansa can reunite safely with Jon, her last known vestige of Home [nine]. Theon, however can’t bring himself to face Jon after what he did to Winterfell and the farmer’s boys, and decides that he’ll be heading Home [ten!] to Pyke to reclaim whatever dignity he has left. It’s a sad parting but helps to set the upcoming Greyjoy storyline in motion. 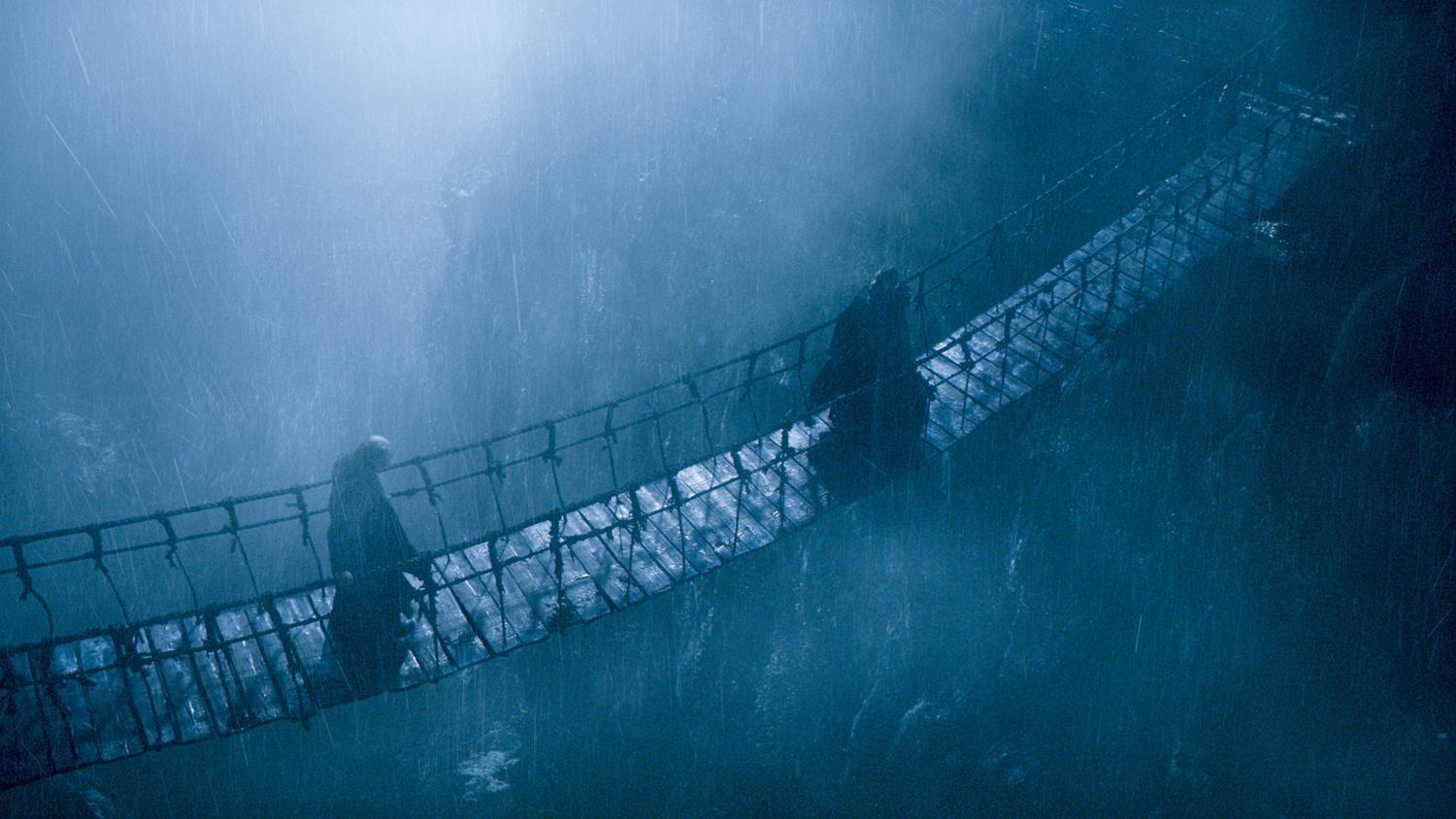 Yara pushes her father to exercise caution in his next battle plans, but Balon quickly shuts her down. He storms off stormily into the storm and encounters his brother Euron, Home [eleven!] at last after many years at sea. Balon and The Crow’s Eye spar for a moment, before Balon has an…accident. Yara swears vengeance on whomever killed her father, and lays her first claim to the Seastone Chair. Will she be the first woman to rule the Iron Islands? 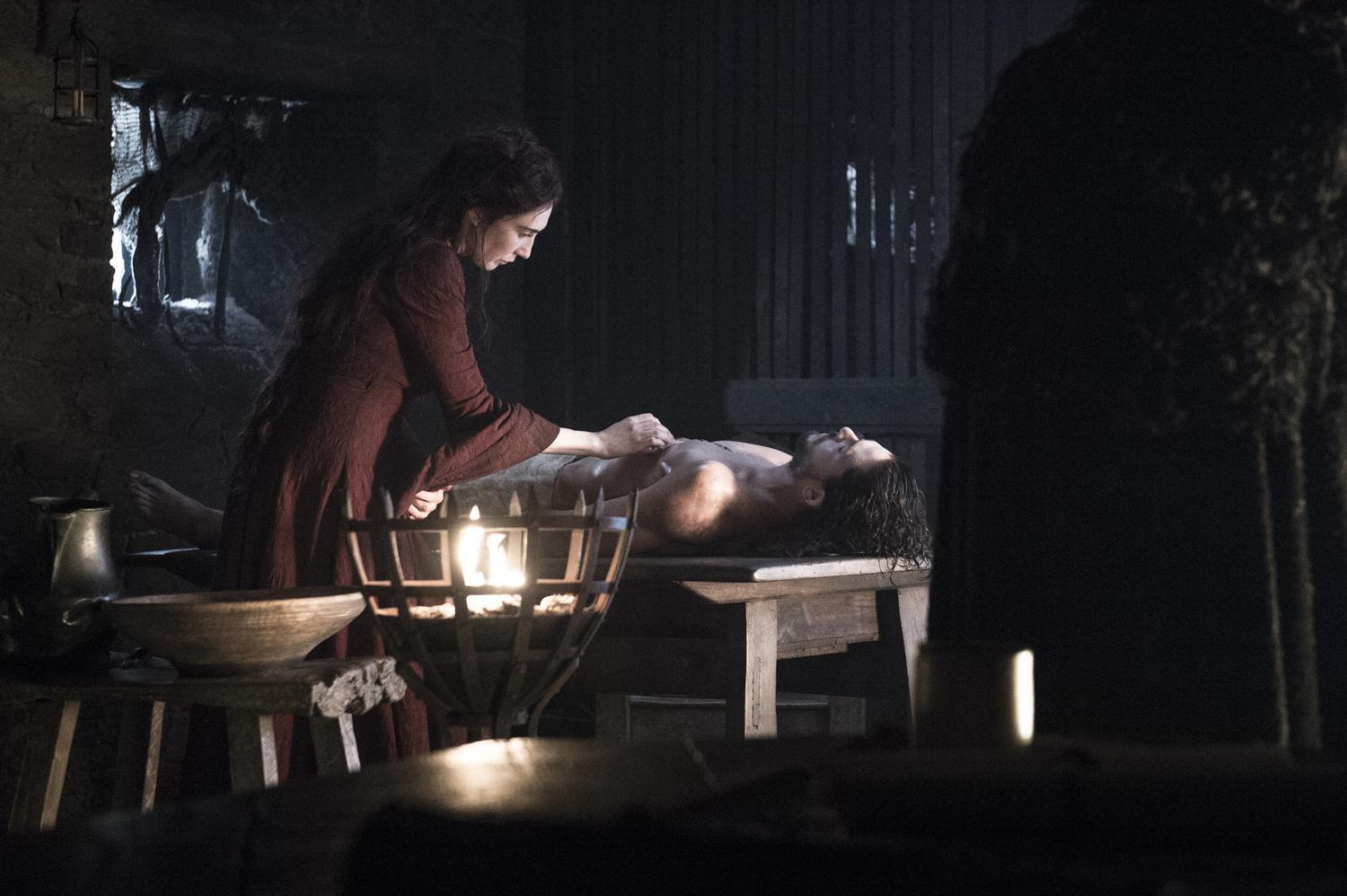 The episode finally closes on the storyline that everyone was begging for: back at The Wall, with a dead Lord Commander, Davos makes an 11 o’clock plea to Melisandre to conjure up some magic and try to revive Jon from the dead. Flashback to May 2016, when everyone sat on their couches collectively biting their nails as Jon lay there silently, Melisandre casting a spell on him, with the Snow loyalists standing around watching. After the supposed failed revival attempt, and the party leaves, the camera lingers on Jon and pans over to Ghost.

Just as seems like all hope is lost….HE’S ALIVE!!! Jon breathes like he ain’t never breathed before and the episode cuts to intense music, commemorating this amazing moment. I know hindsight is 20/20 and you “knew all along that Jon was coming back,” but this moment was still really great, and given all the pre-season hype of #KitHaringtonHairWatch, I think this was as strong as it could have been, all things considered. Welcome Home, Jon [twelve!]!

All in all, I found 12 individual instances of a story point referring to “Home.” With which ones do you agree? With which do you disagree? Did you find any that I did not? What are your thoughts upon revisiting “Home”?

“I’ve never been much of a fighter…Apologies for what you’re about to see.”
– Davos, on his preparation to combat Alliser Thorne’s men head on, before being rescued by the arrival of Edd and Wun Wun

“Next time I have an idea like that, punch me in the face.”
– Tyrion, to Varys reflecting on his terrifying plan to (successfully) unchain the dragons without any fireproof armor, or even nearby water

Other Highlights from the Episode:
• The Mountain had some good Mountain-y action, when he one-shot rammed a drunkard’s head into a brick wall, killing him instantly. Then again, this man was boasting all sorts of rumors about the Mountain’s beloved Cersei, so, one Mr. Undead Clegane was really just showing some loyalty is all.
• Turns out this was an episode for one-hit kills: Wun Wun doesn’t take too kindly to a Night’s Watchman shooting him in the back, so he grabs the marksman by the legs from the parapet and swings him like a baseball bat into the wall. His bloody remains splatter everywhere; he is very, very dead. Score 2 for 2 for our very large characters. 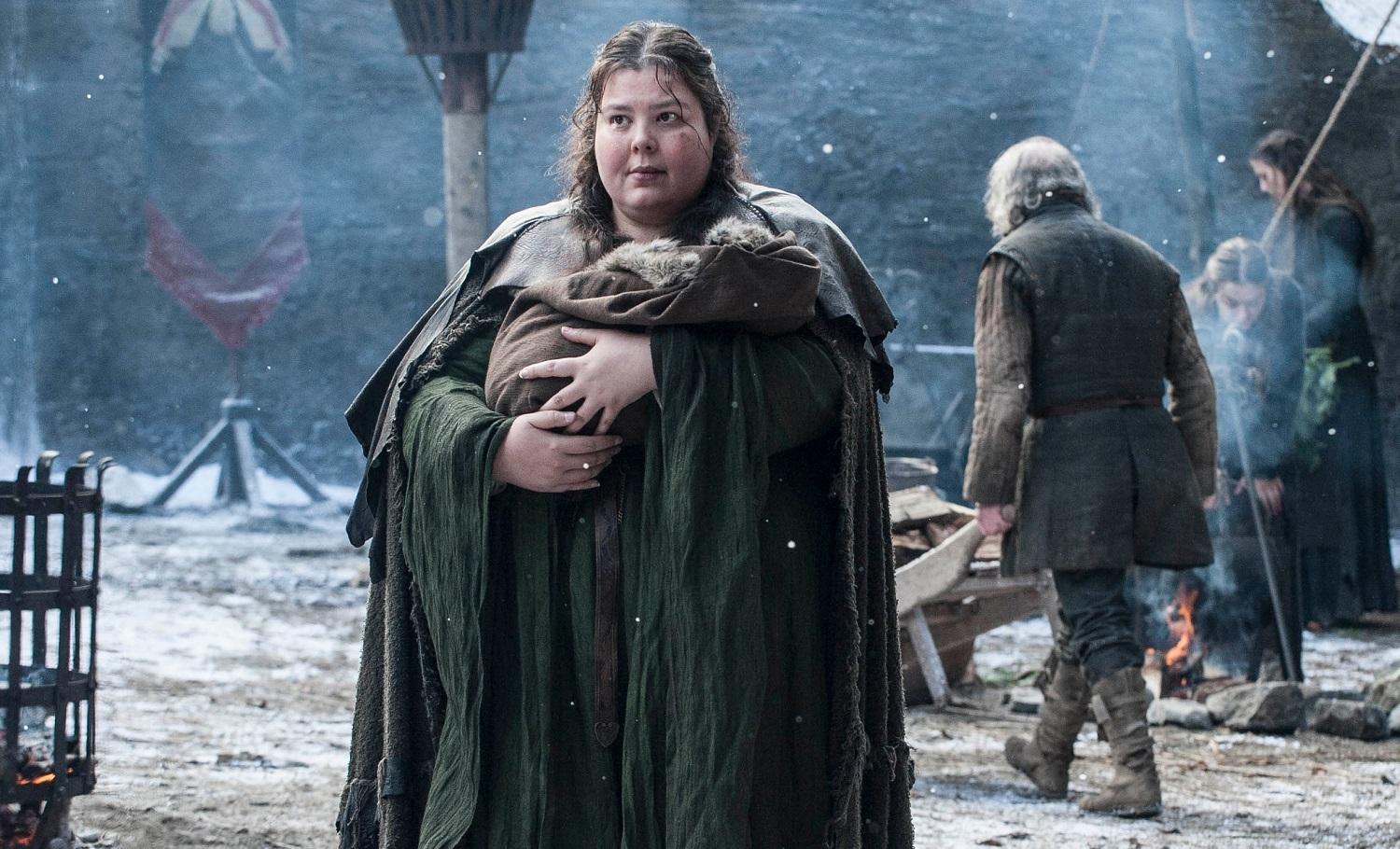 BeautifulDeath for “Home” : The Death of Roose Bolton 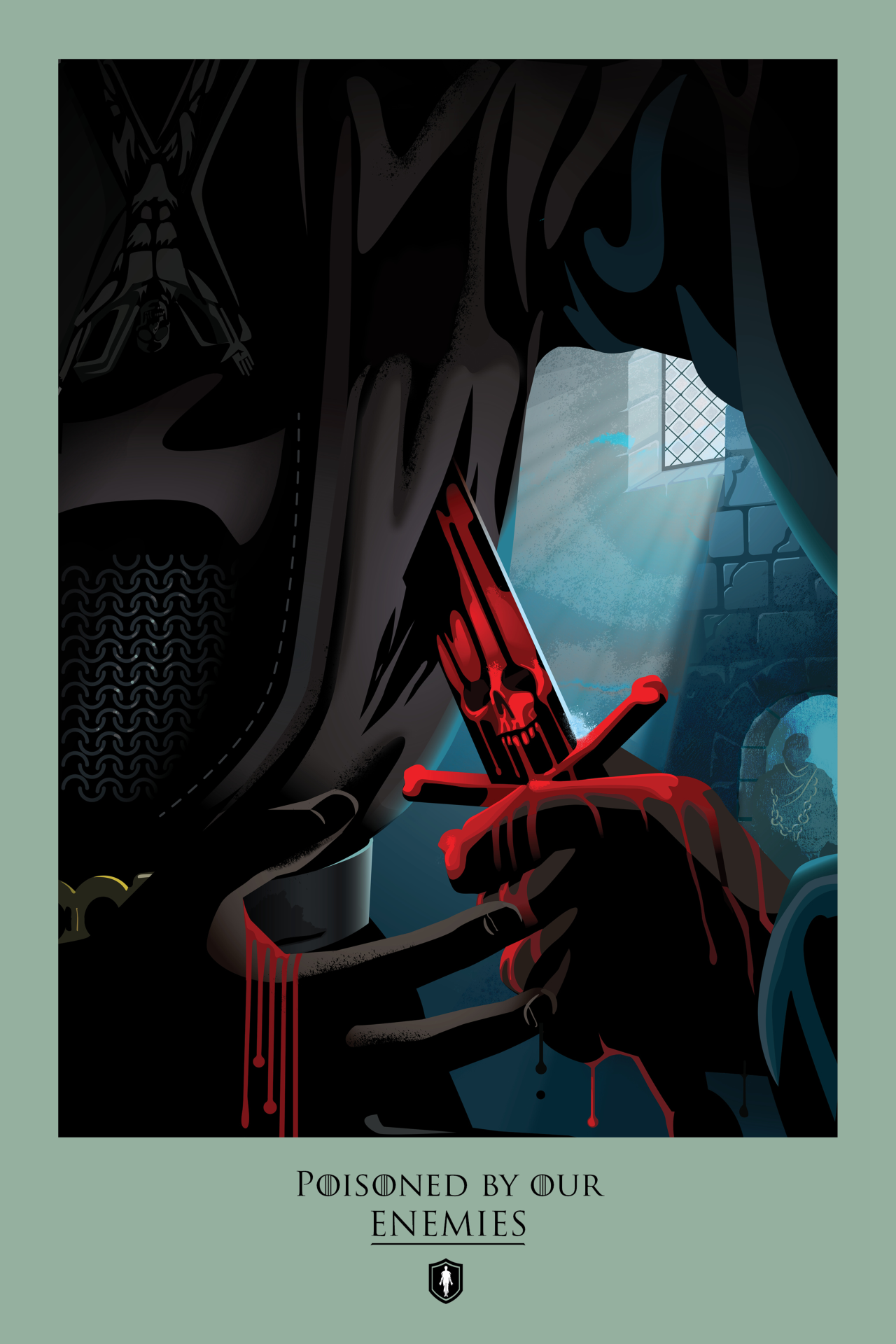