Game of Thrones casting in Malpartida brings fresh news! | Watchers on the Wall | A Game of Thrones Community for Breaking News, Casting, and Commentary 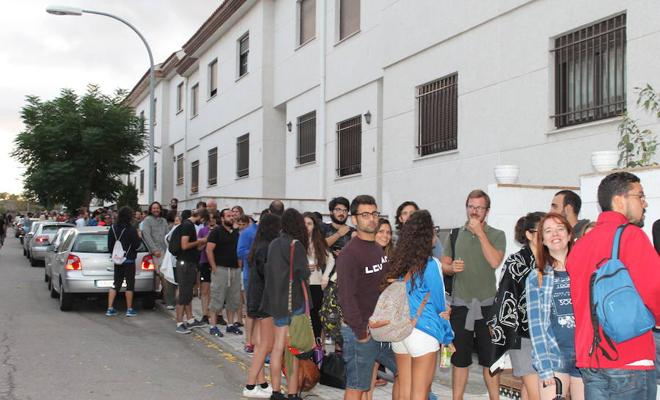 The line of extras in Malpartida. Photo: EFE/L.S.

Extras casting in Spain kicked off yesterday in Malpartida, Cáceres, with as many as 8,000 people showing up for the coveted spots in Game of Thrones season 7. Hoy reports that some applicants even spent the night waiting in line with friends, with some people lined up since mid-afternoon the day before.

ModExpor International stated in their initial casting call that only 2400 men and 600 women will make the cut in the first day and receive an invitation for further screening. Today, ModExpor is continuing their screenings for men, according to their  Facebook. Ultimately, only 450 people from the Cáceres region will have the opportunity to become extras in the new season.

Los Siete Reinos has details on the process with a few season 7 spoilers, as friends of the site personally went through the process in hopes of becoming extras.

As they explain, the candidates are examined to see if they pass the basic requirements asked for in the casting notice we saw: no visible tattoos, no modern hairstyles, etc. Some of the extras were asked if they’d be willing to shave their heads as well as their beard. After this preliminary stage, the would-be extras are measured and fill out the paperwork, hoping they’ll be chosen for the final round.

Their report has solidified some of our suspicions, with their newest spoilers concerning Spain filming. The filming in Los Barruecos of Malpartida will be a battle in which the Unsullied take part. They’ve also learned that HBO’s people have been searching for a large number of horses to use in these action scenes in Malpartida. Horses points toward the Dothraki, though it is possible at this point that the horses will be used in Cáceres city, as well.

If the reports are all correct, we could be seeing a huge battle with the Unsullied and the Dothraki taking on an enemy. I’m wondering if this battle is connected to the one we reported on September 8th, being filmed on studio sets last week. If they’re separate, well we’re in for another action-packed season!