There’s only a few weeks left of Game of Thrones filming! With the teaser poster revving up everyone’s engines, we’re readier than ever for season 6.

It seems there was filming for Brother Lancel this week. Eugene Simon shared this image on Instagram yesterday, of his very dirty post-filming feet.

@Eugene_Simon: Ignoring my very weird feet! This is a typical evening after filming #GoT! Like when I was kid really… #natureboy

Filming continues over in Moneyglass, Northern Ireland, this week as well, based on local sightings. The town that plays home to the Winterfell set saw more action late at night yesterday.

Speaking of the new season 6 promo poster, Game of Thrones shared this custom Pop! toy take on the teaser art:

Here’s a new casting call that could be something – or could be nothing and not related to Game of Thrones at all. At this point, we’re just speculating in a big way. We’re roaming into spoiler territory with our speculation.

*Everything below this point carries a spoiler warning!*

This notice was posted yesterday by Extras NI, who handle all the extras casting for Game of Thrones in Northern Ireland. According to the latest posting, Extras NI is searching for a newborn baby boy with brown eyes. The filming date for the child is Thursday, December 17th. 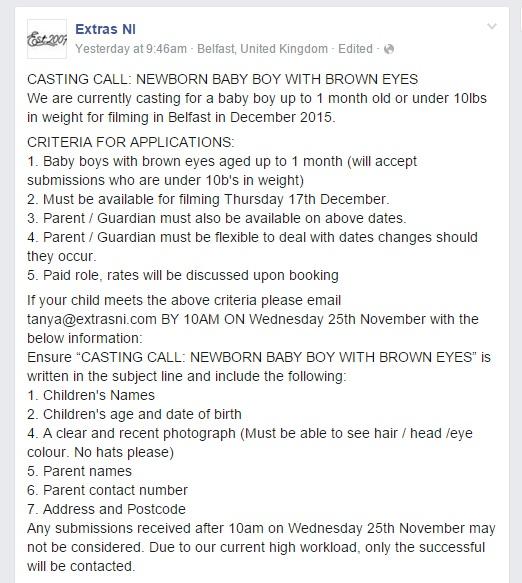 Game of Thrones is set to be filming during that same week- we saw casting notices for two northern noblemen a couple weeks ago, with a filming date of December 16th. So the northern storyline at the very least will still be shooting then.

We’re wondering if this  baby might be needed for Game of Thrones, since whether this is for television or film isn’t mentioned in the write-up, and more details often are provided in these Extras NI notices. Also the specificity of brown eyes makes us curious. We already know that we’ll be seeing a couple flashbacks in season 6. Those scenes have already been filmed but there’s always the possibility that more footage was needed. And there is a major character with brown eyes whose birth is likely a significant plot point.

Another filming tidbit from our sources: We’ve heard that there is shooting in the throne room this week! The characters involved will be Cersei, Jaime and here’s where it gets interesting- a new Hand of the King. Our source didn’t know who this new Hand is.

And finally, Los Siete Reinos brings us new morsels of info in their summary of the man of the hour- of the month really- Jon Snow! The details also involve Melisandre and more but it all comes back to Jon and his death.

L7R writes that Carice van Houten had little filming time this year, and her scenes were all wrapped up in secrecy. It’s likely that Melisandre was there for Jon’s resurrection and L7R’s sources confirm that Jon’s direwolf Ghost was present as well. (Well, his special effects ball-on-the-stick was.) Reportedly, the Ghost-stick has been used a lot more for season 6 than previous years, which points toward Ghost having a big role next season.

Los Siete Reinos has also heard that the scene with Ned and Lyanna has been filmed, which is in line with the info we heard about the potential Lyanna casting call (“Young Stunner”) pointing toward an August filming date.

Between the teaser poster, and the steady flow of Jon Snow spoilers, it looks like season 6 is going to be all about a man we’re supposed to believe is gone for good.