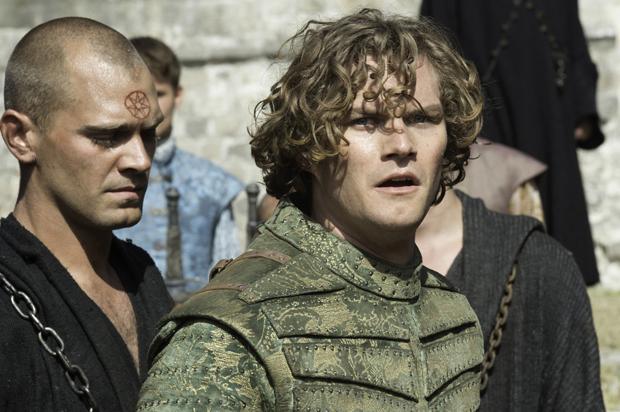 In a new interview with Express Online, Finn Jones (Loras Tyrell) teases the upcoming season of Game of Thrones calling it ‘very shocking’. Additionally, there is new merchandise a plenty making its way before Season 6 hits as fans are more excited than ever to see the series continue. We’re still excited over the new items recently announced but naturally are hungry for more.

We last saw Loras being imprisoned by the religious fanatic cult The Sparrows leaving us worried about his fate. A new interview with Finn Jones leaves us a more eager for Season 6 and maybe even more worried for our Knight of the Flowers.

I was a little bit nervous when I got the scripts through but I’ve started filming now and so the nerves aren’t there anymore. So I know what’s happening, a lot of good stuff to do this year. There’s a transformation in Loras’ state and character and it’s fun to be able to go a little bit deeper and darker in the character. I’ve really enjoyed being able to go to those places.

He also adds that since it’s Game of Thrones, it’s bound to be shocking but he says this season in particular is especially so.

The end of season six in particular is very shocking.

As if we already couldn’t wait!

First we had a Game of Thrones-themed Monopoly, then the newly announced Risk and now a pinball machine is on its way from the makers at Stern Pinball.

The Wall Street Journal has the teaser from HBO and we’re eager for more details!

If you’re still craving some Thrones merchandise and are looking to cool down this summer, why not venture to Spain for one of these bad boys?

That’s right, in the spirit of recent filming Girona has Jaime Lannister popsicles complete with a blood red filling:

Finally, a fortunate Game of Thrones fan journeyed through the filming locations of the series and recounts her adventure featuring a special guest!

The adventurer encountered Wildlings, Direwolves, and bastards (oh, my!) on her trip and lucky for us kept a digital diary of the entire endeavor.

From Iceland to Spain, to Morocco and Croatia, to Malta and back to Northern Ireland, this trip has it all.

Even an evening with Kit Harington! Tessa had the pleasure of meeting Kit, Alfie Allen (Theon Greyjoy) and Ben Crompton (Eddison Tollett) in Belfast early this August. She couldn’t photograph Kit’s face….but she did get a shot of his shoes in an amusing photo and story. Visit Part 2 of her articles to check it out!

What do you think this means for the future of the Tyrells? Are you anticipating the newest Thrones styled game? Let us know your thoughts below!