The shoot in Cáceres City has been a bit of a mystery. The look of the old town gave us a good idea of what the shoot may entail, and yesterday’s report reinforced our notions. Today, we finally have details on the scenes to be filmed there in a few weeks’ time.

Los Siete Reinos learned the women extras who were cast will shoot in the city. Women extras are a rare sight this year —Every single Spanish location required only men, as they were all soldiers of some kind or another. In the world of Westeros, women being present means the smallfolk of the Seven Kingdoms will walk the streets of Cáceres. And they will be accompanied by Lannister guards! However, not even these extras have received military training, so there will be no fighting. Alongside a lack of Unsullied, these clues point to our previous suspicions being correct: Cáceres is King’s Landing.

Below the cut, we have L7R‘s clearer version of a certain fiery attack, and an exclusive picture of ours from inside the Wolf Hill Quarry set, revealing a primary character’s involvement in one of the season’s biggest climactic sequences. Spoilers ahead!

L7R shared this cleaner version of the incendiary attack shot in Malpartida:

If my ears don’t fail me, after the explosion the man rolling on the floor to put out the fire (or someone off-screen) shouts something at Daenerys, calling her by her Dothraki title of “khaleesi”, which Jorah alone does in the Common Tongue. Then, if I’m not mistaken, the man asks “what sort of witchcraft is this.” We are not aware of Jorah being involved in this sequence, or even whether this attack is dragonfire or something else. Whatever the case may be, the filming at Los Barruecos in Malpartida continues delivering, and this only adds fuel to the fire (sorry.) If the almost one-month long shoot wasn’t a dead giveaway, the number and sheer variety of scenes that make up this sequence make clear this battle is one of season seven’s largest setpieces.

Meanwhile, in Northern Ireland, Game of Thrones is already filming at Wolf Hill Quarry. Previously our sources told us filming would take place starting this week —And for the next three weeks. Yesterday’s drone footage corroborated they were already hard at work in the large snowy set, which has been the subject of much speculation.

We believed this ice lake set to be the focal point of a major action sequence for next season, involving Jon Snow and many other characters. Today a source shared the following photo, confirming our suspicions: That’s Kit Harington on Wolf Hill. 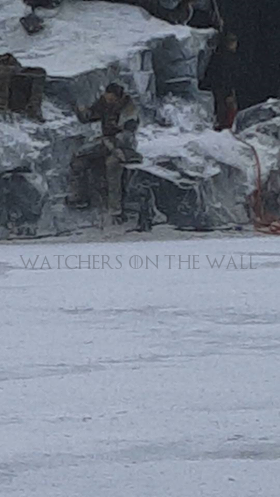 As you may guess, the photograph was taken furtively, so the quality leaves something to be desired, but our sources saw Harington on the scene and we’re confident it’s him.