The Basque wonder of Gaztelugatxe has been home to Game of Thrones filming only for a day, but it was quite a fruitful day —Not only for the production but also for the local press, who were there to give us our first look at what many of our main characters will be doing this coming season. The day’s work did not end there, however: Later in the day, Emilia Clarke made her fist public appearance on set this year. At long last, we get to see the Dragon Queen, Daenerys Targaryen, in her new conquering regalia.

According to Basque newspaper Deia, Kit Harington and Liam Cunningham spent the whole morning filming what appears to be the single scene we already reported on: King Jon and Ser Davos going down the stairway of Gaztelugatxe, perhaps being escorted by Missandei. Later on, however, another scene was being filmed, and this one involved the whole Targaryen Crew: Queen Daenerys Targaryen, bearer of many titles (Emilia Clarke); Tyrion Lannister, Hand of the Queen (Peter Dinklage); Missandei, adviser and interpreter (Nathalie Emmanuel); Grey Worm, commander of the Unsullied (Jacob Anderson), and Varys, Master of Whisperers (Conleth Hill). Take a look:

This is the first time we get to see Varys and Grey Worm this year, and you may notice the Unsullied Commander, as well as all of his troops, have adapted to the colder weather of Westeros. Just as the Dothraki are wearing furs for the first time, the Unsullied now cover their previously unprotected arms. Let us be honest, however: Except for those who —for some reason— watch the show for realistic military logistics, most of us are probably more interested in what the Dragon Queen is wearing. Apparently, Daenerys has opted for a more martial-looking outfit than usual, very much like Missandei, though this one seems to be brown. Sadly, those of us who are hoping she embraces her Targaryenness fully and dresses all in black and red will have to wait.

Now, why are we discussing the dress and not the contents of what was actually filmed? Because, as of yet, we have no idea. This may be their arrival to Dragonstone, or another scene entirely. What is now undeniable is that Jon Snow and Daenerys Targaryen will be in the same location in season seven, even though we have not seen them sharing a scene yet. Please share your thoughts on the scene in the comments!

UPDATED: Filming in Gaztelugatxe continued this morning and, yet again, EL CORREO is our lifeline to the otherwise well-guarded production. In this scene, the Targaryen and Northern teams walk together up the stairs, though Daenerys is absent. 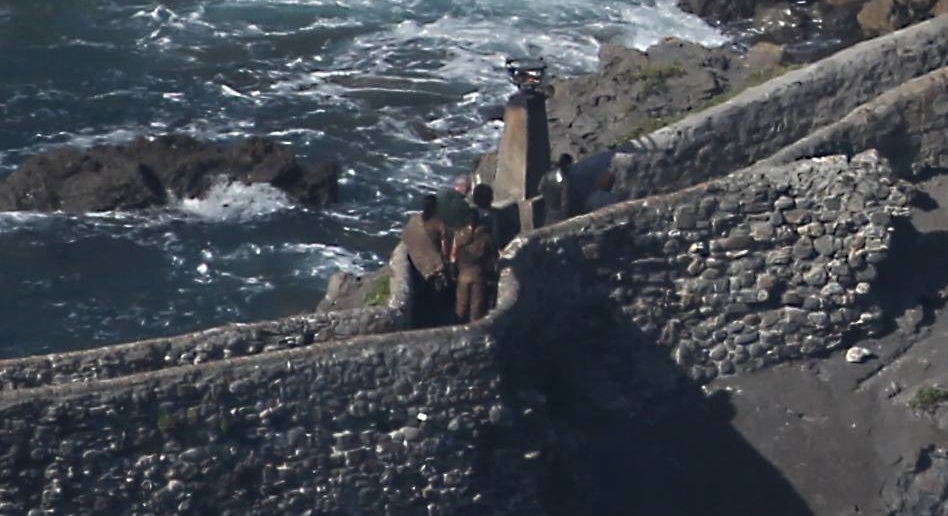 EITB also filmed some of the shooting/Emilia’s arrival from a distance:

In context, it seems likely the two monarchs would meet inside Dragonstone, which would be filmed in Northern Ireland’s Titanic Studios. That said, it is still exciting to witness characters as disparate as Davos and Missandei sharing a scene and perhaps a conversation. Even better is the reunion of Jon and Tyrion, who have not seen each other since the latter pissed off the edge of the Wall and left Castle Black only to be soon captured by Catelyn. Good times! They must have so much to catch up on… If they have any time for chit-chat, that is. Season seven promises to be a packed one!