New characters are coming to Game of Thrones! We haven’t heard much of this kind of thing for season eight, with few exceptions, but that’s not surprising: a show with a cast as expansive as Game of Thrones doesn’t need many tertiary characters by its last season. Nevertheless, there are a few, and we’ll tell you all about them below the cut! Also: the King’s Landing set develops further, an iconic location returns in a big way, and we delve into the Jon and Dany filming photo that’s going around — but is it real?

Our sources revealed Game of Thrones is currently looking to fill two roles in their last season — though, interestingly, they’re going to fill them with three actors.

First of all, there is a young mother, aged 25 to 30, described as a poor mother in a survival situation. They’re looking for a naturalistic style, and improvisation skills.

Then there’s the mother’s child, who will be played by identical twin girls, aged 5 to 8. This is a pretty common solution to scheduling problems with children, who are only allowed to work a few hours a day thanks to child labor laws. Using twins allows them to double the daily workload. Going by the “naturalistic acting style,” “characterful faces,” and “scrappy” demeanor they’re looking for, this family is likely Northern, or perhaps they are King’s Landing commoners — no accent is specified. The character will only appear in one episode, in a number of scenes. Whoever the lucky twins are will be shooting on May 4 and 9 as well as between June 19 and 26, all in Northern Ireland.

Take note of the dates: the twins are filming up to the 26th of June, which fits within Lena Headey’s claim that the production will wrap in late June. It fits, but it doesn’t confirm it — or refute it, for that matter. If, in the future, we hear of any casting call extending beyond June, the initial August wrap date may turn out to be correct after all. 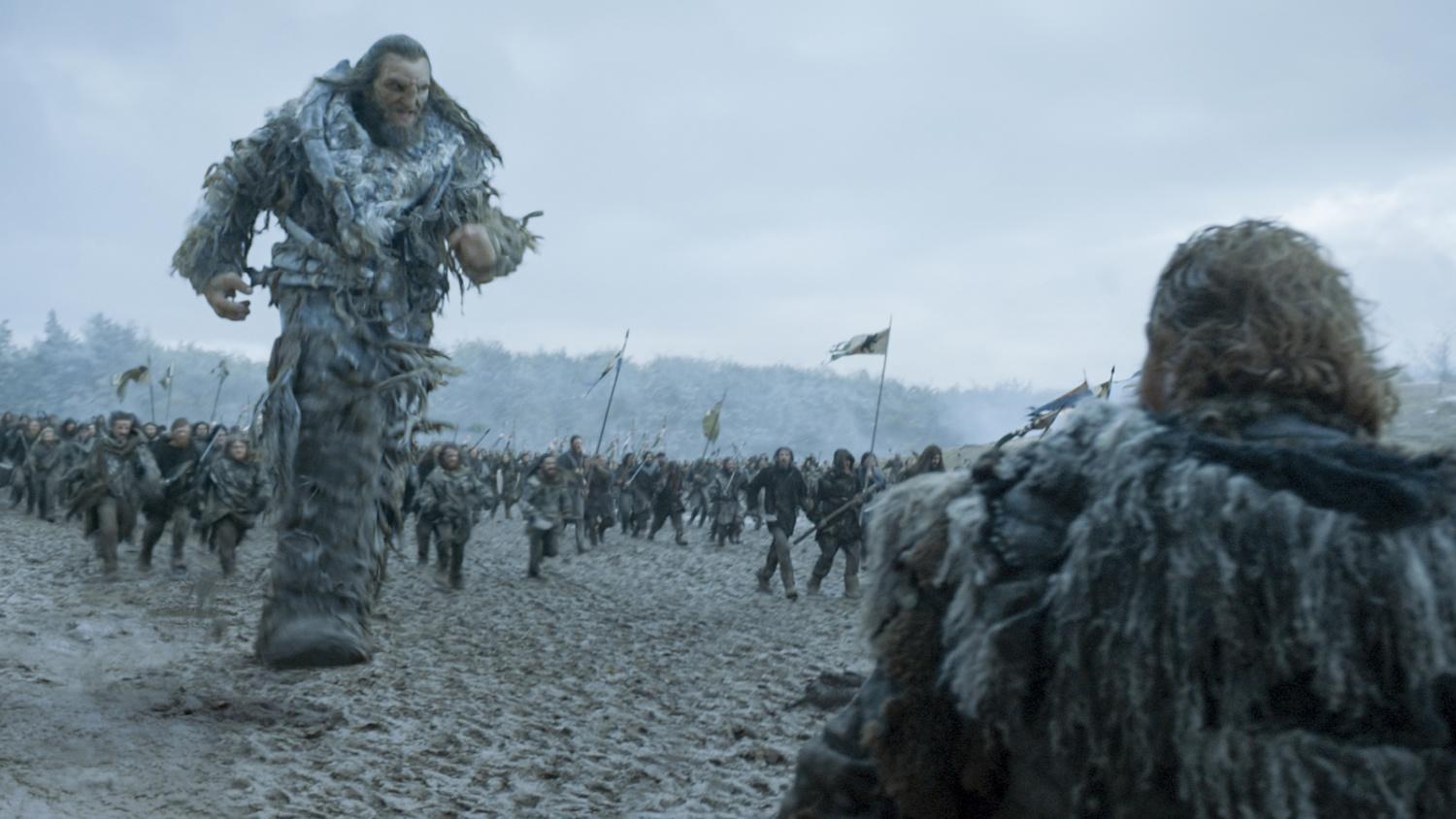 In exciting location news, we have been hearing from multiple sources that there has been much activity (including clouds of smoke) at Saintfield. Why is that exciting? Saintfield was the site for the pre-eminent pitched battle: the Battle of the Bastards! Unlike in season six, this time much of the Winterfell action was shot directly at the gates of the Moneyglass set (which required major remodeling,) but it may be that the sequence is partly being filmed in the battleground where the Boltons were defeated.

If two locations for a single battle aren’t enough for you, there may yet be a third! As you may remember, last month we speculated that the new green screen set at Magheramorne “is probably going to be used for action sequence elements that were deemed to be unfilmable in a real set.” And that seems to be what’s happening:

Oakleaf Photography first showed us that the only real (not to be green screened-out) part of the set was a mantle of snow. As you can see in Libby‘s photo above, now that Moneyglass is done production has moved on to Magheramorne as well as Saintfield. These are all night shoots, just as they were for the Moneyglass battle sequence. That doesn’t necessarily mean they are related, but let’s just say it would be a good bet!

Speaking of gigantic green screens, another one is being built next to the Titanic Studios set. Specifically, the green screen is being erected to the side of the King’s Landing gate: 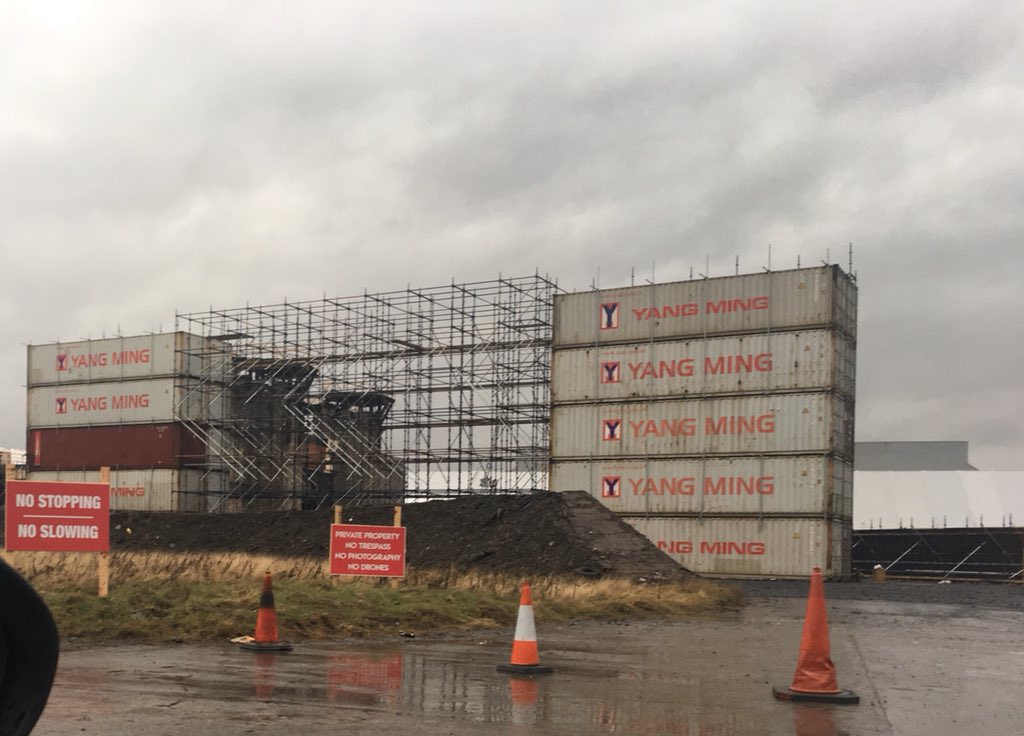 There’s no actual screen yet, but it will be held onto this frame. 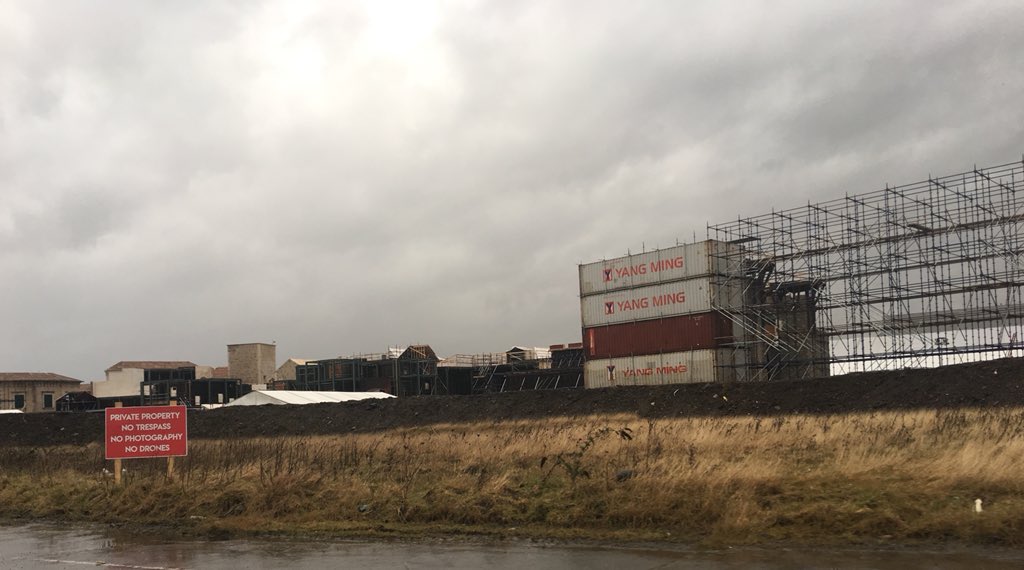 Even if a green screen wasn’t needed, one would help cover up any filming outside the city wall

Incidentally, A Red Priestess shows that the not-yet-breached gate is pretty much done. This is a modular set, built so the gate can appear either intact or utterly demolished:

Finally, we would like to address a photo that’s been making the rounds. You may have seen it in this Youtube video, on Instagram, or perhaps somewhere else. Here it is: 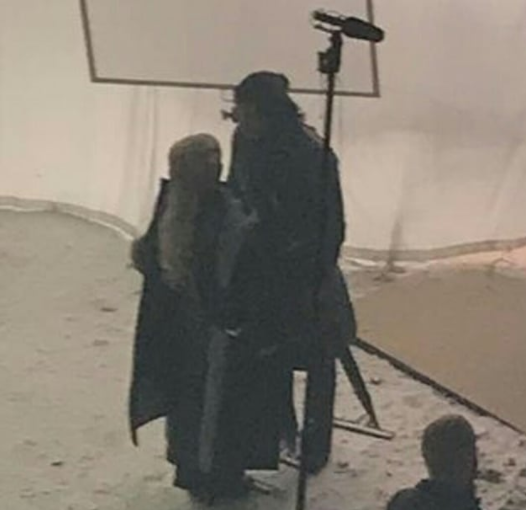 Why the hullabaloo? This rather innocuous photo comes accompanied by completely unsupported spoilers (read them on the sources above.) But the photo simply doesn’t suggest what’s claimed in any way. In fact, we aren’t even sure this is a current photo! Jon Snow seems to be rid of the man bun in season eight, but he obviously still has it in this picture. If Dany’s dress was new, that would be telling, but … we can’t tell! As it is, it’s not just the supposed spoilers that we call into doubt, but the photo itself.

My best guess is this is a photo taken at Zumaia beach, either for season seven episode four, when they went into the caves, or episode five, when Jon went away. Could it be from season eight? It could be. Jon could still wear that hairstyle some of the time. Even the spoilers could be true! But I wouldn’t give it much credence without further proof.