Benioff & Weiss Season 8 Spotify playlist speculation with Vanessa and Samantha! | Watchers on the Wall | A Game of Thrones Community for Breaking News, Casting, and Commentary 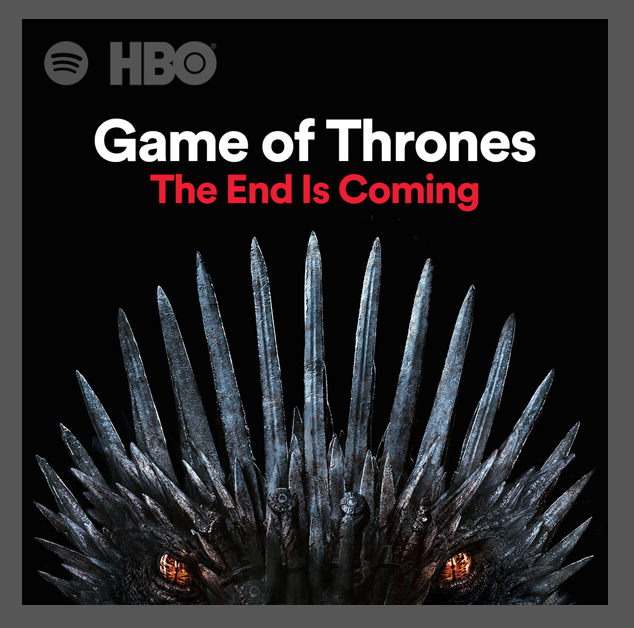 The art for the Spotify playlist “The End is Coming,” curated by Game of Thrones showrunners Dave Benioff and Dan Weiss.

In the two days since Spotify released Dave Benioff and Dan Weiss’ “The End is Coming” playlist, a list of 50 songs that supposedly contain hints as to how the series will end, speculation has been running wild here in the Watchers newsroom. “The answer to the ending is one hundred percent hidden in the playlist choices,” Benioff and Weiss told For the Record in an email. “No one will believe us, but it’s true.”

With that said, Vanessa and Samantha put their thinking caps on and have each chosen a few tracks from the playlist that have been particularly intriguing. What do they mean and why were they chosen? Which potentially earth-shattering events do they reference — and which characters? For a bit of fun, here are a few selections:

“Her Black Wings,” by Danzig

The repeated line of “under her black wings” might make you think this is a reference to Daenerys, but “Harder than life, she offers me sleep … in another form” really made my eyebrow raise — and the verse “Her stride is such/Mortals freeze/When she walks past” drove it home. This sounds an awful lot like how you’d describe the Night Queen. It’s something I thought the show wouldn’t touch on, given the limited time frame of Season 8, but now I’m not so sure. The question is, who would she be?

We all know that a battle is coming to Westeros, but it’s a little too on the nose to say that’s what this song is about. Rather, this song is a look at racism and inequality — “We chose one race superior and another inferior” — and that strife will continue “until the color of a man’s skin serves no more significance than the color of his eyes.” What does this mean for Season 8 — perhaps a tense meeting between Dany’s Dothraki forces and the Westerosi northmen? Or that as a leader who’s brought together both foreign and domestic peoples, Dany truly is the one who will change Westeros for the better?

“Wave of Mutilation,” by Pixies

I desperately want a good ending to Theon’s story, one where he reconciles his Greyjoy past and lives to serve Yara well and faithfully — but I think the ending that’s more likely is that he dies saving her (which is okay too). The lines “Cease to resist, giving my goodbye/Drive my car into the ocean” make me suspect this will be the case. And although I don’t think most of these songs have titles that relate so specifically to a situation or character, “Wave of Mutilation” is pretty spot-on, not only for Theon’s mental, emotional and physical state but also a nod to his ironborn heritage.

This is another one that might be pretty obvious when you look at the lyrics. “But I was drawn into the pack and before long/They allowed me to join in and sing their song/So from the cliffs and highest hill/Yeah, we would gladly get our fill” sounds an awful lot like a reference to the Nymeria-led wolf pack that we last saw in the Riverlands and that we suspect (or at least hope) will be seen again at the battle of Winterfell. There’s a possibility that it also means someone (Bran?) warging into a direwolf again — “And now my fur has turned to skin/And I’ve been quickly ushered in/To a world that I confess I do not know/But I still dream of running careless through the snow” — but I think it might just be a reference to the close connection the Starks and direwolves share.

“This Sentence Will Ruin/Save Your Life,” by Born Ruffians

Can you think of a better way to explain Jon finding out about his parentage than a sentence that has the potential to both ruin and save someone’s life? The song is the story of someone who’s spent a lot of time thinking about what they don’t have and what they think the need, but more importantly, struggling to find out who they are and what their purpose is — “I need to know who I am/And what I’m going to do while I’m on earth.” Well, Jon, you’re about to find out, and I hope to the gods you know what to do with the information when you get it.

I’m going way out on a limb here, but as a HUGE fan of St. Vincent, I just decided to have fun with this (like my beloved Annie Clark has fun with everything): I’m going to say this song means the Golden Company will indeed turn on Cersei. “Can’t you see what everybody wants from you?” is a poignant reminder that sellsword companies only want your money, while “They could take or leave you/So they took you, and they left you” means that the GC may well take Cersei’s money and leave her high and dry once they see the Army of the Dead descending on King’s Landing. It sounds pretty awful for a company to break a contract once they’ve been paid, but it wouldn’t be the first time it’s happened, and to a group of sellswords, it’s not personal — just business. “How could they be casually cruel?” is a line that particularly snags my attention in this respect.

When Jaime Lannister says that you can’t help who you love, it’s just another way of saying “love is blind.” The problem with “blind” love is that it can be problematic and abusive — not unlike the relationship between Jaime and Cersei. The lyrics to this song scream the realization of that abuse and the grief over knowing it has to end — “Thread is ripping/The knot is slipping” — not to mention the allusions to Jaime’s gold hand and snuffing out life, either through squeezing (valonqar, anyone?) or wrapping: “Love is clockworks/And cold steel/Fingers too numb to feel/Squeeze the handle/Blow out the candle … Won’t you wrap the night/Around me?”

As of the season seven finale the White Walkers are on the move with the Army of the Dead, invading Westeros and bringing destruction as they come. With lyrics like “We come from the land of the ice and snow/From the midnight sun where the hot springs blow/How soft your fields so green/Can whisper tales of gore/Of how we calmed the tides of war/We are your overlords,” Immigrant Song seems to state the purpose of the White Walkers pretty well – after all, there won’t be any more war once everyone is a mind controlled wight, right? There may be a small ray of hope at the end, however, as the song concludes “now you’d better stop and rebuild all your ruins/For peace and trust can win the day/Despite of all your losing.”

This song’s inclusion is interesting, as it brings Theon Greyjoy to mind. The song title translates to “A Fly’s Savior” (I don’t get it either), but if you think of Yara as the fly the lyrics fit really well: “I rushed down to the lake/A savior/I built a ship and said a small prayer/Because I was scared…He is both on/Sea and land, saving/Flies that die here/Though especially himself/Eternal war and peace nowhere.” It’s difficult to say whether this points to their survival or not, but I have hope!

There is another possibility for this song being on the list, as the cover art shows a baby with wings. Could this be a dragon (Targaryen) baby? It’s another potential hint that Dany will be pregnant in season eight. 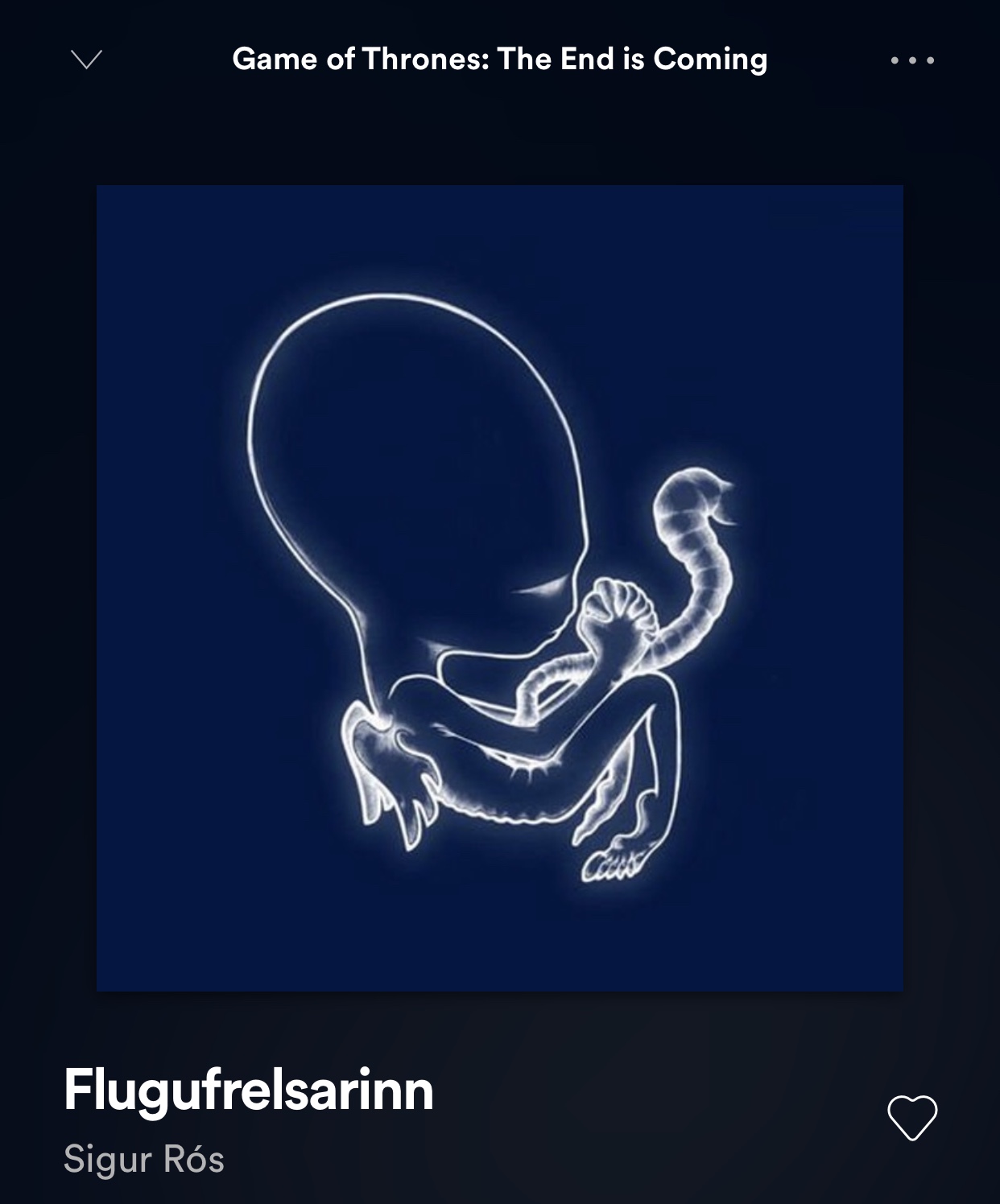 There have long been theories about the destruction of King’s Landing, and Dany’s season two vision in the House of the Undying certainly added fuel to that fire (pun intended) as she walked into a burned and destroyed Red Keep. We may finally see it happen – as well as Cersei’s downfall – if these lyrics are any indication: “Politicians hide themselves away/They only started the war…Treating people just like pawns in chess/Wait ’till their judgement day comes, yeah/Now in darkness world stops turning/Ashes where the bodies burning…Day of judgement, God is calling/On their knees the war pigs crawling/Begging mercies for their sins.” This doesn’t bode well for the Lannister queen’s fate.

Speaking of Lannisters, perhaps we should be concerned for all three siblings. A “Gold Lion” is the sigil of their house, and while the lyrics aren’t particularly alarming (although the phrase “Take our hands out of control” could be telling), the video is a different story. Several instruments are set alight, and the fire eventually surrounds the entire band. Is House Lannister destined to go down in flames?

The marketing for season eight has been pushing a “For the Throne” narrative, and speculation has run wild about who will win the Iron Throne. Many fans think that the throne will ultimately be destroyed at the end, however, and that a new form of governance will arise in Westeros. “Power” certainly supports that narrative, with lyrics like “I seen people abuse power, use power, misuse and then lose power/Power to the people at last, it’s a new hour…Take the power in your own hands…No one man should have all that power/The clock’s ticking, I just count the hours.” We may not see a true democracy, but a more even distribution of authority via a ruling council would be a start.

What do you think of the playlist? Did any songs stand out to you? Let us know your theories in the comments!