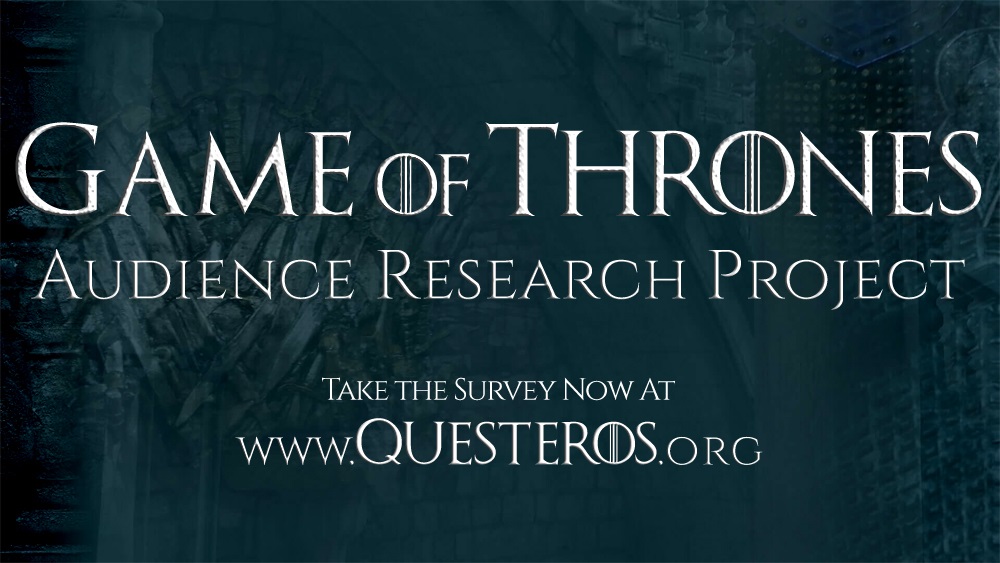 I know you’re an opinionated lot of Game of Thrones fans here at Watchers on the Wall, so I wanted to share with you a new opportunity to speak your mind. Questeros is part of an international research project that wants to know your views about Game of Thrones in an online survey.

The researchers for the Game of Thrones Research Project have recently launched the survey, which take about 20 minutes to complete, on the project’s website at Questeros.org. The questionnaire is very straightforward and mostly multiple-choice, with the option of answering more in-depth in the open spaces if you want to.

The project is created and run by a group of over 40 researchers from around the world, led by Professor Martin Barker from Aberystwyth University in the UK. The research project is entirely self-funded, and isn’t connected with HBO or George R. R. Martin in any way. It’s being conducted by a group of university researchers with an interest in fantasy films and television. Some of the researchers involved also worked on similar projects like The World Star Wars Project, The World Hobbit Project, and the Watching The Lord of the Rings Project.

The results and findings of the project will be made publicly available eventually. The survey will be open well into 2017, after Season 7 of Game of Thrones finally airs.

The GoT Research Project wants to gather thousands of people’s views on the series, and has asked for our help with it. The more responses they receive to the survey, the better the final result will be, so spread the word about the project! Take the survey, and stay up-to-date with the Game of Thrones Research Project on their Tumblr, Twitter and Facebook.