Sand Snakes Showily Slither Into Spain: Indira & Rosabell Sighted in Cáceres! | Watchers on the Wall | A Game of Thrones Community for Breaking News, Casting, and Commentary 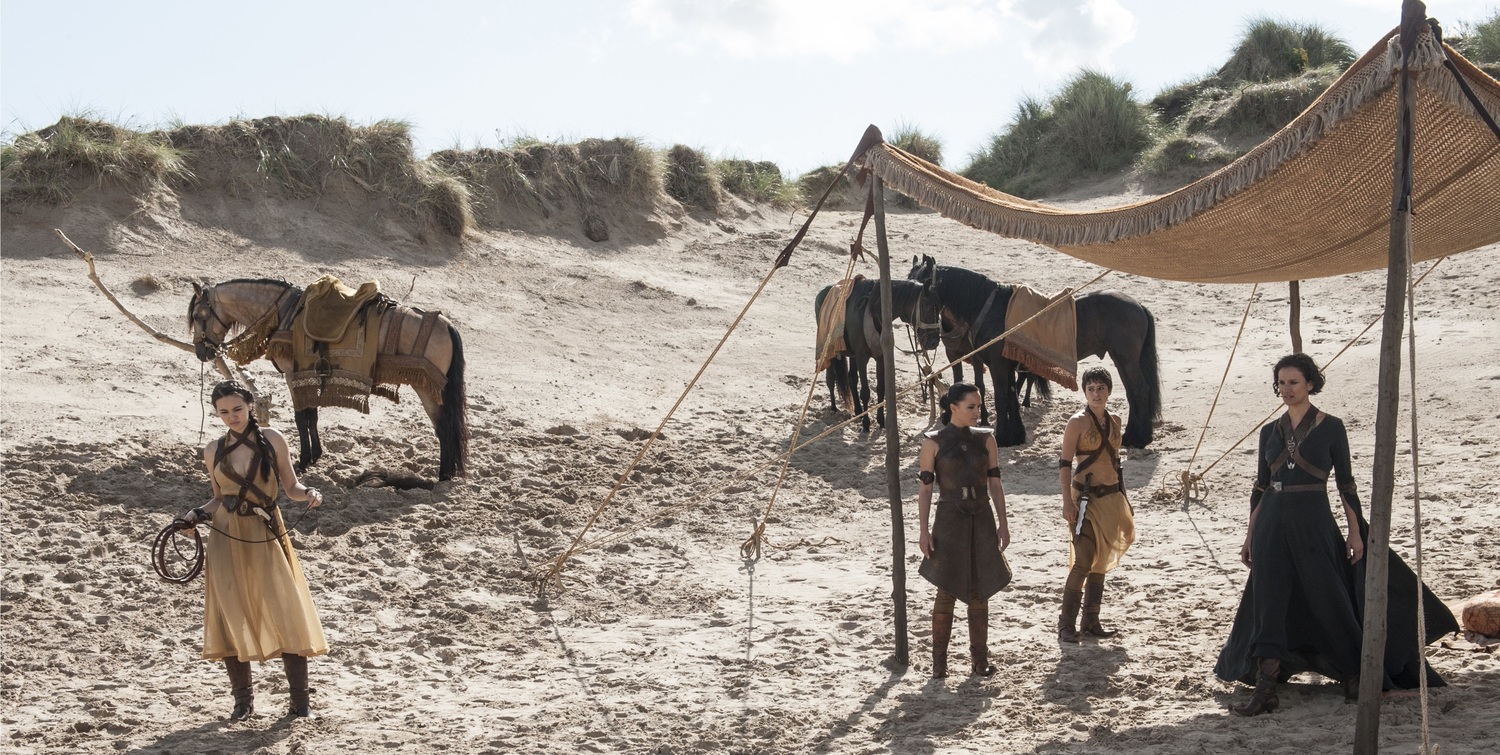 Nymeria, Obara, Tyene and Ellaria in Season Five, “The Sons of the Harpy”

We haven’t seen much of Ellaria and the Sand Snakes in Game of Thrones. In their story so far, Ellaria witnessed the Mountain’s all-too enthusiastic rubbing of Oberyn’s eyes, recruited his bastard daughters —Obara, Nymeria and Tyene— and plotted their revenge. After a spectacularly botched assassination attempt, they got it right on their second attempt, murdering Princess Myrcella, Prince Doran, and his son and heir Prince Trystane. Ellaria took power by taking advantage of the hotbed of dissension in Dorne, and then, along with Olenna Tyrell, decided to align herself with Daenerys.

Since Ellaria and the Sand Snakes will be along for the ride with the Dragon Queen, one would think we are going to see more of them this time, albeit in a purely supporting capacity —Which, pardon the editorializing, may be where these characters shine. They are not dreadfully terrible as some argue; It’s just that they may serve better as pieces in the board for the major players in the game —That is, supporting the main characters.

However, we haven’t seen much of their actresses. In fact, the only blip in the radar was a sighting of Indira Varma and Rosabell Laurenti Sellers back in September, which confirmed the return of Ellaria and her daughter Tyene. Then, there was nothing, not a single trace of them —That is, Until today! The Sand Snakes have arrived in Spain.

This evening, Indira Varma and Rosabell Laurenti Sellers were sighted again, but this time it was in Cáceres, Spain. They took a photo with a local fan, Indosfemo:

Unless they have hidden in the grass like a viper, Varma and Laurenti-Sellers appear to have arrived today, just in time for tomorrow’s filming at the Old Town of Cáceres. The two main sets are ready —And, in particular, the one to be used tomorrow is decorated for what appears to be a Lannister-themed occasion. What does this mean? Read ahead for some speculation… But it involves major season seven spoilers, so please BEWARE!

A few months ago, Watchers on the Wall exclusively reported Euron would pledge his forces to Cersei and attack Daenerys’ Westerosi fleets, kidnapping one of his Greyjoy niblings and killing at least one of the Sand Snakes. If we connect the dots, Euron’s success means he may return victorious to the capital and flaunt his booty and captives in a big parade… like the one the showrunners discussed back in February —Which could be the set they built from the Arco de la Estrella at Plaza Mayor, through the street of the same name, to Plaza de Santa María, and perhaps Plaza de San Jorge too. Decorated as a marketplace, the set at Plaza de las Veletas looks like it belongs in a different scene —Perhaps with Davos and Gendry, as we recently speculated. Indeed, earlier today HOY confirmed that filming at Las Veletas will take place on Thursday.

If this mix of suspicions and spoilers pans out, it would mean Obara and/or Nymeria are the Sand Snakes who die during the sea battle, while Ellaria and Tyene survive… Only to be kidnapped, paraded through the streets of King’s Landing, and meet what I can only imagine is an even worst fate at the hands of Cersei and Euron. Together, these two like-minded mad monarchs could think up truly perverse tortures and executions.