Updated! King's Landing Comes to Cáceres as Season 7 Filming Begins in the City | Watchers on the Wall | A Game of Thrones Community for Breaking News, Casting, and Commentary 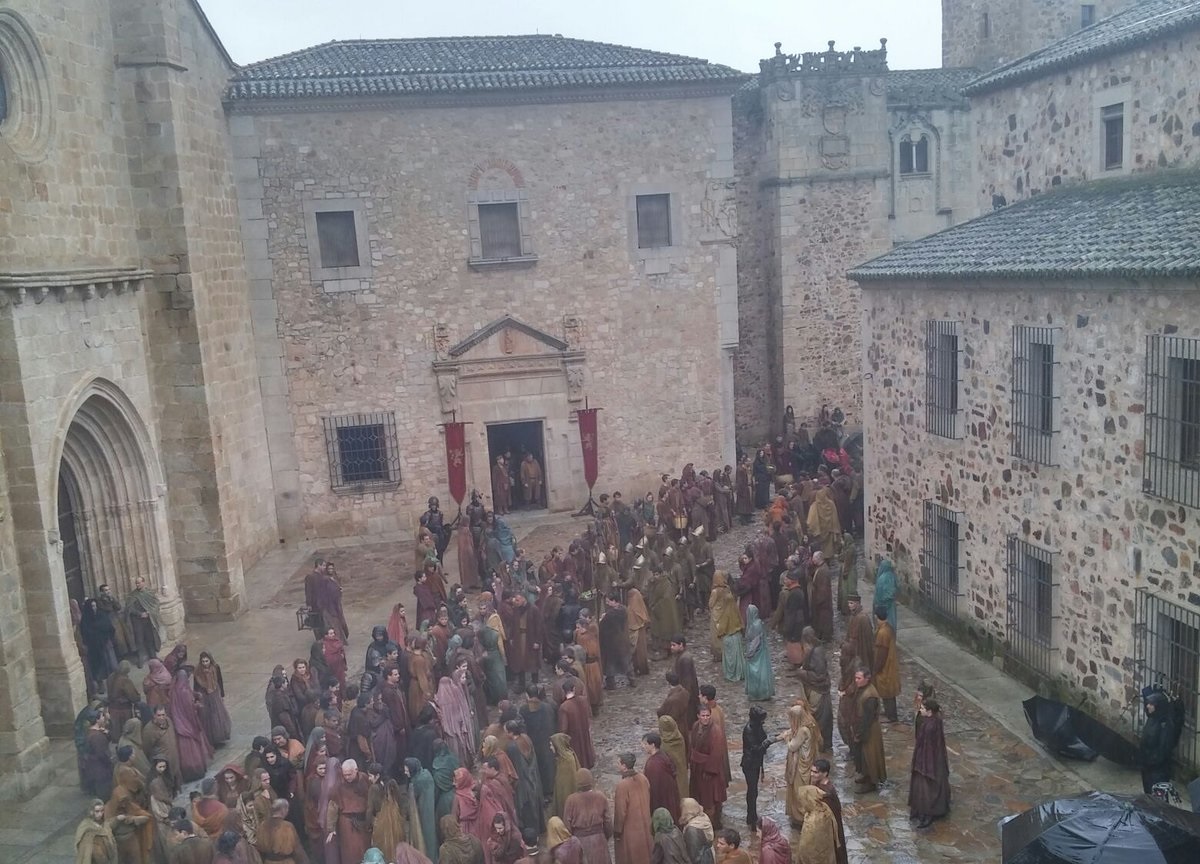 This morning Lannister banners adorn the walls of Cáceres, extras congregate for Game of Thrones filming, and there’s no doubt that King’s Landing has once again been reborn on location. There’s a slight twist however: the rains of Spain will provide an unexpectedly authentic touch today, though apparently it’s not slowing down filming. Bad weather season has finally come to the capital city of Westeros. How long before winter arrives on their doorsteps?

Hoy confirms that filming starts today in the Plaza de Santa María and its surroundings, and then on Thursday, shooting will focus on the Plaza de las Veletas. The crew has been busy getting the locations ready for season seven filming over the past week.

Filming will take place around the plaza and the areas close to it, such as the Cuesta de la Compañía, which has been draped with awnings to take on the look of a King’s Landing alleyway.

The Arco de la Estrella is part of filming today as well:

With filming in such a public place, it’s no surprise that images are leaking out, including this shot of the large crowd of extras, prepared and waiting for filming:

You can see extras arriving to work in this video clip, dressed as typical denizens of King’s Landing, Lannister guardsmen, Gold Cloaks, and some black-clad men. It’s not clear who they are. The style of costume is a bit similar to the Ironmen’s costume, but the black is unusual. A new look for Euron Greyjoy’s men, perhaps?

And the good old G&H trailers set up in town for the crews earlier today!

#GoT season 7 stars his filming at #Cáceres this morning… #JuegodeTronos pic.twitter.com/fPjyMj0ZFl

The question now, is what are they filming for King’s Landing? Cersei (Lena Headey) is usually the go-to guess for KL filming…but Headey just arrived in Dubrovnik, along with Hafthor Bjornsson, and Nikolaj Coster-Waldau is also in Croatia. If the scene doesn’t involve Cersei, Jaime, or the Mountain, who is part of it? Yesterday we saw Indira Varma and Rosabell Laurenti Sellers arrive in Cáceres, so it looks like Ellaria and her daughter Tyene are part of shooting on at least one of these days. Hopefully today’s public filming will bring more answers and clarity!

After wrapping up these scenes over the next two days, Game of Thrones will be officially done with their month of shooting in Spain! The show is expected to take a break over Christmas, and to resume filming after the new year begins, with shooting going until February.

Update: Fans have run into a newly arrived John Bradley in Spain! Which means we might see some Oldtown filming in the streets of Caceres, since Sam is likely to stay there and not be in King’s Landing anytime this season.

Me and Oli look like trash but OMFG got to meet John West, Sam from Game of Thrones! He was really friendly and on his way to shoot some of the series in Spain! ??? #gameofthrones #starstruck #SamTarly #soexcited