New photos of Maisie Williams filming today in Northern Ireland! Plus more filming news | Watchers on the Wall | A Game of Thrones Community for Breaking News, Casting, and Commentary 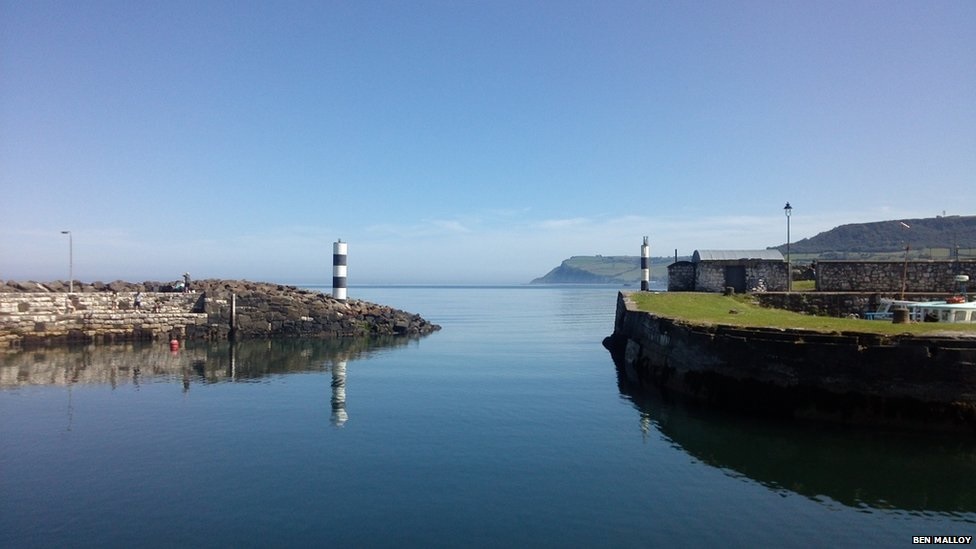 Northern Ireland continues to bustle with activity for filming of Game of Thrones season 6. There have been several more actor sightings in Belfast and today, Maisie Williams was seen filming in Carnlough! The photos will be tucked below the cut for spoiler reasons.

We learned this morning that production was headed for the picturesque harbor in the County Antrim village of Carnlough. One fan, Mark Kennedy spotted crews setting up today and snapped a photo:

@WatchersOTWall #GameofThrones Setting up for filming a scene in Carnlough Harbour today… pic.twitter.com/5U35jsFMb0

@WatchersOTWall Had to leave before the actors came, so i don’t know who would have been in the scene .Security said it was a ‘small’ scene — Mark Kennedy (@abyzz1966) August 17, 2015

Belfast Live solved the mystery for us: it’s Maisie Williams as Arya Stark, jumping in the harbor at Carnlough!

That’s director Mark Mylod talking with her at one point, which means this scene is for either episode 7 or episode 8 of season 6. 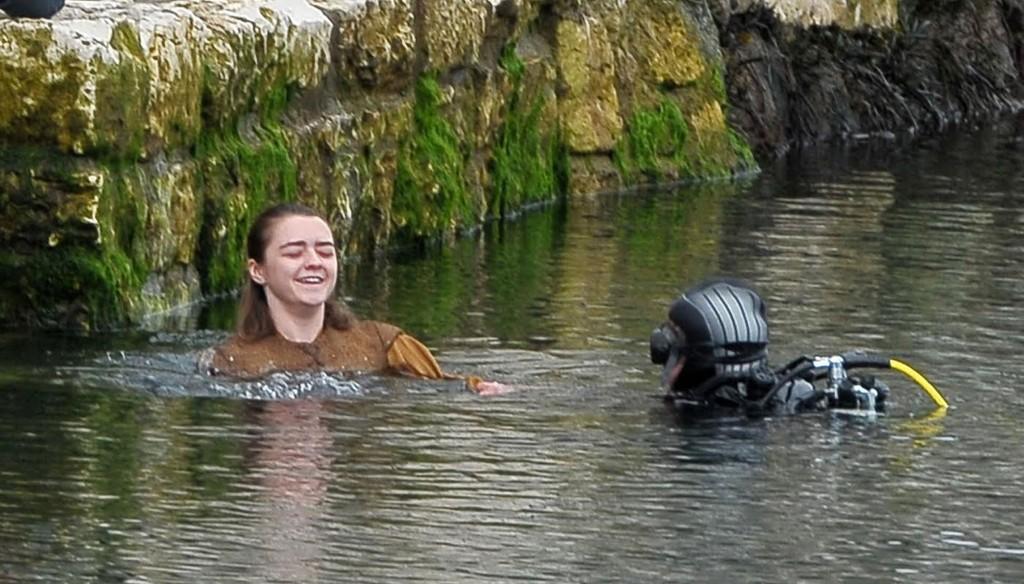 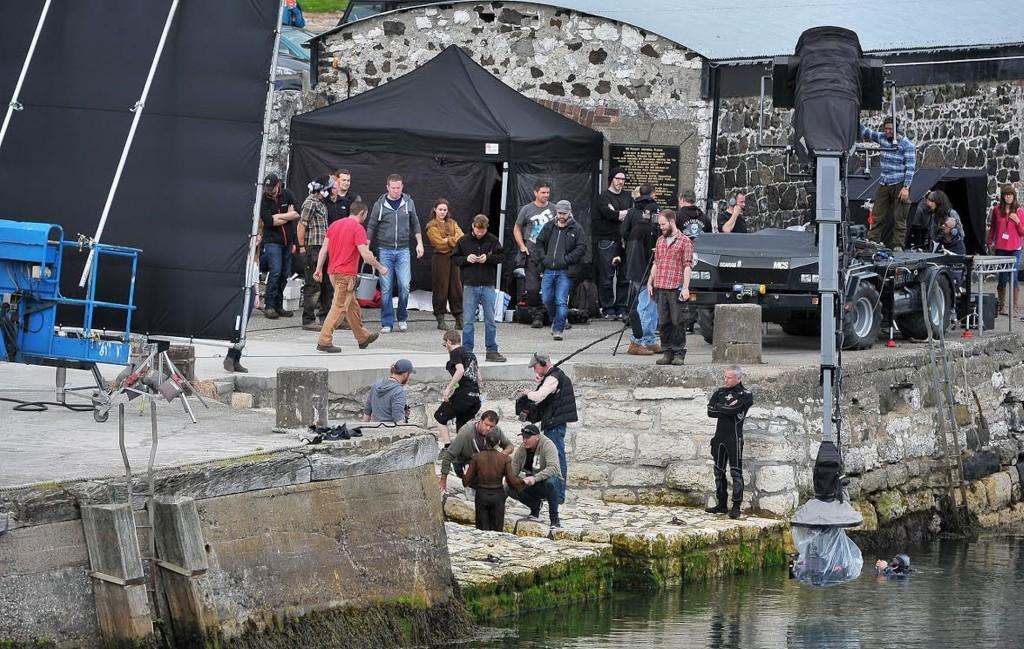 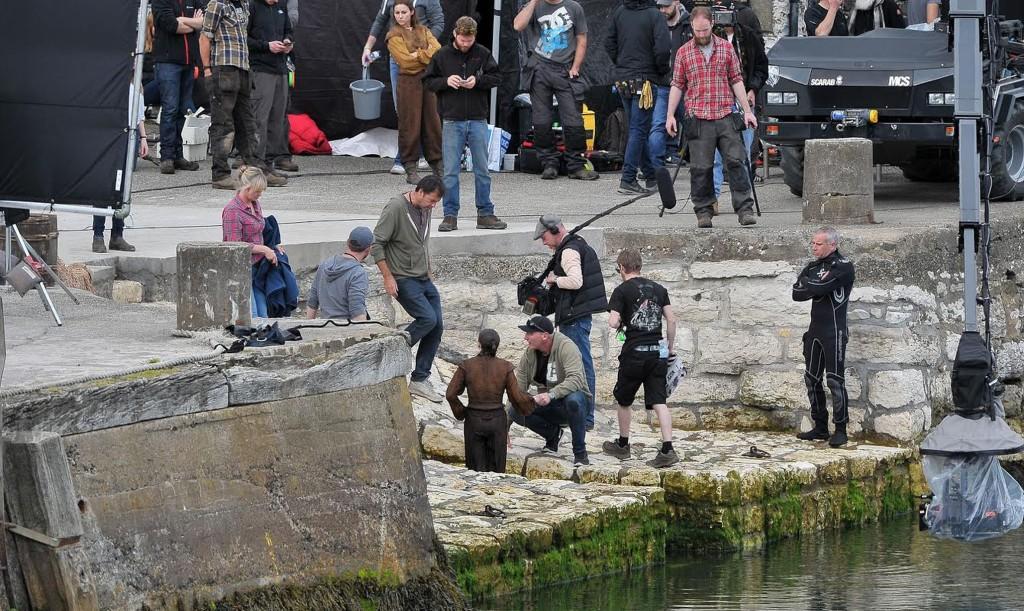 Belfast Live has a full gallery of photos, be sure to swing by to see their pics for more details.

Later, Mark Kennedy spotted a crew filming nearby in Glenarm!

His trip to the Wall was a little less eventful though:

Another fan spotted this piece at Titanic Studios in Belfast a couple days ago:

@WatchersOTWall Saw this tent in front of the Studio in Belfast today. What do you think, Dothraki or Northern ppl? pic.twitter.com/28rYWJKjvT — Eldarion94 (@Eldarion94) August 15, 2015

It appears to be a Dothraki tent, suggesting that Daenerys and her horde-encountering story were indeed filming this week. The show’s leading lady has definitely been in town recently- Emilia Clarke was spotted last week arriving at the Belfast airport, and posed for a photo with a fan on Friday:

My daughter Imogen met the lovely @Emilia_Clarke in Belfast on our way to Castle Ward #GameofThrones pic.twitter.com/clWiQvpHmH — The Organised Home (@OrganisedHome) August 17, 2015

Belvoir Forest may be another possible location to keep our eyes on, according to this chance encounter:

News from another Northern Ireland set: it looks like the Winterfell set in Moneyglass may be coming down?

Also in Belfast this weekend were Gwendoline Christie, Alfie Allen, and John Bradley, seen out on the town, enjoying themselves:

Night out with the Game of Thrones crew #gamesofthrones #gameofthronespost #GoT #hbo #gameofthronesuk #hudsonbar #belfast #Gwendolinechristie #breinne #of #tarth #work #job #beautiful #lady   A photo posted by Fintan Toad McNally (@fintantoad) on Aug 16, 2015 at 4:29am PDT

All in all, an extremely busy week for filming news, between Northern Ireland and Spain! The Game of Thrones cast and crew are a hard-working bunch and it’s only going to get busier.