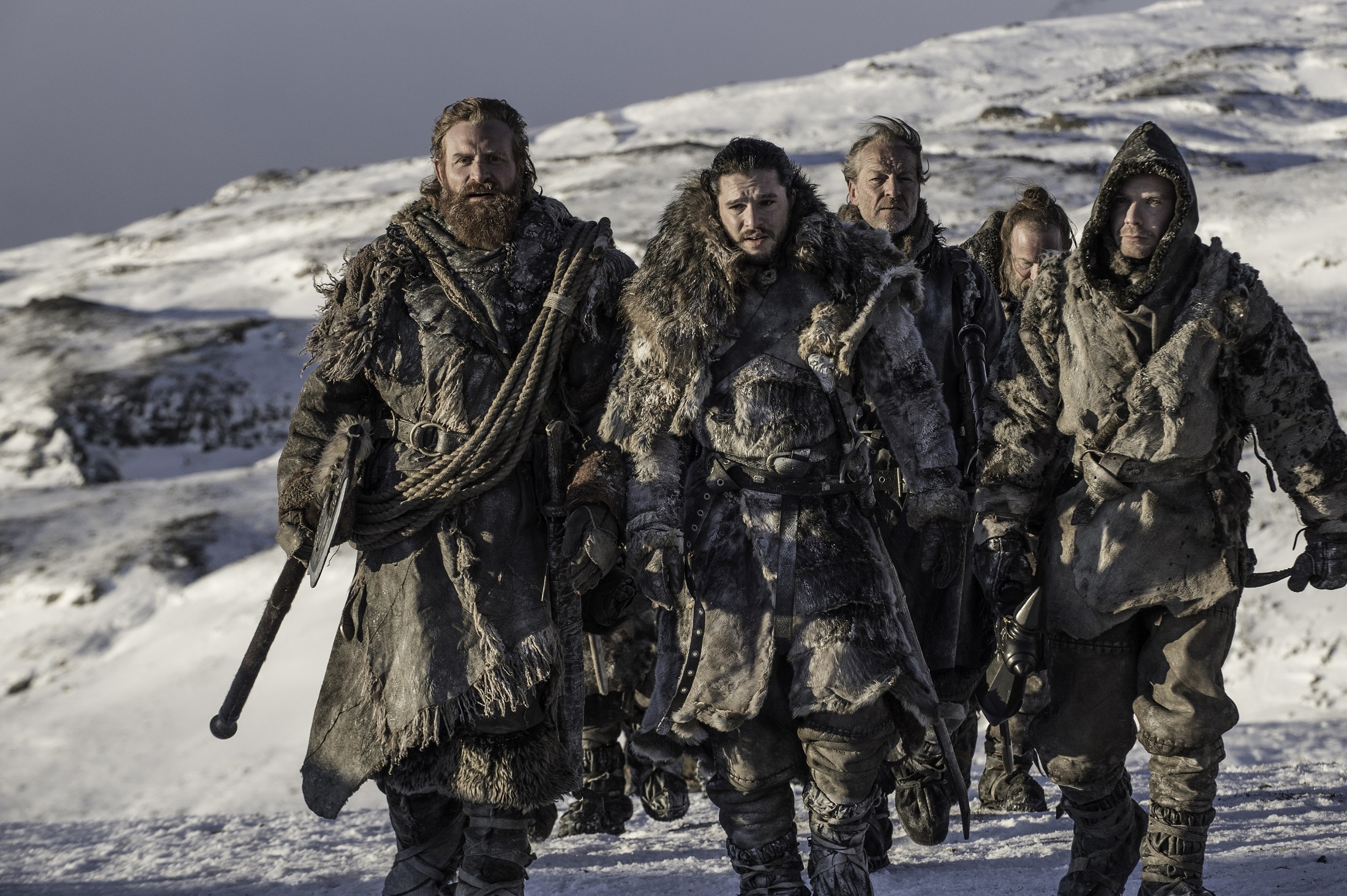 Today, HBO officially released a huge batch of images from next weekend’s new episode of Game of Thrones, the sixth and penultimate of season seven! The episode will be titled “Beyond the Wall,” no doubt inspired by the dangerous expedition Jon Snow and his cohorts set out on at the end of last week’s episode. How are they faring? Let’s have a look!

As usual, Iain Glen looks beautiful in anything, even the frozen North. 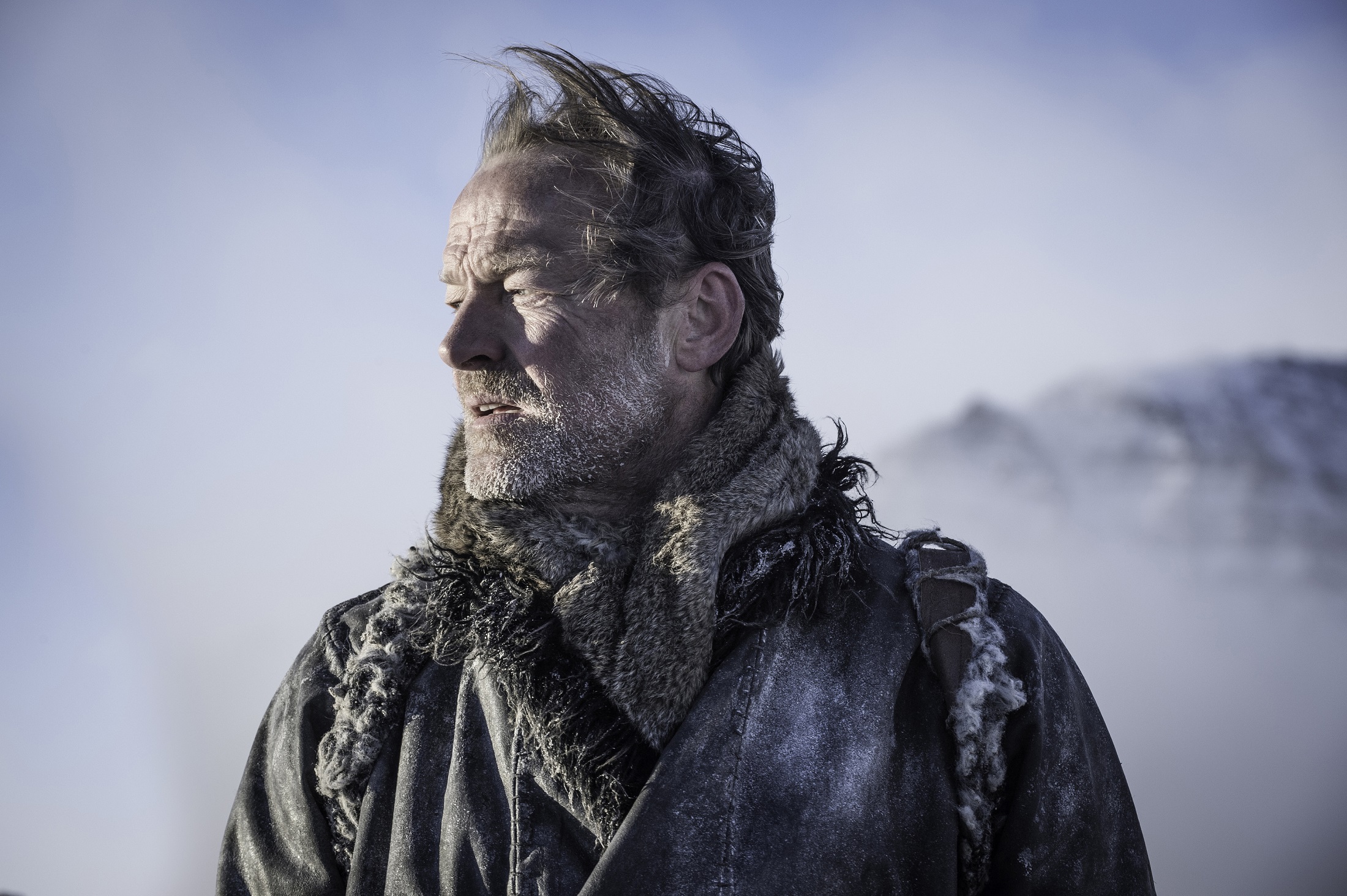 It’s hard to glean much info from these close-up photos but with it snowing, that can’t make the traveling easy for Jon and company. And where the cold winds blow, there’s White Walkers… 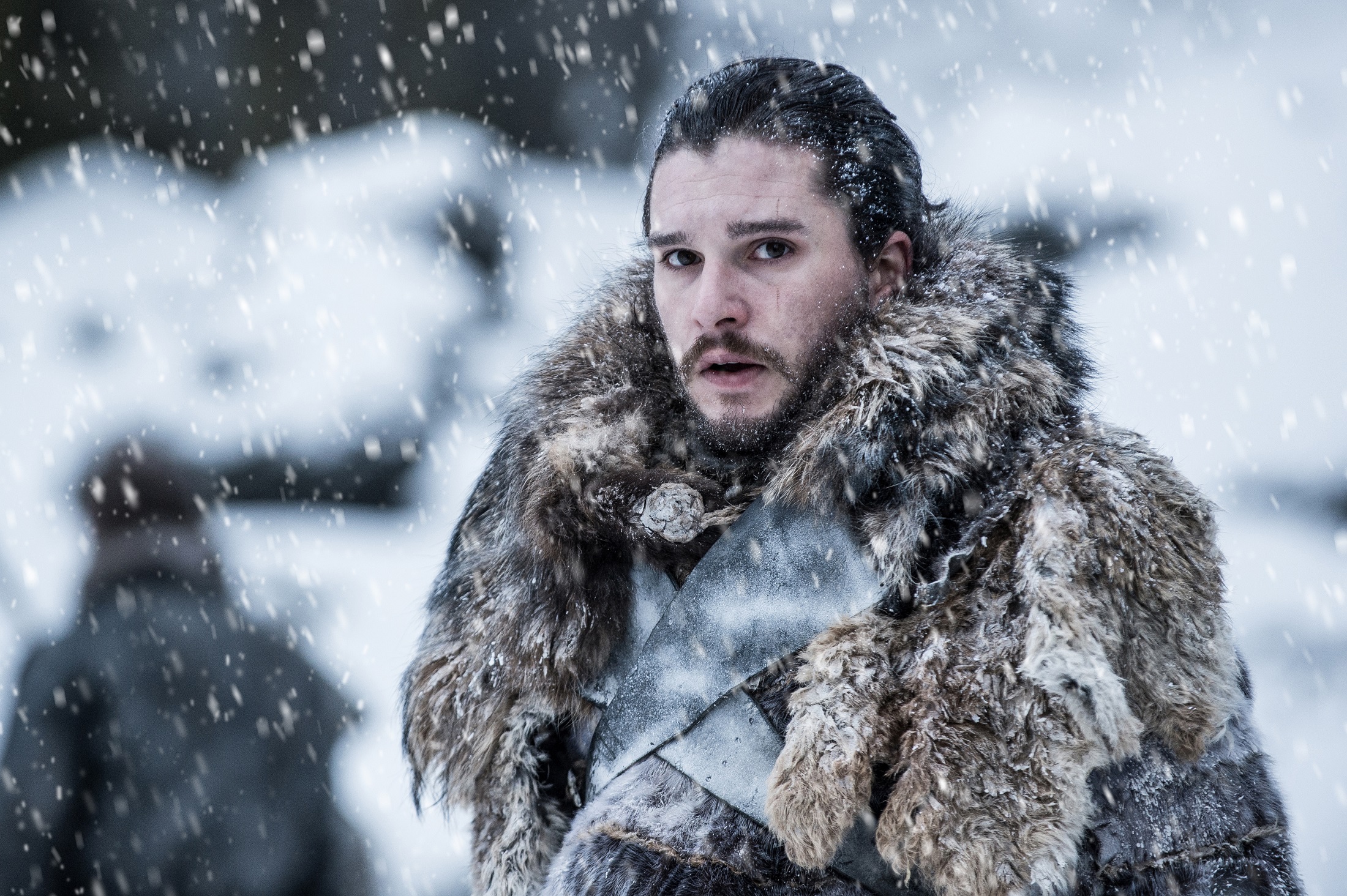 This temperature probably feels about normal to wilding Tormund. So he’s likely thinking about lunch and the Big Woman. 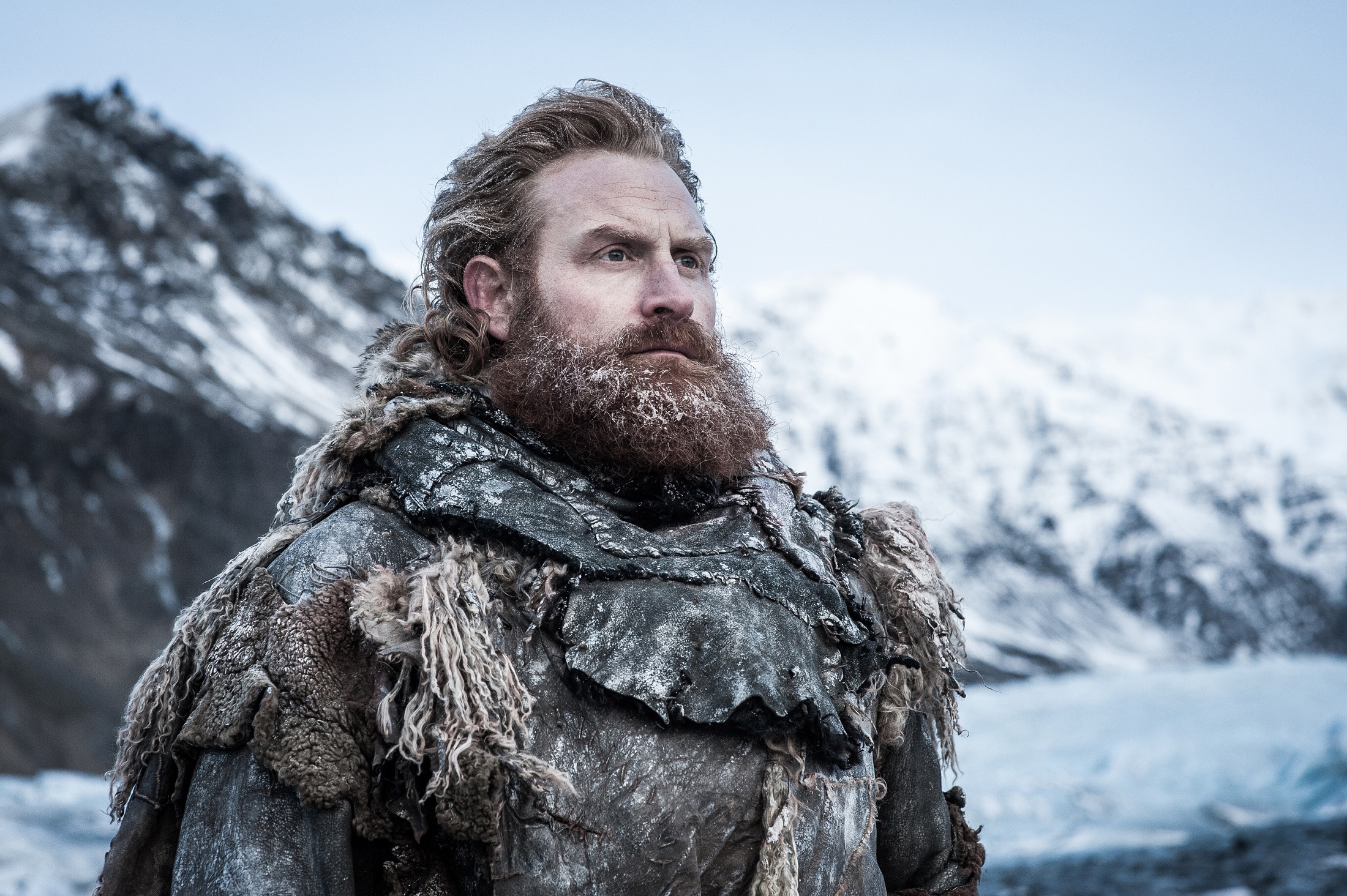 Beric Dondarrion and Jon confer in this shot. What about- their next move? How exactly do they plan to snag one wight without running into a host of others? 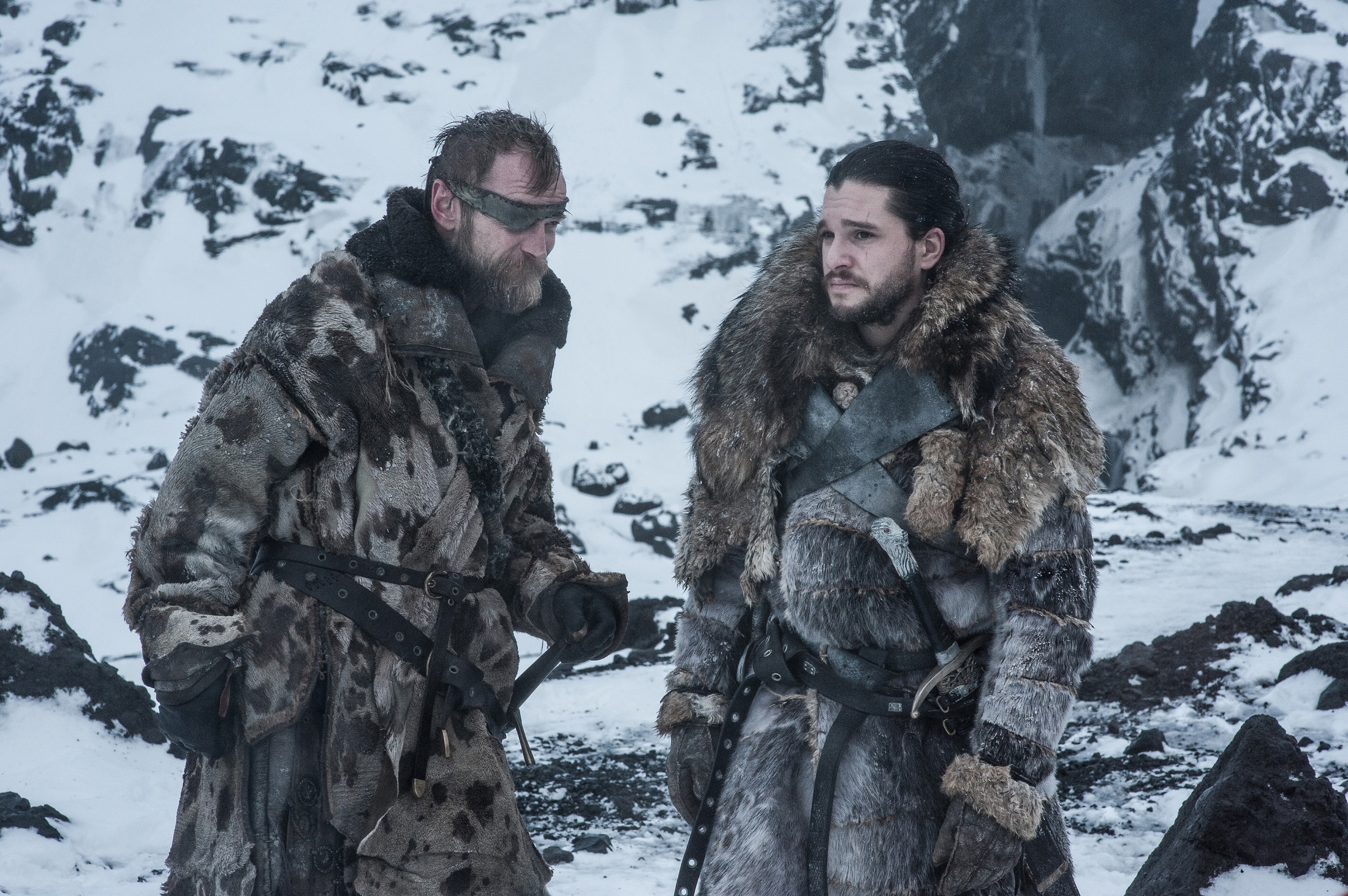 Here’s Beric’s beautiful money shot in HD, as glimpsed in the pre-season trailers, with his sword ablaze. I never get tired of this, and can’t wait to see him taking out whatever dead thing inspire him to light it up this time. 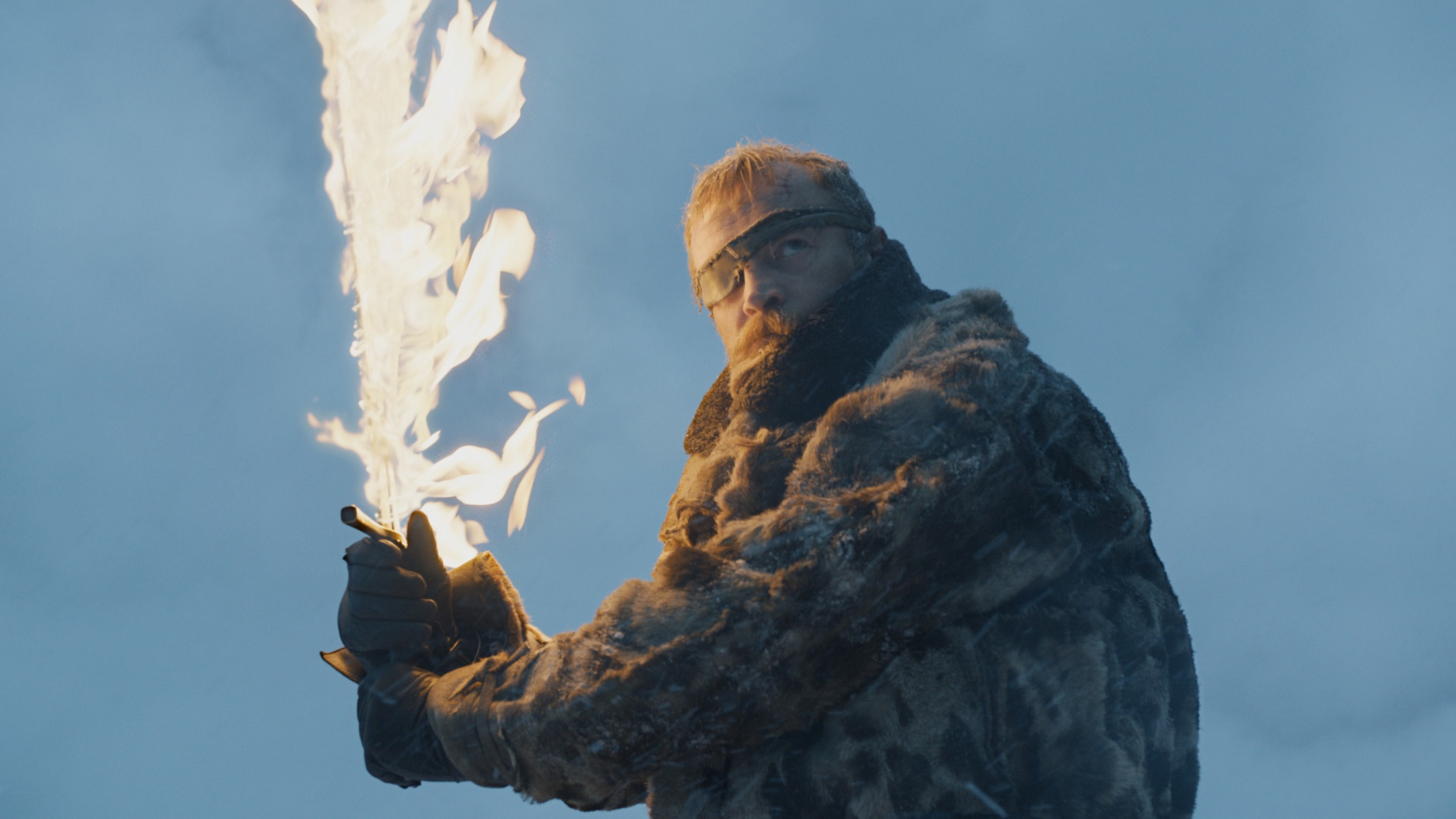 A bit hard to see in the snowy haze, as the weather has worsened by this point, but HBO’s captions helpfully inform us that this is Iain Glen (Jorah), Kit Harington (Jon Snow), and Kristofer Hivju (Tormund). The men are in a circle, a sight we’ve seen in trailers pre-season. Now we know for sure who is up there, beyond the wall. Getting into a circle is usually a tactic people use when they might be surrounded, and need to make sure allies are at their back. So this does not look good for our Magnificent Seven. 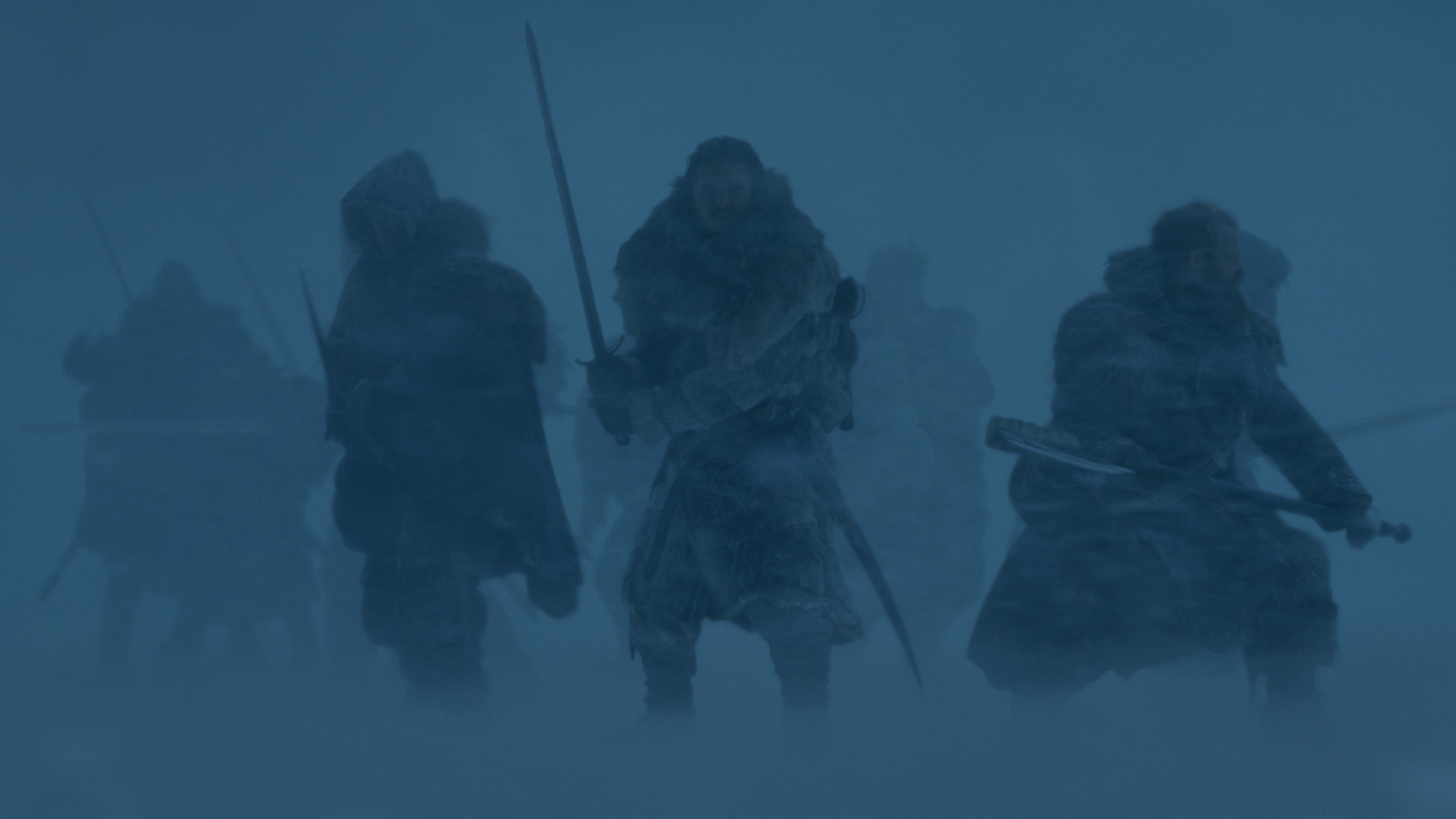 Another close-up, tight on Jon Snow, with sword raised high. 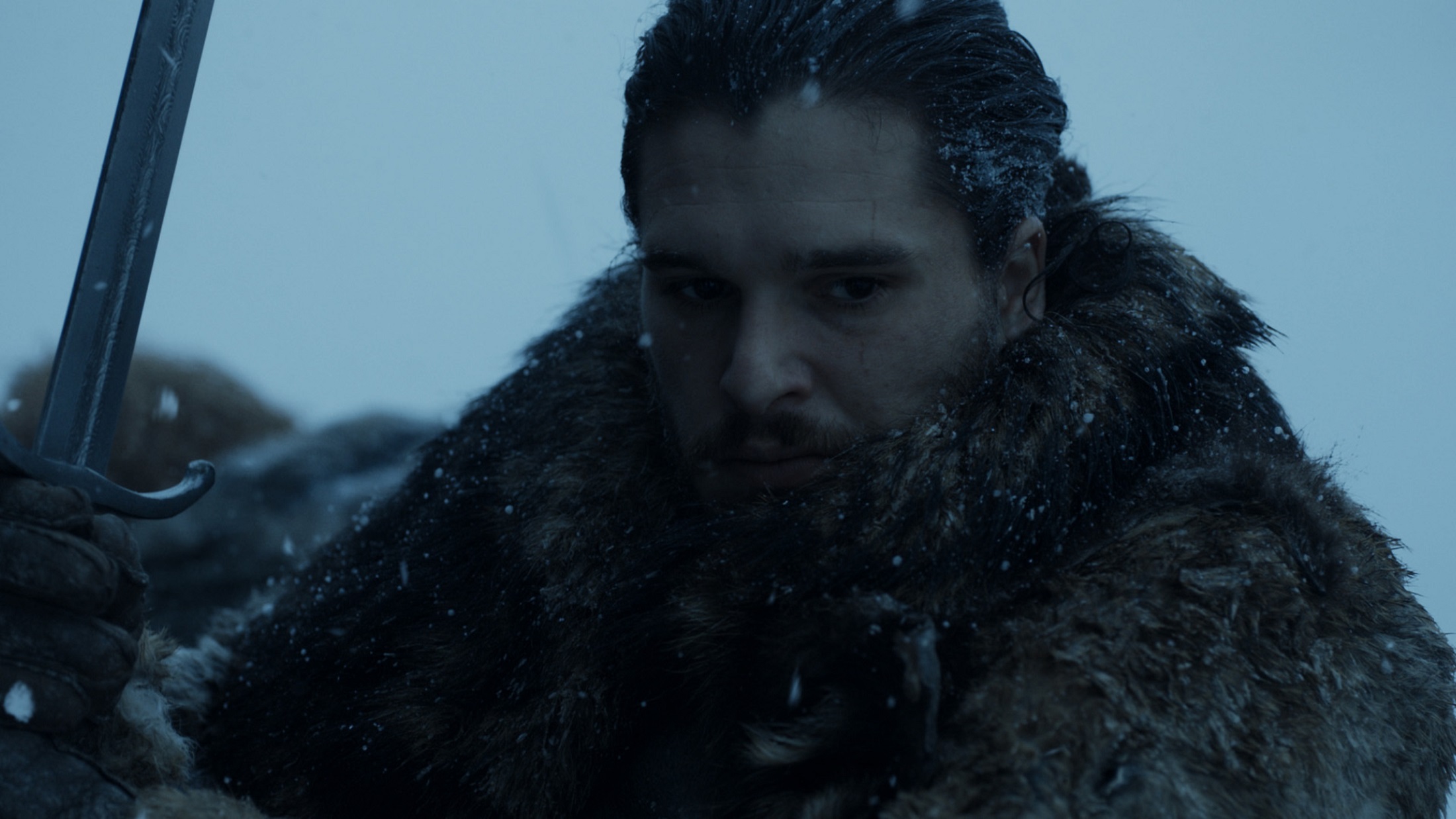 No, we’re not just going beyond the Wall in this episode. We’re still popping down to Dragonstone and Winterfell, apparently. Here we see Daenerys in a lovely white gown, speaking with her Hand of the Queen Tyrion while her children surround them. 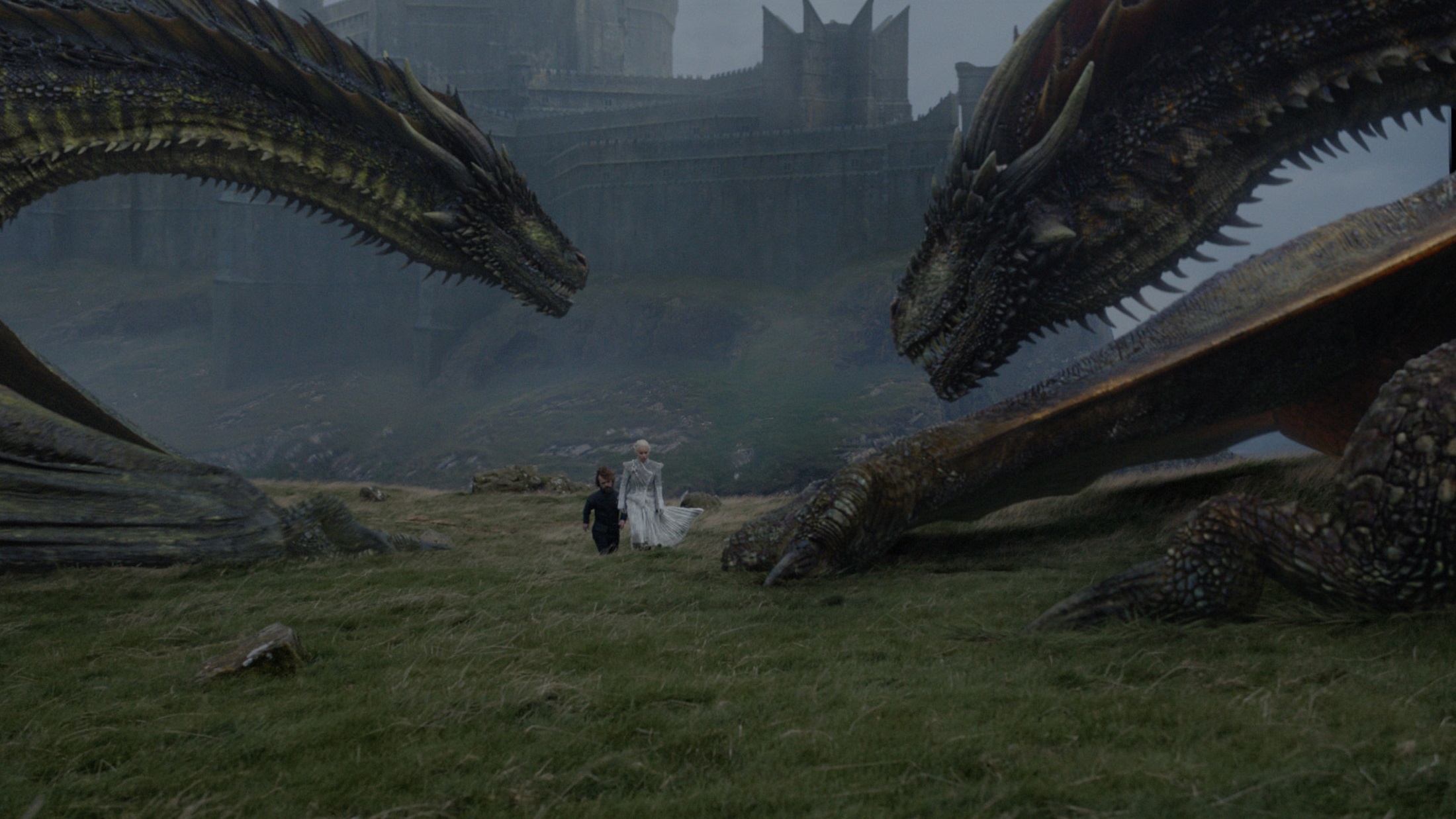 The conversations continue inside at another point, when Daenerys’ outfit has changed, from white to black, and to a much more intimate and less intimidating setting. Will Tyrion question Dany’s actions of late? 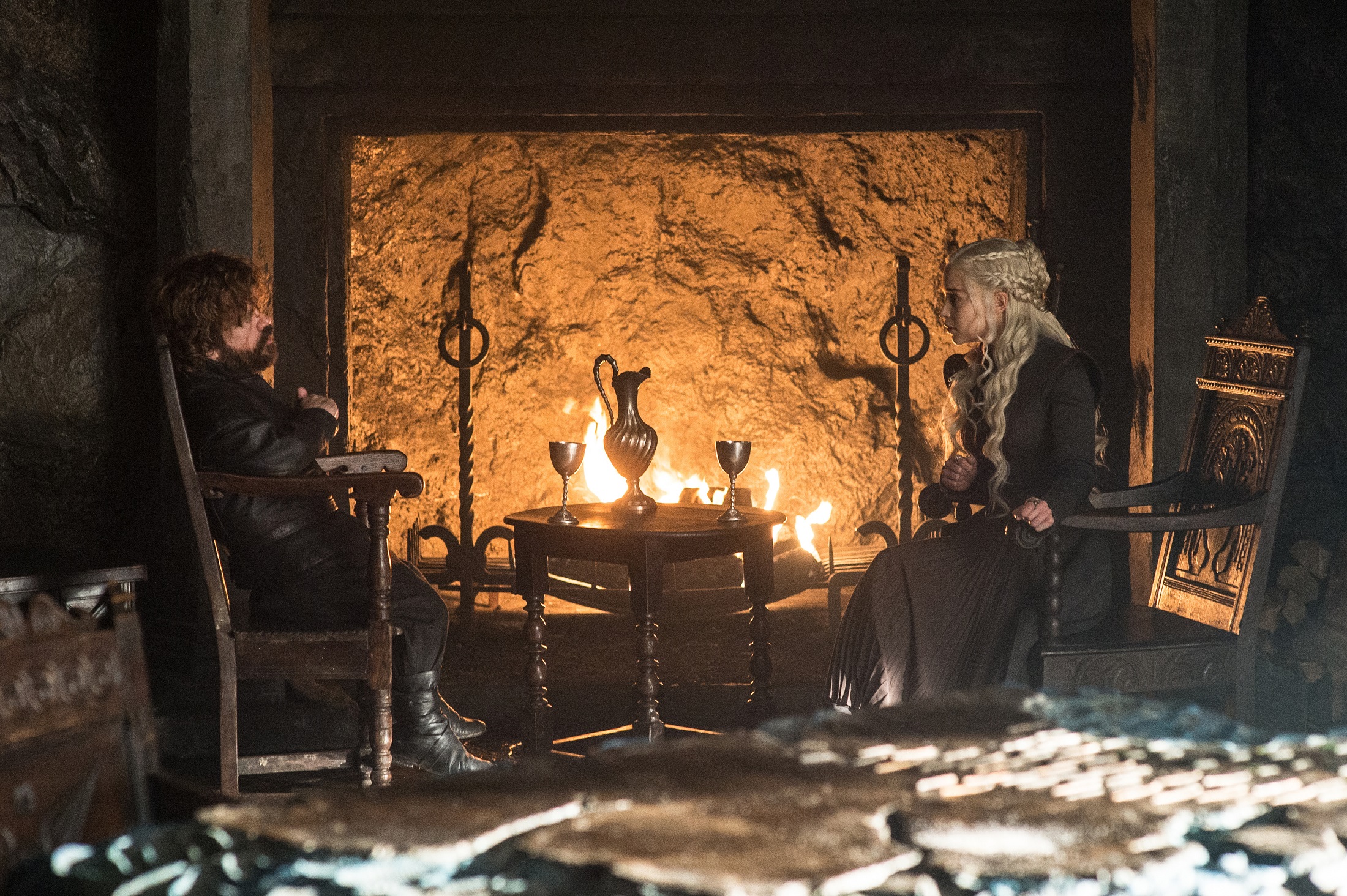 Up at Winterfell, the tension between the Stark sisters appears to be growing greater. Arya gazes out with a tight look on her face; Sansa behind her appears concerned. 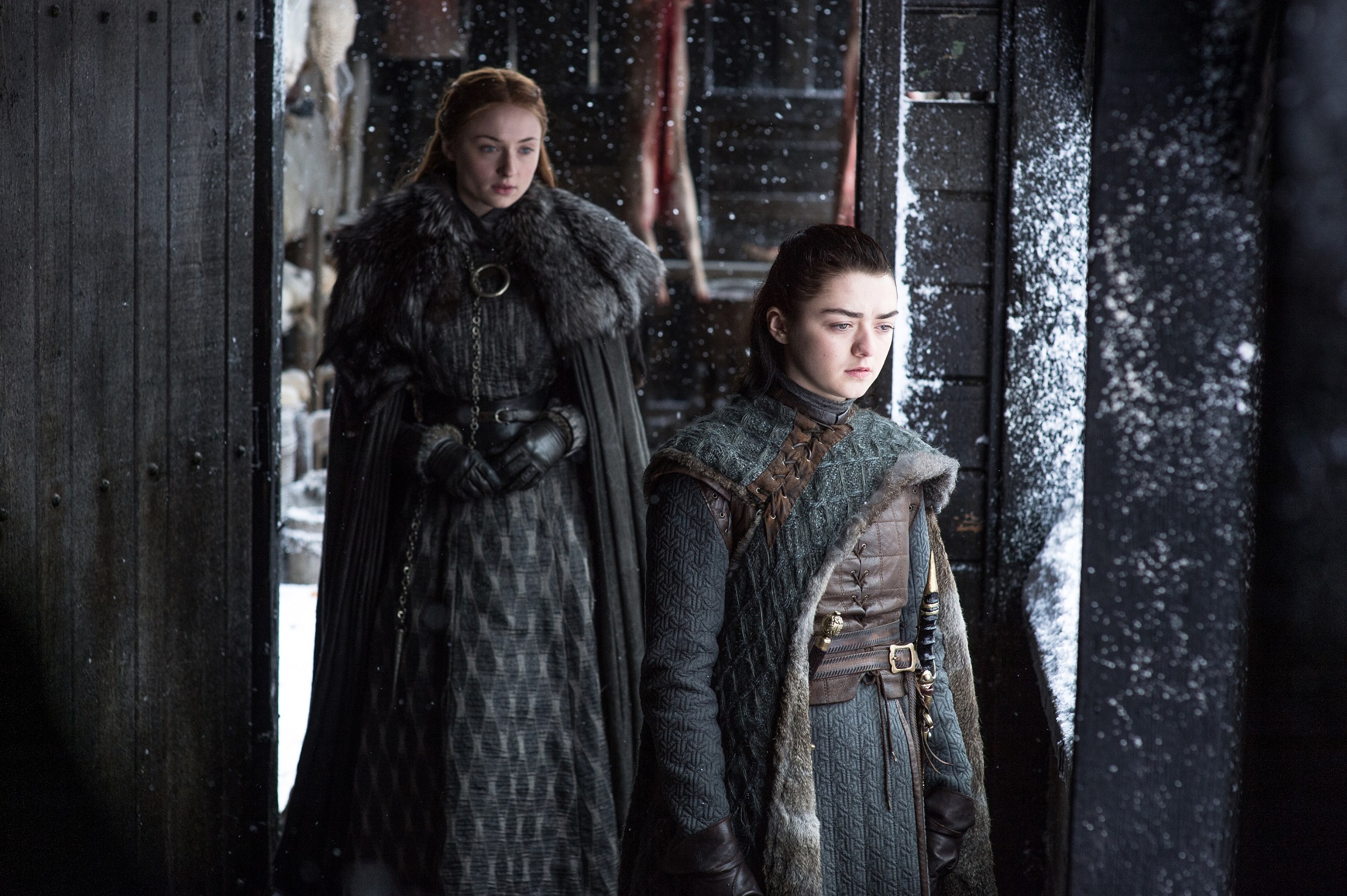 Brienne approaches her lady Sansa here, as Sansa shuffles through some papers. Do these have something to do with Littlefinger’s machinations, set into motion last week in “Eastwatch”? 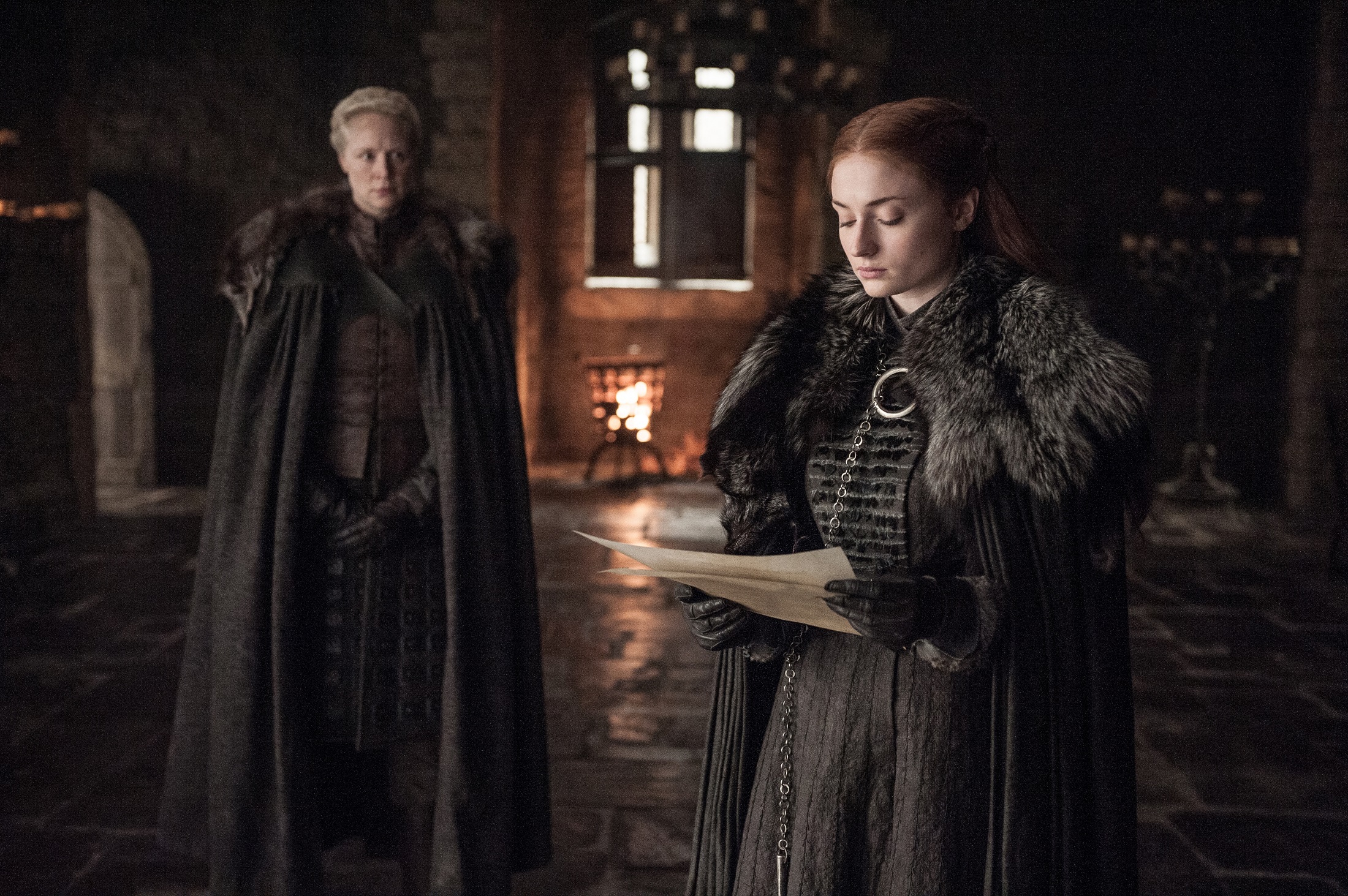