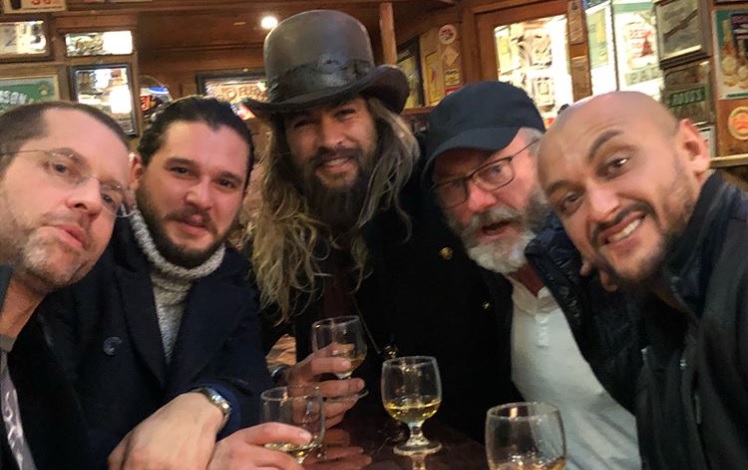 Former Game of Thrones cast member Jason Momoa’s odyssey through the UK continues this week! The man who was Khal Drogo headed on up to Belfast to visit with his old friends, providing fans with a peek at who is in town these days. But before we take a look at the latest sightings, we have a new casting notice to share with you today.

Our sources have dug up an exclusive tidbit for our readers today, with info on a new season 8 role for a child. Details under the cut!

We’ve learned that Game of Thrones is casting for a sad-eyed young girl (ages 9 – 11) for “one excellent scene with a leading cast member.” This isn’t one of the northern children we’ve come across before though- the notice specifically asks for someone with a neutral southern accent and not a northern accent. That indicates this child is going to pop up somewhere around King’s Landing or thereabouts, as most characters on GoT are now clustered in the North. Cersei and her minions remain in the south however, and Jaime has only just left the capital in the finale, so they’re the best candidates for the ‘leading cast member’ in question. Is the character one of Qyburn- or Varys’- little birds, or a poor urchin of the city? Or someone Jaime encounters on the road?

The role will be shooting December 8th in Northern Ireland, reportedly.

Now, back to the Momoa sightings! He’s been kind enough to cut out the random-sightings-middlemen for us and provide the photos directly, once again with a big photoset of pics posted on his Instagram. Momoa is seen with Kristofer Hivju, Kit Harington, Liam Cunningham, Rory McCann, David Benioff, D.B. Weiss, and a few friends of his.

Unite the clans. 24hrs in Belfast GOT Super honored to once apart of this show. I love seeing all my friends and new ones @khivju your a fucking legend Mad crazy love to Dan and David and Every one i saw i know u just started good luck with filming the greatest show in history have fun Aloha Drogo

It’s not the most surprising grouping, this northern-based lot! I can easily imagine them back together again in season 8. As for Momoa’s presence, as we’ve said before, we have no reason to believe he’s filming anything for the show. He’s been promoting Justice League in the UK, and this is just a social call.

Speaking of sightings- Nikolaj Coster-Waldau is also in town! The actor was seen yesterday at his usual gym in Belfast and snapped a photo with a fan there:

He’s looking a bit shaggier than usual. Here’s hoping they keep this look for Jaime in the final season, as the character rides north.