Production team tests a trebuchet at Titanic Studios as cast sightings continue in Belfast | Watchers on the Wall | A Game of Thrones Community for Breaking News, Casting, and Commentary 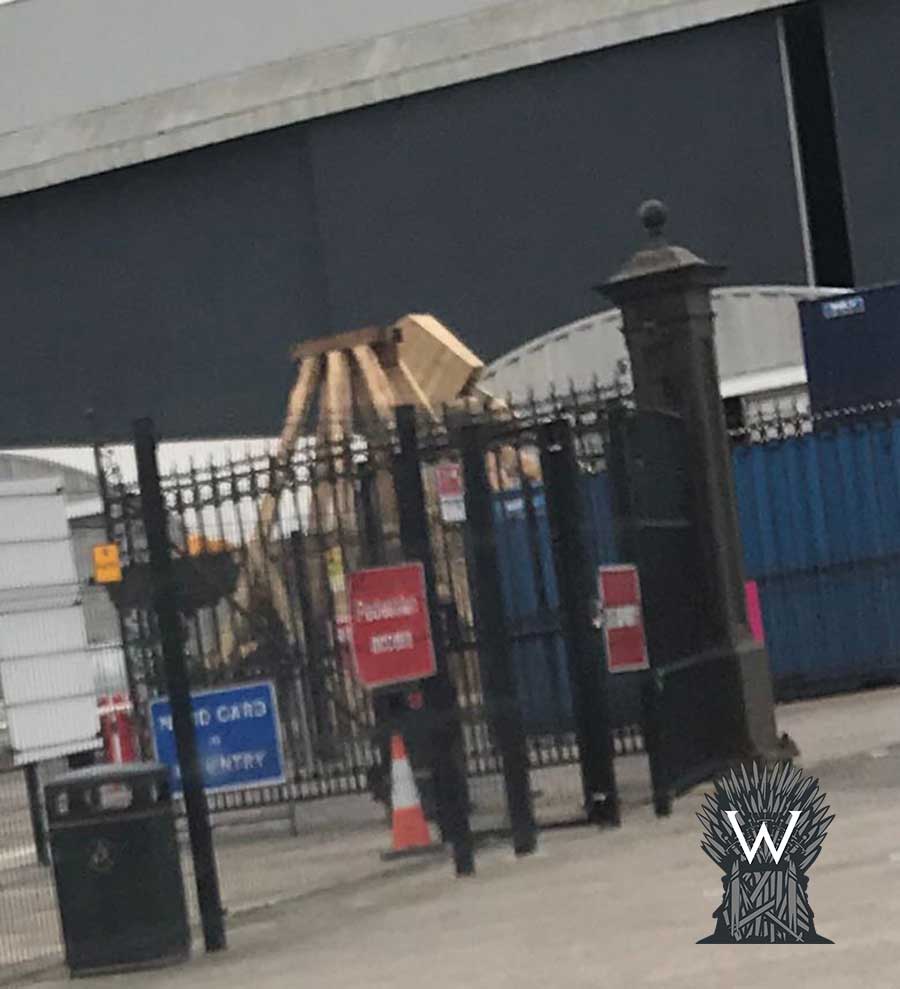 The trebuchet seen on set only a few days ago was given a recent test fire. Photo: Wiki of Thrones

Slowly but surely, news and cast sightings about Game of Thrones Season 8 are continuing to trickle out from Northern Ireland — and this round includes testing a rather sizable weapon, spotting some of the biggest Thrones names out for drinks and once again getting to revel in the cuteness that is Emilia Clarke and Jason Momoa.

It’s one thing to know a trebuchet has been built on set at Titanic Studios in Belfast — it’s another to see it in action. An informer recently managed to capture footage of the enormous contraption being tested at the Northern Ireland location:

The minute-long clip doesn’t show much other than the initial launching, but it’s still pretty exciting to see something like this in motion. We’ve seen trebuchets in battle in previous seasons, so it’s not unusual that one has been constructed for the final Season 8, when we expect some intense fighting between the living and the dead.

Elsewhere, sightings of cast members (both current and former, interestingly) have continued to pop up over the last several days, much to the delight of fans and the Twitter universe. First up is an adorable photo of Emilia Clarke and Jason Momoa from his Instagram — and no, not because Khal Drogo is making some kind of surprise comeback. Momoa was in London to promote Justice League and met up with Clarke, who calls the city home:

Crazy mad insane LOVE for this queen it’s truly like bubbles of giggles are in our bellies when we are together. It’s a shame we don’t get to see each other as much as we would like but when we do i feel like a fucking KHAL love u @emilia_clarke always forever Yer Jalan Atthirari Anni #getreadyhereicome #GOTohana #slaps mahalo @bullchinashope1_ for always taking care of me @cristian.bullinachinashop you make it a home away from home brother. Aloha Drogo

Can I also point out how adorable Momoa’s line about “bubbles of giggles are in our bellies when we are together” is? These two…swoon. Clarke had a similar post on her Instagram, which also shows how much fun the two of them have when they’re together:

It’s possible Momoa also continued to Northern Ireland to visit with other members of the cast; he has occasionally visited the set during filming in the seasons since his character met his untimely end in Season 1, including to film his scenes in Daenerys’ House of the Undying visions in Season 2. That, however, was a discreet trip, and any since then — well, not so much.

Meanwhile, as khal and khaleesi were laughing it up in London, other cast members were sighted in and around Belfast. Tumblr site thewench-and-thekingslayer posted this photo, in which Kit Harington and everyone’s favorite red-haired wildling, Kristofer Hivju, are visible, although the post notes that Nikolaj Coster-Waldau, Gwendoline Christie and Liam Cunningham also were seen at the unnamed Belfast pub:

Twitter user @mwktx also posted about a gathering of cast members. It’s not clear if it was the same location as the pub sighting, but it’s noted that Harington, Cunningham, Hivju and Christie were together:

It’s good to know that work is continuing at a good clip for Season 8, since production and casting news is the only sustenance we have until the far-away time that the final season will air — and we’ll keep you updated whenever we have news to share!