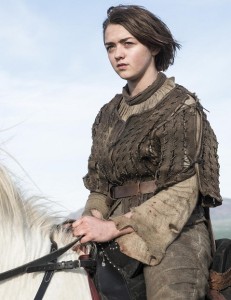 Here are some of today’s highlights of interviews with Game of Thrones cast members, sharing funny moments and teasing season 5.

First up, we have Maisie Williams telling TV Line that she doesn’t know what’s up next for Arya Stark.

“I don’t know, honestly. We’re starting to catch up with what’s been written, so I’d love to do something completely new. Again, I’d love to keep making the book readers go, ‘Wait, is that what’s going to come in the next book? Did they make that up completely?’ I love it when we do something really dramatic and shock everyone. They should throw in more stuff that no one knows about,” Maisie tells TV Line.

Maisie also shares her thoughts on the uproar over the lack of a certain character appearing. For the spoiler-character-referencing answer, please visit the source article.

Access Hollywood‘s Jolie Lash chatted with cast members at San Diego Comic Con this past weekend, and here’s what Rory McCann, Gwendoline Christie, Nikolaj Coster-Waldau, and Maisie Williams had to say about the most awkward times they were recognized by fans.

Back in May, Ciarán Hinds spoke with the Irish Post about his work on the film The Sea, and his role as Mance Rayder on Game of Thrones came up.

Hinds told the Irish Post, “On Game of Thrones I have not yet been roasted, crucified, slaughtered or whatever they do with people in that show eventually, so I will be coming back for shooting again in the fifth series.”

Update: Hinds has actually been sighted in Belfast already this afternoon!

Kit Harington, Maisie Williams, and Gwendoline Christie tell Zap2It how they think their characters would have felt about the Red Viper.