Game of Thrones season 5 filming in Belfast rolls on, with more cast members popping up every day.

As previously reported, Team Dragonstone was headed for the set, and today, the Onion Knight is joining them, as Liam Cunningham boards a plane.

Dublin- Westeros! That is all. #GameOfThrones

Carice van Houten checked in again from the set, showing off parts of her red costume via her Instagram and Twitter. First the boots….
And then the rest!

Daniel Portman, Sophie Turner, and Finn Jones are hanging out with Kristian Nairn in Belfast, too, according to this pic he tweeted yesterday to a friend.

The younger generation also appears to be in town. Former cast member Aimee Richardson, a Belfast-area local, tweeted that she’d be seeing Kerry Ingram today. Kerry herself has been tweeting back and forth the last couple days and sharing dinner with Brenock O’Connor, better known as Olly of the Night’s Watch. The pink Game of Thrones signage was spotted in Larne, confirming our earlier reports that filming is happening in the area of Sallagh Braes this week.

GOT is back, filming around the corner #excited #GOT #GameOfThrones pic.twitter.com/lkeeZP43Tc — Jaclyn (@Jaclyn60) July 29, 2014

We also have this small piece of information. And by small, I mean baby-sized. The show has brought in a six-month old for the current filming, according to this proud parent’s tweet.

#prouddad My little dude Wyatt is filming #GameOfThrones #got today. He is only 6months old. So proud of the little dude #superstar — steveisthemac (@steveisthemac) July 30, 2014

Several Game of Thrones scenes in the past have been filmed in the town of Moneyglass, Northern Ireland, including portions of the Red Wedding. Currently, a new set is taking shape in Moneyglass on a site previously used by the show.

@Fionagun shared this photo of a set in progress out at the Linen Mill Studios. 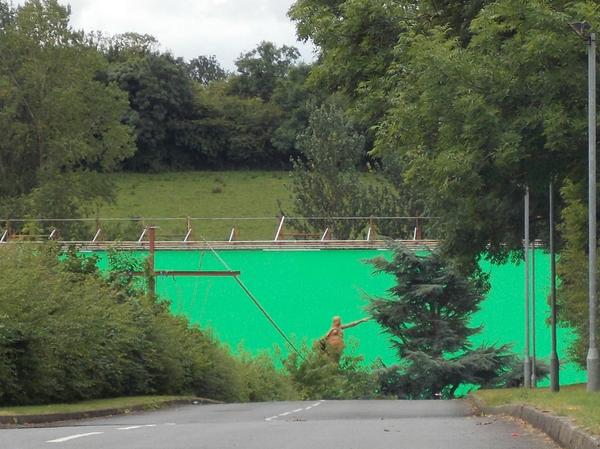 Sue the Fury says: There will be more sightings before the day is out, at this rate. Do you think the show is needing another baby stand-in for Gilly’s boy or for some other purpose? Any other sightings to report, readers?