Soon after Game of Thrones finally landed in Seville to shoot Dragonpit scenes in Itálica, more than a dozen cast members showed up. As more of them appeared, the ones who did not, the ones who were absent, made themselves more and more conspicuous—and few absentees were felt more than Kit Harington … until today, when he showed up!

Minutes ago, Lady Stark on Twitter was there for Kit Harington’s arrival in Seville:

If you’re not keeping tabs, you may need a reminder of who has been sighted in Seville. Without any confirmation of the contrary, the following will assume that every cast member in the city is there for the shoot and not for a documentary, a wrap party, or just to confuse us (even though these popular theories are all possible.) That said, the Dragonpit scenes would include Jon Snow, Bran Stark, Sansa Stark, Arya Stark, Davos Seaworth, Brienne of Tarth, Sam Tarly, Gendry, Robin Arryn, Varys, Jorah Mormont, Yara Greyjoy, Grey Worm (these last two were sighted only recently), Tyrion Lannister, Jaime Lannister, Cersei Lannister, the Night King, and (the faces of) Jaqen H’ghar and the Waif.

That’s quite a party! Nevertheless, there’s an obvious absence here: Daenerys Targaryen! Emilia Clarke is still promoting her new Star Wars film, so maybe the character is supposed to be there and will be added into these scenes via film magic. Or maybe not.

Other notable absences are perhaps even more intriguing, especially given that many of their companions are there: Dany’s retinue is all accounted for… except for Missandei; and, though Cersei is present, her brains and brawn —Qyburn and the Mountain— are not. Euron is also curiously missing. The same can be said of the likes of Theon Greyjoy, Tormund, Bronn, Podrick, and many others. If our best guess is correct and the finale is being filmed in Itálica, we must accept at least some of these characters may be dead. 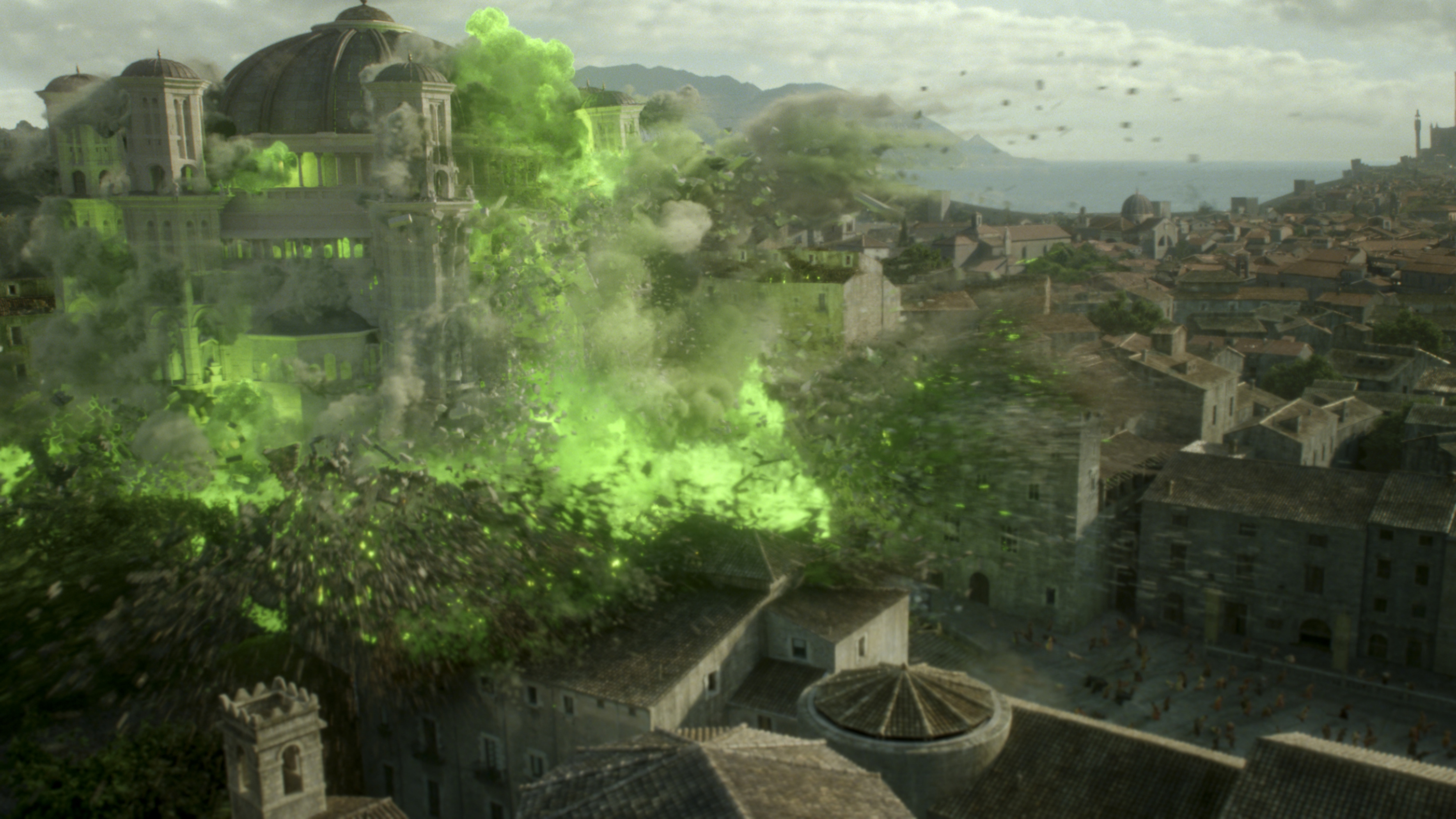 In more cheerful news, let’s discuss the ravaging of the highly populated capital of the Seven Kingdoms. A few days ago we reported on the King’s Landing set being modified so as to appear breached. Back then, we could only blindly speculate on what is it that will bring down the city walls but … it’s dragons, isn’t it? Yes, it’s probably dragons.

Los Siete Reinos revealed that the local Belfast businesses near the Titanic Quarter where the King’s Landing set stands received a warning last week: on the early hours of Friday the 11th, controlled explosions would be employed on set. Next day, the city walls were being reconstructed as if to appear damaged, which is probably not a coincidence.

Also, A Red Priestess came through again and showed apparent fire damage has been added to the ruined towers, illuminating us further on the cause of their destruction:

She also directed us, via Reddit, to a giant fire next to the walls, facing the green screen. The following is our stabilized, zoomed-in and widescreened version of the video:

So, yes. It’s probably dragons. Healthy and alive dragons like Drogon and Rhaegal, or creepy undead dragons like Viserion? That we don’t know, and we probably won’t until we watch the show next year. Still, until then, speculation is half the fun, isn’t it?