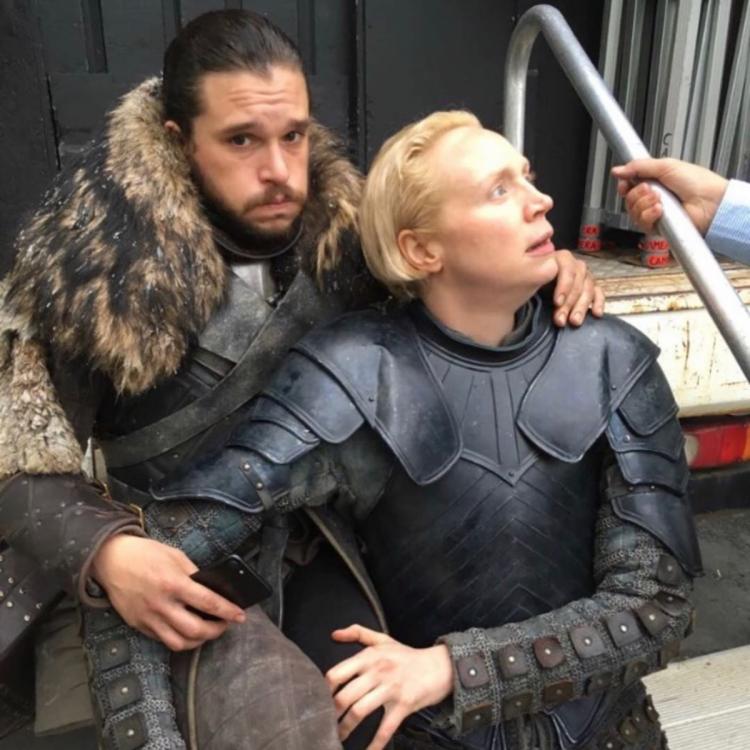 As we gear up for winter (whether its winds are coming or not), the Game of Thrones cast is busy as ever, attending cons, as is so common for actors enmeshed in popular culture these days. As such, Kit Harington (Jon Snow) and Gwendoline Christie (Brienne of Tarth) attended ACE Comic Con this past weekend. And in their spotlight interviews, they were asked about GOT, as well as some of their other characters and upcoming work. While most of us (myself included) were unable to be there, thankfully some lovely camera folk recorded them for us. What did they say? Let’s dive in and take a peek…

Gwen gave a fantastic answer when she was asked how she balanced being Ser Brienne of Tarth and Captain Phasma (Star Wars), given they are such dramatic roles, when she is so funny? Her answer, predictably, is full of Gwen’s trademark insight:

There was no balancing to be done. Parts like Brienne and Phasma mean something – to me and to popular culture – That’s why I persevere in this job I’m lucky enough to do; they communicate a message. These characters spoke to me in a very profound way. And because of what we’ve been fed from the mainstream media, which has been from a very patriarchal perspective, we hadn’t had a lot of diversity or variety of women’s stories, and so I found that these characters spoke to me on many different levels, and I just wanted to communicate them and what it said to me. That’s about joy to me. That’s my absolute state of bliss – to be in service of an idea greater than myself, whether it’s changing perspectives of the way women look or being a badass with a sword. But that’s what I love, so that’s joy and humor to me. That’s my interest – it tends to lie in drama, and finding the comedy in the tragedy…

She is so full of wisdom, and I just love listening to her speak. You could hear and see the audience hanging on her every word. More importantly, she is extremely passionate about diversity and opportunity, and has this to say about the future of pop culture, and why Brienne is so influential: “The Internet has given people a forum to make their voices heard. People want to see themselves represented in the stories that are told. We need to see a realistic depiction of our world, and people can only realistically respond to what we’re given.”

Then, of course, because I know you’re all askin’, she did address the direwolf in the room. What are her thoughts on Brienne’s season 8 arc, and does Gwendoline feel that it did the character justice?

I have to say that I did. I loved that Brienne got to have her first sexual experience! *screams ‘sexual experience’ repeatedly while the audience chants* I loved that she elected to have that sexual experience. It was her choice. I love that her storyline for the final season wasn’t defined by that. She gets the promotion she always wanted. And, she was alive. I loved that about her. It didn’t tear her down. It didn’t live on. It didn’t demolish her. It didn’t break her down. She went through a human experience and went through the wide variety of human emotions that we can have that befits us being on the Earth, but she achieves her dreams and becomes Lord Commander of the Kingsguard. She was made a knight on her own terms. So yes, I was delighted.

Sorry to all the detractors, but I’m very glad to hear her affirm her positive reception. I loved her arc too, and have been defensive of it for quite some time, so I’m glad to know that I’m on #TeamGwen.

Meanwhile, over at the Wall, Kit Harington had a bit to say as well…

One of the coolest things Kit was asked was how 10 years of living inside a character has affected him, and how much of Jon he carries with him every day.

I always felt with Jon that one of the struggles is that I was always playing someone who is a better person than me. He’s good to his core. He’s loyal, he’s brave, he’s honest, he’s truthful to his very core. Playing a character like that for 10 years of your life is intimidating…playing someone who is the very essence of good and brave. So, I can only hope that some of him does live on in me, or that I learned something from him. I loved him dearly as a person and I really enjoyed playing him. When meeting fans or meeting people in the street, [I see] that Jon was a very beloved character…whereas some of my friends have it a bit harder like Jack Gleeson, playing Joffrey, or Alfie [Allen] playing Theon. I had it easy because people followed Jon – they liked him.

That last bit about the difference between Kit’s street experience and others is both funny and scary. I’ve run into several GOT celebrities in the streets (Joseph Mawle and John Bradley) and they were lovely, but I don’t understand how some people can’t disassociate the actors from the characters they portray. Anyway, when pressed about what items he took from set, Kit notes that he wasn’t allowed to take Longclaw home, so he contacted an armorer to get his own copy made! Additionally, he, um…ended up with some other presents: “The one thing I managed to grab were his gloves and the van braces, the bit that goes around the glove. I got a life-size statue of Jon Snow as well from the (season 8) promo where we all come upon our statues of ourselves in the crypts. They asked me, Maisie [Williams], and Sophie [Turner] if we wanted them and I was the only one who said yes. It’s in my garden shed.”

For more on Gwen’s journey through hardship, perseverance, and the (slowly) changing face of representation in the industry, or more from Kit regarding pranks, his favorite Harry Potter books/movies, and what kind of ‘dark comedy’ he wants to make about himself, watch the interviews!