House Targaryen of Valyria and Westeros | Watchers on the Wall | A Game of Thrones Community for Breaking News, Casting, and Commentary 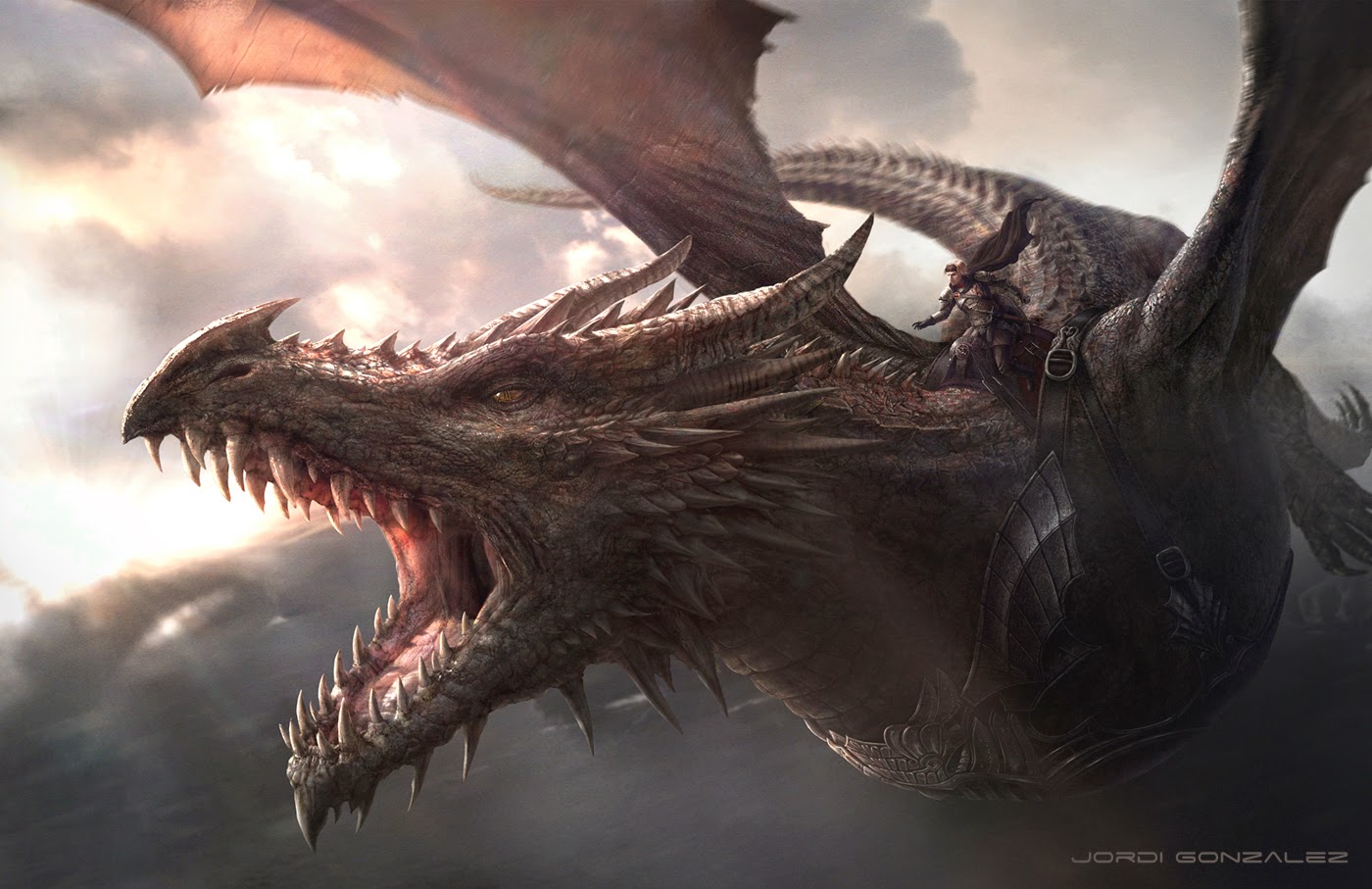 Aegon riding Balerion, in The World of Ice and Fire. Artwork by Jordi Gonzalez

Fire and blood, the blood of Old Valyria, the three heads of the dragon. In Westeros, the Targaryens are the pinnacle of dynasties; they made kings surrender their ancient crowns or die screaming in dragonfire. Aegon the Conqueror made a mockery of even the most powerful king, Harren the Black, ending Harren and his line in one day from atop Balerion the Black Dread. That is who they are now; but back in their old neighborhood of Valyria, the Targaryens were not the kingdom-conquering badasses we know now. 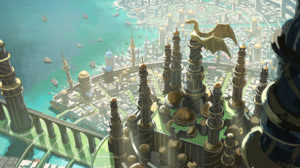 The Targaryens are from the now obliterated Valyrian Freehold in Southern Essos. Before the Doom, the Freehold was the absolute power in the known world. From their peninsula, the Valyrians flew their dragons wherever they pleased and brought ancient civilizations to their knees, one after another. One of their first victims was the Ghiscari Empire.

When Daenerys conquered Slaver’s Bay, she was actually completing the millennia-long war of the Valyrians against the Ghiscari. Before Valyria, the Ghiscari Empire ruled over much of Western Essos using their Lockstep Legions (the forerunners of the Unsullied) until the Valyrians came. The dragonlords broke the Ghiscari, utterly destroying their capital city of Ghis and leaving only the three cities of what became known as Slaver’s Bay intact. In a further brutal act, they sowed the lands of the Ghiscari with salt so that they would never grow crops again. This caused the remaining cities to rely heavily on their only remaining industry, slavery. And despite the Valyrian Freehold’s name, their primary import was slaves to work the mines in their homeland. The nightmare Dany walks into in Slaver’s Bay was one made from the greed of her ancestors. 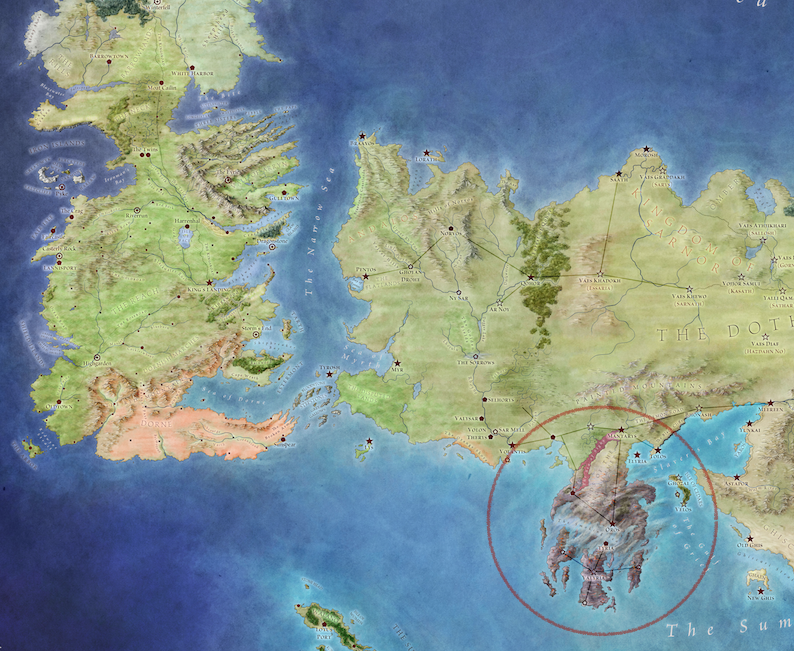 Another of the Valyrian Freehold’s conquests was the destruction of the Rhoynar. You may remember that name from the titles of the King of Westeros. They rule over the Andals, First Men, and Rhoynar. The Rhoynar came from Western Essos along the Rhoyne River, again, until the Valyrians came for them. The Rhoynar put up a centuries long fight but eventually they lost to the dragonlords and princess Nymeria put her people on 1000 ships and sailed for Westeros. There they conquered most of Dorne and joined House Martell in a permanent partnership becoming Nymeros-Martell. A huge reason Dorne resisted the Targaryens so fiercely is the painful memory of the original Valyrian conquest which left an entire civilization in ruins. 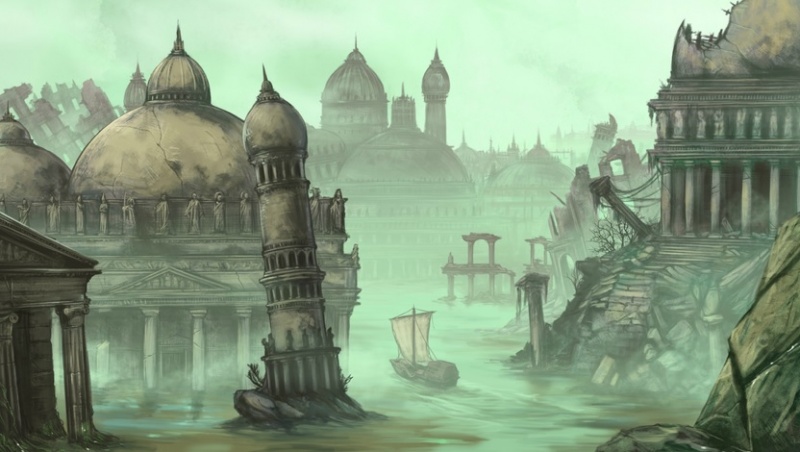 The Sorrows of the Rhonyar by Dmitri Bielak – Fantasy Flight Games

The rest of the world trembled when Valyria turned their eyes toward them. Although you’d expect a Roman style emperor, the Freehold itself has an unusual structure for governance. Rather than a central ruler or single locus of power, the Freehold was composed of all freeborn landholders. Almost sounds democratic right? That would be wrong. It was instead an oligarchy masquerading as a democracy. In practice the Freehold was dominated by the forty most powerful houses in Valyria. Ah, here you must be thinking, this is where the Targaryens come in! Given their domination of all comers in Westeros, they must’ve been a key feature of the Freehold. A integral piece of the great Valyrian empire, the three-headed Targaryen dragon directing legions across the world.

The truth though is far from expectation. Of the forty families who ruled the Freehold, the Targaryens are the absolute last of the families in terms of power. In the context of Westeros, rather than the Starks or Lannisters or Baratheons, they would be closer in power to House Swyft of Cornfield or House Tallhart of Torrhen’s Square. If the show took place in pre-Doom Valyria, the Targaryens would be a house you struggled to remember the name of because they were mentioned only once in passing. The Freehold barely cared about the Targaryens. And yet, even the lowest of the Freehold brought the kingdoms of Westeros to their knees with ease.

In a way this displays a reason the Valyrians never bothered conquering Westeros. It was, in their eyes, a backwater group of savages not worth the effort of ruling. From the Valyrian perspective, they spent centuries systematically destroying the Rhoynar and Ghiscari with their full might of legions and enough dragons that they blotted out the sun. The lowly Targaryens conquered all of Westeros with only three dragons and barely an army. It’s comical how easily the Seven Kingdoms fell against a sliver of Valyrian power. This also informs why the Targaryens are the only survivors of the Doom among the members of the Freehold. They had much less to lose. 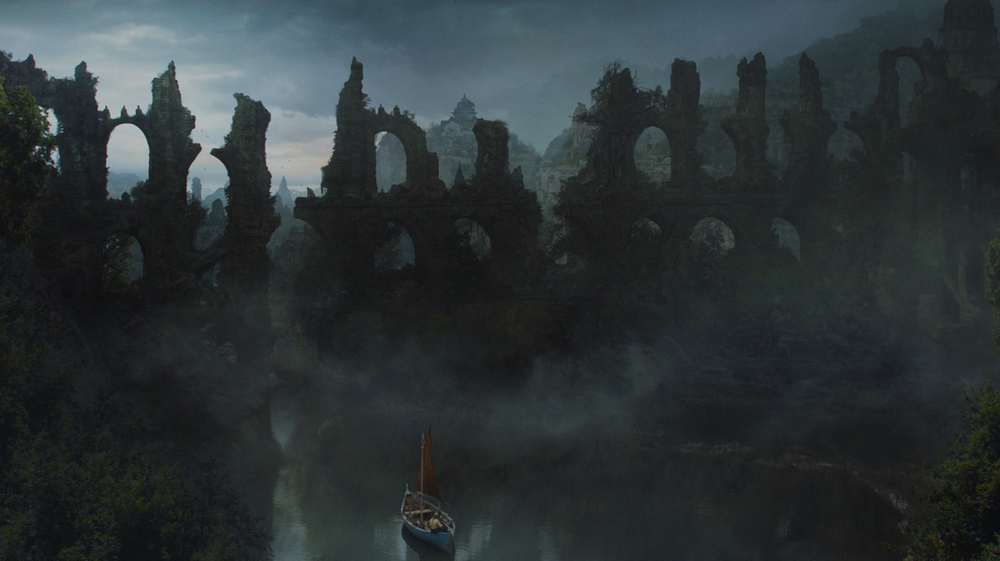 The ruins of Valyria, in season 5, episode 5

The bell tolled for Valyria and it is called the Doom. The peninsula of Valyria had fourteen volcanoes throughout it, known as the Fourteen Flames, that their imported slaves constantly tended and mined. And in one day, all fourteen volcanoes exploded and destroyed Valyria forever. The Targaryens were the only ones who abandoned the Freehold and escaped the Doom, and they were ridiculed for it by the Freehold and especially for the reason they left: prophecy. 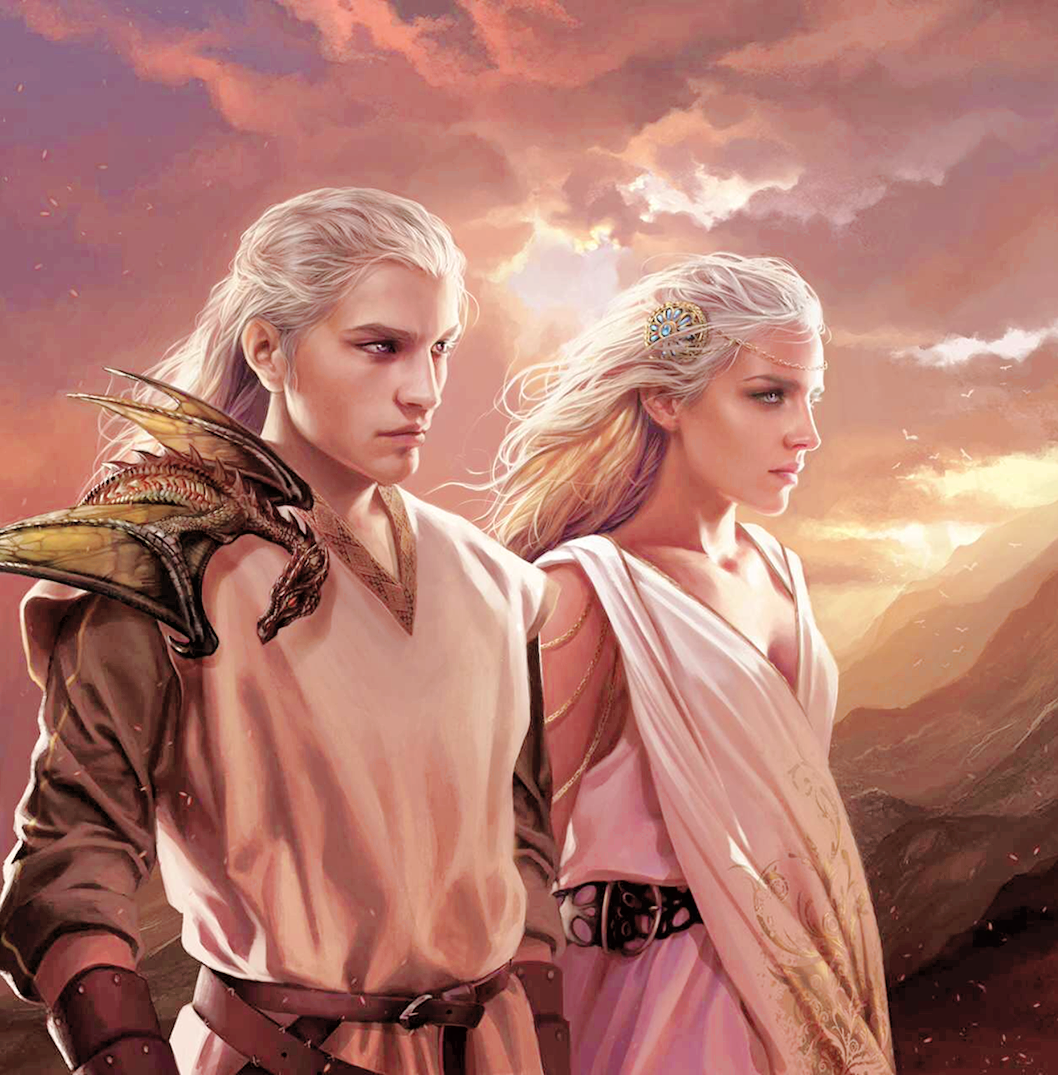 The Dragonlords of Valyria, by Magali Villeneuve

Aenar Targaryen, the head of house Targaryen and Dragonlord of the Freehold, had a precocious daughter name Daenys. Daenys had incredible dreams of the future, dreams that came true. Her best known dream though was that the Valyrian Freehold would end in one night. Somehow, likely through consistent dreams coming true, Daenys convinced her father Aenar that if the Targaryens did not flee Valyria they too would burn in the Fourteen Flames. Imagine being Aenar. You’re not the most powerful lord in the Freehold, but you are a part of it. You have dragons, wealth, influence, many slaves, and are on the inside of the greatest empire the world knows. And yet, your daughter is pleading with you to give it all up and set sail for that island of savages known as Westeros on the word of her dreams.

Aenar listened, and twelve years before the Doom he sold all his holding in the Freehold, packed up his house and dragons, and sailed for Westeros. Aenar the Exile he was laughingly called by the thirty-nine remaining Freehold families. The three-headed dragon became the laughing-stock of the empire. Aenar left with five dragons and only one, the young Balerion later known as the Black Dread, survived the trip. Aenar took the volcanic island Dragonstone, whether for the resemblance of his volcanic home of Valyria or Daenys’ visions it is unclear, and made it the new seat of his family. 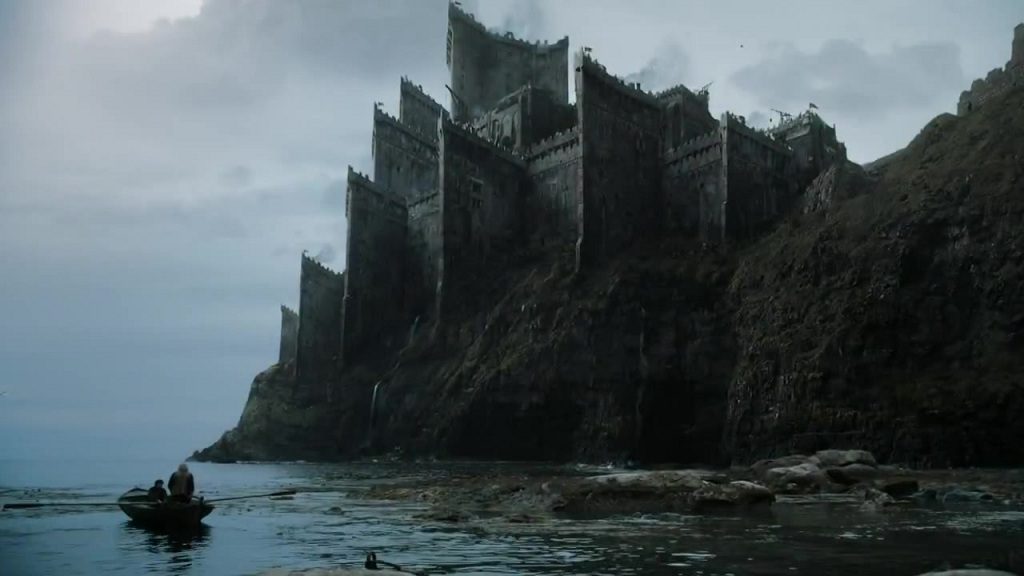 The bravery and absolute trust Aenar had in his daughter Daenys is incredible. The Starks lost their home of Winterfell early in the story and their children are obsessed with reclaiming it. The Lannister home of Casterly Rock has such meaning for the family that Tyrion thinks taking it will break Cersei’s power base. The Brackens and Blackwoods have been fighting for a thousand years over hills and mills and forests between their castles. And yet Aenar gave up everything they had for Westeros where the people worshipped odd shaped trees and rode horses into battle instead of dragons.

At this point you’d expect that from Daenys came Aegon the conqueror and his sisters Rhaenys and Visenya that took Westeros with fire and blood. And again, you’d be wrong. Aegon and his sisters wouldn’t land in Westeros for almost a century after Aenar settled his family on Dragonstone. There were five generations of Targaryens between Aenar the Exile and Aegon the Conqueror. In that time the two other dragons, Meraxes and Vhagar, were born and raised to adulthood. With three dragons and Aegon, Visenya, and Rhaenys as dragonriders as well as a century of knowledge of Westeros, the Aegon the Conqueror landed on the Blackwater rushes and changed Westeros forever.

The Freehold is also unusual in Planetos in that they don’t have a single religion. The Dragonlords viewed all religions as the opiates of the masses, and while they had gods they didn’t honor them much and considered themselves gods. The Valyrian approach was an odd mix of tolerance and indifference. They did what they liked but would prevent any one faith from becoming dominant in their empire. Aegon’s dragons Balerion, Meraxes, and Vhagar were named after their gods. Upon coming to Westeros, Aegon gave up what little faith they had and embraced the Faith of the Seven, although not all of it. The Targaryens would still practice incest and polygamy throughout their reigns as was allowed in Valyria. Although the Targaryen abandonment of the Valyrian religion could be tied to the Doom, if your gods let your homeland end in one day what’s the point in honoring them?

The Targaryens wisely have never returned to Valyria, post-Doom. Another Valyrian dragonlord was less wise. Aurion of Valyria was the only other dragonlord who survived the Doom. He declared himself the Emperor of Valyria and raised an army of 30,000 troops in the Essos city of Qohor. He mounted his dragon and led his army into the Doom. Neither Aurion, his dragon, or his 30,000 strong army was ever seen again.

This is a primary lesson of the Targaryen family, and one that Daenerys Targaryen thinks this phrase constantly throughout the books: 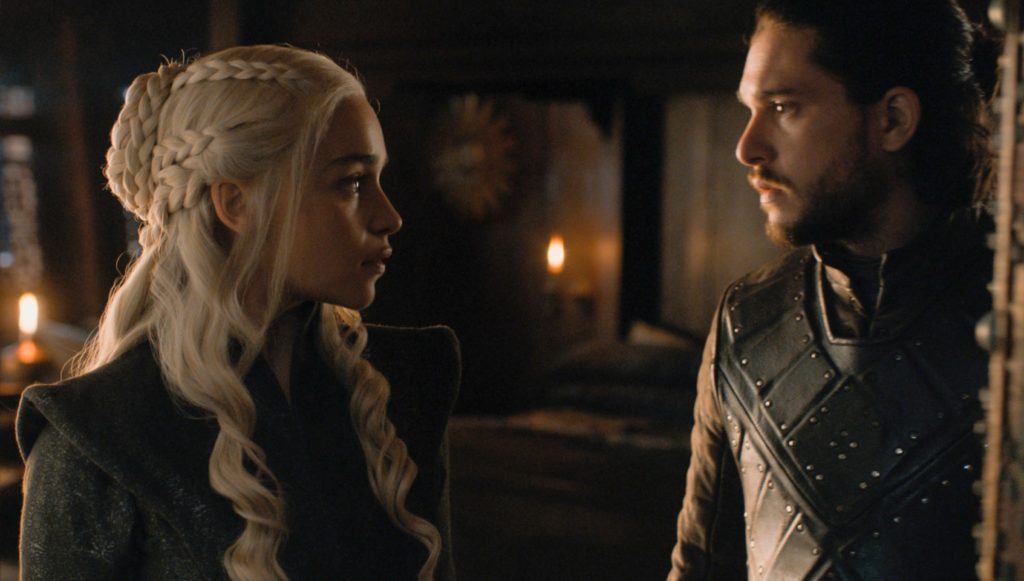 Valyria is gone, the Doom rules the Freehold now. The Targaryens look towards the future, not the past, and make their own way. The Valyrian Freehold clung to its power, cruelty, and subjugation for as long as they could and were consumed in the same fires they used against their enemies. There’s no way back for House Targaryen. Not to Valyria, not the Mad King and the Red Keep. As the Three-Eyed Raven, the bastard son of King Aegon IV, says to Bran:

“The past is already written. The ink is dry.”

The Targaryens listened to truth when they heard it and made the unthinkable, impossible choice so that they would live past the end of their homeland. When we look at the end of Game of Thrones with Daenerys and Aegon Targaryen (see: Jon Snow) remember that in the past, their family has done whatever it takes to survive. Lose their dragons, their home, their people, culture,  everything they have, if it means survival. No price is too high if it means the three-headed dragon still soars.