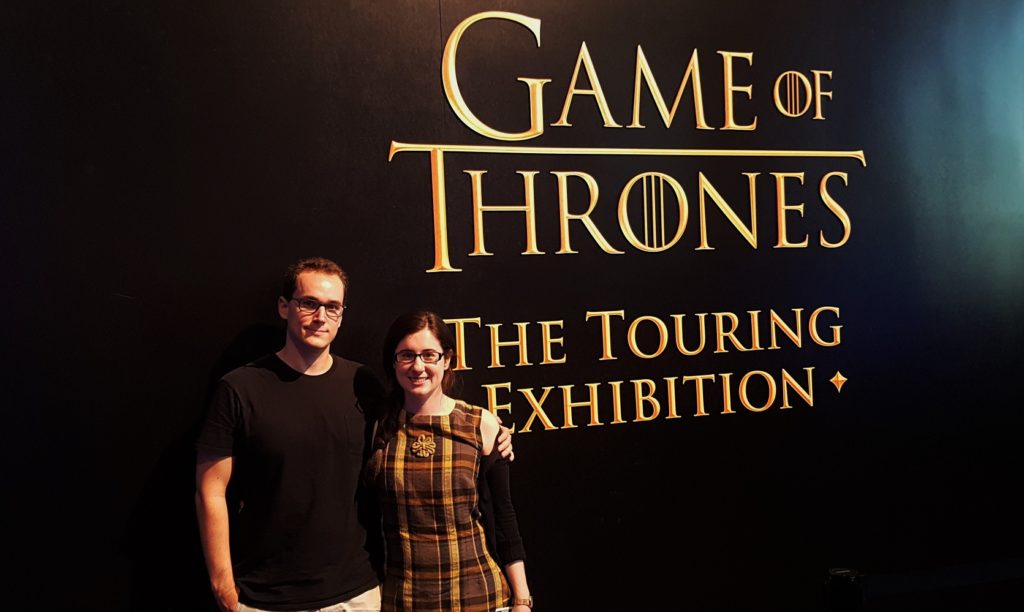 Last week I was lucky enough to be in Barcelona, which happens to be the inaugural city for the worldwide Game of Thrones Touring Exhibition. Many more cities will follow, but Barcelona will host it until January 7, so you still have time. Now, the question is whether the exhibition is actually worth it, and that’s the question I aim to answer today.

The medieval architecture of the Maritime Museum gives the event a very appropriate atmosphere, though sadly only those who get to go to the inaugural exhibition in Barcelona will experience it. Hopefully, other countries follow suit and organize this installation at an equally Game of Thrones-looking site! Inside, the promotion for the exhibition promised ten different settings “against backdrops that recall the majestic scenery of Westeros.” The set design should do most of the immersive work, and it often does, but when it falters the real medieval location picks up the mantle.

But that’s not the real focus here, is it? If you’re coming to this exhibition, it’s probably for the costumes and props, which are —just as advertised— compartimentalized by setting. Though some of these environments aren’t precisely stelllar, others are quite impressive, such as season seven’s Red Keep’s dungeons with a massive dragon head, a pretty good recreation of the gate through the Wall at Castle Black, and a pillar of the Hall of Faces at the House of Black and White. The skull and the pillar appeared to be taken directly from the set, or at least they were faithful recreations.

In a way, your experience of the exhibition may vary widely depending on your expectations. If you want to witness many of the award-winning costumes and props of the show in person, which is what the event is mostly advertised as, this is definitely the place for you. They look as jaw-dropping as they do on-screen, if not even more so, as you realize they’re actually real, hand-crafted art. You could just look at them for hours!

If you are intrigued by the “immersive environments, interactives, and multimedia content”, rest assured they’re present, though I was left aching for more, precisely because what little there was was so good. Some of the environments weren’t truly “immersive”, but the few interactive elements were worth it: the swords —Needle, Ice, and Longclaw— with which you could take a photo; the Iron Throne in which you could sit (though not the one in the King’s Landing throne room setting); and, finally, the thing that surprised me the most: the digital Hall of Faces. You could quite comfortably and quickly take a photo of your face and in seconds it would appear in the pillar.

These interactive elements were the most fun everyone seemed to have at the exhibition — not just me, my girlfriend and our friend, but the people around us as well, if I judged their reactions correctly. The excitement over holding Longclaw and seeing your own face in the Hall of Faces was palpable. Little else came close to that.

But I’m straying off-course again, because none of that was the actual focus of The Touring Exhibition — that would be the costumes and props. Yes, the costumes are as intricate and impressive as they appear on-screen. Please read our “Game of Threads” series by contributor Hogan if you really want to gain a new appreciation of them.

Personally, the props are the true highlight of the entire exhibition. You get to see the Bolton’s map of the North from season four up-close, made with human skin. Sansa’s incriminating letter to Robb from season one that got her into so much trouble in season seven is there as well. There is also a map table with the strategic house markers we saw in Stannis’s camp in season five, at Winterfell with the Boltons in season six, and at Dragonstone with Daenerys in season seven. All these props, which were kind of out of the spotlight in the exhibition, held my attention for more time than many costumes.

Oh, and Varys may still be a merman, but he’s bipedal … or bi-tailed? Definitive proof!

If it wasn’t clear, the exhibition is worth it. As long as you are aware, before paying the price (the gold one, let’s not get piratey), that the exhibition offers exactly what it says on the tin — nothing more, nothing less. Don’t expect high-tech interactive material but, if you are enamored as many of us are by the show’s costumes and props, which is what the exhibition promises most of all, absolutely go for it! Barcelona is only the first stop of the touring exhibition. After January 7, another city will host it, and then the next, and so on. The other locations all around the world will be announced in the coming months.