Details released for 'Game of Thrones: The Touring Exhibition' in Barcelona, and Ian Beattie reveals a surprising fact about Meryn Trant's demise | Watchers on the Wall | A Game of Thrones Community for Breaking News, Casting, and Commentary 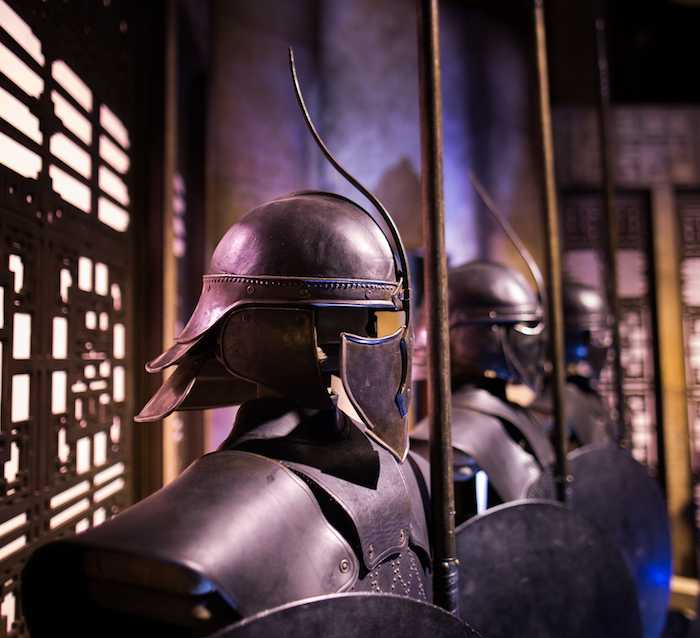 A line of Unsullied costumes is only one of many features of ‘Game of Thrones: The Touring Exhibition,’ which makes its global debut on October 28 in Barcelona.

There’s little else that fans of Game of Thrones love more than getting to peek behind the curtain at the ins and outs of the world’s most popular show – and those lucky enough to visit “Game of Thrones: The Touring Exhibition” can experience the most up-close-and-personal view of Thrones that you can get without actually being a part of the show. As we reported in September, the exhibit will make its global debut in Barcelona on October 28, and today we learned more detail about what it will include – and got a few tidbits from former cast member Ian Beattie (Meryn Trant) at an inauguration event for the exhibit.

The 10,000-square-foot interactive exhibit contains costumes, authentic props and more and guides attendees through 10 settings against backdrops that recall the majestic scenery of Westeros:

Visitors begin their experience with a pre-show that includes a montage of dramatic scenes from the show, culminating with the reveal of the Winter Forest, the formal start of the exhibition.

Maps and markers used by nobles to plot strategy and war remind visitors of the competing Houses and what has unfolded over the course of the story so far.

Featuring set decorations, props, and costumes from Joffrey Baratheon’s fateful wedding to Margaery Tyrell, this chamber features the wedding gown of Margaery, the wedding attire worn by Joffrey and his sword, Widow’s Wail, and the litter used to carry Joffrey throughout King’s Landing.

A replica of Jaime Lannister’s golden hand is featured in the King’s Landing room.

Setting 5: The Noble Houses of Westeros

Visitors can explore the noble houses of Westeros, with a multitude of props, costumes, and weapons used by House Bolton, House Baratheon, House Greyjoy, and House Martell. Highlights include costumes worn by Stannis Baratheon and the red priestess Melisandre, the silk costume worn by Ellaria Sand, the leather armor worn by Oberyn Martell, and Shireen Baratheon’s toy stag, carved for her by Davos Seaworth. 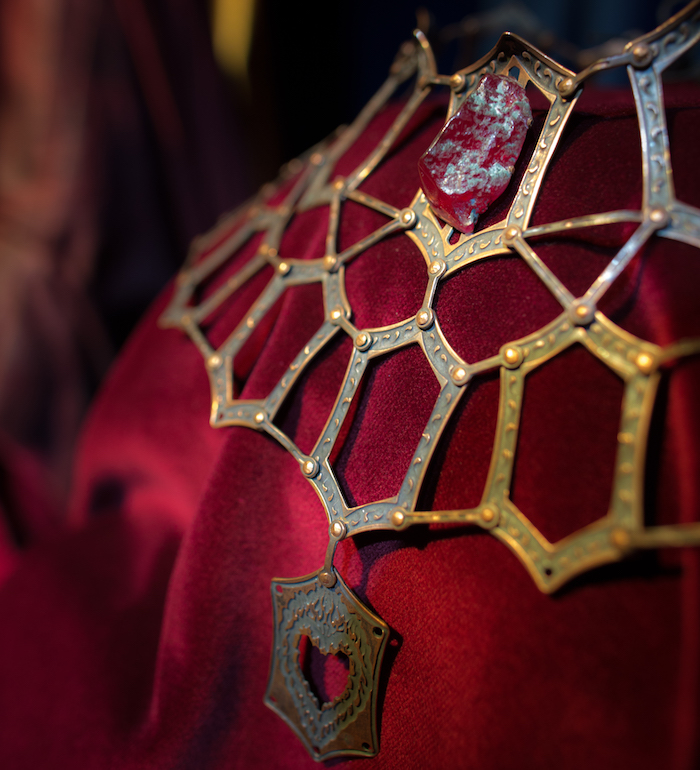 An up-close view of Melisandre’s necklace, on display in the Noble House of Westeros room.

The giant skull of an ancient dragon guards the entrance into Essos, where the Mother of Dragons and her attendants and armies are showcased. This chamber includes costumes worn by Daenerys Targaryen and Missandei, armor worn by the Unsullied warriors, dragon eggs given as a wedding gift to Daenerys, and Khal Drogo’s arakh. 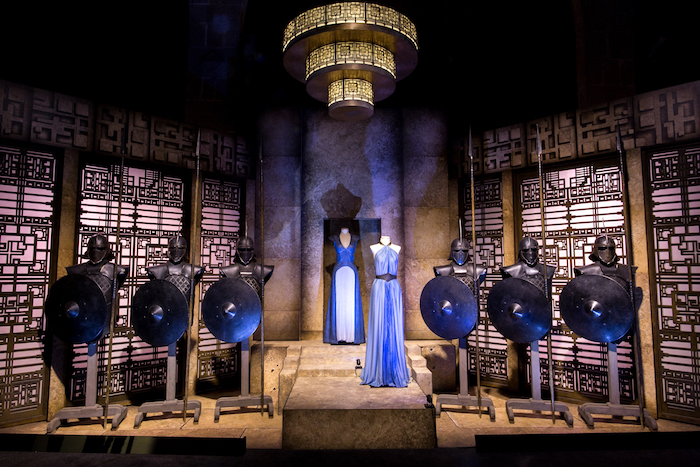 Costumes worn by Daenerys and Missandei, as well as Unsullied armor, are on view in the Targaryen room.

Setting 7: The House of Black and White

This setting is the Hall of Faces, lined with the preserved faces of the dead, ready to be worn by the Faceless Men. Visitors can see costumes worn by Arya Stark and Jaqen H’ghar, and features a unique photo opportunity that allows visitors to add their face to the others preserved in the Hall of Faces.

Setting 8: The Wall and Castle Black

Visitors can visit the ancient stronghold of the Night’s Watch, Castle Black, where they can explore costumes worn by Jon Snow and Alliser Thorne, Jon’s sword Longclaw, and an interactive photo feature that captures them scaling the Wall. 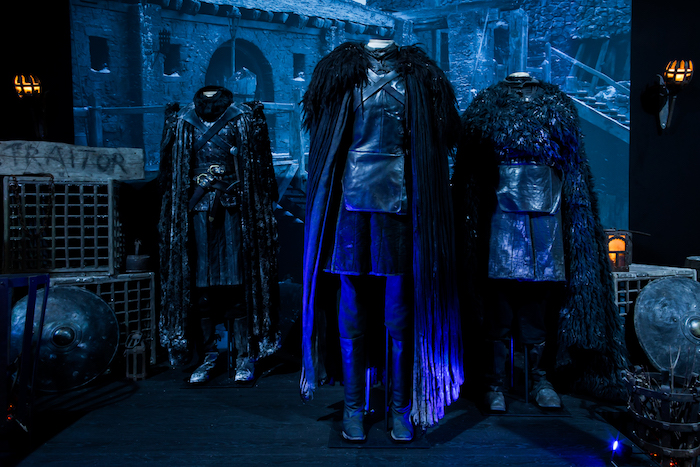 Visitors can see costumes from Jon Snow and Alliser Thorne in the Castle Black room.

Setting 9: Beyond the Wall

In the frozen lands beyond the Wall, visitors can view costumes worn by Bran Stark and the costume and harness worn by Hodor, the costume worn by the Night King, wildling daggers, White Walkers’ swords and spears, and dragonglass daggers.

The final setting of the tour features the structured leather dress worn by Cersei Lannister when she took the throne, the costume armor worn by Joffrey Baratheon during the Battle of the Blackwater, and — most exciting of all — an exact replica of the Iron Throne.

While the exhibit officially opens to the public on Saturday, an inauguration event was held on October 25, which was attended by Ian Beattie, who played the ill-fated Kingsguard Ser Meryn Trant, and Tom Wlaschiha, also known as the mysterious Jaquen H’ghar. Los Siete Reinos interviewed the two, and while the Wlaschiha story won’t be available until tomorrow, the website released several quotes from Beattie about his time on the show.

“There is an interesting dichotomy,” Beattie said. “The knights of the Kingsguard are supposed to represent courage, chivalry, and many other values; Meryn has none of them. It’s a reflection of how bad King’s Landing is doing, how bad the system’s doing. It’s a great detail the ‘Game of Thrones’ creators are very much aware of.”

Beattie also touched on Trant’s death at Arya’s hands in season five, saying that “one of the points of that scene isn’t just ending this pathetic guy, but that while we’re cheering for his death we begin to worry about Arya’s future. It’s one of those twists; yeah, he deserves it, but then you it makes you think.”

In the interview, Beattie also revealed a surprising bit of information about Trant’s demise.

“I was on set in season two and D&D told me they had plans for my death in the future. I thought I was going to die that very season, but Benioff and Weiss told me: ‘You’re going to die later. Arya’s going to kill you.’ I told nobody for three years,” he said.