Game of Thrones Season 8 Writing Line-up Confirmed and a Season 7 Cameo Revealed at SXSW! | Watchers on the Wall | A Game of Thrones Community for Breaking News, Casting, and Commentary 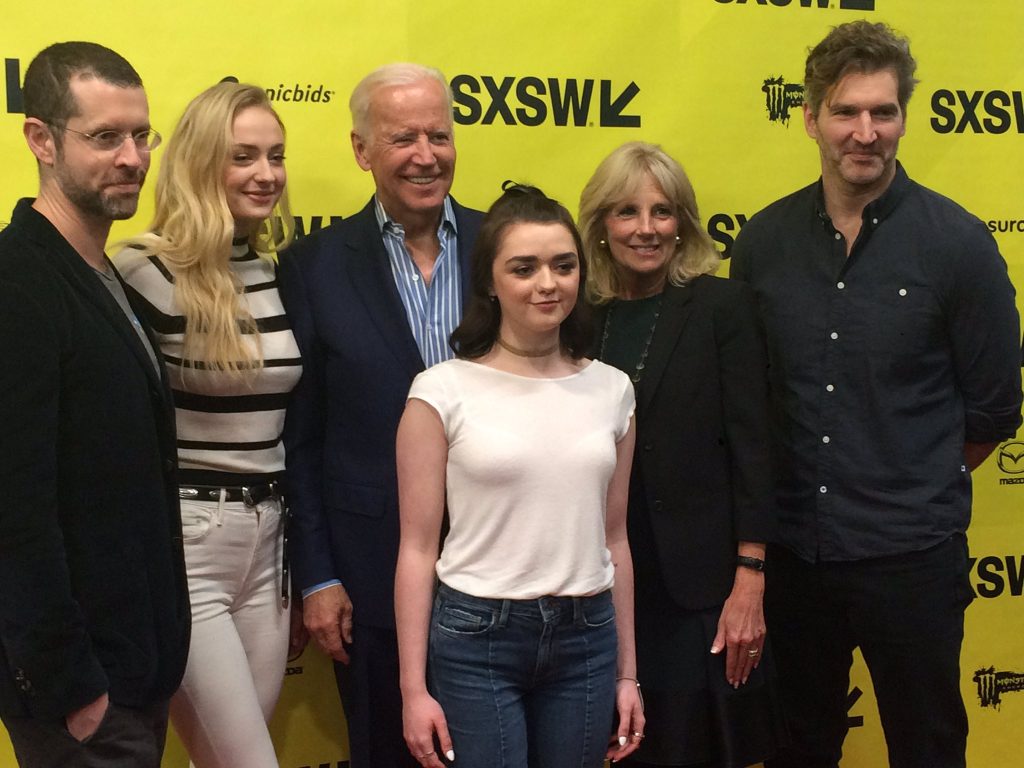 “The cast and creators of #GameofThrones meet @JoeBiden backstage before their panel at #SXSW” Photo: Twitter/GameofThrones

The Game of Thrones panel at SXSW took place this afternoon, with stars Maisie Williams and Sophie Turner joining showrunners David Benioff and D.B. Weiss for a talk.

We weren’t able to be there, but luckily many fans and journalists who were in attendance shared information from the panel online with some exciting tidbits coming out of the session.

The first piece of notable news to come out of SXSW is the announcement of the season 8 writing line-up for Game of Thrones.

Episode 1: Dave Hill
Episode 2: Bryan Cogman
The other 4: Weiss and Benioff#SXSW #GoT

With Dave Hill writing episode 1, Bryan Cogman taking episode 2, and Benioff and Weiss taking the other four episodes, that confirms a total of six episodes for season 8. Viewers aren’t going to love having even less GoT next year!

The next major news: Benioff reportedly told the SXSW audience that musician Ed Sheeran will be in season 7!

Ed Sheeran will make an appearance in S7, according to Benioff. Was invited as a surprise for Maisie. #SXSW #GameOfThrones

The showrunners and stars covered a variety of subjects at the panel, including the possibility of an undead dragon:

“Is it possible to have a dragon white walker?”

And Maisie’s joke (?) about Sophie/Sansa being dead, due to hair color:

And the inevitable spin-off discussion, which Benioff confirms:

Benioff says that HBO will probably do a spin-off show, but that he "looks forward to watching." #SXSW #GameOfThrones

Other SXSW highlights today: Turner and Williams popped over to the Game of Thrones Escape Room to surprise fans!

The actresses also found the time to record Carpool Karaoke for Apple Music:

Check out A Storm of Spoilers’ Twitter feed for a complete play-by-play of the SXSW panel, filled with fun trivia!