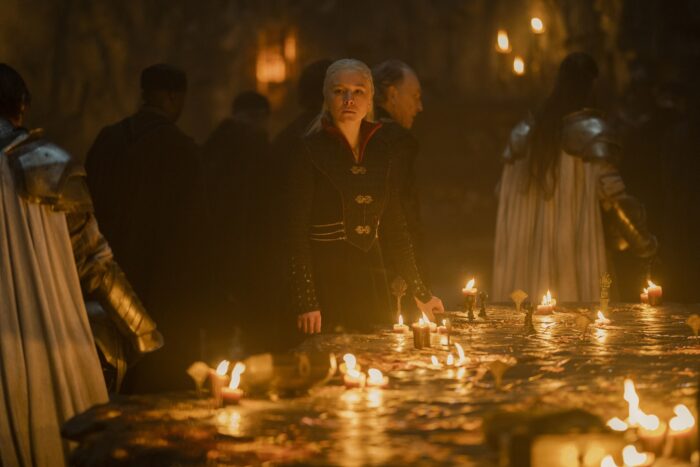 All good things must come to an end, and the first season of House of the Dragon is no exception. In the finale, “The Black Queen,” Team Rhaenyra learns of the death of Viserys and Aegon’s coronation…and then the hits just keep on coming. It’s time to settle in for the long wait for season two, but first let’s fly like Vhagar is on our tail (too soon?) straight into today’s interviews and videos!

Matt Smith describes his character to The LA Times, saying whether Daemon is a sociopath or lovable rogue “depends on what side of the bed he gets out on. I think he’s just an agent of chaos in many respects…I was trying not to be too black and white about him.” He adds, “I think he has a sense of duty to his family, weirdly. I think he’d lie on his sword for his brother or Rhaenyra. He’s got a weird moral compass — perverse and strange, but nevertheless, there is a set of laws that he’s guided by. Where he feels alive is in that lane of chaos and anxiety and madness. He lives on a knife’s edge, all the time.”

Speaking of Rhaenyra, what does Smith think attracts Daemon to her? “There is a deep but consistent pull towards one another for a whole host of reasons. It’s never just one thing. It’s hard because you’re asking me to comment on the relationship, but actually, I don’t really think of it in those terms. You just do it and let other people decipher it. It’s about giving over to the audience and letting them pick what it is. We’re just the vehicles.”

“You can’t really have too much of an opinion on someone like Daemon because otherwise you’d never represent him with an even hand, because he does so much bad.” That may be so, but apparently it’s working for him. When asked why Daemon doesn’t seem to age, Smith remarks, “He’s always eating his greens. Gets lots of sleep. And doesn’t give a flying f—.” Good advice for us all.

Be sure to read the full article here. 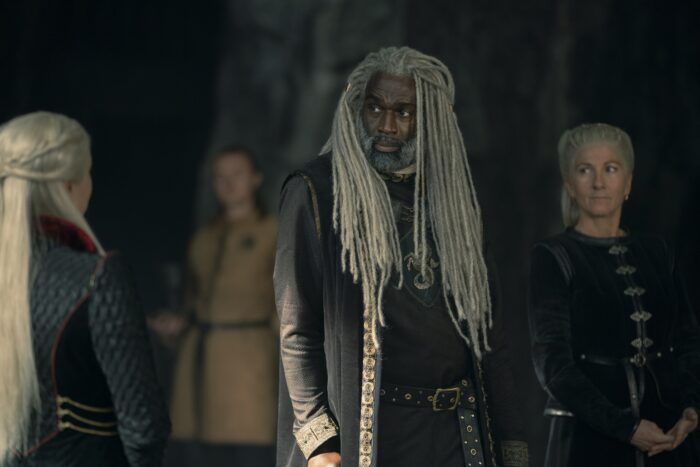 The finale saw the return of the Sea Snake, Corlys Velaryon. Steve Toussaint explains Corlys’ mindset after his absence to TV Line. Regarding his desire to stay out of the conflict and just live out their lives, he says, “I think, at the very moment he says it, he believes it. He believes I made these moves, they didn’t work out…but fundamentally I don’t think that’s who he is.” He continues, “I don’t think [Rhaenys] believes it of him, either…there’s a moment when she says something like, ‘No, no, wait. No. We can’t just… we’re too far in this. We have to follow this through and be part of this.’ There’s a slight moment in him that thinks, ‘Ah, OK! Cool!’ When he wakes up, he’s saying what he thinks she wants to hear, as opposed to how he really feels. And she surprises him.”

How does Toussaint envision their relationship evolving as they move forward? “I haven’t had those discussions yet with Ryan and the team…But then also, there is something about Rhaenys that those last three or four episodes have shown: There is a wildness under her that is unleashed. And it may be that for the first part of this first season, she is the restraining power within the couple. ‘We don’t do that, Corlys. We’re fine. We’re happy.’ The tables may turn and she may be the one that’s much more gung-ho and much more racing ahead to do stuff. It’s be interesting to see how that goes.”

Toussaint also shares his thoughts on why Corlys and Rhaenys back Rhaenyra. “When Viserys says ‘My heir will be Rhaenyra,’ much as Corlys may disagree with it, he is still a stickler for propriety. If the king has named his heir, then that’s who it is. It doesn’t matter how you feel…I believe that Corlys is like, ‘OK, that’s what has been said. That’s the law of the land, and we are honor-bound to support that.’ I think that’s what leads to his decision — along with his wife, obviously — in the final episode to say, ‘OK, we’ll ally with them.'”

Read the rest at TV Line.

Showrunner Ryan Condal makes the rounds at several outlets. First up, he tells Entertainment Weekly that it was always the intent to close the season with Luke’s death. “The thing that really pushes [the Targaryen conflict] over the edge, because it now involves people outside of just House Targaryen, is this act of war that happens over Storm’s End. It was fairly apparent right from the outset that was where [the endpoint] had to be.”

“The war is called the Dance of the Dragons, and this is the first dragon fight that has happened since Old Valyria,” Condal explains. “So the fact that is the first shot, to me, made it an almost necessary end point for the first season. Aegon seizes Rhaenyra’s crown and throne claim here, but now the stakes have gone up to this point. What’s going to happen next? It’s such a great precipice to leave everybody on going into the second season.”

Condal elaborates on the dragon sequence to Variety, saying, “Historians have told us that Aemond intended to kill Luke, but I don’t think any of them could purport to know what was going on in Aemond’s head the time. And I would also dispute the word ‘accident’ a bit. I mean, Aemond got on his giant dragon and chased his nephew on his much smaller dragon through the clouds screaming and yelling at him, incensing his dragon and starting a fight. He didn’t know how Arrax or Luke were going to respond, and it ended in tragedy.”

He adds, “I don’t think that was what Aemond intended when he threw his leg over the saddle, but he did a horrible, dangerous thing. That is the point: This is a war of many cuts that lead to a really, really bloody wound. It adds complexity and nuance to the character that’s potentially interesting. There’s lots of runway to go on with Aemond as a character and the story of the Dance. This is his first act as a dragon rider and a warrior and it’s gone very wrong. Now what happens as a result, and how does he respond?” It’s a shame we’ll have to wait so long to find out!

Check out both interviews here and here. 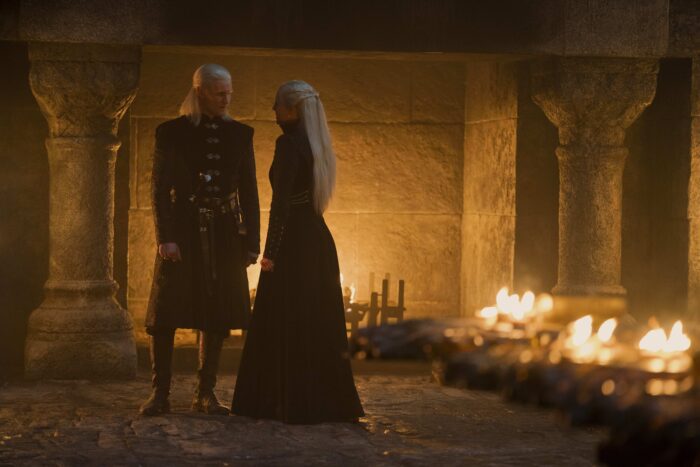 Over at Deadline, Condal remarks that it wasn’t the intent to bookend the season with dead Targaryen babies, but that “there’s a lot of beautiful symmetry in this season. It also began with a dragon ride and ended with a dragon ride. There’s a lot of symbolism to take from it. But yes, I think we realized in the domino-ing of events that happened in the final episode, one aspect was linking the horrific birth that goes terribly wrong in the pilot with another horrific birth that goes wrong in the finale. It’s mother and daughter…It’s a nice piece of symmetry that we did not see at the outset.”

He also address the somewhat controversial decision to have Daemon choke Rhaenyra. “That is an incredibly shocking scene and honestly, one of my favorite scenes of the finale that is beautifully performed by Emma [D’arcy] and Matt [Smith]…That primal danger is always lurking beneath the surface, and it just happened to come out in that moment. It was made very obvious to him that his brother never really regarded him as the true heir of the throne. That infuriates him. It’s the worst hurt that he could experience to learn that Viserys kept [the prophecy] from him, that he so willingly shared with Rhaenyra. It just breaks Daemon in that moment, and that’s how he reacts.” No one ever said Daemon is a good guy, folks.

Finally, Condal speaks with The New York Times about the reception the show has received. “I was surprised in a happy way about how quickly everybody embraced it. I really thought it was going to be more of a hill to climb because we were following the Beatles, and how do you do that? You don’t. You just try to do your own thing, and hope it connects with people. But I was shocked that people came right out the gate and accepted it, generally — this massive fandom, and tens of millions of people watching the show, and writing about it and talking about it.”

He goes on to discuss the divisive nature of the story he’s telling. “We live in a world where people need to pick sides. Particularly in America…we live in this incredibly charged political environment, where every decision that’s made has to have a blue or red flag over it, and there has to be a side taken. That’s slowly what this story becomes.” He adds, “Because it’s an escapist fantasy that has characters with dragons and swords and magic, I think there’s a real need for the audience to find a side within it, and find black hats and white hats, good guys and bad guys. They’re welcome to, but what you’ll find in watching the show is that the side you’re on is likely going to change as the story evolves.” It seems most people are firmly entrenched on Team Green or Team Black for now, but I suppose time will tell.

Go to Deadline and NYT for more.

In this week’s “Inside the Episode,” showrunners Ryan Condal and Miguel Sapochnik, director Greg Yaitanes, and cast members Emma D’Arcy, Steve Toussaint, Eve Best, and Ewan Mitchell discuss the Blacks’ reaction to the death of Viserys and the usurpation of Rhaenyra’s throne, and how the stage is set for war.