Game of Thrones Season 6 Episode 7 "The Broken Man" Written Recap Round-Up | Watchers on the Wall | A Game of Thrones Community for Breaking News, Casting, and Commentary 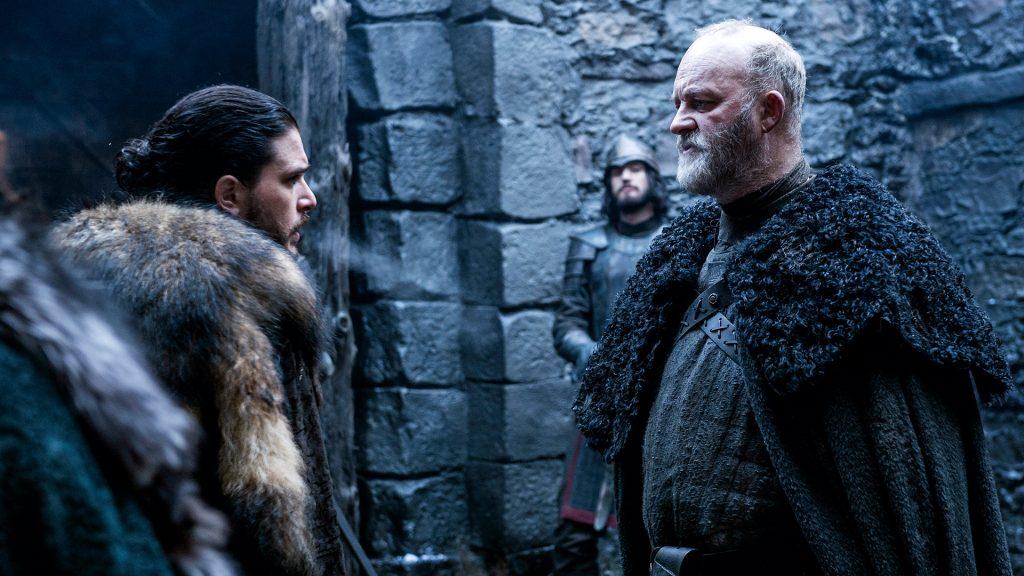 More characters returned this week in “The Broken Man” and even a few new faces popped in as season 6 of Game of Thrones is shaping up to be truly full of surprises.

Here atop The Wall, Sue (Sullied) is exuberant for the return of The Hound and guest actor Ian McShane (Brother Ray). She applauds the headstrong Lyanna Mormont and Yara’s revival of broken man Theon Greyjoy. Oz (Unsullied) also savors Ian McShane’s too-short performance and the anticipation created by the Blackfish and Jaime’s parley.

Myles McNutt, A.V. Club (Sullied) – McNutt basks in the return of Sandor Clegane as he joins the ranks of characters who’ve been reborn.

Alyssa Rosenberg, The Washington Post (Sullied) – Rosenberg reviews those both physically and emotionally damaged in “The Broken Man.”

Sean T. Collins, Rolling Stone – Also rejoicing for the return of The Hound, Collins calls the episode “well-paced and well-packed.”

Rob Bricken, io9 – Bricken states the episode had an “inevitable sense of things falling into place.”

Sarah Hughes, The Guardian (Sullied) – In line with Bricken, Hughes describes last night as a “well-paced, quieter episode that moved more pieces into place and presented us with a whole array of broken men.”

Neil Miller, Film School Rejects (Sullied) – After initially finding the episode “awful”, Miller steps back and analyzes how “The Broken Man” set us up for the conclusion of season 6.

David Crow, Den of Geek – Crow was beyond shocked declaring this episode “definitely and deftly executed its final movements on the chess board before qrugh hits the fan in the season’s last three episodes.”

Laura Hudson, Wired – Hudson takes a look at how the episode examined the consequences of violence through Theon Greyjoy and The Hound.

Alan Sepinwall, Hitfix – Sepinwall explores the meaning of “The Broken Man” and how it applies to each of our character’s inner turmoil.

Brandon Norwalk, A.V. Club (Unsullied) – Norwalk comments on the adversity often faced by the Starks and how their underdog nature will affect Arya.

Jen Chaney, Vulture – Chaney revels in the two big bomb drops this episode: the return of The Hound and the brutal stabbing of Arya Stark.

David Malitz, The Washington Post (Unsullied) – Malitz laments for the Stark’s turn of fortune this episode and reviews Margaery’s schemes in King’s Landing.

Laura Stone, Hey, Don’t Judge Me (Unsullied) – Stone revels in the return of The Hound (and episode guest Ian McShane) and straight loses it when Arya is stabbed.

David Rosenblatt, Squinty Over Analyzes Things (Sullied) – Rosenblatt delves into the themes of faith and devotion in his review of “The Broken Man.”

Michal Schick, Hypable (Sullied) – Schick explores the nature of our characters presented and tested this episode.

Check back later this week for Bex’s recap round-up with the video reviews for “The Broken Man.”

Another round of satisfied critics as season 6 sets up its conclusion! What are your thoughts? Let us know below!