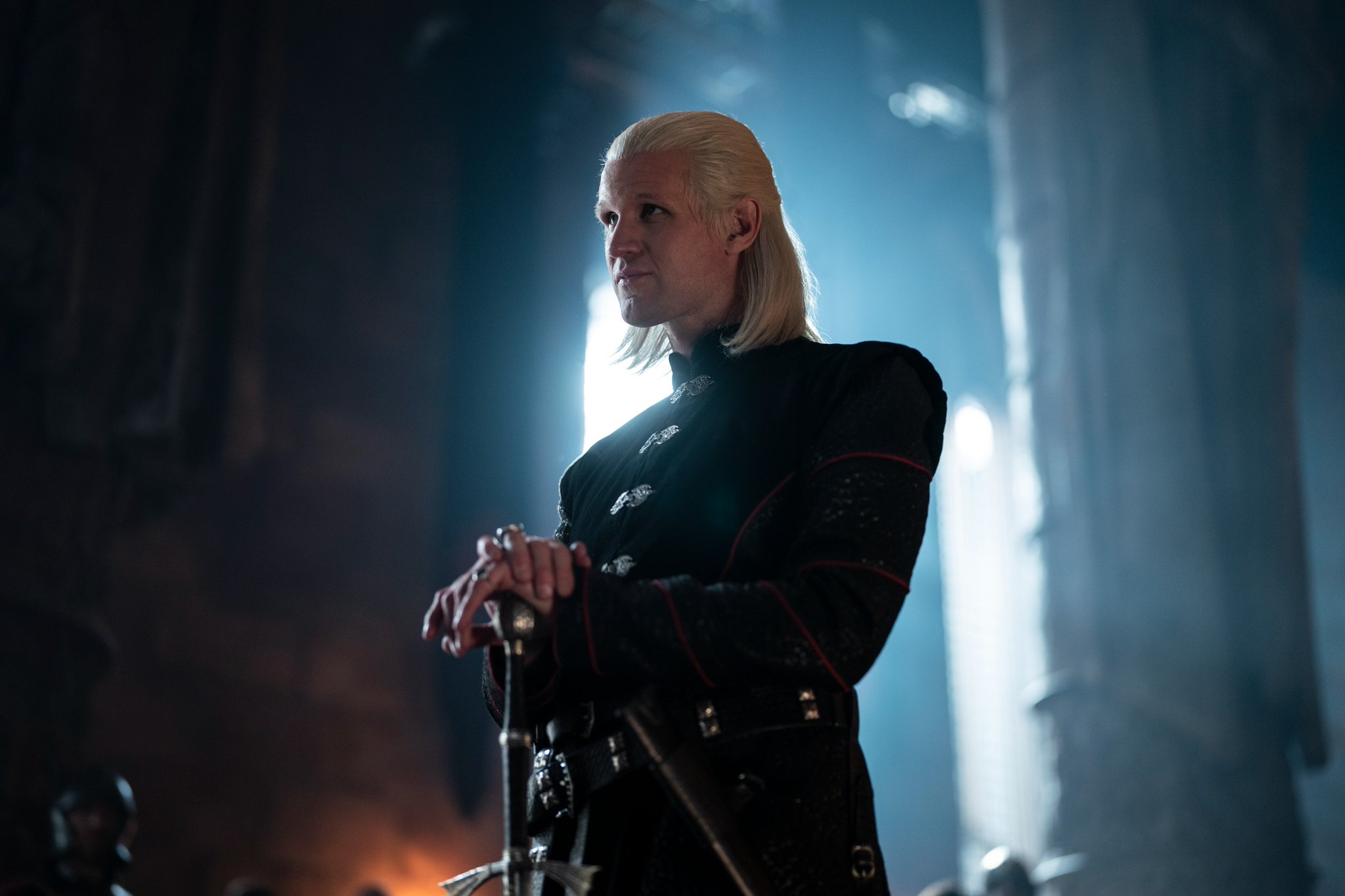 “I want patrols along the island’s perimeter,” declares the glowering Daemon, clad in all black with long, silver-blond hair. “Conscript the dragon riders, they’re capable fighters … we have Syrax, Caraxes and Tyraxes and …”

Smith, pauses. What’s the name of the fourth dragon again?

So begins The Hollywood Reporter‘s Inside ‘House of the Dragon’ Part 1: The Battle to Replace ‘Game of Thrones’, a detailed peek inside the making of House of the Dragon, part 1 of a two-day piece. Today’s article takes us inside the long creation of the new Targaryen-centered show, with fresh insight into the development and troubles behind the other spinoffs. Here are just a few of the highlights!

“I’ve been a fan of these books for 20 years,” Condal explains. “I was a fan of Game of Thrones — I watched the pilot the night it aired on HBO and every episode after. You can’t follow Thrones, it’s The Beatles. I’m setting out as a fan to make the thing I want to see, and I’m happy with what we’ve achieved. The Targaryens are like the Jedi in Star Wars, where you heard about this time when they were plentiful and powerful and always wanted to see that. And now you get to.”

The piece delves into the history of the spinoff pitches themselves, an interesting topic since fans are so often heated about their favorite Westeros area not being chosen for a series.

THR reports that George R.R. Martin initially pitched two ideas: a spinoff based on the Dunk and Egg novellas, and another based on the Dance of the Dragons, the Targaryen civil war. Martin says, “Dance had all the intrigue, competition for the Iron Throne, murders, duels, big battles, 20 dragons — all of that stuff.”

HBO actually declined Dunk and Egg at that time (obviously they changed their minds later) and put together a passel of spinoff concepts, with five going into some level of development as we all learned later. Some we know about but some are new, such as the one about “Aegon’s conquest of Westeros and penned by Rand Ravich and Far Shariat,” according to THR. As for the take on the Dance with Dragons, they report that the network actually tried Westworld‘s Carly Wray before having GoT‘s Bryan Cogman take a crack at it.

THR says, “Insiders say his take on Dance was good” but as we know, HBO didn’t go with Cogman’s version of the Dance. So the network went with something totally different, Bloodmoon aka The Long Night, with Jane Goldman as showrunner.

Condal reportedly says, “The desire at HBO was to not just offer up a sequel that’s about the war for the throne. They wanted to do something so totally different that it would blow everybody’s minds. I think that’s why they went with The Long Night instead.”

“Bloodmoon was a very difficult assignment,” Martin tell THR. “We’re dealing with a much more primitive people. There were no dragons yet. A lot of the pilot revolved around a wedding of a Southern house to a Northern house and it got into the whole history of the White Walkers.”

Apparently not even GRRM has ever seen the full result of the Bloodmoon/Long Night pilot.

As for the HOTD showrunners, while Miguel Sapochnik is a familiar entity as a director for GoT, Ryan Condal is newer face for a lot of GoT fans. He calls himself a “superfan” of Martin’s books in the interview. Determined to get the story made, Martin approached Condal about the Dance.

“I wasn’t ready to give up on it,” Martin says to THR. “And I liked Ryan’s writing and he really knew my world well — which was a big thing.”

A friend of Condal’s, Sapochnik was brought on board. As for how he would direct the new show, he says, “‘If it ain’t broken, don’t fix it.’ […] I think season eight had been divisive, Bloodmoon hadn’t worked out for [HBO], and they wanted to retain their fans. They wanted to come back to what they knew.”

Sounds good to me! It also sounds like a very calculated course correction for HBO. They tried to experiment with Bloodmoon– and I think I would have enjoyed it, but they got cold feet, and are going with something with a more familiar structure. Formulas can be boring, but they also work, for a reason. They wanted a fight for a throne, and they will get one, with the Dance.

There are a lot more details at the Hollywood Reporter so read the full piece at the site!