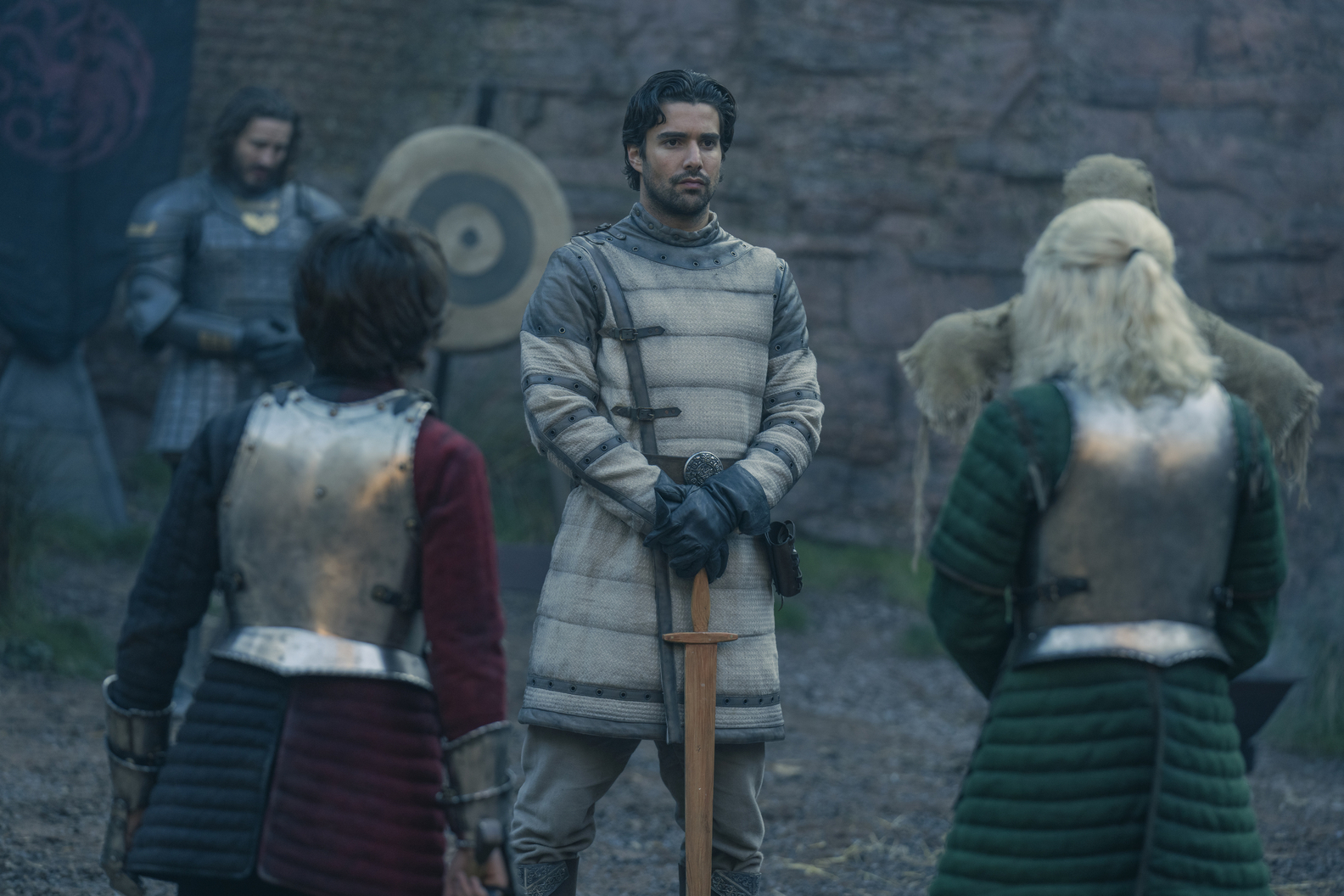 Guns do not exist in Westeros. But by God, there are plenty of men shooting bullets.

Holy shit. Where did all these kids come from? Who the hell are they? Where the hell are your parents? And who are these little dark-headed shits? The show skipped ahead ten years because they knew we had no interest in watching a full season of Romper Room. Good move, showrunners.

My name is Oz of House Oz. And you are correct… no books. Just a normal guy finally sitting down with a grilled cheese and a bowl of tomato soup on Sunday night to watch another episode of How to Childcare in Fantasy Medieval Times.

Seriously, can you imagine the moms of today trying to navigate what your kids can and cannot do outside in Westeros? It’s not like you can hand them the iPad and send them to their dungeon.

Hell no… you would be forced to let them go run and play while every other living person has a sword or dagger or a bow and arrow they could trip and fall on. Not to mention the flying fire-breathers who mistake children for lambs when they are really damn hungry. And don’t even get me started on the dirtballs trying to pick up young girls… oh she’s 12?? Let’s get married!!

My mom would never let me out of the castle. And you folks are gross. 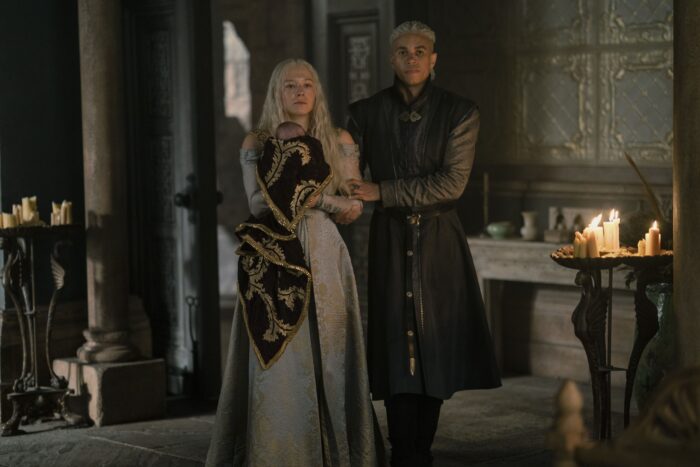 We start with another childbirth scene and let me tell you something my dudes… there is most likely no pain you have ever felt that compares to the equivalent of passing a basketball through an opening in your body. I mean, I admittedly have never given birth so I don’t know from experience. This is just an educated guess after watching the show and having witnessed two live childbirths.

Laenor tells Rhaenyra about that one time he stumped his toe and no, just shut up and keep walking, man. It’s not the same.

Alicent wants to see the kid IMMEDIATELY now dammit! My first thought was, “oh shit.. is she killing them as soon as they pop out?” But nope. She just wants to see what the kid looks like and make snide remarks to the gay man. 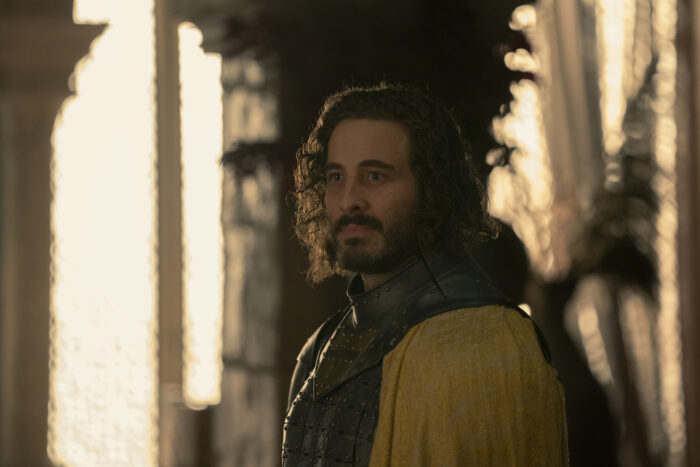 And who is the curly-haired, buffed-up bearded Kenny G dude and what is he doing in there?

Laenor dooms the kid even further by naming him “Joffrey” as Viserys continues to ignore the obvious. And who could blame him, right? At this point, I assume he’s just happy to still be breathing, and a problem is not a problem until someone makes it a problem. You think he’s going to? Oh hell no.

Next up, all the boys get together for the long-awaited live version of How to Train Your Dragon. Aegon and Rhaenyra’s two boys gang up on Aemond who apparently didn’t get a flying flame-thrower for Christmas and present him with the Pink Dread. And now we know that lipstick on a pig in Westeros is not just a pig. It’s a dragon.

Aemond then attempts to obtain his own pet and comes close to being barbecued and this is why mom won’t let you out of the house. He runs back to his mom who is hanging out with her sweet daughter. She assures Aemond that he will have a dragon to which Helaena states that he will have to close an eye and I think we know what that means, maybe?

Alicent makes her way to King Skeletor to explain the issues with the dark-haired kiddos which he quickly dismisses because it’s hobby time, honey. She then goes to Criston Cole who has clearly been moisturizing and exfoliating daily for ten years. 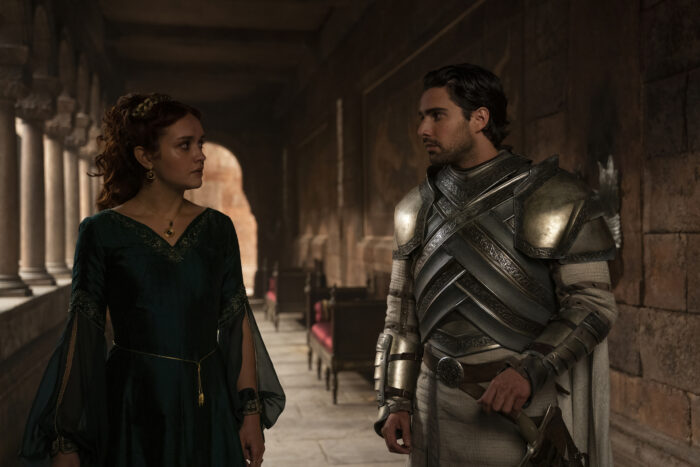 After discussing genealogy, DNA and beauty care secrets with Criston, Alicent heads (no pun intended) over to find Aegon and let me just say this… judge not, lest ye be judged. Be honest… every dude reading this knows that at some point or another they have stood on a windowsill of a castle completely naked pleasuring themselves in the sun while overlooking their vast kingdom. Dare say you haven’t and I will call you the perjurer you are.

Alicent has apparently seen this behavior before and goes straight into why he must challenge the succession or likely be killed by Rhaenyra once she takes over. And it’s got to be coming soon (woops, I did it again).

We travel across the pond and the annual Pentos Air Show is in full swing and is phenomenal! 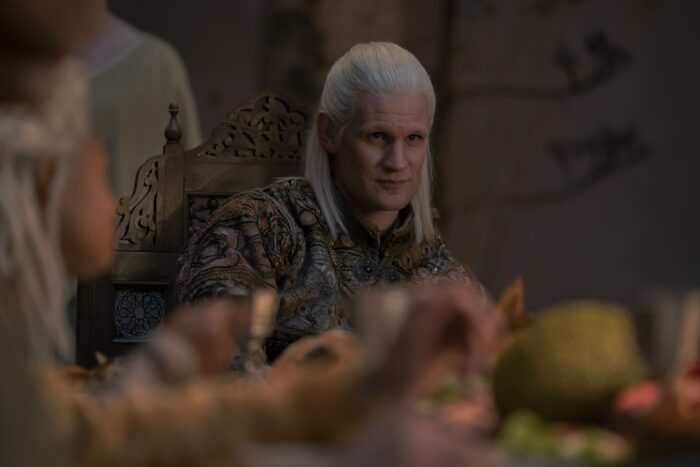 Daemon and pregnant Laena are offered residency for their children and oddly enough, Daemon is the one who is more interested in the offer. Settling down and having children will do that to you sometimes. But Laena would rather have their daughters raised where she was and wants to go back.

Back over in dysfunction village, Harwin “Kenny G” Strong and Criston “Oil-of-Olay” Cole get into it over equal treatment of the boys and a comment about a “son” leading to a walloping which will most certainly require Criston making a run to Ulta to grab some concealer.

However, it was mission accomplished as it pretty much confirmed the rumors about Harwin and Rhaenyra and subsequently leads to Lyonel attempting to resign as Hand of the King. 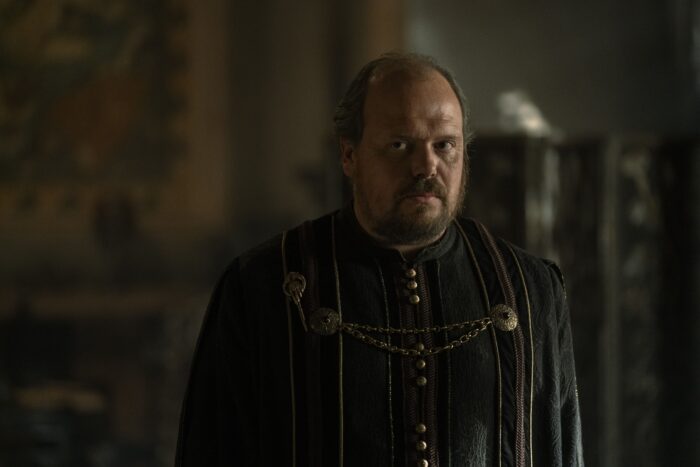 Viserys shunts the resignation but agrees to let Lyonel escort Harwin back to Harrenhal. And man, did Harrenhal look awesome. Larys passes that info on to Alicent who vocalizes how much she misses ostracized Otto but doesn’t realize that she’s telling someone who has motives of his own. Larys = Littleflower. Wonder what he’s been doing the past ten years besides gardening?

Rhaenyra realizes that none of this is good for her family and offers up the quickest fix and the oldest trick in the Westorosi book… a wedding! This one would be between her eldest son and Alicent’s daughter and I’m just guessing she’s not going to be cool with that, considering.

Back across the pond, we have yet another childbirth taking place and this one isn’t going so well. Daemon does not tell Laena about that one time he bruised his knee and how bad that hurt. He also does not give the ok for Laena to sacrifice her life to save the baby. Laena then makes her way down to her dragon (Vhagar, I think) and gives the order so that she may die a dragonrider’s death. The hesitation of the dragon made the scene pretty freakin’ intense. 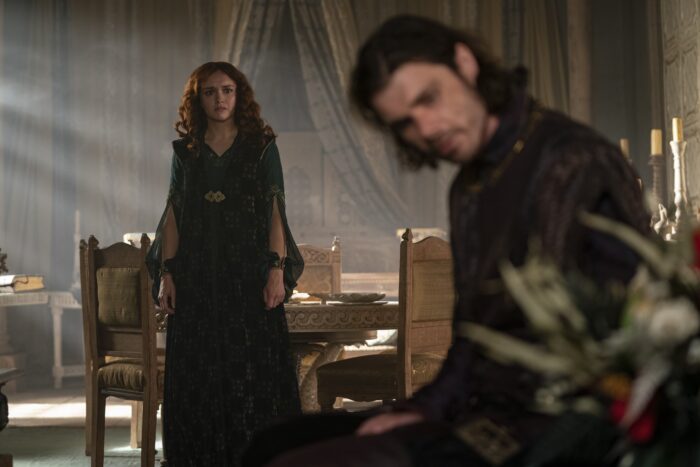 Littleflower makes a deal, cuts some tongues, and bakes Lyonel and Harwin which was not the soul intent of Alicent. Wait, this fucker cooked his own family? That man is playing the Game. The bee is buzzing my friends.

Rhaenyra sees the writing on the wall, loads up the truck and moves to the Stone with kids, Laenor and new Laenor-lover in tow. The wise sailor indeed flees the storm as it gathers.

Great episode once I got past the land of confusion. The beginning I will admit was somewhat disorienting with all the moving kids and new actors and took me a minute to gather what was going on. But once we got all the players straight, it was on.

I’m not sure why it took kid #3 before the peeps were convinced about Harwin/Rhaenyra but whatever.

On that note, it probably would have been good to include Kenny G Harwin a little more prominently in the first eps. I realize he made a brief appearance, but to be such a major factor in this episode’s predominant mess would have made it a little more engaging.

I was not surprised to see Daemon and Laena together after where the last ep. left off. However, perhaps a little context would have been good. It wasn’t that long ago when she was like 8 years old (or looked it at least).

And how the hell is Viserys still alive? I keep saying this, but the end must be soon. There’s only so much saving a leech can do, and this guy has to be on his last leg.

See you all next week for another edition of “Recaps with Oz.”

HoTD, HOTD 106, House of the Dragon, The Princess and the Queen