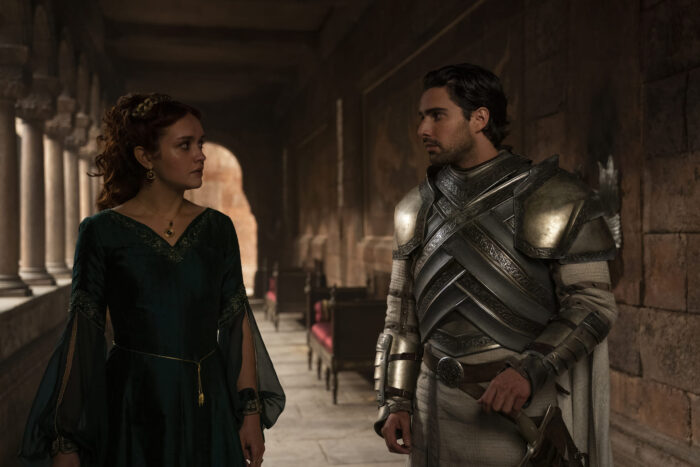 The tension (and the heartbreak) is ramping up as we head into the second half of House of the Dragon’s first season. “The Princess and the Queen” introduced new characters, killed off existing ones, and had us questioning where our loyalties should lie. The drama will only get more intense as we hurtle toward the finale, so let’s shout “dracarys” and bathe ourselves in the fire of today’s interviews and videos! 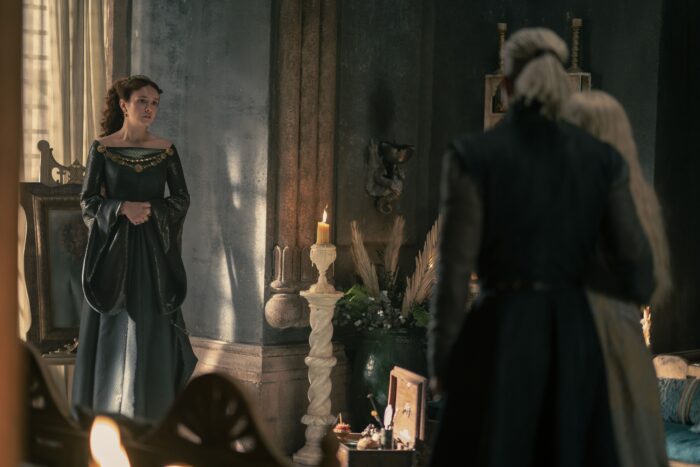 Speaking with Collider, Emma D’Arcy and Olivia Cooke discuss Rhaenyra and Alicent’s motivations, and how their relationship changes over time. Says Cooke, “It’s incredibly bad parenting [by Otto Hightower]. Alicent has been groomed, from a very early age, solely to further her father’s political ambitions. When Alicent is used as a pawn, she’s a child. She doesn’t know any better. When she’s used as a pawn in Otto’s plan, it really drives a wedge between Rhaenyra and Alicent, that chasm only grows bigger and wider, as the series goes on.” D’Arcy adds, “That’s the whole thing. It’s that early relationship that enables feelings of betrayal, of loss, of resentment, and of jealousy. The foundation for all of that is in the childhood friendship.”

Rhaenyra not only loses that friendship, she also loses the freedom to live life on her own terms once she bears the weight of being heir to the throne. D’Arcy explains, “What’s really interesting is that Rhaenyra has grown up with an expectation that there will be, at some point, a brother who will take on the heirdom and carry the lineage forward. She’s grown up always knowing that it’s not her destiny and that she will always be, to some extent, set aside as an aside. When we first meet her, a lot of her freedom and spirit comes from an identity built around that. It all starts unraveling, the moment that suddenly the rules change.”

They continue, “What I find really moving about the character is when she receives the heirdom, she never understands that the rules have now changed for her. Things that she would have gotten away with yesterday, have completely different ramifications today. No one tells her that this role will require sacrifice, so she learns that the hard way, over years, through the series.” 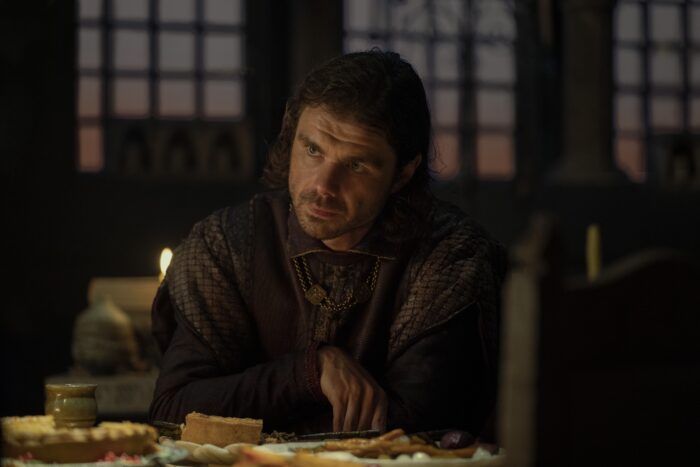 Someone who takes advantage of the conflict between Alicent and Rhanyra is Larys Strong. Matthew Needham defends his character to Vulture, saying “Everyone’s got very villainous qualities. I’m playing him like a hero, but I think that’s maybe just what I have to do to motivate it. But I don’t see him as a villain, really. I’m not playing that. He’s got, in my head anyway, quite a noble ambition, but it’s probably a sick one from an outsider’s point of view.”

Speaking of sick, what does Needham think about Larys’ kinslaying? “He gives [Alicent] the thing she wants in a way she never expected. He makes himself indispensable to her, really; he ties them together in blood in this extraordinary act of will. To do away with his family like that in order to give her what she wants — to bring her father back, to strengthen that part of the game…I don’t think he’s a chaotic sort of person; I don’t think he’s messy. It’s very, very deliberate. He might seem completely mad, but it’s very methodical.”

Needham elaborates on Larys’ ability to kill the brother who looked out for and protected him by saying, “I think his views on nature are important. You can either see nature as harmony and things living in perfect balance with each other, or you can see elements of nature as being a succession of tiny murders. For something to grow, something has to die — that sort of thing. Larys talks about how love is a downfall. It’s not that he’s without love; he’s just able to overcome it. He’s playing life on life’s terms. He’s able to play the game, and the game isn’t won by sitting around the campfire, singing ‘Kumbaya.'”

Check out the full interview at Vulture. 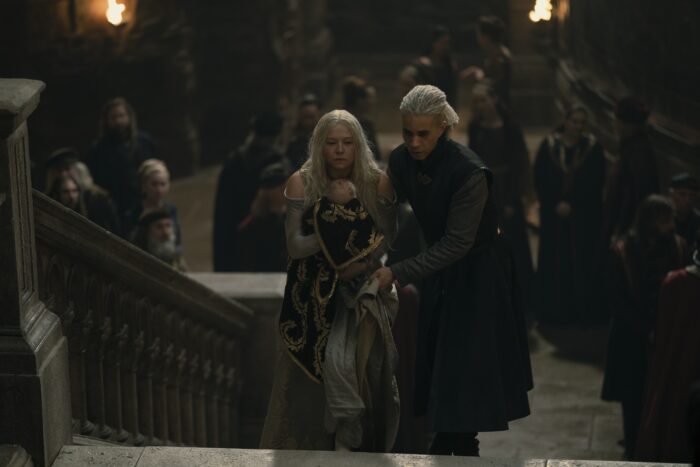 Showrunner Ryan Condal made the rounds with several to discuss the time jump that kicks off the second half of the season. In Entertainment Weekly, he shares why they decided to make the aftermath of Rhaenyra’s labor a focal point. “We knew we wanted to begin with Rhaenyra giving birth because it felt like that was the thing that she was most afraid of coming off of the death of her mother in the first episode. The reason that she really did not want to get married and sold off into aristocratic marriage pacts was because she was terrified of dying, going the same way that her mother did.” Condal continues, “We made this decision to make poor Rhaenyra, fresh off of childbirth, have to haul herself out of bed and then drag herself still bleeding to the queen’s apartment. It’s a combination of where we wanted to be with the characters, servicing the book, and then finding a really cinematic way to tell that story.”

Condal also explains the choice to flesh out the character of Larys Strong. “We just decided that Larys was smart enough in the history to never to get himself written down into many of the accounts too much, but we knew he was a schemer. We knew he was operating in those places, but he was wise. So nobody really knew what he was actually up to…we took what we knew about the character and placed him into interesting dynamics, situations that had political things to be lost and gained. How is he going to play and what is this person actually gonna do?” Quite a lot, it seems. And probably not much of it good.

Head to EW for more. 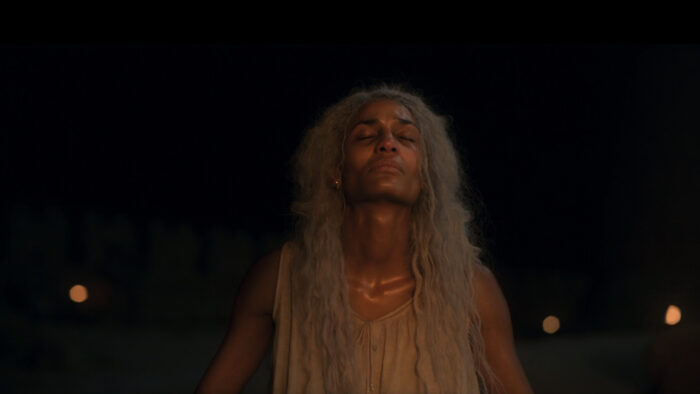 Speaking to Variety, Condal talks about Laena why they changed her manner of death. “Laena’s a valkyrie. She’s a dragon rider. We met that little girl back in Episode 2; that little girl went on a couple years later to claim the biggest dragon in the world. It felt like she wouldn’t want to go out the way that the history book said. Unfortunately, because of the nature of the season and the storytelling, we didn’t get to spend as much time as I think we would have preferred to with Laena. We had to keep the story moving. So we wanted to give her a memorable out that felt active and in her character.”

He also shares his thoughts on the criticism of Criston Cole’s killing of Laenor’s lover, Joffrey Lonmouth, in episode five as a “Bury Your Gays” trope. “People are going to react how they’re going to react. First of all, that was the story in the book. It was handled, again, slightly differently: Joffrey is murdered by Criston Cole out of a jealous, wounded rage at a tournament. We just had him do it out in the open, and watch Cole’s frustration over the slight that he feels like he’s been levied with. It’s a brutal world. It’s a violent world. Cole has exposed himself, I think, as a certain kind of character. It wasn’t done without thought. I know people are going to react as they react, but, you know, that’s the story we’re telling.”

The rest of the article is worth a read over at Variety. 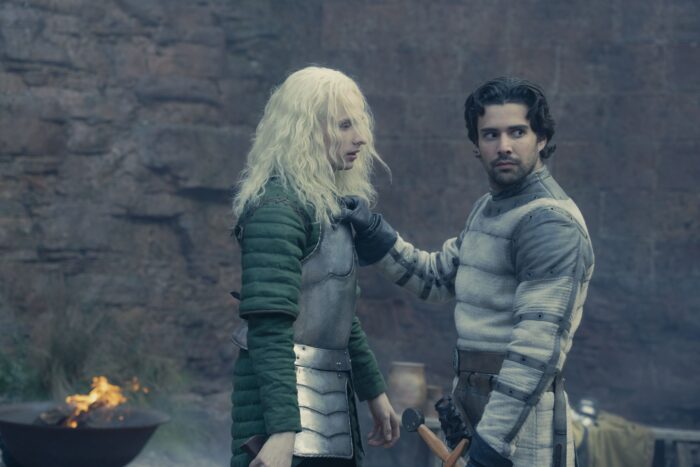 In The Wall Street Journal, Condal again addresses the time jumps necessary for keeping the plot moving. “It’s the story of a generational conflict:  Two young women are forced into arranged marriages early in life, then grow up to have children, who grow up to cause problems for everyone else. Those seeds need years and years to grow. We decided to make hard time jumps, and trust the audience to come along for the ride, knowing that they’d be following the characters, not necessarily the actors. I said to HBO, ‘Look, I know this is something you’ve never done before, but The Crown is a model for how it could work.'”

As for whether we will see the younger versions of Rhaenyra and Alicent again, Condal explains, “It’s not a flashback kind of show. The past is the past. But anything is certainly possible in future seasons.” He goes on to discuss the ease of casting the older actors and how they found their younger counterparts. “That process was actually less fraught because we had two wonderful actors present themselves right out of the gate. Then we had to find people who looked like them but were also tremendous actors. In casting young actors, the sweet spot is the age when they’re coming out of drama school, in their early 20s. Earlier than that, you’re relying on people that have a natural talent, and it’s more of an open, general casting. You’re watching thousands of videos and holding up photos next to photos. It was a long process to find the right combination of those people.”

Go here for the full interview.

In case you missed it, here is the preview for episode seven: