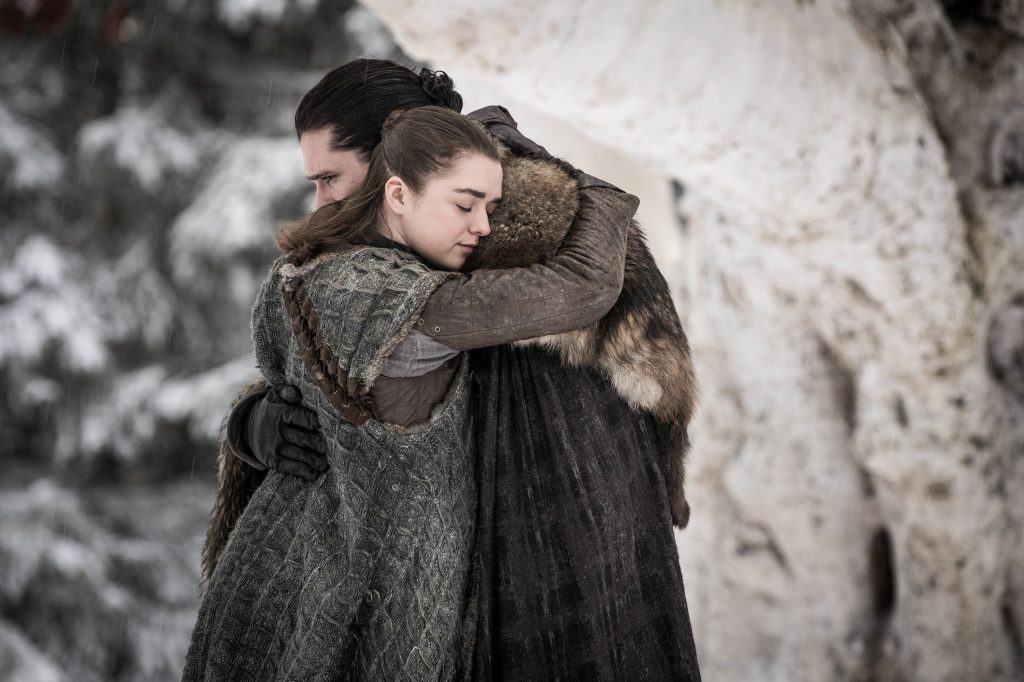 The wait for the beginning of the end is finally over. The feelings are real. The emotions are real. The reunions are real. And the inevitable is real. This phenomenon that many of us have been nothing short of fanatical about is coming to its denouement. Like it or not, agree with it or not, there are only a few short mornings we have like this left.

Let’s put aside our differences and analyze, discuss and ponder as adults. We all know that this is not going to end necessarily the way we want it to. It’s numerically impossible. But I can promise you this: It’s going to be glorious and painful and triumphant and downright miserable all at the same time. Join a man… and let’s do this together!

Welcome to the in-season, boys and girls! I am your Unsullied leader and this post is where show-viewers only get to release their likes/dislikes/understandings/misunderstandings in a safe environment guarded against those who may judge us for being uneducated idiots (although we value all feedback constructive pleasantries).

How about that new intro??? 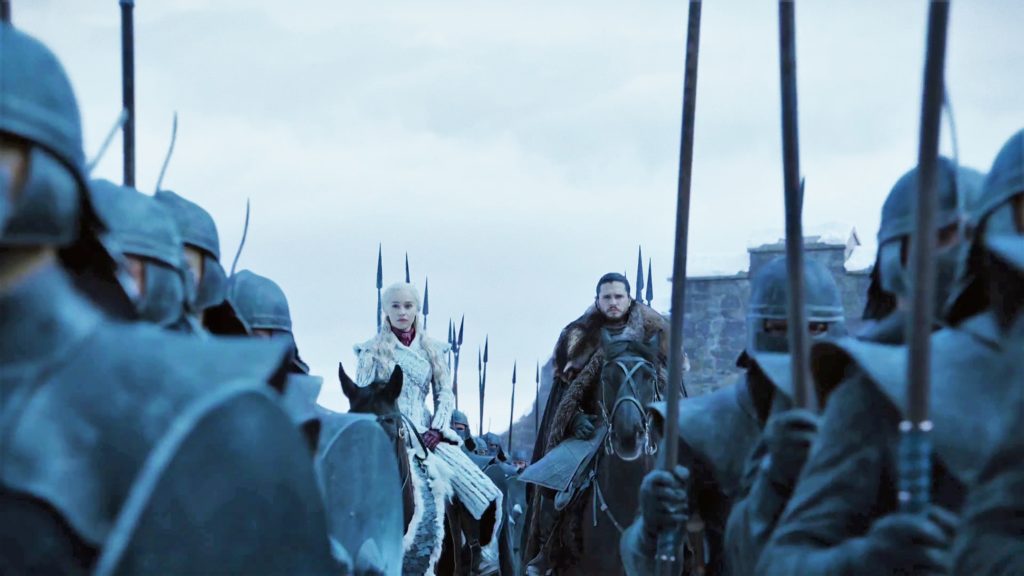 What better way to ring in the new season by reminding us who is still alive and heading to Winterfell (it has been almost two damn years, so thanks HBO).

Arya is clearly waiting for the Unsullied to throw her some beads and to see who entered a float in this years’ version of the winter celebration. She wanted to yell at Jon. I wanted her to yell at Jon. But we save the reunion for later and I’m content that we did. 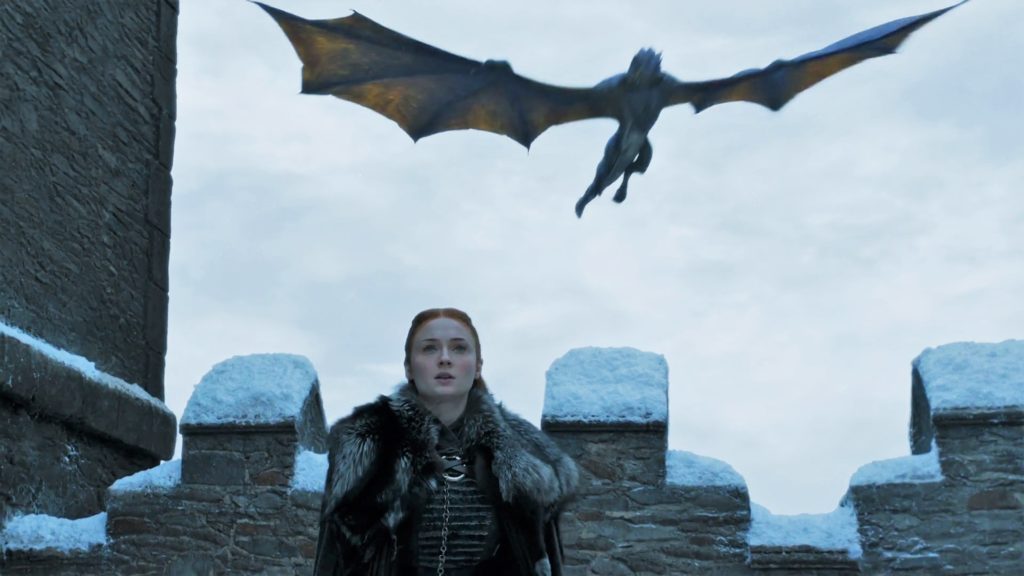 The dragon balloons were incredibly life-like and a huge hit with the parade attendees, other than Sansa.

It starts off well enough with Jon finally reuniting with Bran and quickly realizing that the little boy he used to know is vastly different. Before Dany can fully enjoy Sansa’s expected warm greeting, Bran breaks up the party. 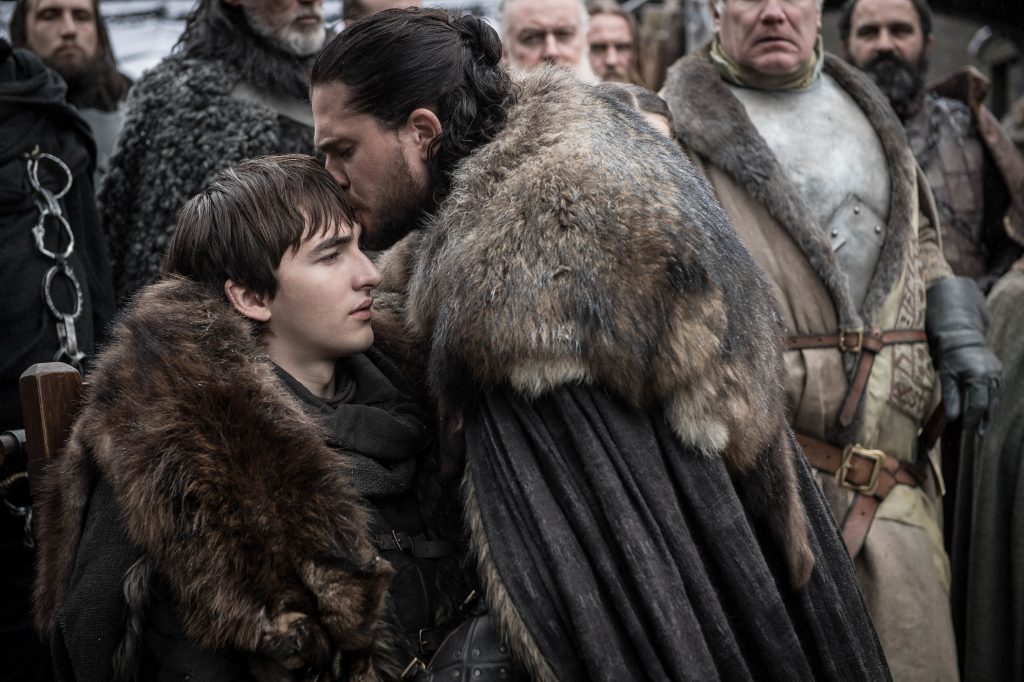 “This is nice and all, but we ain’t got time for this shit.”

Inside the gathering hall, Little Lord Umber tells Sansa that he needs horses and wagons to round up the folk at the Last Hearth. I yelled at him from my couch that he didn’t need to go; that the intro already told us where the AOTD’s first house call would be. He couldn’t hear me. 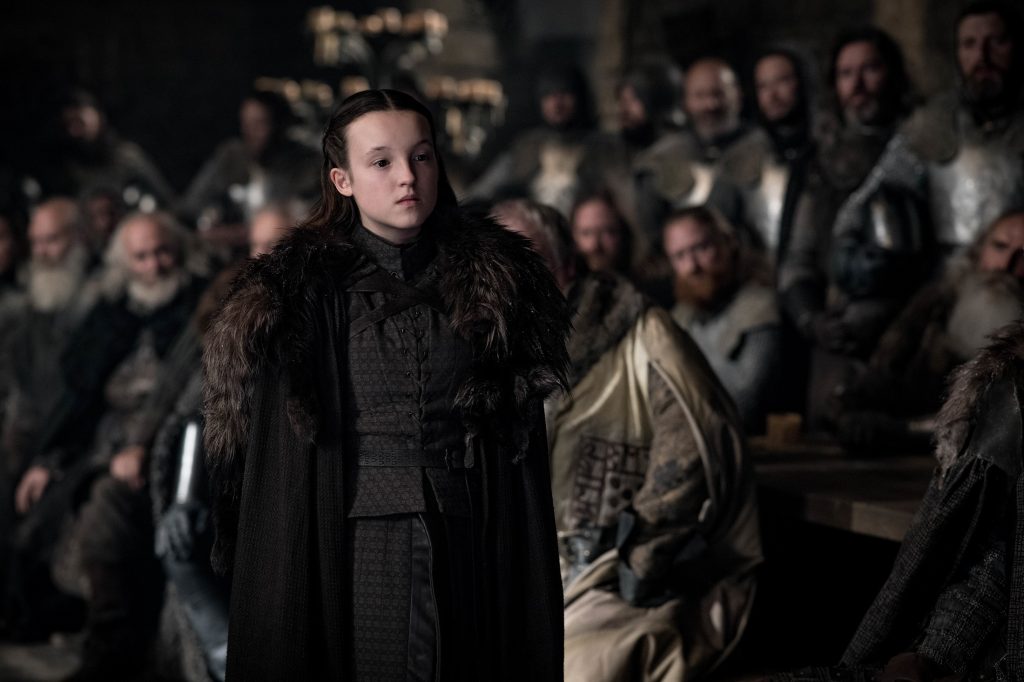 Next up was the always bashful and shy Lady Mormont who is confused on how to address King/Lord/Pushover Snow. Jon begins his same season 7 spill on how he didn’t choose to be king when thankfully, Tyrion steps up.

How many times does everyone in the North need to be reminded that there are thousands of frozen zombies coming to destroy them?

Understandably, Sansa is perturbed by anything having to do with the newcomers. There is nothing wrong with her having doubts. But complaining about what everybody is going to eat when the dead are en route to kill everyone is just one example of why many don’t like her. The writers don’t do her any favors.

Yet, she then reveals her wisdom by letting Tyrion know that he’s not very clever if he thinks Cersei’s army is coming North. She’s right of course, and where this series leaves her standing is still a mystery. As I said, her arc is still a work in progress.

Eight Years Waiting on No One

Arya and Jon finally reunite with a hug that probably made you cry (or at least think about it) where they compare swords and have a laugh. Arya reinforces that Sansa is looking out for the best interests of the family.

When they ask me to write this post, they ask me to give my true feelings on the episode, so that is what I will do. Seeing Arya take up for Sansa is heart-warming and refreshing considering the differences the sisters have had. But all of a sudden she is the smartest person she’s ever met? OK. That’s not Sansa-hating. I don’t hate her. That line just seemed like an extreme in an effort to emphasize Arya’s support for Sansa. Having said that, we get the point.

“The dead have broken through the Wall.”

Cersei still doesn’t get it. Or maybe she does and she’s just mad.

Regardless, Euron brings in the Golds along with newcomer Strickland and reveals that Yara is alive and somewhat well and tied up below the deck of the ship.

Cersei once again fends off the romantic advances of Euron only to seemingly have second thoughts. You have to assume she realizes that she really has no one left and to keep his loyalty, she has to give him what he wants.

What she really wanted was elephants. Apparently Euron doesn’t have one (hehehe).

And sorry Euron… there’s already one in the oven. Or is there?

Ser Bronn of the Brothelwater

Nobody in the KL seems all that worried about the frozen dead. Everybody’s just getting naked.

I’m not going to elaborate on the deal with Bronn because I already have. My conjecture is almost always admittedly wrong. But not on this one.

The Redemption of Theon

Theon’s atonement tour is in full swing already as he rescues Yara from Euron’s yacht. I’m not going to say it was excessively easy, but I’m not saying it wasn’t. Yara makes it clear that she is going to retake the Iron Islands while Theon feels the need to continue to pay restitution for his prior indiscretions and head back to Winterfell to help the Starks. And yes, this makes me very pleased. 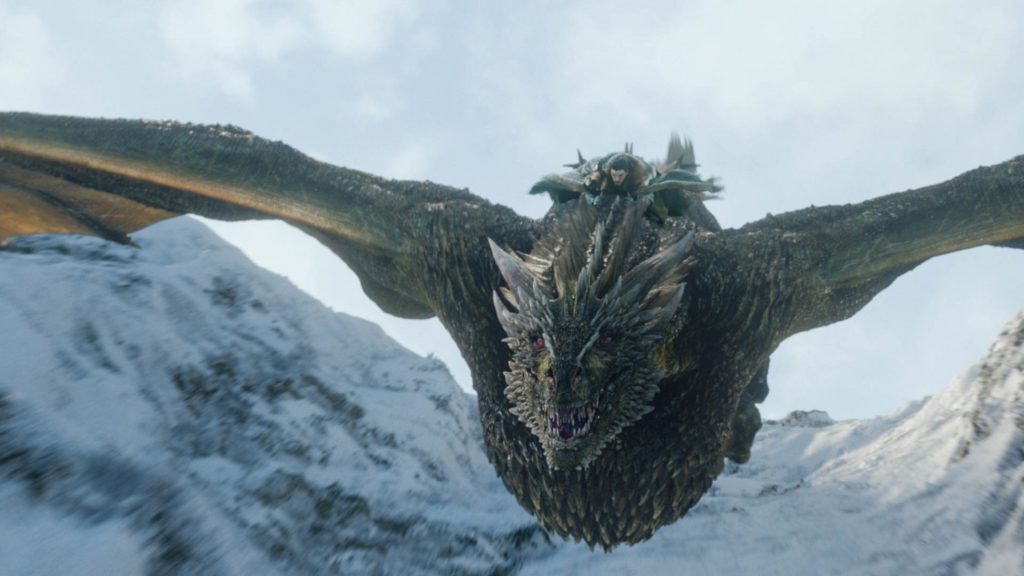 The Dragon Roller Coaster of Love (say what)

Look… I try to be upbeat and positive about everything so I’m going to do my best to give this sequence a pass. I suppose there needed to be a Disney-esque moment where a special romantic interlude was included to help sell the deep love that Jon and Dany now apparently share with each other. But God, this was cheese. I had hoped the first time Jon rode a dragon it was going to be something awe-inspiring. Instead it was kind of aww-ful.

And then, let’s-get-down-to-business-take-the-throne-with-fire-and-blood Dany is all of a sudden so smitten that she suggests climbing into a waterfall with Jon for 1000 years where no one would find them. I completely understand what they are trying to accomplish here. But this seemed forced, especially with the dead on the doorstep.

But, oh well… if you disagree, sound off below. 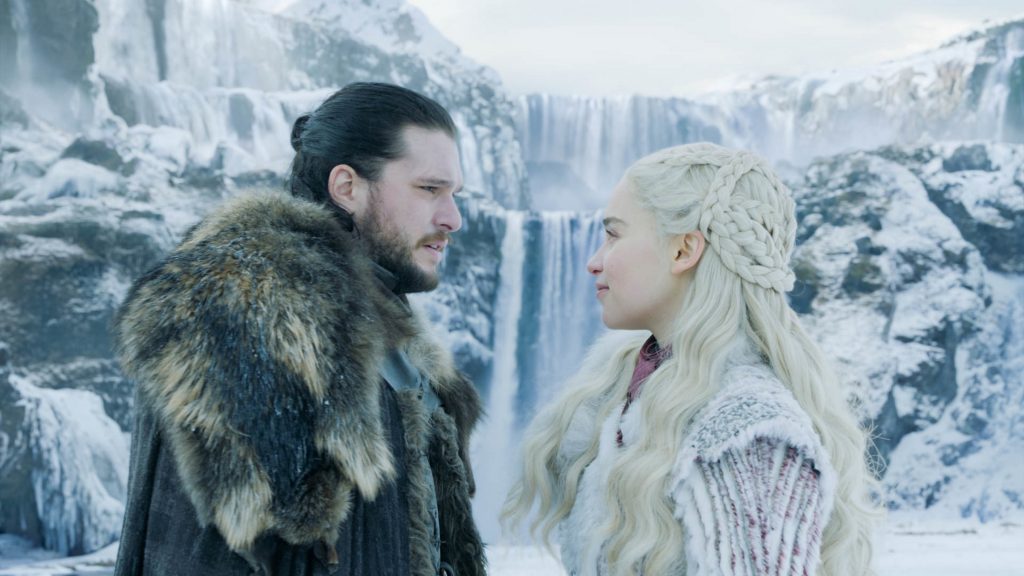 I’m more interested in knowing what Dany was about to say about Sansa before she was interrupted. “If she can’t respect me…” 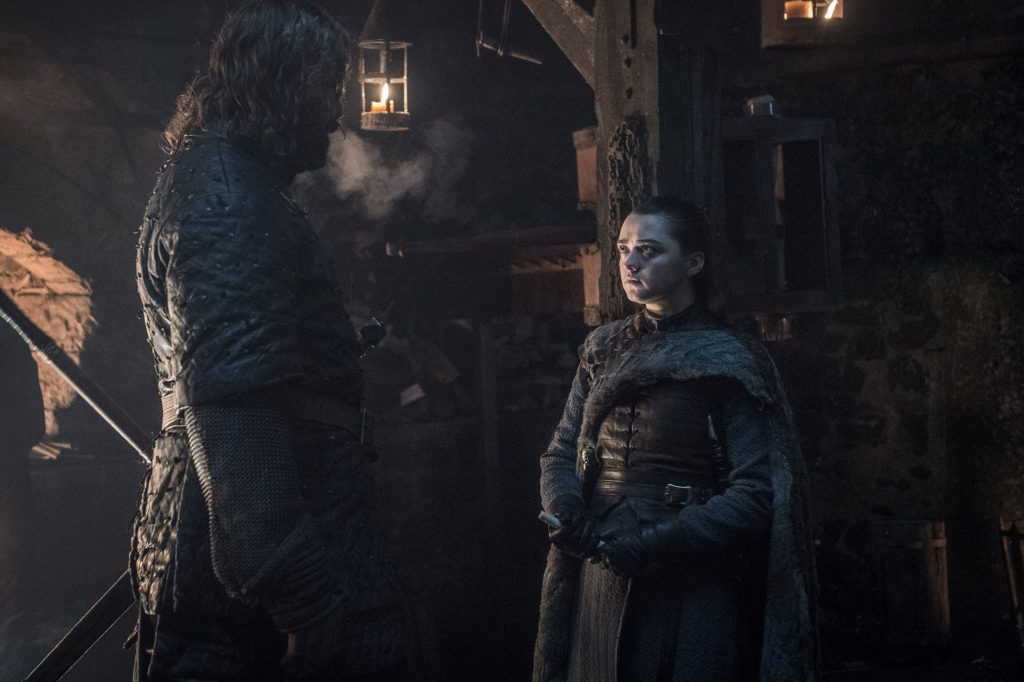 No One, a Bastard and a Hound

Arya reunites with two former sidekicks at once meeting both the Hound and Gendry at the same time. The Hound/Arya could have been a little more riveting considering their time together was one of the more entertaining pairings of the series. However, I’m sure there’s more to come.

But were the sparks flying with Arya and Gendry or was that just weapons being forged?

We knew a showdown was coming between Jon and Sansa and the fact that he is no longer a King. It didn’t last long and while Sansa’s concerns are legitimate, Jon defends himself and reminds her again that they were in desperate need of help to fight the dead. 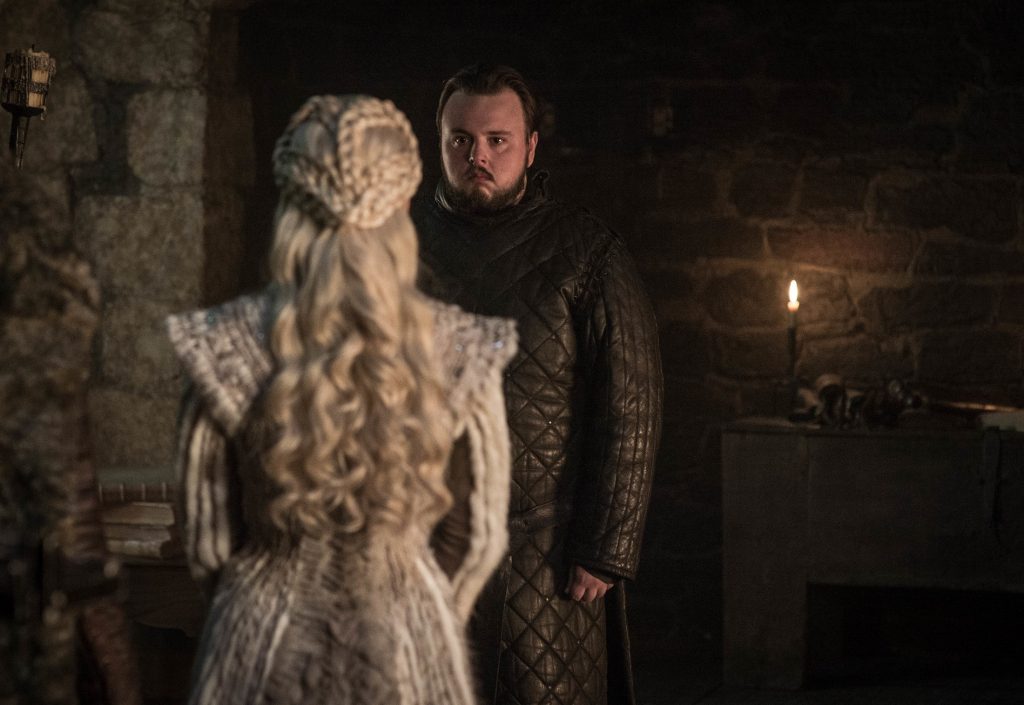 If there is a library scene, you can bet your ass that Sam is going to be in it. But it doesn’t go well for Dany as Sam gets very emotional after realizing she barbecued his father and brother. Remember, Tyrion begged her not to. And Sam and Jon remain very close.

Sam then retreats and finds Bran who tells him that now is the time to tell Jon the truth. Jon understandably doubts Sam after being told he’s not the King in the North, but rather the King of the fucking world. Episode 2 is going to be very intriguing. 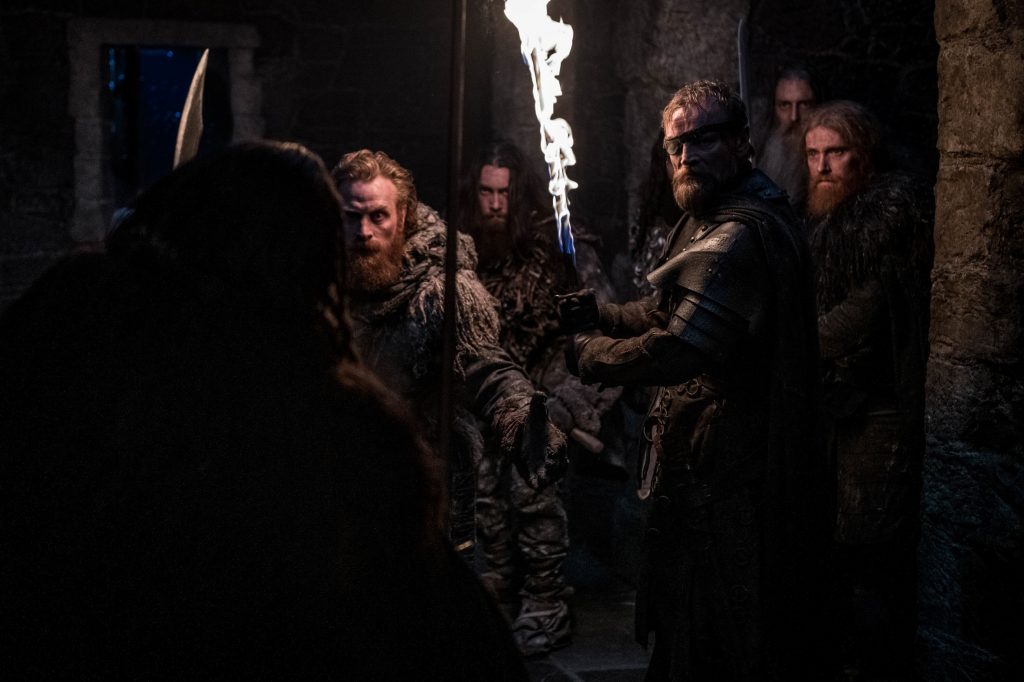 Beric and Tormund are alive as is Edd and other Crows. Considering the Last Hearth was in that fancy new intro, this is likely where they are with blood everywhere yet no bodies, save one: Little Umber. And his eyes are bluer than Tormund’s.

Waiting for a Friend

At the end, a hooded figure rides into Winterfell that ends up being Jaime F-ing Lannister. And guess who is there to greet him first… his old friend.

“What do dragons eat, anyway?” “Whatever they want.”

“Poor girl. The pox will take her within a year.” -Qyburn

“Did you bend the knee to save the North, or because you love her?” -Sansa

“You gave up your crown to save your people. Would she do the same?” – Sam

The “Ow, That Shit Hurts Award” goes to: Bronn, for having to stop in the middle of the act and then stuff it in his pants

Two Guys I’d Most Want to Grab Some Sour Goat Milk (but preferably a beer) With: Beric and Tormund because, dammit, one of them is going to die soon

Overall Thoughts: Despite my minor complaints, I really liked the episode. The reunions seemed a bit rushed and didn’t necessarily meet expectation. However, there was a fair amount of methodology necessary and if the payoff is five episodes of holy shit moments coupled with incredible storytelling, then I can absolutely live with it.

To be honest, I’m just glad the damn show is back.

That’s it for me guys and gals! Thanks for putting up with my perspective and please share yours below.