The following is an opinion piece from guest contributor and WoTW reader Morgoth. The opinions expressed below do not necessarily reflect those of Watchersonthewall or its staff.

This is probably going to sound rather cliché, but here we go: I’ve been a fantasy fan for most of my life. It all began with J.R.R. Tolkien’s book The Hobbit. My father got it for me during a time in which I had given up reading books in favour of television and video games. I couldn’t pick up a book to save my life.

But the story of a hobbit whose life suddenly changes when a wizard and a bunch of dwarves take him on an adventure changed my life as well. For the better. After finishing with The Hobbit, I was left hungry for more. I tackled The Lord of the Rings, The Silmarillion and other Tolkien stories, and developed a taste for epic fantasy.

I’ll admit that at first I was sort of a purist –I wanted film or TV adaptations to be as close as possible to the source material. Deviations or new content added by the screenwriters annoyed me, as I couldn’t understand why they would want to change that, it is perfect the way it’s described in the book.

Peter Jackson’s film adaptations of The Lord of the Rings were like a dream come true for me. Sure, things were changed, some characters were cut (poor Tom Bombadil) and some chapters were also gone, but the source material was mostly respected and taken to the screen with love and care. Now, The Hobbit adaptations arrived to the screen after years of expectation, waiting and more waiting. I was at first confused and nervous about the decision of splitting it into three movies, but after watching An Unexpected Journey and The Desolation of Smaug, I was pleasantly surprised. It’s the story I know, but it’s also a new one. Instead of feeling aggravated, I was excited to see new elements and finding myself wondering what could happen in the next film.

Now, regarding A Song of Ice and Fire, many people are considerably (and understandably) nervous about the show overtaking the books, but even if it happens (which is a sure bet for many fans), it shouldn’t be something bad, and here’s why:

This is perhaps the most important of my points.

Sure, not knowing what the final destination is can be part of the incentive to board this train in the first place. But knowing it doesn’t have to ruin the whole thing. Knowing that the Titanic sank didn’t make Titanic any less successful. The same could be said of Frodo’s journey: most of us knew the outcome of that story, but reliving it in the big screen was an amazing experience.

Same could be said of many, if not most, movies, books or tv shows. Before reading the books we can be certain that Harry Potter will defeat Voldemort, and before watching the films it’s a safe bet that Luke Skywalker will triumph over the evil Empire. Action heroes save the day at the end, superheroes save the world and defeat the villains, the monsters and serial killers are destroyed and the underdog team always finishes in first place. The detectives solve the mysteries and the oppressed peasants manage to overthrow their abusive tyrant of a king. Very few stories end in a different note, and yet we keep enjoying and consuming the very same tales over and over again.

Some of these stories are as old as humankind itself, and the reason they’re still around is because they are good. There’s no such thing as an original story; the key lies with the characters, their dialogues and the way their journey is told.

Now, I’m not saying A Song of Ice and Fire is a predictable story (I can’t even imagine how it’s going to end), but rather that the destination is never as important as the journey itself. Think about it and you’ll see it’s true.

If you’re a book fan, are you really giving up on the books because another form of media reached the conclusion first? Is the whole story ruined forever? Don’t you think that’s a little bit too dramatic? Instead of focusing on the final twist (if there’s any) or in how it all ended, people should focus on the story, on how it all led to that end result. The ending isn’t the be all and end all of a work of fiction. 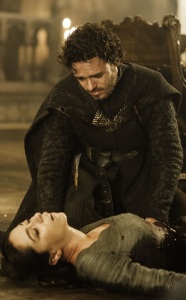 While (obviously) there are similarities between the two, I’d say it’s safe to assume the show is its own thing now. The books are the books and the show is the show, as the author himself said. There are enough differences to tell them apart, many of them clearly the result of budget or time constraints. The show’s battles are impressive and exciting, but not as big as in the source material. Lots of characters were cut because the cast is already too big, and adding more people would be counter-productive. Important events, such as the Red Wedding, were handled in a different way in the show.

That said, there’s no way the show’s ending is going to be a carbon-copy of the book’s ending. They may share a general idea, and it’s likely that the fates of some characters are going to be the same, but the already mentioned limitations will be present as well. I don’t mean to knock on the show, as all the people behind it have been doing a terrific job so far (and I can’t wait for the following season), it’s just the reality of filming a live action adaptation. Not every detail will be present on the screen.

I’m sure the books will have lots of things (perhaps a turtle or two as well) that will be worth reading, and you can bet the final battle with the Others will be far larger on the page. There’s nothing more powerful than your imagination, and the best version of the story will probably be the one you’ll imagine while reading the remaining books.

As we all know, GRRM is a slow writer. Many people who picked up the first book back in 1996 have been waiting for 18 years now to see how it all ends.

Don’t worry– my intention isn’t to bash the author or to tell him to write faster. He’s aware people are waiting for the last two books and those who decided to wait will get their books eventually. There are fans, though, who are tired of waiting and have given up on the books. I understand them, and they deserve as much respect as people who are willing to see the remaining volumes in book stores one day.

The show’s ending will give them closure and an idea of how the travels of their favorite characters ended. And with that, they’ll be finally able to move on.

There are lots of reasons to love “spoilers” or to know how a story ends in advance. But sometimes the fear of spoilers is justified.

In this modern era, with the internet, social networks and many other ways to constantly communicate with people everywhere, there are some who think spoilers grant them power, the “power” of knowing things other people don’t, and so they take pleasure in inflicting such spoilers on people who don’t want to be spoiled. For some weird reason, they think it is fun to ruin the twists and surprises of a story to readers or tv watchers. For years now, many of these people have been spoiling the show to people who haven’t read the books or have no interest in reading them. 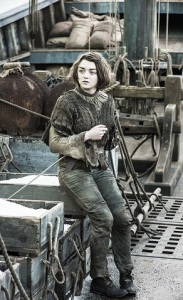 I don’t feel that spoilers ruin the experience or my desire to keep consuming movies, books or other forms of entertainment. They often make me feel even more excited or curious about how the filmmakers or authors will pull something off, or rekindle my interest in subplots or characters I stopped caring about. They allow for discussion and speculation, and create expectation about an upcoming movie, or in this case, book(s).

I suppose getting spoiled is an inevitable thing and the best way to avoid spoilers is to take obvious precautions, such as taking a break from the internet or show-related websites. There’s not much you can do if you have a relative or a friend who loves to spoil things for you, but that’s not the fault of the books or the show themselves.

In the end, what makes the prospect of the show passing the books more exciting is that finally tv watchers and book readers will be in the same boat, sailing towards uncharted territory. We all will be unsullied for once, and I’m sure it’s going to be an exciting adventure.

Do you agree/disagree? What will you do when the show starts portraying The Winds of Winter material? Have you been massively spoiled on anything in ASOIAF/GoT? Leave it in the comments!