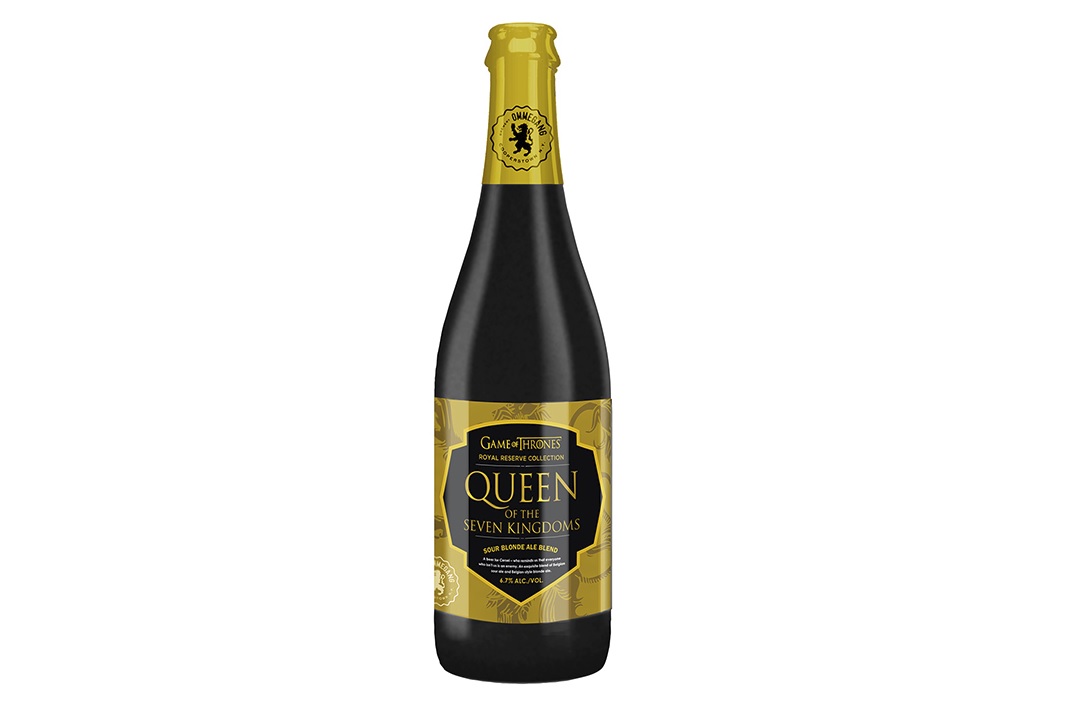 For the sour beer lover, it was thrilling news that Brewery Ommegang and HBO’s latest Game of Thrones collaboration, Queen of the Seven Kingdoms, would be a sour. As sours are a delicious variety of beer under-represented in an average bar, one had to wonder prior to tasting: how would the rich yeast that characterizes Ommegang’s Belgian beers translate into a sour? Would it be mouth-puckering or a milder gose? Would it still taste like an Ommegang beer?

According to HBO and Brewery Ommegang:

The bottle is striking, with a foil-covered golden cap sporting the Lannister lion’s head in profile and a deep, rich golden label. This beer is an impressive pivot from the first of the quartet—Hand of the Queen, dedicated to Tyrion Lannister—in both the color scheme and flavor.

Queen of the Seven Kingdoms is more pungent in the bottle, with a vaguely fruity aroma. It was delightful to watch this beer pour into the glass in a beautiful golden hue not unlike the famed Lannister hair (the seed is strong…). Ommegang beer is gorgeous to look at in the glass and this one is uniquely cloudy. If Ommegang’s other brews are shades of amber, this is a buttery bakelite.

After my first sip of this beer, I actually said “rock ‘em, sock ‘em, robots!” (true story) because it wallops the tongue in a wash of delicious sourness which mellows out to an aftertaste characteristic of many of Brewery Ommegang’s beers. It wasn’t bitter at all, but a smooth ride after an initial burst of flavor. While some sour beers have a dominant fruit flavor—such as Ommegang’s own Rosetta, a sour cherry beer—there didn’t seem to be any specific notes in the tart first sip of this brew. It would be a logical choice of Brewery Ommegang to honor Cersei Lannister with a sour beer; if not for her disposition, especially when fending off Euron Greyjoy in the most recent season, this beer has a subtle wine-like quality which might appeal to someone who usually sticks to vino.

Queen of the Seven Kingdoms is not the tartest sour beer I’ve tasted but it’s definitely not a Belgian parading around like a sour either. If you truly dislike anything sour, this may be fun to try regardless, but it’s definitely a palatable choice for the average beer drinker. For a fan of sours like myself, it’s softer and warmer in flavor (probably due to the rich Ommegang yeast which one can taste in each sip), but without any bitterness that is common to so many other varieties of Ommegang’s beer (“bitter” not meant pejoratively!). This is a more approachable and incredibly drinkable beer that is perfect for summer. Additionally, it has a 6.4% ABV which is lower than some of Brewery Ommegang’s other Game of Thrones beers that come in at 9-10%.

Thanks for reading and please let us know in the comments below if you’ve tried Queen of the Seven Kingdoms! Which types of beer should Ommegang tackle next, or would you like to see a re-release of a previous brew? Cheers!