Reliable sources have informed us that the first costume fitting for the unsullied extras in Split will take place during next week, which means that shooting there is just around the corner. The juiciest bit of news from Croatia is connected to Dubrovnik, though.

Click through to get to that part of the post. Given the spoilery nature of the content, you do not have to use spoiler tags in the comments.

Before the break I would like to extend you my personal welcome to WotW. A new name for us to get used to, but with all the familiar people and content, by the fans for the fans. It is a privilege to be part of it all. HmR signing off 😉 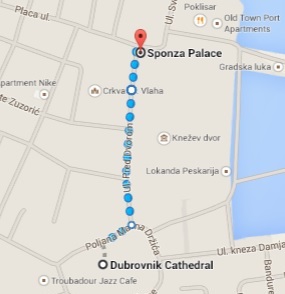 Here goes. We heard that HBO asked the Dubrovnik city council to allow filming of a scene in which a naked actress walks from the Dubrovnik cathedral to the Sponza Palace entrance (readers of course know who that is). The scene will require about 500 extras. As the map (courtesy of Sue) shows, the two locations are set at opposite ends of the old city’s main thoroughfare, Stradun.

Marko says: Excited yet? I know I am. There are some great scenes from books four and five coming up next year.