Peter Dinklage Reflects on a Decade of Tyrion Lannister, George R. R. Martin Leaves An Inimitable Fantasy Footprint | Watchers on the Wall | A Game of Thrones Community for Breaking News, Casting, and Commentary 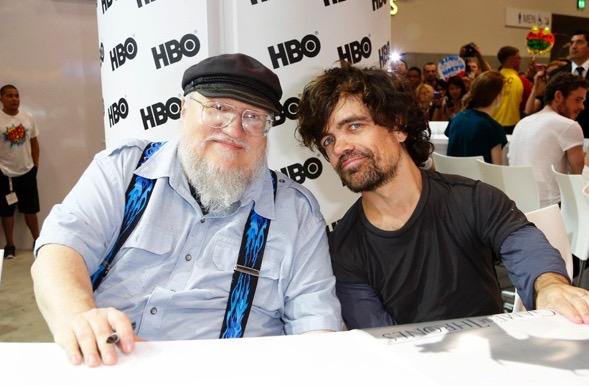 I woke up this morning, assuming I’d have a standard case of the Mondays, refreshing my news feed in the hopes of anything Game of Thrones related – Boy was I lucky to find two juicy articles fresh for the reading. The first, an in-depth overview of George R. R. Martin’s (author and architect of book series A Song of Ice and Fire) life and his lasting impact on the fantasy genre is not particularly revelatory, but is still a lovely read. The other, an in-depth retrospective on the life and times of Peter Dinklage (Tyrion Lannister) is one of the best interviews I’ve read in a long time.

The New York Times George R. R. Martin article reads like an elongated synopsis of what will be the eventual GRRM biography. “Hello. Back again?” George says to a fan at Worldcon who has circled the line upwards of five or six times, hoping for a signature on a different book each time. George’s good nature with his fans is no shock to me, but remains a pleasure to read about it each time I do. With some reports claiming 85 million copies of ASOIAF have been sold as of summer 2018, his consistent down-to-earth lifestyle and humility remains a staple of the ever-growing fandom. Whenever he attends a con, it has become his custom to dine and drink with the city’s local chapter of The Brotherhood Without Banners, a multinational fan collective named after…well, you know. The whole piece makes for a good 15 minute read, and will hopefully refresh you on the little tidbits that make our favorite author so damn good.

The Peter Dinklage interview is in a league of its own, however. In a conversation with Vulture, while promoting HBO’s upcoming ‘My Dinner with Hervé,’ as is so common for any interview with the cast of GOT, talk turned to, well, you know. The finality of season 8 is what really got to him: “I’m glad the show happened in my life when it happened. I’m glad I wasn’t much younger or older. I’d done a lot of work before getting the show that I think informed what I wound up doing on Game of Thrones…The show was a beautiful experience — doesn’t happen all the time. But it was such a long shoot, so it’s hard to separate the TV show from my life.”

After years of acting as the same characters, goodbyes can be cathartic and sad: “A lot of people whom I love were on set that day [his last day of filming]. Even if they weren’t working, they came to set, which was beautiful.” He followed this chain of thought toward’s another character’s final day on set:

I won’t say their name or their character’s name, but one of the young people on the show wrapped this past season and everybody was a wreck. This person had grown up on the show, you know? They were a child and now they were an adult. And then they’re done. It’s like we were witnessing this person saying good-bye to their childhood.

Let the speculation begin! It would be safe to assume he is referring to Sophie Turner (Sansa Stark), Maisie Williams (Arya Stark), or Isaac Hempstead Wright (Bran Stark). While the cast is indeed a close-knit bunch, I would have a hard time believing this comment refers to anyone other than Maisie Williams. Given Arya is one of the popular fictional characters on the planet, I just don’t see that kind of response given to Sansa or Bran (sorry, other Starks – I love you both dearly). Who do you think it is? Lino Facioli, aka heir to the Vale, Robin Arryn? Bella Ramsey (Lyanna Mormont)? The many infants/toddlers who have portrayed Little Sam?

Dinklage takes pride in the journey on which Tyrion has gone: “He certainly developed a deeper sense of responsibility over the course of the show. He was a pretty irresponsible character to begin with. He used his position as the outcast of his family like an adolescent would.” While that was where Tyrion started, here is what Dinklage feels about where Tyrion left off: “I feel very, very — I’m trying to find the right word. I think he was given a very good conclusion. No matter what that is —death can be a great way out.” While I’m sure much of the Internet will be abuzz with this quote, I wouldn’t read into it that much – Dinklage knows what he can and cannot say contractually, and I think he is just whetting everyone’s appetite for what is clearly going to be an emotional conclusion for us all.

I cannot say enough about how intriguing of a read this Dinklage interview is. For more on his life living abroad in Ireland, what questions people have for an American living in Europe, what sorts of projects he wants to pursue in the future, his views on method acting, what it’s like to be an actor with dwarfism, more insight into what it has been like to portray Tyrion Lannister for 8 seasons, and more – literally so, so, much more, please read the entire article!