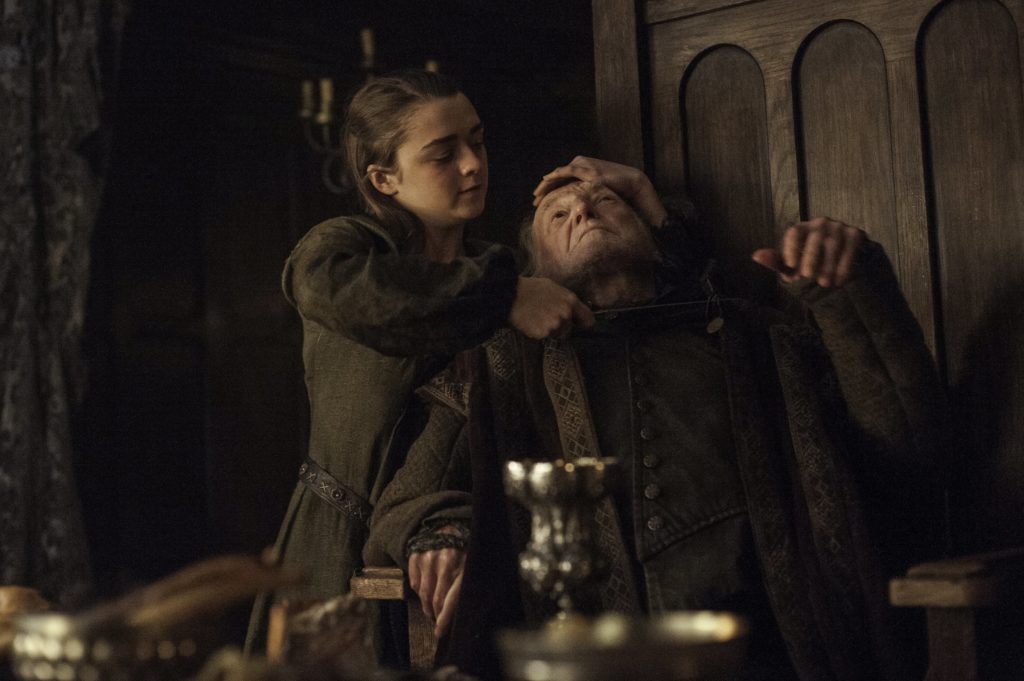 Maisie Williams and Kit Harington recently spoke about the impact, both positive and negative, that Game of Thrones has had on their lives. George R.R. Martin answered fan questions from Time Magazine staffers and Sean Bean weighed in on HBO’s planned Game of Thrones prequels.

In an interview with The Guardian, Maisie Williams, now 21 years old, talked about the personal challenges she faced going through adolescence while starring on a hit TV show.

“15, 16 [years of age] … that’s when the hormones are really flying. Going through that and trying to juggle other people’s opinions on who you are and how you should act, that’s difficult, just because you’re desperately trying to find your own identity,” she said.

Williams was bullied when she returned to school after the first few seasons of Game of Thrones. The situation became so bad that she eventually opted for homeschooling. Quite understandably, Williams said this experience molded her outlook on the world at the time.

“Leaving school, and then going back and having this awful experience, made me really bitter about life and people …” she said. “It is a very honest teenage mindset of, ‘Bad things happen to me, so the world is bad.’ Those are your first steps into the big wide world. It’s not very encouraging.” When asked if the fog has cleared yet, she answered “I think I’m still clearing it,” and laughed.

As for facing the finale of season 8 of Game of Thrones, Williams seems eager to move forward.

“I got to the end and I didn’t want more. I had exhausted every possible piece of Arya,” she said. “And this season was quite big for me. I had a lot more to do … mainly because there’s just less characters now, so everyone’s got more to do.”

George RR Martin recently answered some questions submitted The New York Times Style Magazine staff, which ranged in topic from allegorical interpretations of A Song of Ice and Fire‘s characters and plots to where Martin gets his famous hats. When asked whether fans will ever get to know more about Joanna Lannister, Martin coyly answered that we’ll just “have to keep reading the books to find out.”

Kit Harington spoke with Rick Edwards at Esquire Townhouse to discuss, among other things, how Game of Thrones has impacted his life. Though he shared a funny story about going to Wimbledon after seasons 5 and getting asked by Camilla Parker Bowls whether or not Jon Snow was really dead, he was also honest about the downsides of notoriety.

“I’d be lying if I wasn’t saying I was at drama school dreaming of going into a big TV show, walking red carpets, going to the Emmys or the SAG awards. Of course that’s what I wanted and Thrones threw that like a ten ton truck at [me],” he said.

Case in point, the other day he had to shoo off a fan who was approaching him during an emotional moment at the airport.

Harrington didn’t say much in the video about how life has changed for him since completing Game of Thrones. However, he did express his delight at finally getting to respond to the fan greeting, “Are you Jon Snow” with “Not anymore.”

Lastly, while discussing his upcoming TV show, Medici: Lorenzo the Magnificent with The Hollywood Reporter, Sean Bean was asked if he’d be interested in appearing in any Game of Thrones prequels.

“I’m always a bit reluctant to go back to shows under a different format or guise,” he admitted. “But you never know with something like this, it just depends on the time frames. I think if the quality was maintained. You know, the kind of thought behind it, if it didn’t look as though it was an add-on just to capitalize on earlier success.”